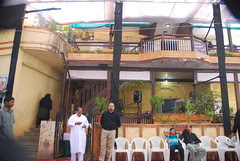 This is a picture I shot in 2009 and father and son , Akthar Imam Saab and and his son Misam, standing at the doors of their house welcoming the Azadars to their house majlis..all roads led to their house as their house majlis is where the message of Hussain is interpreted as living in peace with all communities .
So Hindus Christians even Sunnis flocked to their majlis to savor their hospitality and a generous spread of lavish Niyaz e Hussain.

But tragedy struck this beautiful peace loving family and Mr Akthar Imam Saab passed away on Eid e Mubhaila he was unwell for sometime and we were not aware of this as it was the day my wife was leaving for Karbala. 21 .November 2011.

I met Misam at Kaisar Bagh this Moharam and was shocked about his fathers passing away.. so today was their house majlis and Misam took on the mantle of his father welcoming the azadars all alone , but his fathers spirit was there I could sense it feel it.. and I did not carry my camera and for the first time shot pictures on the emulsion of my beggar poets soul.

I did not carry a camera as I dont know Misam too well as I knew his father as we shared an equation of love respect , and I told this to Misam..

The majlis was well attended recited by Maulana Hasnain Kararvi..the discourse was enlightening  on the message of Hussain and the importance of Namaz ..though arrows kept falling on him by the Yazidi army Imam Hussain upheld the respect of the Namaz ..the spiritual internet server that connected man with God..the essence of Islam of Peace and Brotherhood..

After the majlis  fatiah for the eternal soul of Akthar Imam Saab there was the Niyaz , the fragrance aroma spread as it touched the azadars . and served after the niyaz was hot tasty tea..

So Death  may snatch away our loved ones yet , it cannot snatch the heritage of Hussain , Misam stood for his father and on his frail shoulders he carried the tradition started by his dad..the ladies matam above pierced through the walls taking me back into time back into my childhood at Lucknow Pata Nala Kankar Kua  off Nakhas in the house of my late Grand father Daroga Nabban Sab descendant of Mir Anees ..

The Muslim Man In India Works For His Living 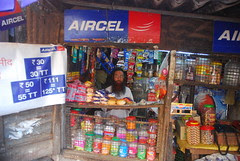 The Muslim Man In India Works For His Living, a photo by firoze shakir photographerno1 on Flickr.

In some Muslim countries , the Muslim man loves killing Muslims and is unforgiving .. 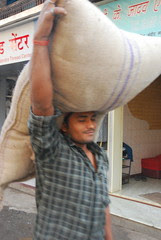 The Happy Happy Man On Happy New Years Day.. The Dead Indian, a photo by firoze shakir photographerno1 on Flickr.
By Firoze Shakir Photographer No1 - January 01, 2012 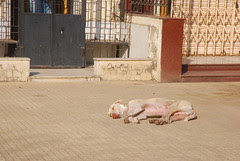 Translated it means I wish I was a dog in a mans world..away from scams and corruption and parliamentary politics that protects hoodlums at all costs..a system that rots the downfall of civic society it plots a janlok pal bill tied up in knots ..

I have distanced myself from erstwhile Team Annas rally simply because as a Mumbaikar , a lover of peace hope humanity I found that it has become overtly political, asking people to protest against government elected by the people and however corrupt the government is , it is the prerogative of the people to vote more intelligently and with eyes open at the ballot box..

I also wonder if the BJP or any other party was in power would it pass the Janlokpal Bill and would Team Anna Hazare have made the same hue and cry .. and I am certainly not a Congress asslicker

Asymmetrically making the opposition win is nothing short of a larger conspiracy.. and so this time I did not shoot the Anna Hazare rally from Juhu to the the Bandra Kurla grounds..

Nor did I have the urge to visit it.. I have lost the will ,completely and we Mumbaikars know what is right and wrong..we read the writing on the wall much before it will read by the rest of Mother India.

And this is not just about only one slap...

So this dog sleeping bought out the turmoil on the first day of New Year.. my restlessness my angst...three days after I had shot him...

Another important factor that prevents me from being photographically adventurous is that I am no more my boss , enslaved to a job that breaks my spirit when I return home dog tired and hit the sack, skipping my dinner ...but not before hugging spending some time with my Malang grand daughter Nerjis Asif Shakir .. she lulls me to sleep.. 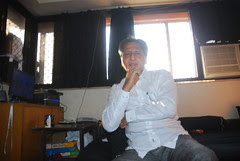 Marziya Shakir Birth of a Gifted Street Photographer, a photo by firoze shakir photographerno1 on Flickr.

Marziya Shakir 4 year old is moody photographer , and will shoot only when she wants to shoot, the camera is a friendly device that makes her happy,. she shoots and I rarely have to delete her pictures , because in her frame she captures what her mind saw , and duplicated for posterity..

But there are times after she has shot me she will tell me bluntly , to shoot her and than pose for her shot..I learnt photography when I was hitting 45..but I was aware of the camera was aware of photographers ..

I knew some of the worlds best photographers in India but never ever thought I would take up photography too.. it happened as luck by chance..


And Nerjis Asif Shakir 5 month old sister of Marziya Shakir knows the Nikon D 80 assisted by me I make her hit the shutter button , and after the shot show her the picture on the camera monitor..

And I am inherently aware that Nerjis Asif Shakir will surpass both me and her sister in this art of capturing images through divine light..

So through a picture shot by Marziya Shkir I pay tribute to Nerjis Asif Shakir 5 month old street photographer of Bandra . 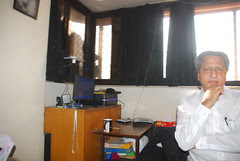 Marziya Shakir my 4 year old grand daughter shoots in her own unique style , what she sees is not important but what she brings to life through her inner vision is the essence of her photography.

I pay tribute to her art through my first blog post of 2012 but not before saying Happy New Year to all of you...from Marziya Shakir and her sister 5 month old photographer Nerjis Asif Shakir

Because I respect my camera for it captures I have bequeathed its soul to both of them.. and if not today perhaps in a distant tomorrow they will be carrying the legacy of my pictorial poetry .. and street art .. street angst.

Floating Dreams of a Dead Poet 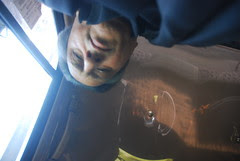 Floating Dreams of a Dead Poet, a photo by firoze shakir photographerno1 on Flickr.
By Firoze Shakir Photographer No1 - January 01, 2012 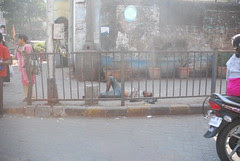 Oh Fuck The New Year, a photo by firoze shakir photographerno1 on Flickr.
By Firoze Shakir Photographer No1 - January 01, 2012