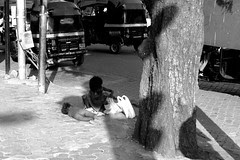 The Traffic of Life and the Beggar Girl 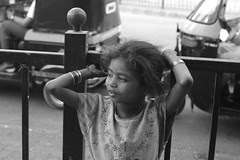 she was first a liitle baby
hanging on a beggar childs waist
she became a toddler much in haste
now as she steadily grows
her vulnerability
in an egg shell encased
like her mother her elder sister
15 years already
with child
she has the bitter
sweet kernel
of life to taste
an aborted childhood
like a moving vehicle
on lifes running traffic
at some other signal
misplaced . 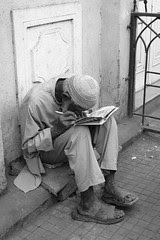 A new lot of Hijdas have taken over the Turner Road Traffic Signal, I met
them yesterday while going to work, Laxmi the Beggar Hijda who kept
this signal running with her kind face has stopped coming here , and I guess
its their head or Guru who controls and tells them where they beg..
The Turner Road Signal is a prestigious begging point, and the arterial road leads to four distinct points of Bandra..
However the Turner Road beggar kids give the Hijdas a tough time moving in for the kill as the kids really are faster on their feet, semi naked and the little tots completely naked.
Their mothers play cards across the road, food is leftovers from the nearby Stomach restaurant. The Eunuchs eat from the street stalls mostly the Bombay staple food called
the Batata Wada ..which is potato pancake in bread and green chutney… 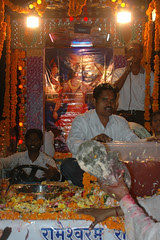 Last week a chariot bedecked with flowers and a huge stone from Ram Setu was on display, the procession was drawn from people of Bandra Bazar Road..
there was a large crowd taking darshan and prasadam..

'Save Ram Sethu' is an international campaign jointly promoted by a growing number of international organizations to oppose the destruction of Ram Sethu, also known as Adam's Bridge. The Sethu Samudram Shipping Canal Project undertaken by the Indian Government will destroy this bridge.

International groups have jointly launched the Save Ram Sethu campaign against the continuing destruction of a symbol of the Hindu faith in the narrow sea between India and Sri Lanka. Ram Sethu ( called Adam's Bridge by the British ) which is seen as one of Hinduism's holiest sites, is an ancient chain of shoals that once linked India's southern areas to Sri Lanka's northwest. It is being destroyed by the Sethu Samudram Shipping Canal Project (SCCP) to create a navigable waterway in the narrow sea dividing the two countries. [more] 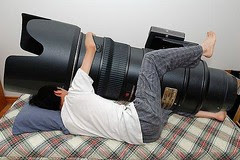 I recieved this and other more hillarious pictures in Gmail Inbox with a link ..
I could have posted all of them but it would go against my ethics of photography..
But do see the link and laught at some of the most funny picture situations..

This one I am using as my poetry subject


*uck you danny reynolds my fight is not with you keep your scottish ass in the kilt it looks better in there ///
you would not want someone to play it like a tabla would you.

Mr Danny Reynolds is a poem hunter member who has been harassing me at Poem Hunter whose remarks to me have been no less than racial slurs..

Email ThisBlogThis!Share to TwitterShare to FacebookShare to Pinterest
Labels: racism in poetry

The Waters of Racist Hate 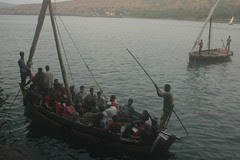 I recieved the following message from Flickr Support I have the highest regard for their
decision and abide by it without any regrets, i may be deleted as a picture here at Flickr but Truth is already easily available on the Internet and can never be choked.
I took up photo blogging to share my world of pictures not to proselytize my religion or my beliefs on others..
I also took up photo blogging as a weapon against Racism, and I need not tell you that it is very powerful and has the greatest strength backed by a collective society of hate minded people..My case in all its humility, a fightthat was at Poem Hunter maded its way to Flickr.
People who treated me racially at Poem Hunter hacked my accounts , had me banned , now moved against me at Flickr, that they were Flick members I never knew, but they collectively placed blocks on me, without me ever visting their photo stream.
I still dont know their identities ,but yes racism , specially White Racism exists and is not a figment of my poetic mind proves it completely in my case.
I am a blogger in transit I will be judged by my actions and my posts will tell you that against my aggressors I habe nothing but words as my defence.
I am a poet of no consequence yet my rise at the top of the spire of poetic fame bought me more brick bats and racist punishment..

This is an automatically generated copy of a warning we sent to your primary email address:

We've seen an unusual number of "blocks" against your
account. Also, we have deleted the kilt photo in which you
inappropriately called out another Flickr member.

In joining Flickr, you agreed to abide by the Terms of
Service and Community Guidelines. Specifically, you must
not abuse, harass, threaten, impersonate or intimidate
other Flickr members:

If we continue to see an unusual number of blocks against
your account, we will likely delete your account.


My reply sent to them by Yahoo Mail


From: "firoze shakir"
Subject: CASE 463563
To: case463563@support.flickr.com
Firstly I have had no problem with any Flickr member I reietrate, the few months that I have built my reputation painstakingly on Flickr, all my poems were replies to attack I recieved at the hands of a few racist members of Poem Hunter site who may be members of Flickr site..
I have never visited any members from my Flickr site to their site..
I have taken much racial abuse and if you keep alluding that I threaten intimidate Flickr members I feel you use these words harshly against me..Even now as I write this everyday at the Poem Hunter I am being thrashed poems written denigerating my character .
I think if people from this group keep blocking me and you take their version to admonish me than I too will have no alternative but to move out from Flickr..a move that would hurt me too as I have more than 14000 pictures posted here of a photo jornalistic nature.. showing a human world of pain and rituals and Hinduism which is my cultural inheritance.
I have from the day I joined Flickr leaving aside theThink Flickr Think poems or Bonk Flickr poem never deliberately maligned the management or Flickr members..I have nothing in my defence I have fought my opponents through my Blogs ...single handedly.
All my poems talk of Poem Hunter racist treatment meted out to me..but I have realised that Racism in a strange way makes the victim the aggressor..
If you unnecessarily knowing what I have been fighting for keep reminding me
"Specifically, you must
not abuse, harass, threaten, impersonate or intimidate
other Flickr members:"
Than it shocks me, and hurts me even the kilt picture as a poem was written against a Poemhunter member has racially continued to trouble me , and still does from the forum that is read by many bloggers and poets.I never in 50 years expected a member of a Scotts race to behave in such a degrading manner..

Tell me by posting any thing to hurt someone what could I gain..
I had to show my pain and my wounds..
If this does not convince you I have nothing to say.I thank you all the same.Merry Xmas
Firoze Shakir.

I will be posting this dialogue as a blog 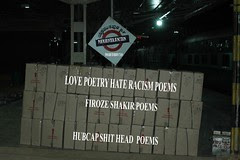 listen@poemhunter says that it was Ferocious Fakir who crashed the lights to delude
...abusive and lewd
no not related to Mahmoud Maksoud or Masood who sell pet food
Closely related to Firoze Shakir with whom the racists had a feud
They sent him packing leaving behind his poems in the nude
In his place to keep Poem Hunter poets entertained with not so funny stories
He has sent Santa Banta brother Edwin Drood
a rascal Indian storyteller very very shrewd “the right step” “dirty pictures” “fastest”as much as he could exclude
“Correct or wrong” poem hunter forum racist asses skewed in foul mood
venomous vituperative vapors imbued a war of words ensued
Funny funny stories to get you screwed served piping hot as racist food
Danny the pisser his little pecker cubically pubically unviewed
To block a brown ass at Flickr with his racist friends he connived and pursued
Louisiana lynching Lass and Betty Strangler he did include
A thought in all its xenophobicness as an attack on freedom of speech
And poetic creativity on love poetry hate racism did intrude
Hogging the limelight the snout of a swine that did obtrude
God is always with the righteous when he is in good mood what say you dude
Edwin Drood the Top 500 poet at Poem hunter I conclude
“Who’s the Ass” I wont allude
A poetic pact the Devil renewed
Metaphorically on the metamorphhhs posterior in menstrual blood tattooed