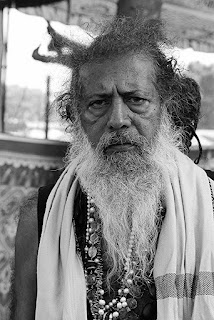 There is another aspect to my Naga Guru that is very different from what he is at the Kumbh or in real life ,,

Shri Vijay Giri Maharaj 13 Madi Juna Akhara performs the ling kriya before every Shahi Snan ...earlier the stick to which he wrapped his penis and the stick was pushed back between the legs that both the hands and the stick rested on the buttocks and on this stick a man could stand with all his weight on the penis of the Naga Guru.

But he has aged so he does carry extra baggage on the stick and I have posted his Ling Kriya videos on You ube but here at Flickr the images are restricted to public because f frontal nudity .

However during Navratra Shri Vijay Giri goes into a trance and becomes the voice of the Devi.. they dress him as a woman with bangles etc.. this avtar of his I have yet not seen though I have been shooting him since 2004 ,,, 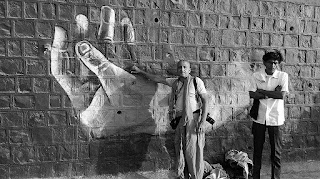 A story my childrens children to their childrenwill recount ,,a great great
grandfather ,,,died with his
dreams with no money
in his bank account ,,
a story if remembered
his critics will discount
incorrigible romantic
his hopes dashed
on the Venus of her
Mound ,,what goes
up must oneday come
down a tale going
round and round
By Firoze Shakir Photographer No1 - May 10, 2016