I Get Ready For The Shahi Snan 15 Feb Basant Panchami 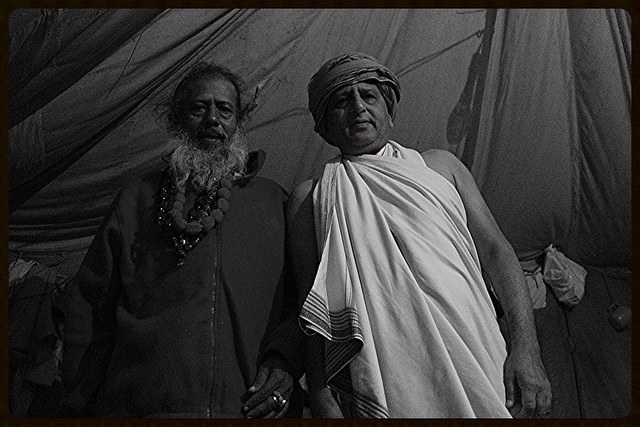 Considered one of the holiest places in India, the Sangam is where the sacred rivers Ganga, Yamuna and Saraswati merge.

I was with the procession of Nagas led by Sant Avdesh  Anandji...and we were ready since 3 am..

This was the greatest experience and taking the dip in the Sangam with my Naga Guru.. meeting some old photographer friends like Laurent Salles ,,

Because I was with my Guru I could not break  away from him ,I  left all photo opportunities and walked back with him to Sector 4 Juna Akhada .

And I had no regrets the dip in the Sangam was cool refreshing ..and I forgot it was Winter ,,I was barefeet like the rest..

Email ThisBlogThis!Share to TwitterShare to FacebookShare to Pinterest
Labels: I Get Ready For The Shahi Snan 15 Feb Basant Panchami, sangam 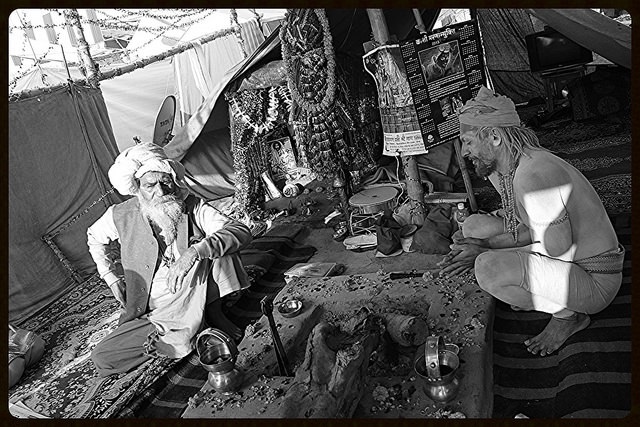 The origin of Kumbha Mela lies in the beautiful story of the time when the gods and demons churned the ocean in search of the nectar of immortality.

The fight between good and evil has existed from time immemorial.  According to the story, the demons were always fighting with their brothers, the gods.  However, the gods did not want to fight; they remained peaceful and calm.  This did not deter the demons from killing them, though.  Hence, the forces of good were falling to the forces of evil.  One day, the devas went to Lord Brahma and said, “We are losing so many of our brothers and sisters in the never-ending war with the demons!  If this continues, none of us will be left.  Please help us!”  Lord Brahma told them to go to Lord Vishnu.

Lord Vishnu listened to their story and sympathetically responded, “If you churn the great milky ocean, you will find a gold pot of nectar.  He who drinks this nectar will be blessed with the boon of immortality.  However, you are not strong enough to churn the ocean yourselves.  You must attain the help of your brothers, the demons.”

The gods were in great distress.  “But, Lord Vishnu,” they said.  “If the demons know that the reward of churning will be immortality, they will take the nectar all for themselves.  Then we will be in even more trouble!  Alternatively, if we hide from them the reason, they will never agree to help us.”

Lord Vishnu assuaged them and told them to simply go and request help from the demons.  So, the gods left the abode of Lord Vishnu and successfully convinced their demon brothers to help with the task.  The churning of the great milky ocean by the gods and the demons became a momentous event.  The snake Vasuki offered himself to serve as the rope required for churning, and Lord Vishnu Himself became a huge turtle on whose back they could easily churn.

So, the fantastic churning began with the hope of divine nectar filling the minds of the gods.  However, after a great deal of effort, what emerged was not nectar, but poison!  The gods and demons knew that in order to continue churning, they could not simply toss the poison aside.  Someone had to drink it.  So, a conflict began.  Who would drink the poison and thereby allow the historic churning to continue?  No one would agree to sacrifice himself, until Lord Shiva came forward and said, “I will drink the poison if it will preserve peace and enable my brothers and sisters to attain the nectar of immortality.”  The sacrifice Lord Shiva made an example of why He is Maha Deva and all the other gods are simply devas:  this selflessness and dedication to the welfare of others.

After more churning, at last out of the murky waters emerged fourteen precious jewels, including Goddess Lakshmi, Kamadhenu (the wish-granting divine cow), along with many other treasures.  At the end, Lord Vishnu Himself appeared, holding the precious Kumbha in His hands.

However, Indra – the King of the gods – knew that the demons were planning to abscond with the treasure of immortality.  So, he immediately signaled to his son, Jayant, who lept forward, grabbed the pot of nectar and quickly ran away.  The demons, however, were stronger and quicker than Jayant and they pursued him relentlessly.  Indra sought aid from Jupiter (Guru), Surya (the Sun), the moon and Saturn to protect his son and preserve the Kumbha.  The long chase lasted twelve days, which was the equivalent of twelve years on Earth.  During this chase – which traversed the realms of the Earth, the heavens and the moons – Jayant rested only four times.  While he rested, he placed the Kumbha on the ground and a few drops of holy nectar spilled onto the Earth in each place.  It is these four places that have now become the four centers of pilgrimage for the Kumbha Mela.

Email ThisBlogThis!Share to TwitterShare to FacebookShare to Pinterest
Labels: The Maha Kumbh Origins

The Kumbh Mela The nectar – or knowledge of divinity 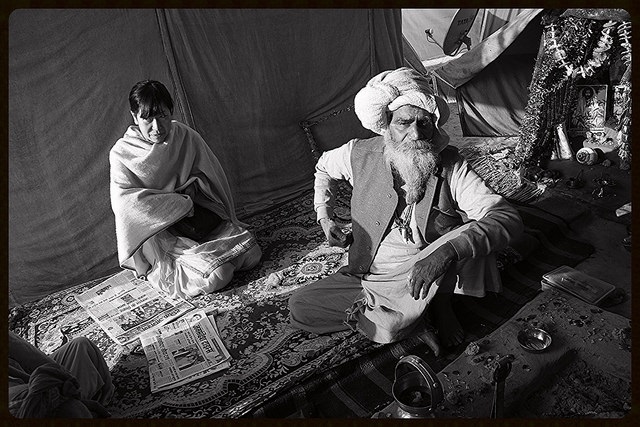 
We live in India but are restricted to our own religiosity , our own blinkered ideology,and the Kumbh is not just a Hindu event , it is a universal appeal of cleaning the mind the soul through purification in the Ganges , as in the case at Allahabad.

Behind the camera the world is not just Hindu Muslim Christian or Buddhist , it is a complex chimera waiting to unfold , and this is why I shot the Maha Kumbh , through the eyes of a curious world.

Without ignorance but with the camera deciphering every expressive nuance that touches people who come here to seek peace Nirvana and Moksh.

The Kumbh a world away from chaos , yet there is chaos even from themoment you step out of the train hire a rickshah to take you to Sector 4 the heart soul of the Nagas.

The unintelligent cacophony of the crowds , the hurry a march against time , and if you watch the processions of the various Askhadas led by the Naga Sadhus of Sant Avdesh Anandji..you are caught in a time wrap..

My desire was to shoot the Mauni Amavasya but I could not get tickets , I was financially unprepared , I had no friends in Allahabad , but than an invite by my Naga Guru Shree Vijjay Giri Triveni Juna Akhada gave me hope , I was carrying just about Rs 4000, shalwls , coverlets to distribute among the poor , what money remained I handed it over to my Guru for his kindness hospitality ,,

I returned to Mumbai without money but happiness and the pictures I had shot , there are some pictures marked private such as the Hijras taking a dip in the Ganges , and pictures of a person I met who later died tragically , in Mumbai , she touched a lot of people a lot of souls though she was going through her own pain turmoil.. out of respect to her Memory I have kept her soul alive privately.. hope to meet her parents one day and hand over the pictures to them.. this was the saddest part of my Maha Kumbh..

I never got over it.. I met Chandrasawamiji, Shri Chetan Vaidyaji, the Sabapatis , and Shree Avdesh Anandji ..and other Gurus of the highest Naga hierarchy and Imet the greatest Guru of Photography Mr Raghu Rai..

The above Sanskrit shlokas tell us that the trinity of gods – Brahma the Creator, Vishnu the Sustainer and Shiva the Destroyer– in addition to all the Goddesses, Mother Earth with Her seven islands, and all knowledge in the form of the Rigveda, Yajur-Veda, Sama-Veda and Atharva-Veda exist in Kumbha.  Thus, Kumbha is the symbol of all that is, and all that exists.  The Kumbha Mela is a celebration, a festival of the glory of Kumbha.  It is a celebration of all knowledge and all life.

Kumbha Mela stands for the source of divine beauty and knowledge.  Since time immemorial, the Indian and Hindu cultures have been concerned about the welfare of the entire planet.  Even in the mythology, the Kumbha Mela meant distribution – not hoarding – of the nectar.
By Firoze Shakir Photographer No1 - June 19, 2014

Email ThisBlogThis!Share to TwitterShare to FacebookShare to Pinterest
Labels: The Kumbh Mela The nectar – or knowledge of divinity 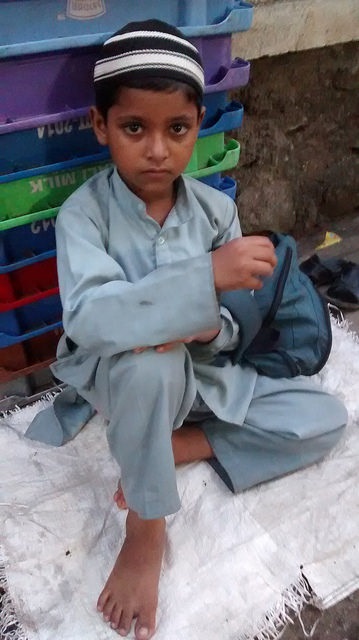 I was at Santa Cruz and I spotted him , I completed my work and gave him some money and shot two frames , people wondered why I was shooting him , ever curios Muslim sitting on a bench , i gave them a smile and moved on cutting through slums to take a bus back to Bandra.

See his eyes .. read them as you would a book , and there is so much depth anxiety and what is his future , it is not better thn the guy who repaired Mr Modis cycle when he was a kid and now , the cycle repairers soon is also in the same trade ..
so pardon me a beggar will his son be a beggar too.. I have no answer unless society , the Muslim madrsa and Mosque building dudes at the drop of a skull cap , build his future that would be help to the community and the country .. as a bigger picture.

Now dont condemn me for shooting Muslim beggars I am still trying to find a Parsi beggar ,, forgive me Ms Najma Heptullahji Gustaki Maf.
By Firoze Shakir Photographer No1 - June 19, 2014