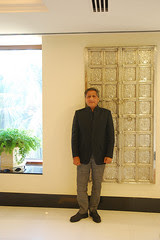 82428 Views on My Flickr Photos on 26 May 2012-I Am Back From Ajmer And Pushkar, a photo by firoze shakir photographerno1 on Flickr.

I have just come home .. my return journey from Ajmer was nothing short of a nightmare , I was 547 on the waiting list and when I entered the Ajmer Bandra Terminus Express I was 251 , I hung on and finally managed to get some place on the floor of the compartment and like a beggar I travelled in a overcrowded fucked Indian Railways train ,the westernstyle toilets were occupied by passengers and it was one hell of a journey I feel sorry for the pilgrims cheated by the Indian Railways no TC came to control the chaos there was an ugly fight and I for the first time I did not shoot in the train..

This documentary began on 26 May and I just saw my Flickr blogstats ..I dont have hijra pictures that once attracted about 20000 visits to my site every day, than once I found out that Flickr members were stealing my pictures I rmoved all my hijra sets blogs poem from the genearl public..
Only those who know me personally , those who I add as friend can see all these pictures at Flickr.com.

I stayed with Peersaab Fakhru Miya Hujra No 6 my host.

I met my Dam Madar Malang Peer Baba Masoomi Baba at Char Year refueled my spirtual pledge as a Dam Madar too..

I shot beggars I shot the Chatti celebrations at Peersaab Fakrhu Miyas house and at his Hujra no 6.

I shot the hijras of Ajmer extensively .. I shot Raveen Kamini I shot Mona the child eunuch, I shot Naina and another child eunuch Mahi..

I shot the Hijra sandal their dance and I was carrying my grand daughter 's Canon EOS 60D..

I shot the Rafaees I gave an Antique agate necklace to Noubat Ali Baba the head of the Rafaees at Char Yar .. he was deeply touched.

I fed the poor I placed chadars for my close friends at the Dargah..

I climbed the mountains to meet a very cultured educated Malang Baba Wahid he walks with his group of Malangs from Kolkatta to Delhi and from Delhi to Japur and from Japiur to Ajmer Sharif..

My Malang brother Marc De Clercq walked from Jaipur to Ajmer this time there was a Polish photographer and an Argentian photographer walking with the Malangs.

The Polish guy I met at Char Yar he is shooting Sufism and the Malangs on film camera and point and shoot.. unique photographer with Shiasm symbols tattooed on his arms ..

I also went to Brahma Mandir Pushkar to pray for my Hindu froends but could not carry my camera within the Temple .. and I did not know who to trus with my camera I did darshan from outside the gates shot a lot of street nd bought a very sharp Daggar from a guy called Tilak at Pushkar to cut my head during the Moharam ritual of Ashura and Chehlum.

I missed my Pushkar friend Niru also known as Niru Bullet he was in Thailand bought some funky earrings to push into my ear holes.

I shot the ghats with some guys from Banaras.

So this is merely an Introduction to my Ajmer Urus 2012.. I have to download the stuff ..and I am using an old picture as a fashion maker to tell the story of my other life as a Fakir a Malang and a beggar ..

I am back in Mumbai ..back into commerrce and chaos.

My granddaughter Fatima was excited to see me .. but the other two Marziya Shakir , Nerjis Asif Shakir come from their holidays tomorrow.