Appu and Marziya Tryst With Destiny

This is for the furious physician my trusted brother and Marziyas god father Dr Glenn Losack MD ..from Manhattan New York .

Since last few days I had thought of bringing Marziya Shakir my 23 month old grand daughter and Appu my best Friend face to face..Appu is a set on Flickr a very precious set of a person without limbs who walks tall, and made me go barefeet for life..

I normally dont take Marziya very far , mostly in and around Bandra , but I put her in a cab and reached the spot where Appu sits, I did not show Marziya - the form of Appu , I came from the back but Appu saw me and gave me a smile , I gave Marziya Rs 20 and than told her to go give it , without pointing to Appu..
Appu watched all this from a distant .
Marziya was a bit confused looked around , spotted Apu and without hesitation went towards him to give him the money , but Appu has no hands and she kept wondering, but she never looked back at me ,,, this was Marziyas first meeting with life , a life called Appu , her second lesson in Charity after the Umbrella lady of Bandra Reclamation..I called Marziya and told her to place the money in his bowl, while he patted and blessed are with his eyes.

Appu and I are friends since almost 9 years or more I am bad with dates ..his earliest pictures I shot on film.. at Chor Bazar a market I visited every Friday once upon a time..
Shooting Appu creates a crowd and traffic problem as he sits on the road , and the entire area gets unmanageable , today being the St Michael Novena and a weekly market day for the pilgrims and devotees,I took some more shots and making Marziya walk some distance hopped into a cab back home and ended shooting two rallies of Baba Siddiki Congress I and Rahebar Khan Independent candidate that passed by my shop.
All this while Marziya hung on my waist I had fortified her with Orange juice.. and given her later to my shop help.

Marziya shot the rally to assisted by me ..and I dont know what she sees in the viewfinder but her pictures and mine are almost identical...I help her press the trigger though..

The Milk of Kindness Called Mumbai 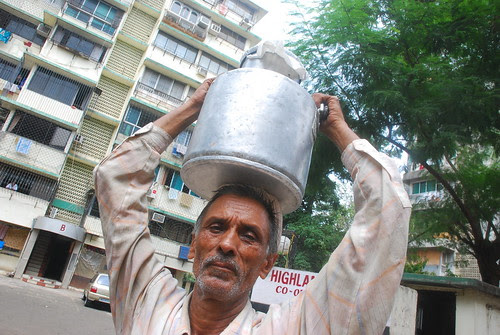 He sells fresh goat milk and told me that it was from a newly goat mother , the first dhar ..and that it cures a lot of illness , and he is a North Indian migrant churning his dreams , saving money sending it to his family in Uttar Pradesh.

And unfortunately he is at crossfire , here in Mumbai his Indianess is questioned , and he is politically hammered for no fault of his , and back at his hometown the government of his State builds statues on the corpse of his ancestors ..statues that crows will shit on , statues built by people much poorer than him, to aggrandize the ego of political bigwigs at the expense of the exchequer ..

The poor migrant of Mumbai is in a homeless and hopeless situation a pawn on a stinking chess board of politics...

He is the quintessential soul of Mumbai.. Bombay has become Mumbai , but the Bhaiyya will always be a Bhaiyya ..the concrete , the iron in the soul of this vibrant city.. a cauldron of all cultures..

Now meet him again as you hire a cab or ricksha towards your home bound destination...

Before you drop a coin to another migrant beggar blind in the eye dreaming of hopes in this city of Peace and Brotherhood.

Neil Six Pack and Me 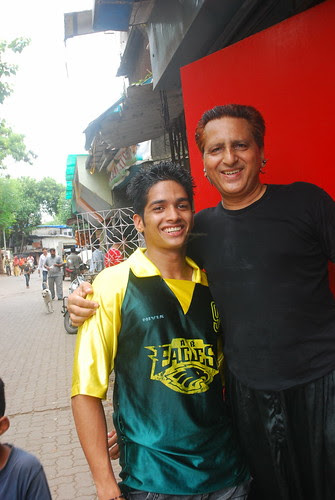 Neil stays in the neighborhood , and is the Christian face of the BJP Party at Bandra Reclamation, he is an ardent hardcore supporter of the party , and his smiling face is in the forefront during most of the events like Ganesha Chaturthi, Gokul Ashtami hosted by Advocate Ashish Shelar candidate of the party for the forthcoming Assembly elections.
This time he is canvassing for his leader and hardly has time , he is unemployed too , and is studying also.
He works out at a local gym, and loves to show of his eight packs to the smaller kids, who in return laugh it off as mere six packs , some cheeky ones call him four pack Neil.But Neil is a fun loving guy , a go getter, sincere honest and helpful.
He lives among Muslims and speaks their street lingo with ease.

He dreams of becoming a Mumbai Police Inspector and beating the shit of criminals..

He is taller than me so I stood one step higher on the raised platform, to appear taller than him and he is laughing at this mischievously...

A Shia child carries the credentials of Faith embedded in Hussainiyat.

From the day she has was born Marziya has intuitively shown a sudden surge towards the faith she has inherited as a Shia child.

I have shown Marziya all religiosity every time she accompanied me for a shoot ..but it is her faith that she follows with a frenzy , we are liberal Muslims , modern to a certain extent living in mutual compatibility with everyone else.

Marziya has been bought up by her parents who are less adventurous than I am towards other religiosity..Her father a soft ware programmer is a Shia scholar and a teacher .Her mother a devout Shia housewife from Kazmain Lucknow ..

We have been Mumbaikars as Mumbai is our home and our destiny.

Marziya has never seen a Moharam procession, never seen any blood letting that is part of our ritualism, but she has attended majlis, ladies majlis..

She has seen me come home with a bandage on my head but it never bothered her , the dagger I use to cut my head during Ashura or during Chehlum does not belong to me , I use the same one that is used by others too, all belonging to my good friend Habib Nasser pioneer of the Iraqi Kama Matam in Mumbai.


So Marziya took me by surprise while sitting on the dining table , she picked up the butter knife and began slashing her head , to the chant of Ya Hussain...this was many months back, and she did it again in the kitchen this evening.

At my house its only me who cuts his head , my children dont partake in this ritual.
So Marziya does things that I cant explain , this was important before you misinterpret my following pictures.

I shot all of them this evening , beginning with this one where Marziya is reciting a Noha and beating her chest chanting Ya Hussain in her baby lingo..