The Three Brave Boys of Bandra 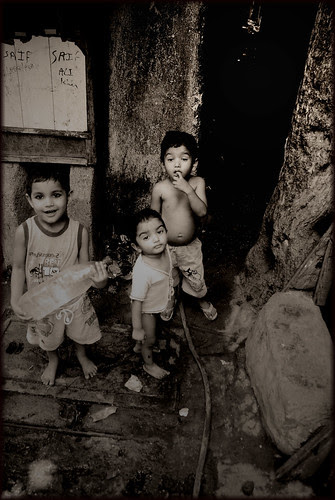 I like this photo Firoze...The smile on the face of the boy with the bottle is very nice. He has a good feeling about him...like he can handle whatever troubles life brings.

The Future Of These Kids I Could Not Shoot 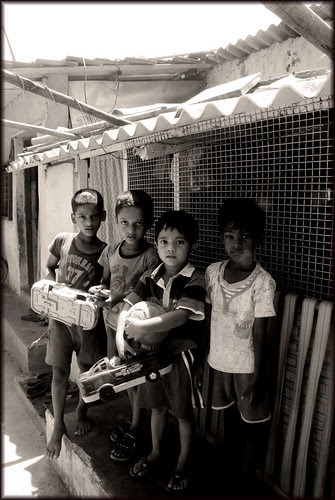 The Future Of These Kids I Could Not Shoot, originally uploaded by firoze shakir photographerno1. 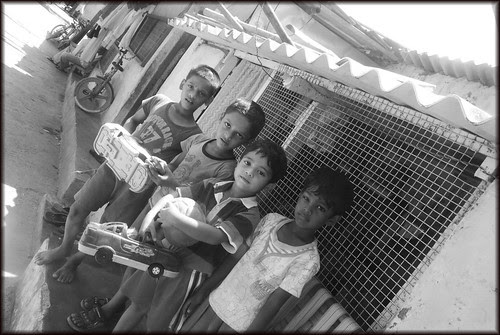 The Gutter Flows Through The Slum 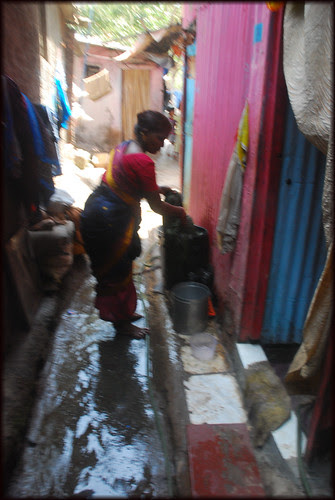 The Gutter Flows Through The Slum, originally uploaded by firoze shakir photographerno1.

What Lens Do You Use ? 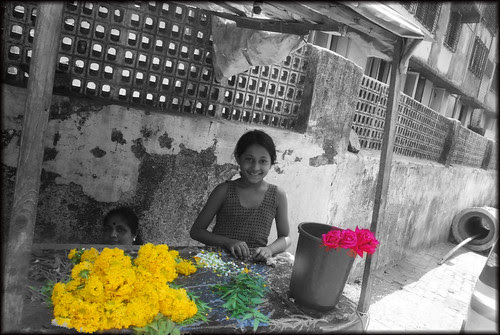 What Lens Do You Use ?, originally uploaded by firoze shakir photographerno1.

This was a question posed by a person to a celebrity photographer on Facebook.

And I wondered about the naivete of the person , before the camera or the lens takes the picture it is the mind that captures it on your soul..

The body is a camera and I wont go into scientific details.. the lens is Shivas third eye embedded deep into your foreheads karmic consciousness..pictures are shot here..

There was a ad in the newspapers learn to click snaps at Rs 7500 in three days , this is photography served as a Thali.. makes me throw up..

Photography should be made a compulsory subject in school and colleges as it is a holistic healing instrument of peace.

You dont need to run after pictures , pictures themselves fall into your laps,but you must have an eye to see the ordinary..the ordinary picture steal our own emotions, as I raised my camera to eye level this little florist girl looked at me curiously than before I hit the trigger she gave me a gift of a smile..

There was no need to tweak this picture I shot it in color , but I used the extract tool to add poetry to what I shot..I gave back life to the flowers as they will touch the mortal soul of god , and I desaturated the rest of my picture , so you could see the power of a smile that heals..

I dont crop my pictures I use wide angle , the pipe in the picture is the path that leads to a light in the tunnel of despair.

So street photography binds me with my surroundings , I shot a lot of stuff on this card, and I dont discriminate I shoot what appeals to my soul, I shoot selfishly yet I share it with all of you..

For me street photography is the mother of all photography , and here it is a vast genre to document , it covers all the feasts and festivals on the roads, the pain and the sorrow , hope and tomorrow , the head cutting the scourging the Moharam processions, Lalbagh Cha Raja his last journey, Durga Visarjan, Raafaee body piercings on the road..the road piercings or Maryamma feast of the Hindu Tamils , and something or the other is happening like the Stations of the Cross on Good Friday , the Hijra procession or Sandals at the Dargahs..

And of 123681 pictures I have posted as blogs at Flickr I can tell you that over 75% is nothing but street photography.


And in another one hour I go to Colaba to meet one of the most energetic , fascinating photographer Laurent , he is a visionary, a poet and a realistic dreamer of broken dreams too..
He is a Frenchman and a lover of my country ethos..

Yes is a street photographer too..

There Is No Doubt About It Your Service Sucks 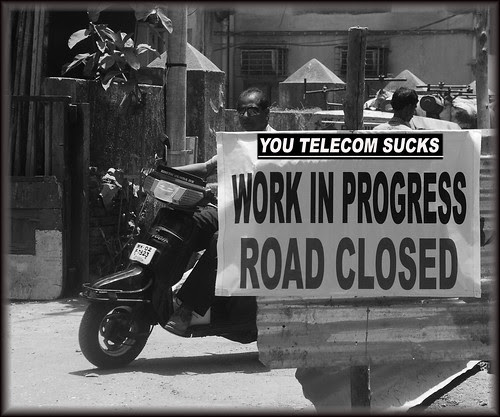 There Is No Doubt About It Your Service Sucks, originally uploaded by firoze shakir photographerno1.

Message sent to their Customer Care

And it is a fact I have no other agenda, I pay for a service that is pathetic, unapologetic when you fail to connect , neither do you compensate for the outage..I am an existing customer since six years I think you have reached a saturation point , you want more connections more money but you do nothing for the customer who subscribes to your service..

And you get a sadistic pleasure making us suffer and in India there is no authority that can reprimand you for your grave shortcomings.

Please tell me if I am wrong..

My net went dead at midnight and after 4 hours the connection is still bad.

The Pain of Losing a Loved One 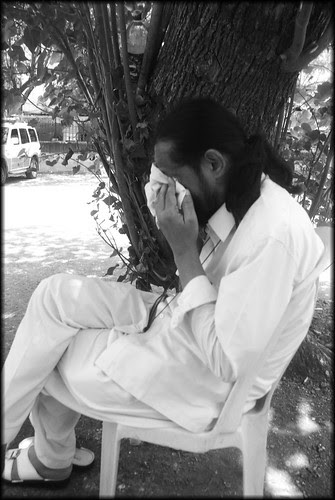 The Pain of Losing a Loved One, originally uploaded by firoze shakir photographerno1.

What joins me to you and you to everyone else beyond caste color or creed is the magnanimity of pain, the humility of pain , pain is the common denominator, pain touches us all , there is no escaping pain or death for that matter both walking behind each other.

I shot this picture today, I could have shot it at the Shia cemetery too, but I am a poet as much as a human being and I am a father of a daughter too..so though I had my camera on my person I lacked the instincts of a photographer at that moment, when this gentleman sat on a bench weeping bitterly , he had come to the graveyard to bury his 21 year old daughter Kulsoom.

I offered my condolences like everyone else , I knew I would blog this sad episode , but I was reprimanded by one of his relatives for taking a photo of the gents offering salam in the courtyard , I was rudely asked to keep my camera away, the relative being a enormously huge personality , I placed my camera in my bag, and distanced myself from the funeral proceedings, as this was a child's funeral I was only a neighbor of the bereaved father who has a magical equation with my grand daughter Marziya..

I was here on the insistence of my wife I avoid funerals and burials completely.


I asked my wife to hasten our departure from the Shia cemetery, as this was a very sad day, the minds were upset , as the Rizvi family had lost three members in two days, first it was Salman Rizvi whose obituary I had already posted here and at Facebook and at my other websites as I had a cordial relationship with him,after he was buried , the following day his aunt expired and the Rizvi family was once again back at the cemetery completing her last rites, barely had they buried her and returned home, on the same day at 4 pm Hyder Bhais daughter Kulsum breathed her last, she had been ailing for several years..she was 21 years old and this was a great tragedy and a great personal blow to him as a doting father .

Hyder Bhai had left no stoned unturned availing the best treatment for her, several operations but he did not give up hope, this very devout humble Shia Muslim father and my very good friend.

As my earlier workplace was close to his house he shared his life's problems with me and became absolutely attached to my granddaughter Marziya.

It has taken nearly 4 hours to write this painful obituary simply because You Telecom by Internet service provider went dead , what I had written all disappeared , as I had not saved it, if there is anything worse in my life as a blogger it is simply the ruthless bad You Telecom service..

I met Hyder Saab yesterday he wept bitterly , I told him he had to be tough and relive for his other children , he held my hand and I wept too.

This picture I shot today as he sat beneath a tree in his building compound..so why does a photographer take pictures , I dont sell pictures , I have no commercial agenda, a poet photographer tales pictures to share pain , to share the intimate moments of life when death intrudes on our loved ones , breaching the walls of safety.

I could have taken a picture from the several I have at Flickr of him and my grand daughter , even the picture I have of the big shot and the majlis at the cemetery by Maulana Hasnain Karari.. bit I waited to capture this moment and poetize it on your soul, so you understand the assault of pain on a bereaved fathers heart and soul.


My wife to has suffered a blow on the day she attended Salman Rizvis burial her best friend Hashmi died , they were in school together in Lucknow , and my wife attended the remaining two burials of the Rizvi family too.

So Death does touch us though we may not be related to the aggrieved family.

Marziya is a very friendly girl. She exhibits learning and sharing tendencies.