The Life and Times of A Cobbler 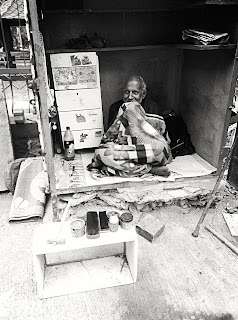 He has a small box of a stall at Bandra reclamation close to the municipal park and we bond as I pass him to play tennis at the MET gardens ..I inquire about his poor health ..for many months his stall was shut as he had gone to his daughters place for recuperation and recovery .
I have a cosmic relationship with cobblers the lowest rung in society those days when people called them Mochis .
My first cobbler friend was a guy who sat outside my school Private European school opposite Usha Sadan if my mom was late in picking me up I sat at his stall ..it was 1955 and memories of this school my European teachers Mrs Lester Miss June and Miss Marjorie are still alive .
But I digress this story is about the cobbler I have another cobbler friend at Bazar Road Poonam we get along very well he sits at the end of De Monte street ..and most of these cobblers are related .
The cobbler at Bandra Hill Road near my old working place was proud that his son was studying at Rizvi college...he will ask me to share a cup of tea with him when I nostalgically pass his way .
And I met another cobbler through Poonam this guy has a stall at Bandra Station road and makes hand made shoes in soft leather I had given him my military boots for repairing as the hard leather edges were hurting me he was asking a lot of money but I settled for Rs 200 he will line the entire boot with foam or soft material from inside .
He had some nice soft shoes his main karigar is a old man a Muslim from Agra ..who was stitching up a new pair of shoes with his hand
So now as I end my street story I wondered did Mayawatiji think that the cobbler dhobi sweeper need ugly park with statues and ugly elephants instead of progress development and these monstrosities are competing with the Bada Imambada and other monuments built humbly by the Nawabs of Avadh.
In short politicians who posture as saviors of the dalit have become multi millionaire done nothing for them.
My cobbler friend will live die a cobbler ..this is his cosmic fate when if he dies his wife will manage the stall.
By Firoze Shakir Photographer No1 - February 02, 2016 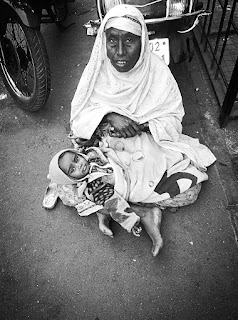 I have known her for many years she stays in the roadside slums at Lal Mitti Bandra reclamation .
She used to beg with another child in my area and sometimes outside the Shia Khoja Mosque Bandra Bazar Road.
However I shot her with this new child outside the mosque at 7.30 am while going for tennis I mostly cut through the mosque backlanes
sometimes .I spoke to her this is her new grandson I gave her some money ..I had no time to shoot her video in order to make this street narrative more colloquial ..make you listen to her story and the power of her grandchilds eyes that held me in a vice ..he penetrated the poetry of my restless soul.
And this is my genre Muslim Beggars God forgot ...was it part of his cosmic plot ..here they suffer outside his spiritual mansion they beg whine rot ..at fajr prayers on the dot .
Accidentally this picture I shot on the Soul of Humanity a cancerous incurable blood clot ...with her grandchilds cosmic eye and the third eye of Shiva two entities that fought ...time and fate watched me from yonder said now what ..
Some cake some biscuits for her child from the bakery opposite the mosque I bought .
The power of a grandmother and that mystic tiny tot .