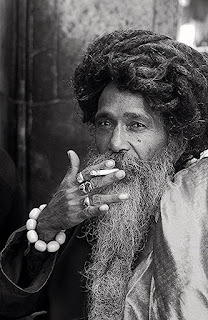 I started shooting the Rifai Silsila about 18 years back followed them from the Urus of one Holy Saint to the other ..and those early years it was tough shooting them as they were wary of the camera , and the camera left nothing to the imagination , it caught them smoking hash..that was the integral part of their spirituality ,,

Than every year since 2005 I started shooting the Madarriya order of the Dam Madar Malangs of Ajmer ,, and than finally in 2011 I decided to become a Malang too,, along with a Belgian friend and there was no looking back I became part of the Aqsan order of Madrriya malangs affiliated to the Holy Shrine of Zinda Shah Madar Makanpur ,, I made one trip to Makanpur during the Urus of Zinda Shah Madar 2013 and seriously began documenting Madarriya life style rituals and culture .
By Firoze Shakir Photographer No1 - November 20, 2015