Mr Gopinath Munde..He Leaves Behind His Imprints On The Soul Of Humanity 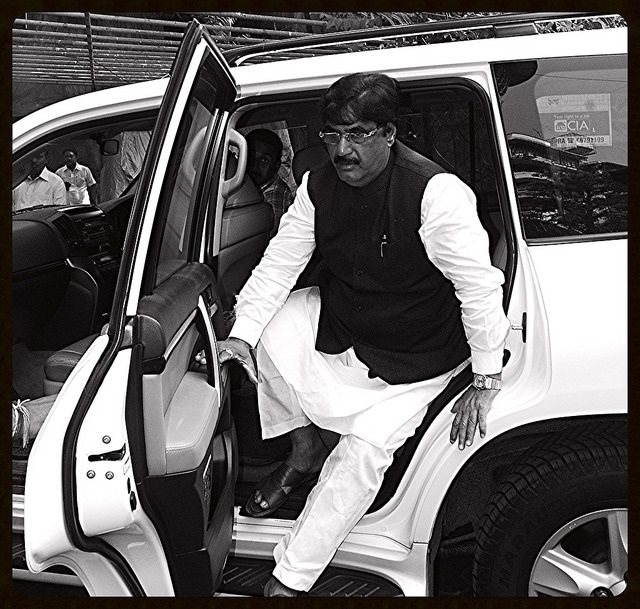 Email ThisBlogThis!Share to TwitterShare to FacebookShare to Pinterest
Labels: bandra blogs, Mr Gopinath Munde..He Leaves Behind His Imprints On The Soul Of Humanity 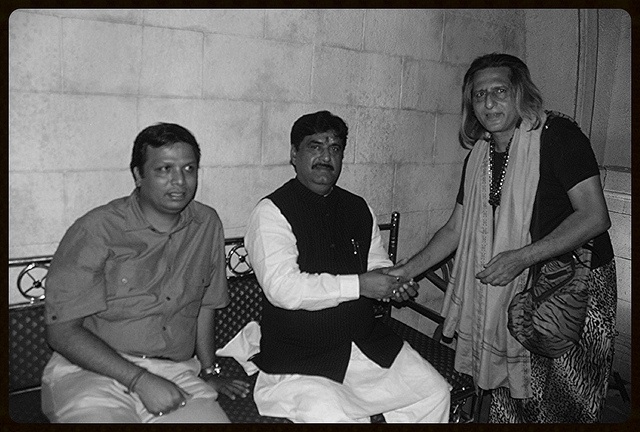 I have been shooting documenting Hinduism as my cultural inheritance , and Advocate Ashish Shelar has encouraged and helped me the most , I shot the Nasik Kumb and The Maha Kumbh Allahabad .

And I have been shooting all the main Ganesh Pandals in Bandra including Lalbagh Chya Raja and GSB  Ganesha King Circle all the Hindu feasts that touch Mumbai.

I also shot the funeral procession of Late Bala Saheb Thackeray and as a blogger added to the tapestry of peace hope humanity .. the Ganga Jamuna Tehzeeb that is part of my ancestral heritage.

This was  one such memory that I share with all of you thanks to Advocate Ashish Shelar... 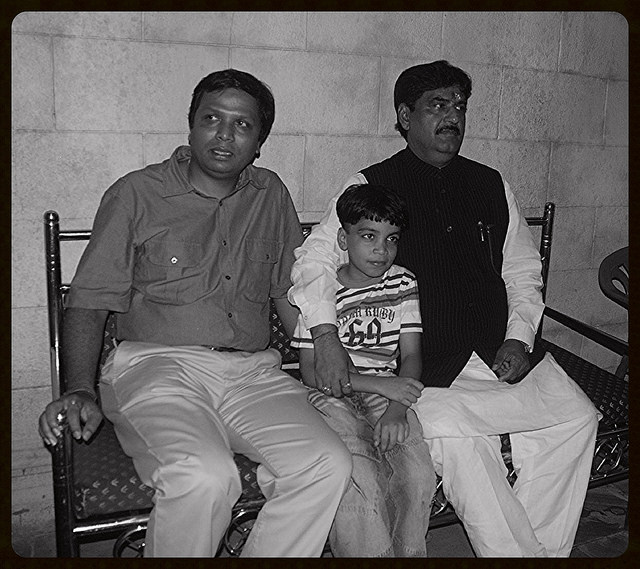 Mr Gopinath Munde Sab visited Advocate Ashish Shelars Ganesh Pandal every year , and such was his humility he blessed the kids , shook hands with Bandra BJP Cadre ..volunteers .and these are memories stored away on my Flickr photo stream..

He will be missed by everyone cutting across partlines .
By Firoze Shakir Photographer No1 - June 03, 2014 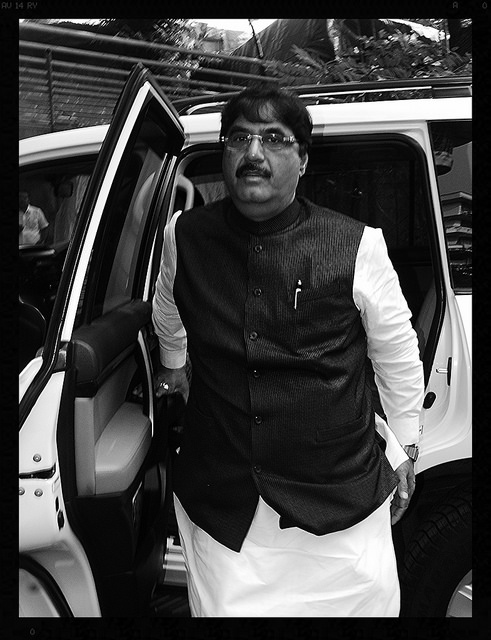 This was shot by me during Mr Gopinath Munde Sabs visit to Highland Court Bandra a very long meeting at Advocate Ashish Shelars house .

A huge crowd waited for Mr Gopinath Munde Sab  a messiah of the poor and a mass leader .

He was humble blessed the people and shook hands with the Bandra BJP cadre and volunteers .

I offer my condolences to his family to our MP Ms Poonam Mahajan hope God gives them the strength to bear this irreparable loss , a loss for our state and our Nation,.

Ambox current red.svgThis article is about a person who has recently died. Some information, such as the circumstances of the person's death and surrounding events, may change as more facts become known.
Gopinath Munde
गोपीनाथ मुंडे
Gopinath Munde
Minister of Rural Development
In office
26 May 2014 – 03 June 2014
Prime MinisterNarendra Modi
Preceded byJairam Ramesh
Member of Lok Sabha
In office
2009 – 03 June 2014
Preceded byJaisinghrao Gaikwad (NCP)
ConstituencyBeed
Personal details
BornDecember 12, 1949
Nathra Village, Parali
DiedJune 3, 2014 (aged 64)
New Delhi
NationalityIndian
Political partyBhartiya Janata Party
Spouse(s)Pradnya Munde
ChildrenPankaja,Pritam,Yashashri
ProfessionPolitician
ReligionHindu
WebsiteGopinath Munde Web
Gopinath Pandurang Munde (12 December 1949 – 3 June 2014) was an Indian politician from Maharashtra. He was a senior leader of the Bharatiya Janata Party (BJP). He was a Member of Legislative Assembly (MLA) for five terms during 1980-1985 and 1990-2009. He was also the Leader of Opposition in Maharashtra Legislative Assembly during 1992-1995. He has held the post of Deputy Chief Minister of Maharashtra in 1995-1999.[1] Munde was elected to Lok Sabha in 2009 and 2014, and served as the Deputy Leader of the BJP in the Lok Sabha. He was appointed as the Union Minister for Rural Development and Panchayati Raj in Narendra Modi's cabinet.

Munde's wife Pradnya is a sister of late Pramod Mahajan, a senior BJP leader.[2][3] His family included his eldest sibling, sister, Saraswati Karad, elder brother Pandit Anna, who is actively involved in social and political work. He was the third child in the family. He has two younger brothers, Manikrao and Venkatrao.

Munde had three daughters — Pankaja, Pritam and Yashashri. Pankaja is an MLA. Pritam is a doctor, and Yashashri is studying law.[2]

Education[edit]
Munde attended a government primary school, in Nathra village, Beed district where classes were conducted "under a tree". He later attended the Zilla Parishad high school in Parali. He obtained a BA in commerce from college in Ambejogai.[2] Subsequently, he studied at the ILS College in Pune.[4]

After Gopinath Munde became Rural Development Minister in 2014, controversy erupted over his educational qualification. According to the affidavit submitted to Election Commission by Munde for the Lok Sabha elections, he graduated from New Law College, Pune in 1976 but the college was established in 1978. [5]

Political career[edit]
Munde got involved into Politics when he met Pramod Mahajan, a friend and colleague in the college.[6] As a member of the Akhil Bharatiya Vidyarthi Parishad, he took part in the agitation against the state of emergency imposed by the Prime Minister Indira Gandhi. He was incarcerated in the Nashik central jail until the Emergency was lifted.

In 1971, he associated with the campaign of the Bharatiya Jana Sangh candidate in the Lok Sabha election in the Beed constituency.[citation needed] He attended the Rashtriya Swayamsevak Sangh's Shiksha Varga (Training Camp) held in Pune that year. He soon became the Sambhajinagar Mandal Karyavah, looking after half a dozen shakhas of the RSS, and subsequently, the in-charge of its Pune City Students' Cell. Later, he was made a member of the executive committee of the city RSS.[citation needed] The Janata Party by this time had split, and the Bharatiya Janata Party, founded by the leaders the erstwhile Bharatiya Jana Sangh had come into existence. Munde was made President of the Maharashtra unit of the BJP's youth wing, the Bharatiya Janata Yuva Morcha.

Lok Sabha[edit]
Munde served as a member of the 15th Lok Sabha (2009–2014), representing the Beed constituency.[7][8] In 2014, Munde again won the Lok sabha election from Beed Constituency by margin of 1.4 lakh votes. Subsequently, on 26 May 2014, he was appointed as Minister of Rural Development by Prime minister Narendra Modi.[9]

Death[edit]
Munde was involved in a road accident at 6:20 AM on June 3, 2014, while on his way to the Delhi airport.[10] The accident took place at Aurobindo Marg in South Delhi. He was brought to AIIMS by his personal assistant and driver, 10 minutes after the accident. After receiving CPR, he was declared dead at 7:20 AM.[11] Reports state the driver that hit Munde's car has been taken into custody.[12]
By Firoze Shakir Photographer No1 - June 03, 2014

What is the Future Of A Muslim Beggar Kid 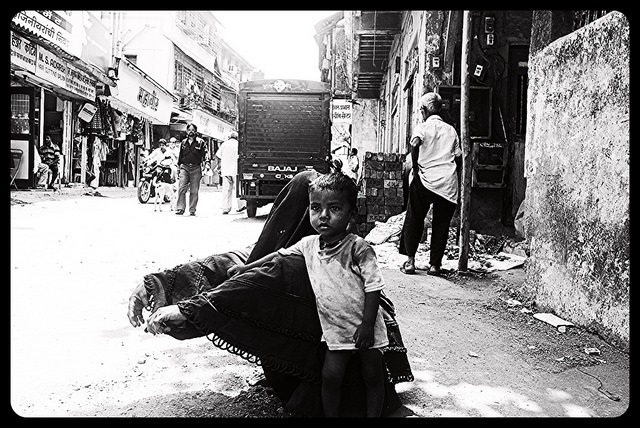 I shot a picture , I did not squat focus I just shot the expanse and the beggar mother and her child I gave them money but I took several shots , because I saw something very powerful in the kids eyes, and though I ask myself what is the future of the Muslim beggar child ..I am certain this kid will rise one day go places see his body language he is protecting his mother from my camera evil eye ,, the eye that  steals souls ..

This is the eponymous Bandra Bazar Road , it extends beyond till JJ Colony though it touches the Jain Mandir ahead and becomes Jain Mandir Road when it exits out towards Bandra Hill Road , and if you move towards the back of my camera it passes Ram Mandir and the Shia Mehfil and reaches Pahelvi Hotel one arm goes towards the Bandra Bazar Market and one arm touches St Peter Road Waroda Road Chapel Road.. from Pahelvi one bylane goes to Boran Road touches Bandra Hill Road.

From Pahelvi if you take a right you enter De Monte Street a further ahead Chinchpokli Street and touching Jain Mandir Road beyond this Haji Nura Lane Lucky Hotel and out to Bandra SV Road and you cross it you reach Bandra Station , you can take the haunted skywalk too.

Why have I described these lanes , these are the lanes that are the hunting grounds of the various beggars that come to Bandra to beg..

And this area is home to East Indians the original inhabitants now a dwindling number overtaken by the Muslims, Bohras Maharashtrians, Marwaris,  Gujratis and other communities some Sikh some Parsis ..the people are humble generous and kind towards the beggars and that is why beggars come to Bandra Bazar Road , alms are guaranteed.

And today 75,936 peoplehave visited my Flickrblogs till now ,,I am a blogger but I shoot pictures that become photoblogs ,, stories depressing tale of life defeat and fall of a certain segment of humanity .

There are beggars among Hindus too but I have showcased the pain pathos of the Muslim Beggar neglected both by the Muslim community and society at large.

I shoot beggars per se ..but the veiled lady covering her mortal wounds is the subject of my choice ,I can write a poem too but than every pictures does not fit in as poetry though I call this path I have chosen to document as the poetry of Life .

I use Aviary for robbing the details of my original color pictures ,I use harsh contrast I add lots of black for that is the color of their doomed lives .

I dont use selective focusing I shoot wide. will camera clubs ever invite a person like me to talk on Beggar Photography , it would be an insult humiliation of their Fine Art status , camera club denizens only shoot with their camera they shoot what others shot , they shoot what others will shoot .. as a blogger I can smash my camera and still shoot pictures by uploading a black image and fitting texts to match..

This is the lane I walk and its been a few years after I shot this image but I never saw this mother and her child instead a Muslim beggar sits there silently with a skull cap on his head and nicely dressed .he does not talk at all.

So this is the beggar child his eyes inspired me to add text and highlight his future .. wherever he is I pray and wish him well.. he is far braver than me and you .. he protects his mother ... I failed my mother in more ways than one .. but I remember her ,no denying , I was in Muscat I used to send Rs 1000 to my mother every month and Rs 200 to my wife in the early 80s simply because my mother cared for seven of us including my
wife and a kid at that time.
By Firoze Shakir Photographer No1 - June 03, 2014