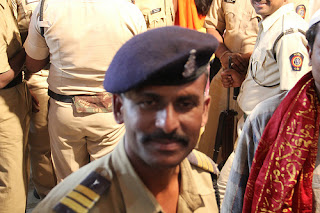 He saw that nobody hassled Marc de Clercq who was documenting the Palki segment at Haji Malang Urus ..

And this respect foe foreigners are guests is known as Devo Atithi Bhavo..

I thanked him for this gesture and our Police unlike the Uttar Pradesh police does not beat or bully foreign  photographers  who come to shoot and share our culture with others.

a picture is picture color or black and white 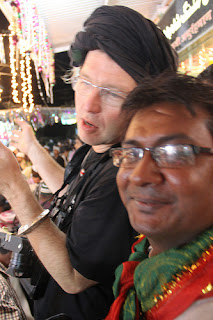 recreating
the magic
of spectral
light ..
giving birth
to new raw
emotions
birds in
flight
suffice
to say
1000
nights
the flesh
was weak
the spirit
contrite
godliness
is respect
for human
rights
humility
maketh
a man
not just
might

photography is silently stalking the soul of humanity 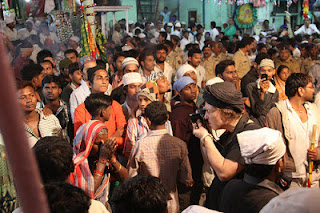 As a photographer I have learnt watching other people shoot...and one person I admire is my Malang brother Marc De Clercq , he shoots without being heard or seen.. he becomes one with the surroundings despite his giant girth height and color of his skin... that normally would stand out in a sea of brown people , but he controls it  becomes brown so to speak,and Marc and I have been friends since 2005 ...we have shot events moments together ..be it Ajmer or private gatherings of hijras, we both document the humanity of the transgender.

This was Marcs first trip to Haji Malang but the way he came across as a professional it seemed he has shot such places before , and he shot  in every corner of India 3 Kumbhs  Koovagam Eunuch festival several times , Kaliar sharif Makhanpur and a vast canvas from Kanyakumari to Kashmir.

One person who has learnt much from Marc is my 5 year old Canon shooting grand daughter Marziya Shakir, she has been shooting Marc each time he comes home spends time with my family.

Marc and I became Dam Madar Malangs together and our Peersaab is Baba Masoumi.. a humble teacher and an austere man with simple aspirations.


Because of my bad health i had to abort my Haji Malang trip midway, I shot the Palki and in the morning the day after the Palki I climbed down and returned to Mumbai.

I am still not fully recovered and have been cooped up in bed under medication.
By Firoze Shakir Photographer No1 - February 28, 2013