The Holy Waters Of The Kumbh 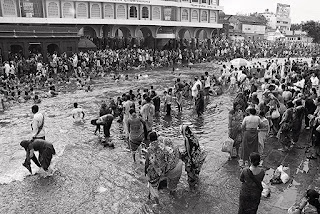 taking a dip in the waters
of the godavari their sins
are washed away ,,for
their dear departed
ancestors they pray
bathing at the kumbh
mela nasikh a spiritual
getaway ,,to the gods
with humility their love
they repay ,,sita ram
sitaram radhe sham
radhe sham  as they
chant away ,,om ganesha
shri krishna radhe radhe
By Firoze Shakir Photographer No1 - September 10, 2015 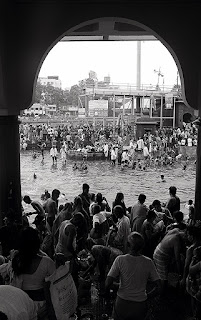 From the time I started posting pictures at Flickr it was a mechanical state of mind and I uploaded the entire lot in a set added title and tags hardly any description , perhaps only as an introduction and once I had offloaded all my stuff I breezed out ..I never went back..if somebody commented I went back thanked him that was it a few pictures I crossblogged from Flickr to Twitter Facebook or Tumblr though my main blogs are at Blogspot and I still dont understand why Ms Marissa Mayer disabled crossblogging there ,...as I have to manually blog there which is a pain typing with one finger ..a bigger pain.

If you are a peoples photographer , the Kumbh Mela grows on you after every picture and I shoot without constructive method I just shoot impulsively I know when to direct my lens cosmically at a situation or thought ,,perhaps it was this inherent attitude of mine that had upset a lot of American photographers that shot with me ,,and thankfully alienated me from both of them.. I dont have the patience to sit compose ,, I shoot a storyboard single frames stitched together as moving pictures .

I had no intention of leaving Trimbakeshwar  where I was based with my Naga Guru Shree Vijay Giri Maharaj at the Naga Sadhu commune ,,and Ramkund Panchvati where I shot this bathing and the Vaishnav Sadhus at Tapovan is almost 27 km away from Trimbakeshwar .. I took permission from my Guru on 28 August to shoot both these places had he told me not to go I would have not gone at all.. and on 29 August was Shahi Snan at both the places the Grand Holy Dip of the Sadhus roads being blocked inwards outwards for vehicular traffic at both places ,I was to leave Trimbakeshwar for Mumbai via Nasikh on 30 August ,, so I hardly had anytime ,, I shot Ramkund and Tapovan..

I was also not very sure I would come back again for the next Shahi Snans , my work commitments , etc .

For me going to a place like the Kumbh is cosmic interpretation ,, it can happen if he wills I call it miracle .. nothing less ..I may not have money like those photographers who live at the Kumbh for weeks , they have professional assignments I have other responsibilities ,, photography is not my source of income at all .. I am a blogger first a photographer later .. i shoot to share my pictures and my eyes my soul my mind becomes Hindu till I am shooting the Kumbh Mela ..I block all other myriad identities of mine ,,perhaps I allow the poet and the beggar in me to accompany  me on my shoots such as this.I become a beggar with the beggars and I become a poet because photography is visual poetry ,,its not about shooting cocks of the Naga Sadhus ,,

And now I am revisiting my Ramkund set picking up a few images tweaking them adding words where words did not exist,.. I like BW .. though the Kumbh is versatility exuberance of color ,,I mean shooting the cutting of heads during Moharam makes an impact in color rather than BW....but at the Kumbh both works fairly well.

I would love to shoot the Shahi Snan at Ramkund it is huge ostentatious and grand I shot it in 2003 .. but I hardly know anyone at Tapovan or Ramkund ,, so I rather shoot Trimbakeshwar hassle free with my Naga Guru and I am not young , its tough to shoot the Kumbh Mela walk miles with my age and my leg injury that because of my diabetes refuses to heal.

So if I go back again to shoot the Kumbh it would surprise me the most .. miraculously too.

The Magic Of The Maha Kumbh Lasts A Life Time .. Allahabad 2013 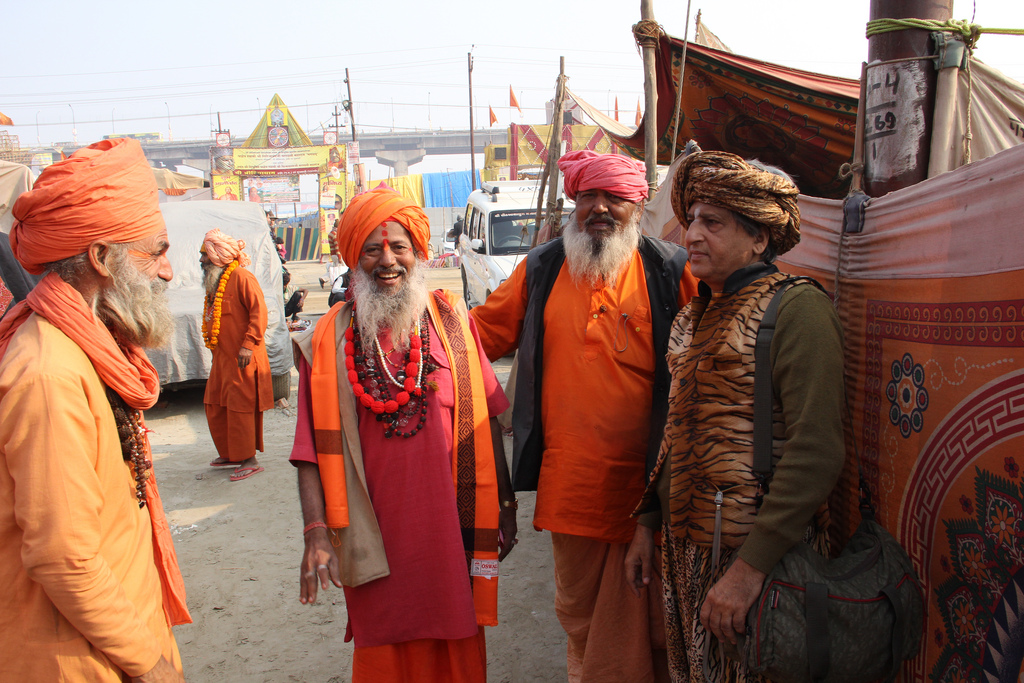 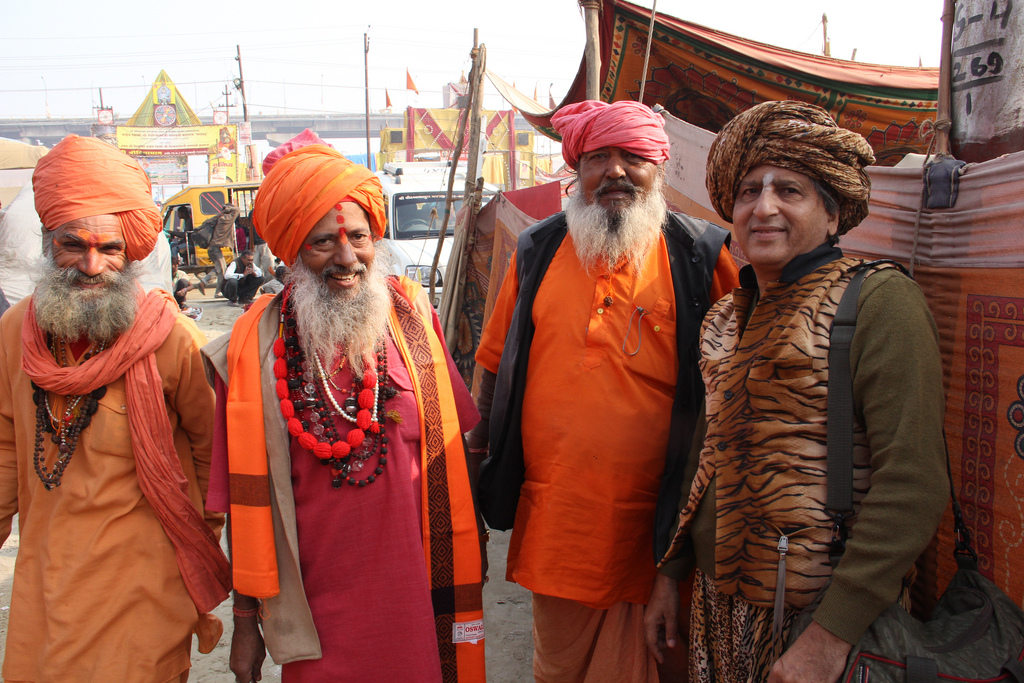 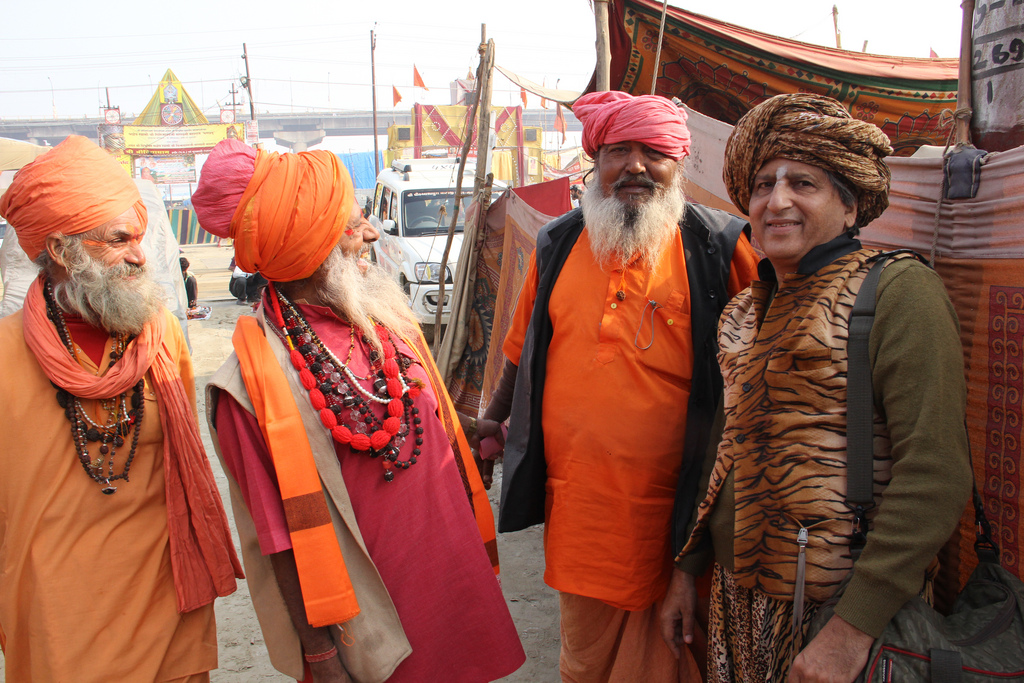 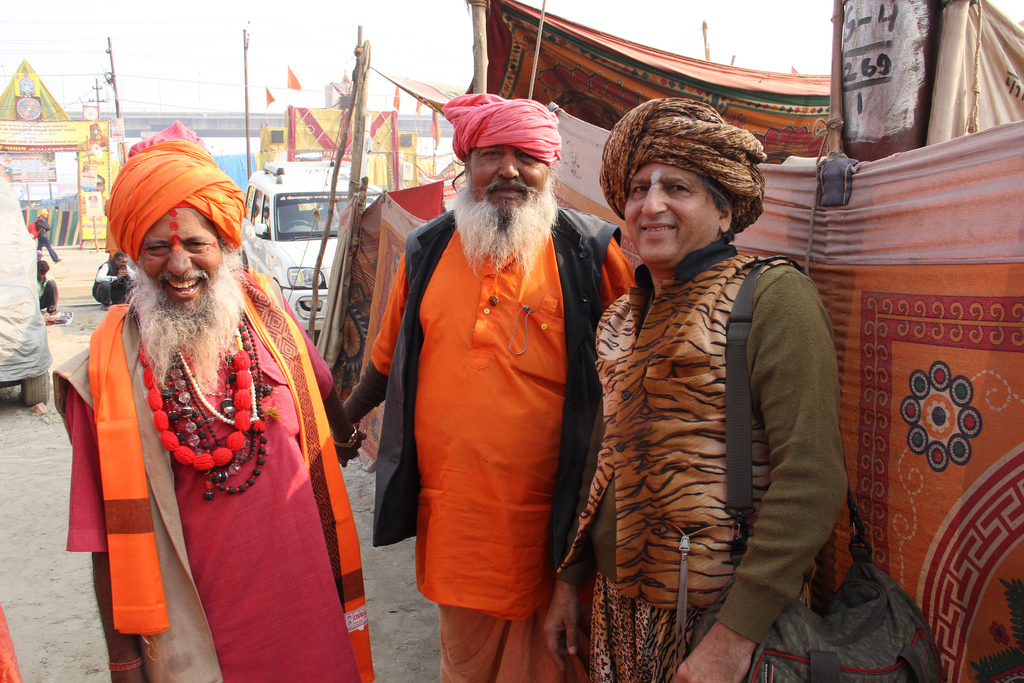 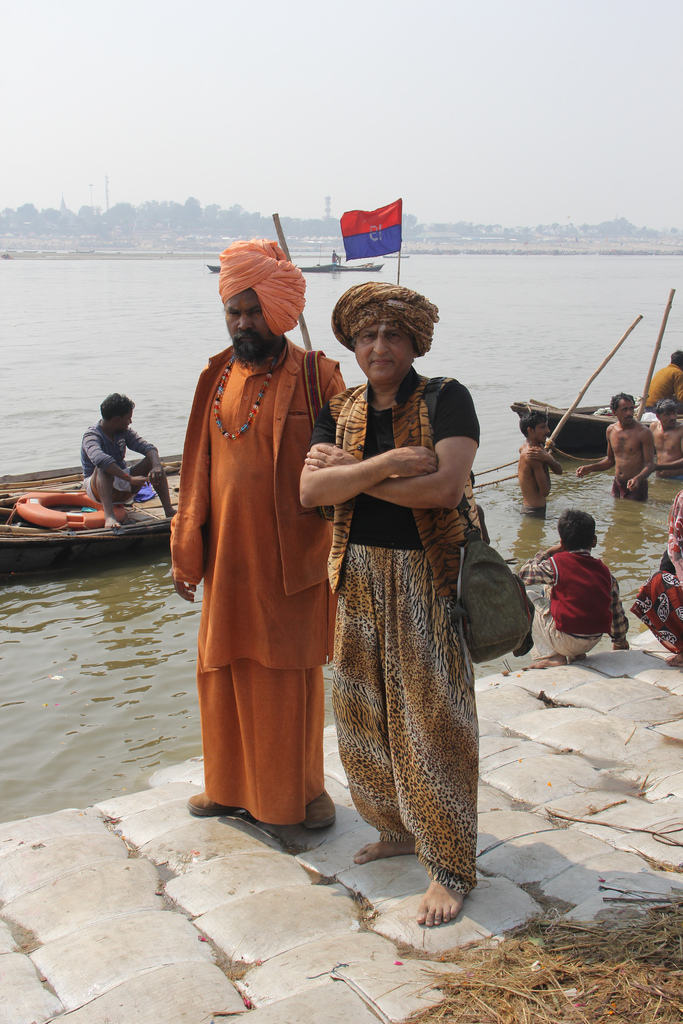 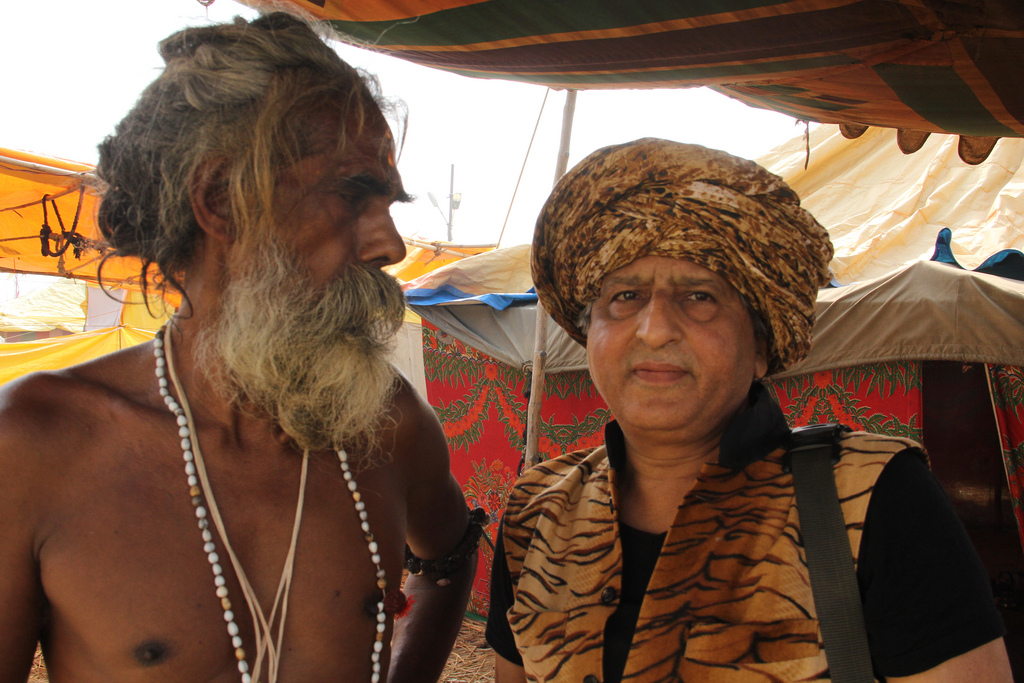 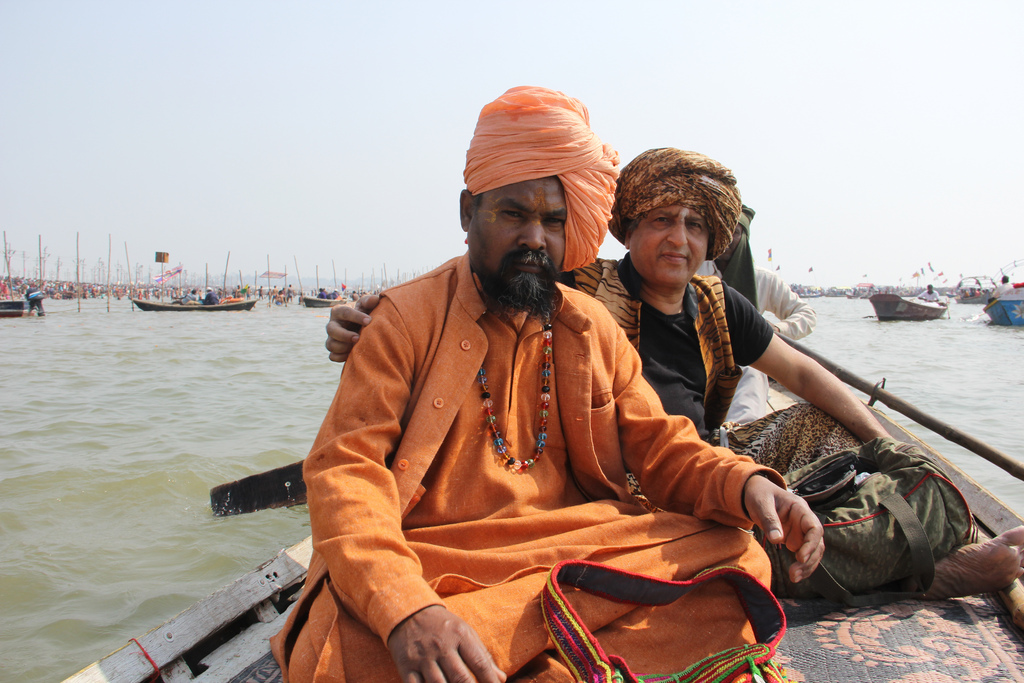 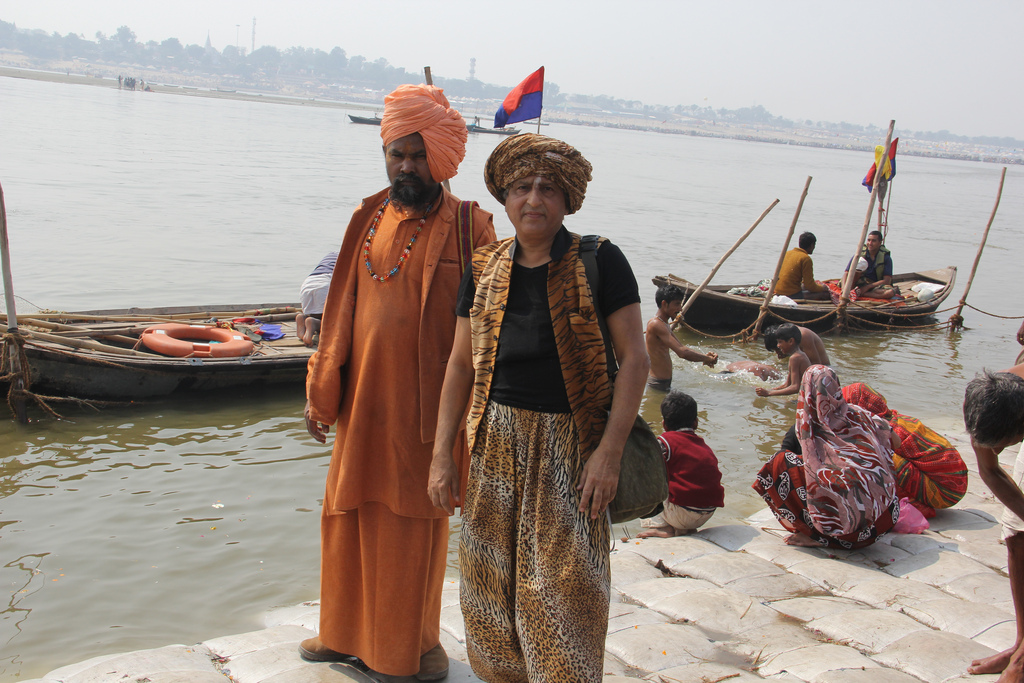 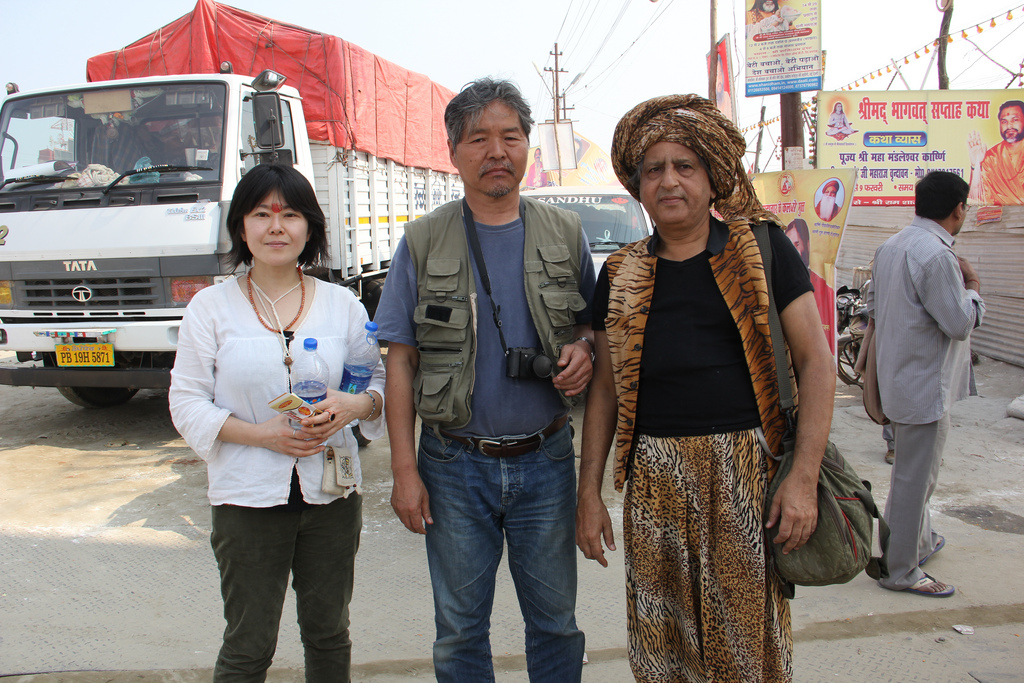 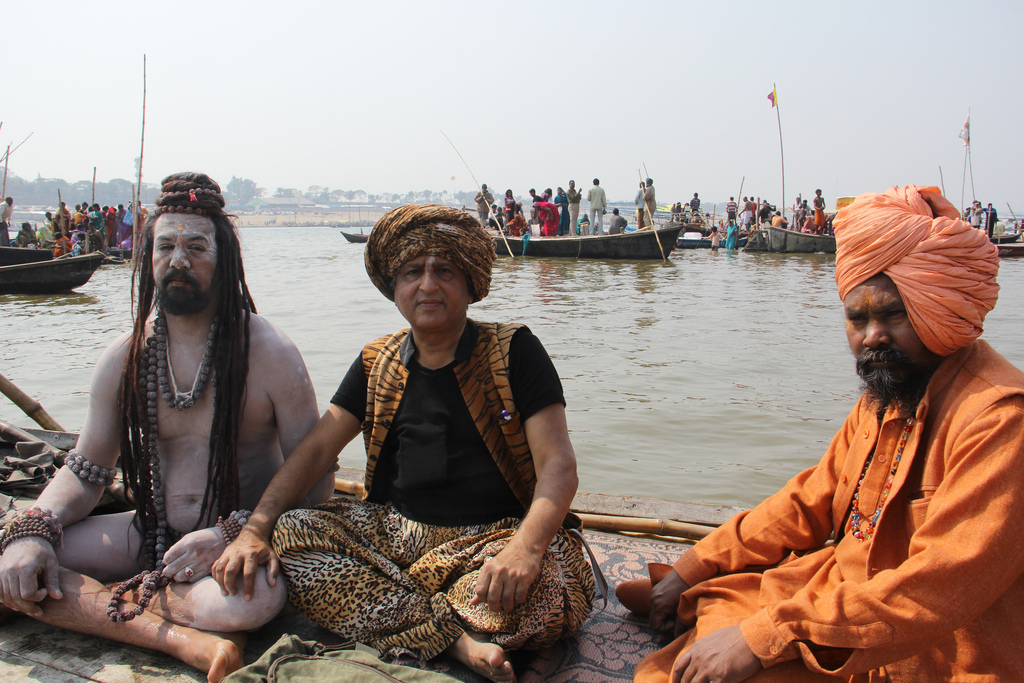 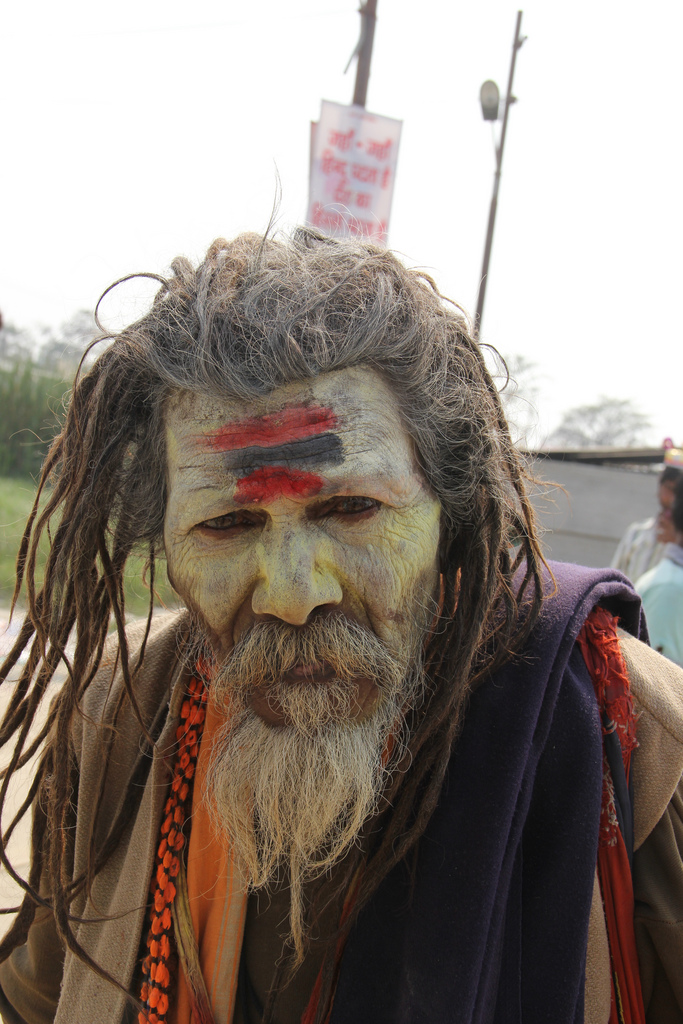 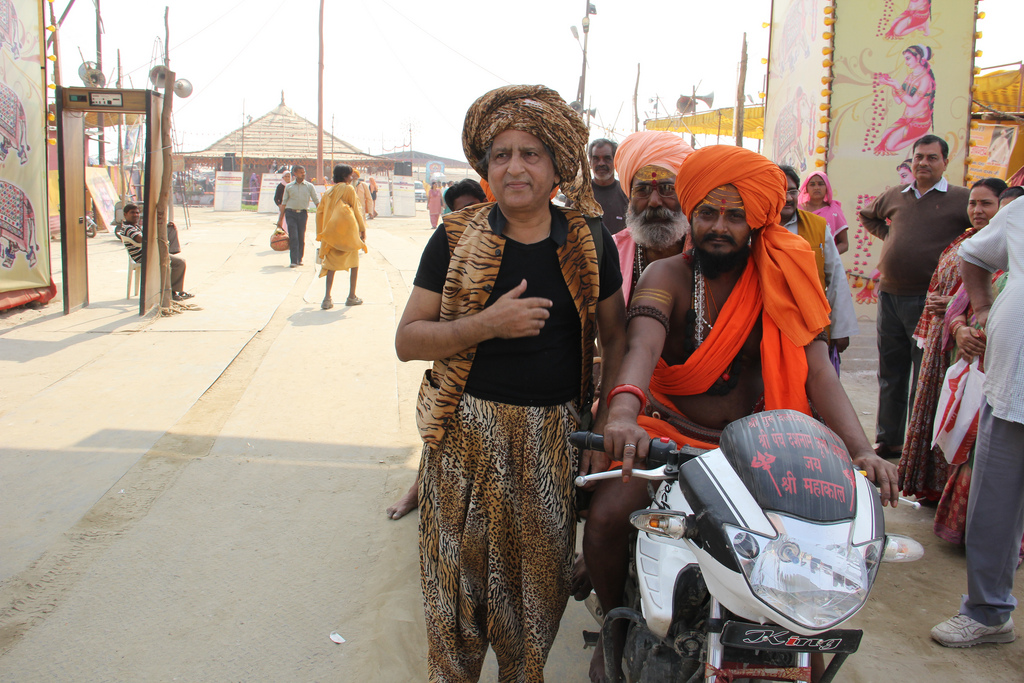 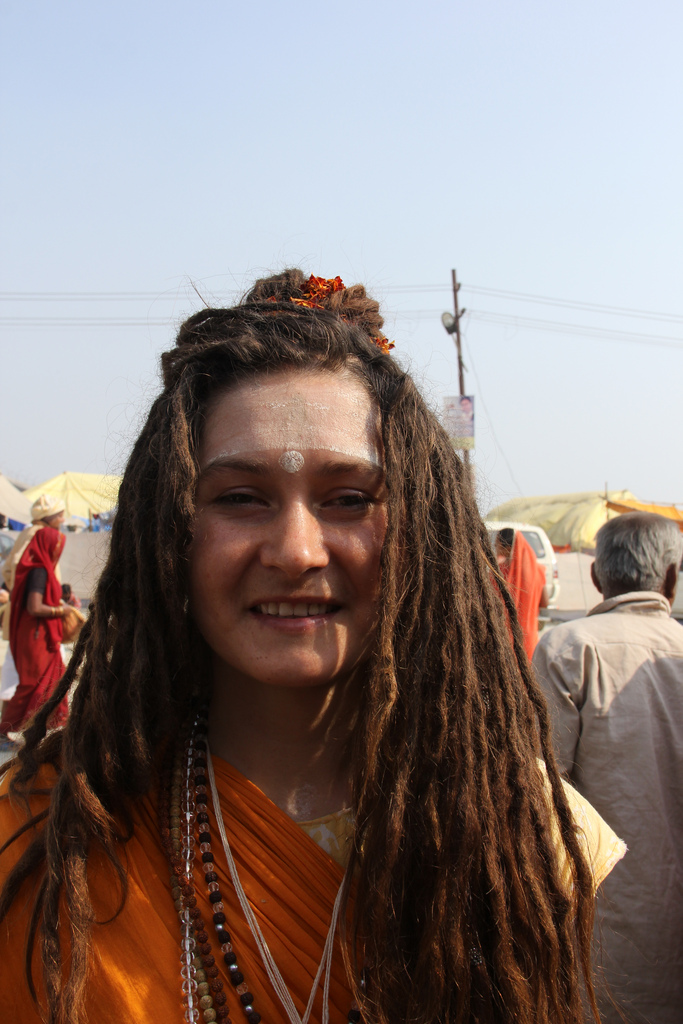 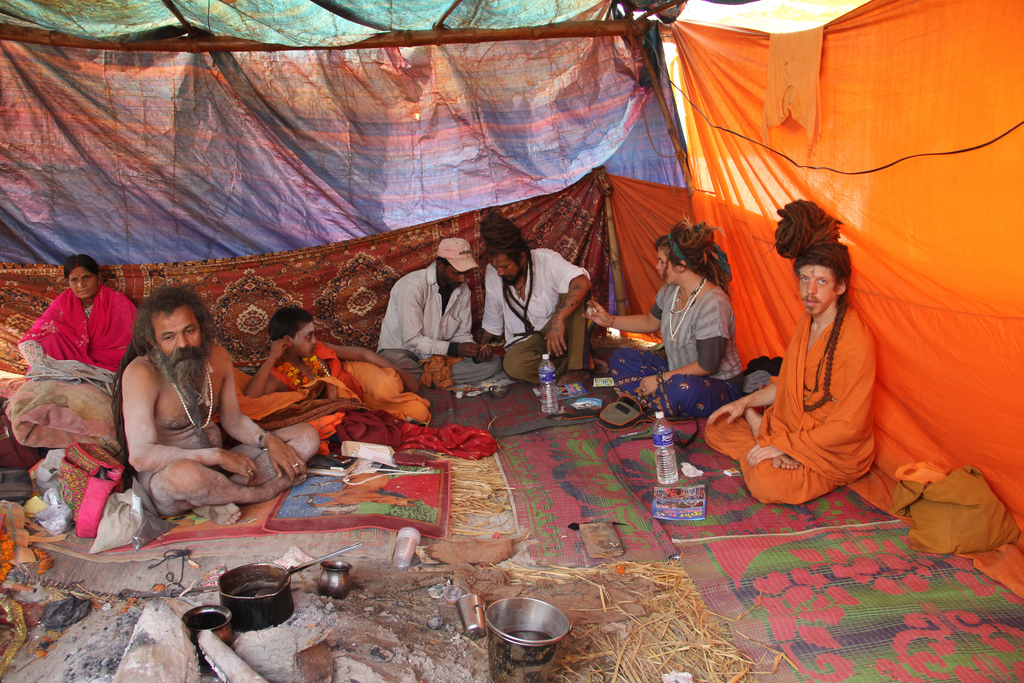 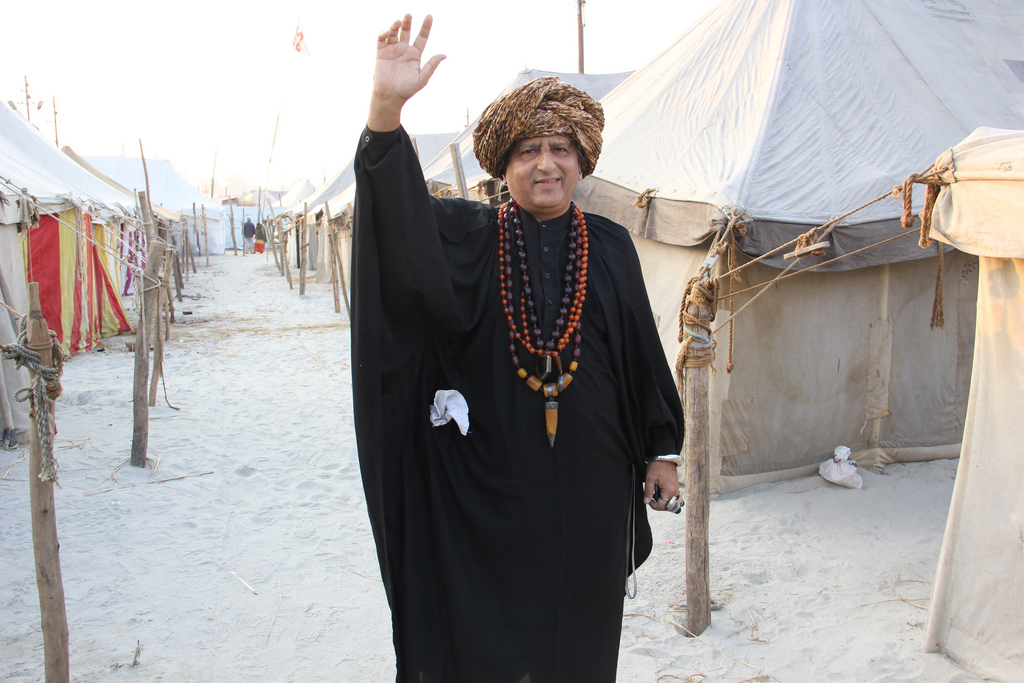 
I was predestined to shoot the Maha Kumbh ,, a call from my Naga Guru Shree Vijay Giri Maharaj Triveni and I left Mumbai on my tattered wings ,,I kept my identity as a Malang intact though my Guru as my protector insisted on naming me Ashok Bhartiya as many Naga Sadhus do not have the kindness understanding of my Guru ,, but with due respect though I adhered to his request I dressed as a Malang most of the time in the midst of the Naga Babas,, I had not carried any saffron clothes this was my first Maha Kumbh ,, I met the Maha Mandleshwars Sabapati and most of the time I was at sector 4 the Juna Akhara .
Our meals were at Swami Kalyan Ananadji 13 Madi my Gurus Maha Mandleshwar .. pure Satvik.. the Naga Sadhu who helped me was Bhagwati Giri , he was unwell but took us by boat on the Sangam and he was one highly connected dude and higly impressed with my Muslim credentials ..he could not believe it at first that I was the disciple of his Guru brother ,, I met a lot of living Sants I was called by Chandraswamiji ,, I met my Tantric Guru Kapoor Khamakya a very powerful man connected to the Order of Khamakya Goddess ..I spent some great time with him.
My Maha Kumbh set has been restricted by me because of total frontal nudity keeping in mind Flickr terms and guidelines... only a Flickr member can access my Maha Kumbh documentary.I shot 5000 images in a few days I shot the Shahi Snan Basant Panchami 15 Feb 2013 and left Allahabad on 16 Feb..
I shot over 5000 images but I could have shot over 15000 images had my Guru left me on the shores of the Ganga on the day of the Shahi Snan but he insisted I leave with him for my safety ,, I did without regrets ..
One thing was certain I did not want to shoot the Maha Kumbh merely as a photographer in pant and shirt from outside the fence .. I became a Sadhu within the soul of a Malang,...
Sadly I missed this spiritual euphoria of the Maha Kumbh at Nasikh,,
My Tantric Guru Kapoor Khamakhya wants me to meet him for the last Shahi Snan.. If I live I will go..the spirit is willing but the flesh is weak..
By Firoze Shakir Photographer No1 - September 10, 2015 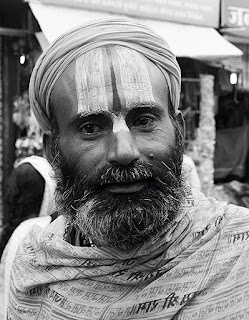 I was here for a few hours as I was staying with the Naga Sadhus at Sadhugram Trimbakeshwar all this was shot on 28 August , and I took permission from my host my Naga Guru Shree Vijay Giri Maharaj before making this trip to Nasikh Ramkund about 27 km away from Trimbakeshwar by bus ,,

From the bus depot I took a sharing ricksha that dropped me at Panchwati and I walked into the Kumbh ,, I had shot the Nasikh Kumbh Mela 2003 several trips at Ramkund ,, I shot the bathing ghats , I shot the beggars of Ramkund being served batata wada by rich folks .

There is a lot of street shots from the ghats till the sharing ricksha stand to reach Tapovan the residential Akhara of the various Vaishnab Sadhus ,,I was quite surprised to meet the Aghoris here , but they are like nomads moving from place to place asking for food and alms.

At Tapovan you can shoot myriads of faces portraits of the Sadhus , the pilgrims ,,a lot of bathing shots at Tapovan waters .. there is a Shiva temple on the hills above I skipped it because of my leg injury.. and I shot over a 900 images here a few videos ,, but if you want to shoot Naga Sadhus than Trimbakeshwar Neel Parbhat and Brahma Giri are the two places you will find them in plenty .. in the mornings they come to bathe at the Trimbakeshwar Kund ,,on normal days too.

A lot of street photography at Trimbakeshwar ,,3 km away from Trimbakeshwar is Pengal Wadi the other main Sadhugram of the Naga Sadhus and here too you can shoot a lot ,,I stayed here ,, most of the Naga Sadhus are Maharashtrians ,, a lot of farmers are their followers and disciples dressed in white with Gandhi topis ,, their sad faces and the overwhelming sadness of their farmer wives can kill you ..they are searching for a straw before they eventually drown thanks to the apathy of our state and central government ..the one thing you can be sure you can always get something to eat at the tents of the Sadhus they are extremely bound by the mantra of Devo Atithi Bhava ,,hospitality is the essence of their humility ,,

Yes I have not yet got over this euphoric moment called the Kumbh Mela ,if you are a photographer and have not shot the Kumbh than you have missed a vital link in your future repertoire ,, this was my third Kumbh ,, my second at Nasikh..