Will He Give Me Milk Or What 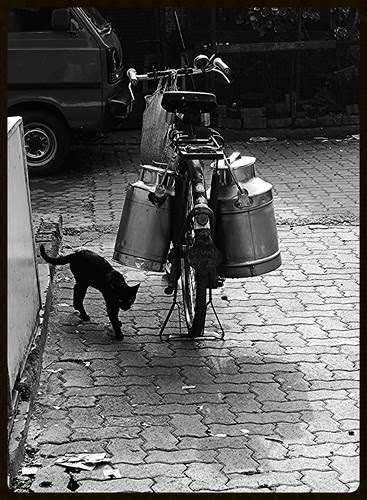 Will He Give Me Milk Or What, a photo by firoze shakir photographerno1 on Flickr.

the black cat
in a pensive
mood gave
way to his
feline thought
why are people
scared to cross
my path,,..an
after thought
the black cat
in a cosmic
circle of
godly despair
i accidentally
shot...we both
in our inherent
black moods
demonic delusions
we fought ,,,he was
happy being a cat
i for a change with
my karmic dillema
felt unhappy in my
slot... as i shoot
as i rot ,,,,

dedicated to mystic muse ..a moment within the soul of my bloodclot ...no the milk man did not give her a saucer of milk.. ..his idealism his sloth 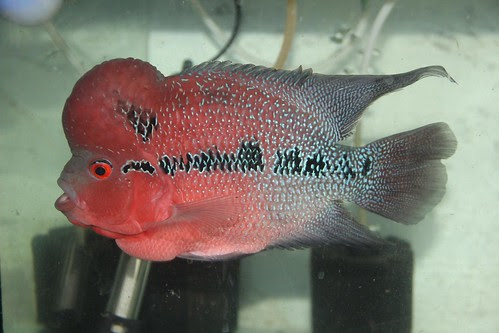 Flowerhorn cichlids are ornamental aquarium fish noted for their vivid colors and the distinctively shaped heads for which they are named. Their head protuberance, or kok, is formally termed a "nuchal hump." Like blood parrot cichlids, they are man-made hybrids that do not exist in nature. First developed in Malaysia, Thailand, and Taiwan, they are now kept by fish hobbyists worldwide. Some critics have questioned the impact of flowerhorn breeding programs.

Flowerhorn breeding dates from 1993.[1] Malaysians admired fish with protruding heads, known as Karoi or "warships," found in the western part of the nation. The slightly protruding forehead and long tail of these fish were prized in Taiwanese society as bringing luck in geomancy. By 1994, red devil cichlids (typically Amphilophus labiatus) and trimac cichlids (Amphilophus trimaculatus) had been imported from Central America to Malaysia and the hybrid blood parrot cichlid had been imported from Taiwan to Malaysia and bred these fish together, marking the birth of the flowerhorn.[dubious – discuss]
In 1995, the blood parrots were further crossbred with the Human Face Red God of Fortune, which produced a new breed called the Five-Colors God of Fortune.[1] With its beautiful colors, this fish quickly became popular. Selective breeding continued through 1998, when the Seven-Colors Blue Fiery Mouth (also known as Greenish Gold Tiger) was imported from Central America, and crossbred with the Jin Gang Blood Parrot from Taiwan.[1] This crossbreeding led to the first generation of Hua Luo Han flowerhorn hybrids, which were then followed by subsequent flowerhorn introductions.
Arrival in the West[edit]
When Luo Hans were first imported to the United States, there were only two breeds of these fish for distribution, flowerhorn and golden base.[1] Flowerhorns came in two varieties, those with pearls (silver-white spots on the skin) and those without. Golden bases also had two varieties, those that faded and those that did not. Among the flowerhorns, the ones without pearls were quickly overtaken in popularity by those with pearls, becoming pearl scale flowerhorns, or Zhen Zhu. With the golden bases, the unfaded ones developed an attractive golden skin in place of what had been the flowerhorn’s grey skin.
As of 1999, there were four strains of flowerhorn available in the American market: regular flowerhorns, pearl scale flowerhorns, golden flowerhorns, and faders.[1] Commercial breeders proliferated, and fish were selected for appearance with little regard for terminology.[1] Consequently, names became confusing and parentage became difficult to track.
Around 2000–2001, the Kamfa variety appeared. These were hybrids of any type of flowerhorn crossed with any species of the genus Vieja or with any parrot cichlid.[1] These brought in some new traits, such as short mouths, wrapped tails, sunken eyes, and increasingly larger head bumps. Seeing this, those who bred the Zhen Zhus began line breeding their fish to develop faster and become more colorful, in order to compete with the Kamfa strains.[1]
In captivity[edit]

Flowerhorn cichlids have a life span of 10–12 years. They are usually kept at a water temperature of 80–85 °F, and a pH of 7.4–8.0. They require a tank of a minimum of 55 gallons, with 125 gallons optimal. A breeding pair may require a tank of 150 gallons or more, depending on size. Being aggressive and territorial, two or more flowerhorns are usually not kept together, but the tank housing them can be divided up with acrylic dividers or egg crates.
There are several ways by which breeders distinguish between male and female flowerhorns. Generally, the males are larger than the females, but there are some exceptions. Males have the kok, or the nuchal hump, on their foreheads. Males also usually have brighter and more vivid colors. For most breeds, the females have black dots on their dorsal fins, whereas males usually have longer anal and dorsal fins. Females tend to have an orange belly, especially when ready to breed. The mouth of the male is thicker and more pronounced than the female's.
Flowerhorn cichlids are subject to several diseases, including hole-in-head disease, "ich", and digestive blockages.
Kamfa[edit]


Kamfa
This breed originated from the Luohan. Its main characteristics are white or yellow eyes (red eyes are possible but not common), a fan tail, a water-colored head bump, sunken eyes, and smaller lips than the Zhen Zhu. This breed generally also has a larger and more square body than that of the Zhen Zhu. Head flowers can be found on the Kamfa, but not as prominently as with Zhen Zhus.
Zhen Zhu[edit]
This breed originated slightly after the Kamfa, derived from the Luohan. It has a rounded tail, large mouth, red protruding eyes, and a prominent head flower. Zhen Zhu means "pearl flowerhorn." This breed's strongest characteristic is pearling. Breeders often cross other types with Zhen Zhus because they breed easily and can create better pearling for the next generation. Weak tails can also carry over, however.[1]
Golden Base (Faders)[edit]


Golden Base
Faders are called by that name because during the juvenile period of life they lose their color and go completely black. As the fading process continues, the black "fades" away, leaving a more vibrant and beautiful color, usually yellow or red. They are also referred to as golden base or Golden Trimac.[1]
Red Texas cichlids are related to the golden base family of flowerhorns. They were originally created by breeding a green Texas cichlid with a Mammon or King Kong parrot, then crossing the offspring back to the parents until a consistent red color was achieved. Hobbyists consider the most important feature of the red Texas to be the color. Red Texas cichlids range in colors, and are rated as:
Unfaded: lowest grade of red Texas.
Yellow: second lowest grade.
Orange: the majority of red Texas fall into this category.
Coral: pinkish but not quite full red.
Red: most desirable color.
The second characteristic that sets the red Texas apart is the pearling. Red Texas can vary greatly in terms of the type of pearling.[1]
King Kamfa[edit]
From the Kamfa family, this fish typically has white or yellow sunken eyes, although red eyes are possible but rare. Distinctive features of this breed include an intense black double flower row along the lateral line, and very thick white pearling. Originating in Thailand, this breed has seen a recent rebirth in Vietnam. The body is typical of a Kamfa, with a fan tail, and a longer body than some other Kamfas.[1]
Kamfamalau[edit]


Kamfamalau
This is a cross of a Kamfa male and a Malau female. The body and face resemble a typical Kamfa (see above). The finnage and sunken eyes reflect the Kamfa genes. The main feature of a Kamfamalau is the pearling. Fins typically take on a "frosted" pearl look that is rarely found in any other breed of flowerhorn. Pearling usually crosses all the way across the head bump, another rarity in flowerhorn breeds. This breed should display the best characteristics of both Kamfa and Malau.[1]
Thai Silk[edit]
The Thai Silk, also known as Titanium, is a relatively new breed. This flowerhorn breed is almost completely metallic blue. Its origins are unclear. A new strain of Thai silk has been developed that has a kamfa-type body and red or white eyes.
Strains[edit]

A strain is a more specific subset within a particular breed. Strains can get as narrowly defined as all coming from one individual parent fish. Strains can also differ by country of origin and by breeder.
JPG or Golden Apple[edit]
Created by Ah Soon of Malaysia, these fish are characterized by a large stocky body, as well as metallic pearling.[1]
IndoMalau[edit]


Elvis strain
These were created by the Indonesian Luohan Club (ILC), using a Golden Monkey (or Malau) female and a Zhen Zhu male. The second generation was spawned from the Elvis selection and a Golden Monkey female. The strain is characterized by extensive pearling all over the body, face, and head. What distinguishes an IndoMalau's pearls from that of a Zhen Zhu or a King Kamfa is that they are extremely fine. As the fish ages, the pearls become more intricately woven and thinner. Flowerlines vary dramatically; some only have a few flower spots. Most ILC IndoMalaus will include some singular flowers on the back line or "top row." The front half of the fish, from the pectoral fins forwards, is red. The back half is a golden gradient intensifying in color towards the tail. The body is very wide and high, a throwback to the original Luohan. There is a very pronounced chin or "gobbler." The head is usually forward-protruding. The tail is fan-shaped, close to that of a Kamfa. The dorsal and anal fins lack trailers, a common trait found also in Zhen Zhu. The caudal peduncle is very large and pronounced in this strain; this helps prevent development of a drop tail.[1]


Tan King strain
Tan King[edit]
This strain was created by Mr. Tan of Vietnam, by crossing a Zhen Zhu with a Kamfa. It has pearls and a flowerline like a King Kamfa, but the body and fins are more closely related to the Zhen Zhu. Most have protruding eyes and a more rounded tail like a Zhen Zhu.[1]
Strains developed in the United States[edit]
New flowerhorn strains have been developed through breeding programs in the U.S. Although it is hard for the U.S. to compete with Asia's well established flowerhorn breeding farms, strains with unique genetics have been created.
Gallery of early flowerhorn strains[edit]

Criticism has also been made of placing flowerhorns, which are man-made fish, into fish taxa, which are reserved for the identification of species found in nature.[citation needed] This practice can make identification of similar cichlids difficult. Breeding with pure bloodlines of cichlid species has already occurred in a number of cichlids commonly kept in the hobby, risking loss of genetic material.[citation needed]
Flowerhorn breeding also contributes to the commercial demand for new and different fish, possibly leading to questionable practices, such as breeding for anatomical deformities, as occurred in goldfish breeding.[citation needed]
Flowerhorns have been criticized by some[who?] cichlid hobbyists and environmentalists for a number of reasons. Interest in flowerhorns resulted in culling of surplus and deformed fish, some of which were dumped in the wild in Malaysia and Singapore, where they survived and disrupted riverine and pond ecosystems.[3][4][5] Like many other cichlids, flowerhorns are aggressive and can breed quickly, competing with and eating native fish.[6] 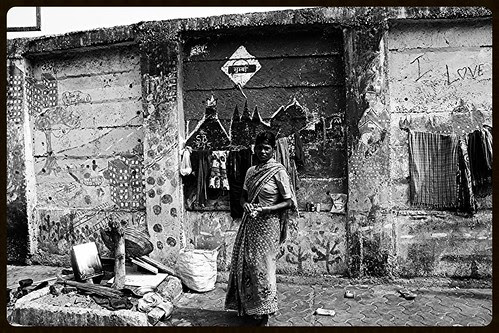 Home wasn't built in a day..., a photo by firoze shakir photographerno1 on Flickr.

when the municipality comes
blown away..home is an
illusion where we stay ,
hafta to the cops ..
protection money to
the local goons we pay
every night for the safety
of our home on the street
we pray..when the street
light goes out ,,the sky turns
gray...where there is a will
there is a way....no doors
no windows no roof..,,just
hope ..a few blocks away