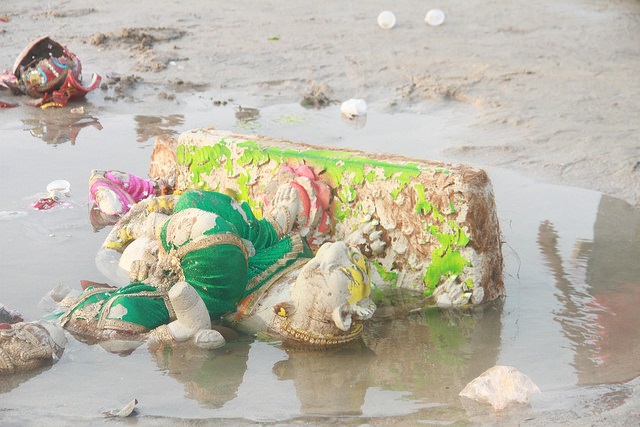 Those who immerse Goddess Durga go away .. after the festivities but all the Pandals that bring Durga for Immersion should hire  people  and see that Durga is duly respected with her remains collected and removed accordingly ,, Our Municipality believes only in Lakshmi as Money and not as Durga .

During Ganesh Visarjan everybody from college kids to school kids come to clean Juhu Beach but sadly I have not seen the same respect for Lord Ganeshas mother ,, Jai Ambe Mata Gauri or Goddess Durga..

As a Muslim as a concerned Indian I feel at loss as a poet it hurts me and over the years I have never shot Goddess Durga in this state , it would be insulting my own Mother and her Motherhood.

Please do something ..Durga Visarjan should mean respect and not leaving the Mother in this state of Neglect .

I would never hurt another mans religion or I would not be shooting pictures at all.. this is with great pain I took this shot to bring a message home to all of you and authorities concerned ..

The dumpers on the beach to remove garbage do not have the same sensitivity as you and me .. for them everything on the beach left behind is garbage but for me you it is our heritage lying on the beach.
By Firoze Shakir Photographer No1 - October 05, 2014

Email ThisBlogThis!Share to TwitterShare to FacebookShare to Pinterest
Labels: durga visarjan, I Respect All Religion But Durga Debris On The Beach Is A Greater Desecration 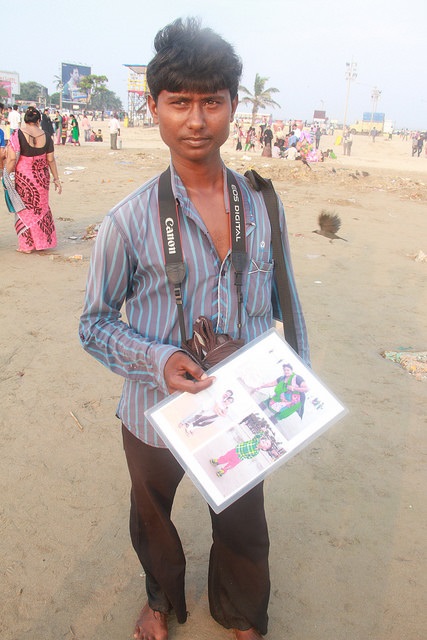 First there were just a few photographers on Juhu Beach ..Mumbais premier Tourist spot for locals living in the suburbs and those from Indias hinterland , Tourist buses bring them in hordes ,.people star eyed hoping to see Sharukh Khan or Salman Khan or even Alia Bhatt jogging on this Filmy beach.

Now there are 300 photographers on Juhu Beach , most of them know me as I come here during the Hindu feasts Ganesh Durga Visarjan and Chhat Puja .

Yesterday while I was waiting clueless for the Ramkrishna Mission Durga to arrive I passed my time clicking people on the beach and than I met Bajrang who was admiring my Canon 7D .

Bajrang is a North Indian Bhaiyya from Gorakhpur about 23 years old , his relatives are vegetable sellers he stays with them , he learnt photography watching others and bought a camera on loan from his relatives .He has been shooting on the beach for last 15 years , he did not tell me how much he earns ..but feast days like the Immersion of  Lord Ganesha and Goddess Durga brings in hope with money too.

I asked him what happens during the monsoon season , he said he goes back to his hometown and returns after the rains.

They have a deal with a studio close to the beach that makes their instant prints of the tourists gamboling in the waters or couples holding hands ,,memories of their first visit to Mumbai.

I was highly impressed by this young lad , he told me had a dream he hoped to become still photographer for Bollywood film production one day but he also told me he could not imagine selling vegetables on the road like his relatives .

And I thought of my own dad who came to Mumbai as a runaway from Lucknow when he was barely 15 years old , learnt tailoring under an Englishman ,witnessed the bomb blast at the Docks and my dad was an incorrigible storyteller ,.

And in all his life in Mumbai he went back to Lucknow once to get married and one last time to visit his mothers grave ,, he lies buried in the soil of Mumbai besides his wife at Rehmatabad Shia cemetery Mazagaon.