Muslim World of the Poor Man 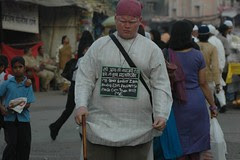 Muslims all over the world talk of Islam and there is an evil force of Jehaddis that go on a rampage killing those that do not agree with their ideologies, yet nothing is done to alleviate poeverty ignorance from the poor Muslim mans world.Most of the clerics fill their own coffers build seminaries of sectarian hate and corrupt the young kids in their charge with hatred for other communities..
My words might hurt the staunch Muslims many here on Flickr who just dont want to see the sad state of the standards of human living..
Many here on Flickr with hate for Shias and hope of Islam in Wahhabism..
I have nothing against Wahhabism as long as its members dont litter their hate on my photo stream..I do not go to other peoples photo stream to defecate my views.. against their faith or beliefs.
I do not denigerate my religion, only the guardians of my religion who pass fatwas on everything under the sun, but no fatwa to ban illiteracy and ignorance and the sad state of affairs of the poor Muslim woman in third world countries..
Here I am reminded of a Muslim youth wanting to form a federation of Islamic nations , the youth from Sri Lanka had a lofty thought but can it ever work, we as Muslims are bent on killing each other and our enemies who want to destroy Peace on Earth laugh all the way to the bank , a comment passed by my friend Neal Romanek.. on my post Muslims love killing Muslims and he as a white man has the insight we dont want to have.. 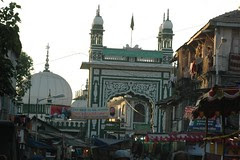 Every year for last three or four years I was invited by my friend Sakib the Florist to his Sandal that begins at BMC colony Mahim, and ends at the Shrine of the Holy Saint Makhdoom Shah Baba.I have never missed the opportunity to be a part of this procession, Sakib, also participates in the events, managed by Firoze Rafaee an exponent in sword and other forms of body mutilation..
This is the cultural ethos of the Rafaees without blood, unlike those of the Shias.
The Chancawalli Sufis were ther with Handi and were upset that I had not visited the Dhuni for personal reasons that I did not tell them, but Handi guessed as much and told me my tormentor who hates Sufis being publically photographed has been banished to Ajmer Sharif..The Chancawallis sufis to did their body piercings vigorously ..
I shot over 300 pictures from 7 pm to about 9 pm and than breaking away from the procession reached the Dhuni to meet my friend Maun Baba or Barsati Baba who has taken a vow of silence for 11 years.
He was happy to see me including the others , the head of the Chancawalli Babas is Sher Ali Baba.
The Dargah was cordoned off , metal detectors, and heavy police bandobast, I walked from the Dargah to Mahim PoliceStation where a qawwali was in progress organized by Inspector Liaqat head of the Police Makhdoom Shah Baba Committee .I shot a few pictures of the performers and walked home barefeet..

My eldest son Asif Shakir has presented me a new website to house all my poems , so as not to get into anymore head on conflicts with Flickr Support or members of my earlier poetry web site..
However I have deleted all those poems on my own..no use giving importance to bad rubbish and racist too.