Internet Photographers Were Born With Wings 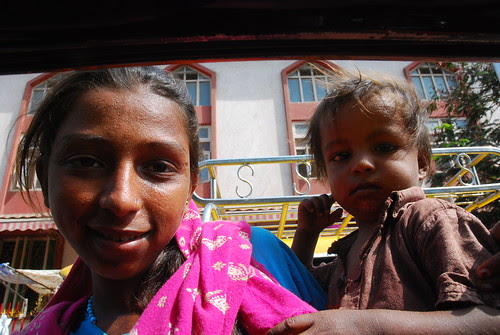 dedicated to a great human being aftab.. 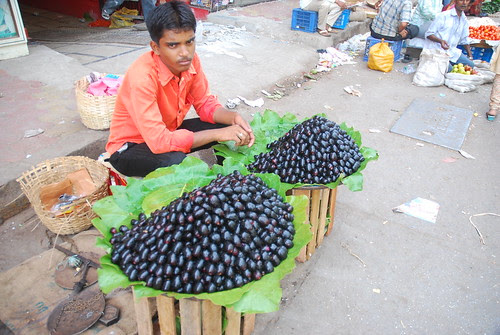 The Jambul season is on and eating jambuls is good for diabetic blood sugar control..

The fruit is a juicy berry with a single stone. It is black outside and violet inside; has a sourish-sweet pulp and greenish yellow seed.

The jambul fruit regarded in traditional medicine as a specific against diabetes. because of its effect on the pancreas. The fruit as such, the seeds and fruit juice are all useful in the treatment of this disease. The seeds contain a glucose 'Jamboline' which is believed to have the power to check the pathological conversion of starch into sugar in cases of increased production of glucose. They are dried and powdered. This powder in doses of three grams should be given three or four times a day mixed in water. It reduces the quantity of sugar in urine and allays the unquenchable thirst.

In Ayurveda, the inner bark of the jambul tree is also used in the treatment of diabetes. The bark is dried and burnt, which produces an ash of white color. This ash should be pest led in the mortar, stramed and bottled. The diabetic patient should be given 65 mg. of this ash an empty stomach with water in the morning and 135 mg. each time in the afternoon and in the evening, an hour after meals, if the specific gravity of the urine is 1.02 to 1.03. If the specific gravity ranges between 1.035 and 1.055, the ash should be given thrice daily in the quantity of about 2 gm. at a time.

* Polyuria :- The powder of the seeds is valuable in polyuria or production of excess urine. It should be taken in dose of 1 gm. in the morning and evening.
* Diarrhea and Dysentery :- Powder of the seed is an effective remedy for diarrhea and dysentery. About 5 to 10 gm. of this powder should be taken with butter-milk in these conditions. An infusion of the tender leaves, which contain a high concentration of gallic and tannic acid is also given as a medicine in diarrhea and dysentery. This infusion, prepared from 30 or 60 gm. of leaves, should be given twice or thrice daily. A decoction of the bark taken with honey is also an useful medicine for chronic diarrhea and dysentery.
* Piles :- The jambul fruit is an effective food remedy for bleeding piles. The fruit should be taken with salt every morning for two or three months in its season. The use of the fruit in this manner in every season will effect radical cure and save the user from bleeding piles for entire life. Fresh jambul fruit taken with honey is also an effective medicine for bleeding piles.
* Liver Disorders :- Natural acids in the jambul fruit play an important role in the secretion of digestive enzymes and stimulate the liver functions. Charaka, the well-known physician
of the ancient India, used this fruit in the treatment of enlargement of the liver.
* Female sterility :- An infusion of the fresh tender leaves of jambul fruit, taken with honey or butter-milk, is an effective remedy for sterility and miscarriage due to ovarian or endometrium functional disorder. The leaves presumably stimu1ate the secretion of progrestrone hormone and help absorption of vitamin E.

Precautions
The jambul fruit should not be consumed in excess. Its excessive use is bad for throat and chest. It may cause cough and accumulation of sputum in the lungs.

It is also grown in other areas of southern and southeastern Asia including the Philippines, Myanmar, and Afghanistan. The tree was also introduced to Florida, USA in 1911 by the USDA, and is also now commonly planted in Suriname. In Brazil, where it was introduced from India during Portuguese colonization, it has dispersed spontaneously in the wild in some places, as its fruits are eagerly sought by various native birds such as thrushes, tanagers and the Great Kiskadee. Scientific synonyms include Syzygium jambolanum, Eugenia cumini and Eugenia jambolana.

A fairly fast growing species, it can reach heights of up to 30 m and can live more than 100 years. Its dense foliage provides shade and is grown just for its ornamental value. The wood is strong and is water resistant. Because of this it is used in railway sleepers and to install motors in wells. It is sometimes used to make cheap furniture and village dwellings though it is relatively hard to work on.

Jamun trees start flowering from March to April. The flowers of Jamun are fragrant and small, about 5 mm in diameter. The fruits develop by May or June and resemble large berries. The fruit is oblong, ovoid, starts green and turns pink to shining crimson black as it matures. A variant of the tree produces white coloured fruit. The fruit has a combination of sweet, mildly sour and astringent flavour and tends to colour the tongue purple. The seed is also used in various alternative healing systems like Ayurveda (to control diabetes, for example[1].), Unani and Chinese medicine for digestive ailments. The leaves and bark are used for controlling blood pressure and gingivitis. Wine and vinegar are also made from the fruit. It has a high source in vitamin A and vitamin C.

Jambul has been spread overseas from India by Indian emigrants and at present is common in former tropical British colonies.

According to Hindu tradition, Rama subsisted on the fruit in the forest for 14 years during his exile from Ayodhya[citation needed]. Because of this, many Hindus regard Jambul as a 'fruit of the gods,' especially in Gujarat, India, where it is known locally as jamboon. 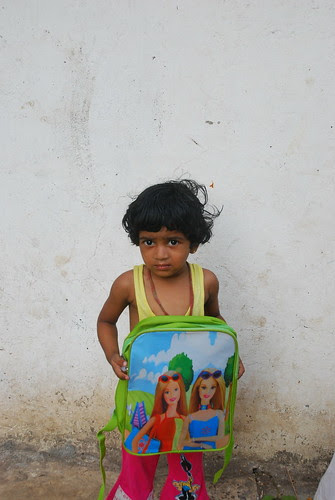 This is her new school bag , once the books are bought it will weigh more than half her body weight, the school bag reminds the girl child that this is the forerunner to her future world.. she will be burdened all her life , on her back will always be the imaginary school bag..there is no escaping the school bag.
Our education system is only for the rich and the elitist..the poor are stuck with municipal schools or the better convent schools.
This girl is frantic not because I am shooting her , but because she knows I have tapped her inner consciousness of her impending fate as a woman.

This mmornings Times narrates a story of young parents from Mumbai who take their child to be admitted to Asram Bapus Asram school on the outskirts of Bhopal, and they hitch a ride on a black Innova, the man has a gun put on his head and is wife is repeatedly gang raped..the guys have not been caught as yet.

A heavy price to pay for educating your child..

And today the kids at Behrampada slums wont go to school as their houses in the locality of Behrampada Bandra East was gutted down by a fire, here the slum houses are almost three story tin structures ..with very narrow by lanes..

Yes it is a very sad day for the denizens of this area..predominantly poor Muslims. 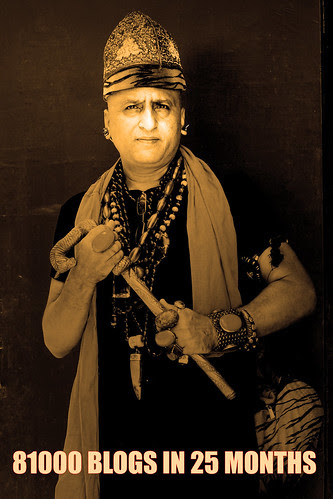 I complete 81000 Blogs in 25 months at my Flickr photostream.

Thanks to all of you.