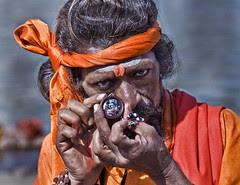 
Lord Shiva or Siva is considered as the destroyer of the world. Shiva is one of the most popular gods of the Hindu religion. Lord Siva forms the part of the Trimurti (Trinity), the other being Brahma, the creator and Vishnu, the preserver. Shiva is known for the complexity of his nature, representing contradictory qualities. He is the destroyer and the restorer, the great ascetic and the symbol of sensuality, the kind herdsman of souls and a wrathful avenger.

Lord Shiva- The Role
Lord Shiva represents the vital goodness in the form of Satyam, Shivam, Sundaram i.e.; Truth, Goodness and Beauty .Lord Shiva performs a celestial role of dissolution and recreation of the universe, that's why; he is mostly associated with the words, like destroyer and destruction. The role of Shiva is often confused with these terms and the difficulty arises, when the significance of his celestial role is not understood.

The conception is clear itself by a slight balance between the opposing forces of good and evil. When this balance gets disturbed and continuation of life becomes unfeasible, Lord Shiva dissolves the universe. This is known as '' pralay '' and it is done in order to create another cycle .So that the unliberated souls will get another opportunity to liberate themselves from the bondage of the material world. To put succinctly, Siva protects the souls from pain and suffering that is generated by the unhealthy universe.

Shiva - The Giver
Lord Shiva is known as the ''giver god'', lord of mercy and kindness. He always protects his devotees from evil forces like lust, greed and anger. He is the most kind -hearted God who grants boons and bestows grace to his devotees.

Shiva - The Image
Lord Shiva has the unclad body covered with ashes symbolizing the transcendental aspect of the universe. Siva's three matted locks represent the integration of the mental, physical and spiritual energies. The crescent moon becomes the part of lord's ornament symbolizing the time cycle through which creation evolves from the beginning to the end. The three eyes of Lord Shiva suggest: the Sun is his right eye, the Moon is the left eye and fire, the third eye.

The Snake around his neck symbolizes the yogic power, which he uses to dissolve and recreate the universe. The Rudraksha necklace worn by the lord shows that he uses his celestial powers without compromise,to maintain law and order. The trishula (trident), symbolizes the Lord's three fundamental powers of will (iccha), action (kriya) and knowledge (gyana).The damaru (drum) and its two sides separated from each other symbolizes the two entirely dissimilar states of existence, invisible and evident.

The bull, Nandi is linked with Shiva and it is considered as his vehicle. The bull symbolizes both power and ignorance. Tiger's skin makes Lord Shiva's clothing and his seat, which illustrates the idea that he is the source of potential energy during the dissolution of the universe. Thus, Lord Shiva is well-regarded as the ultimate organizer of the birth and death in the corporeal world.

Shiva - The Lingam
Shiva is worshipped in his invisible and an unborn form, known as the lingam. Lingam is always accompanied by the Yoni, which is the female part, adjoining the base of the lingam. The lingam symbolizes the male creative power of Shiva. 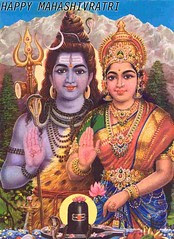 
To my friends well wishers ..


Lord Shiva or Siva is considered as the destroyer of the world. Shiv is one of the most popular Gods of the Hindu religion. Shiva is one of the complex gods who is rudra as well as kind-hearted, simultaneously. Mantra of Hindu God Shiva forms the part of prayers offered to the lord. Shiv or Shiva Mantras are as follows:

Meaning: Lord Shiva is the consort of Uma (Parvati). Shiva is the divine Guru, the source of the universe. Lord Shiva is decked with snake and wears tiger skin. He is the Lord of all creatures. The three eyes of the lord represent the Sun, Moon and Fire. Shiva is near to Lord Vishnu. Lord Shiva protects all of his devotees. He is the benefactor of boons. We surrender ourselves again and again to Lord Shiva.

Meaning: Lord Mahadeva (Shiva) has conquered death. He is the destructive force of the universe. He has a blue neck and he gives happiness to all. We pray to the kind-hearted lord, Shiv-Shambhu.

Meaning: Lord Kaamaarey (another name for Lord Shiva) protects us from the evil. He is the consort of Gauri, the mother goddess. He drank the "Kaala Koota" poison (which was the outcome of the ocean churning). He isthe destroyer of the three cities. We seek protection at the feet of Lord Shiva.

This is a very powerful chant dedicated to Lord Shiva. This mantra is believed to be the death conquering mantra and is found in the Rig Veda. The mantra is sometimes also referred to as the Mrita-Sanjivini mantra as it has the power to restore life in a dying person. In this potent mantrathe lord is referred to as the three eyed god. It is a plea to him to restore life in the dying body. Worshipping the lord will liberate one from death just like the ripe cucumber is separated from the binding stalk.

O Lord Shiva you are the one who has conquered death and are responsible for destruction of the Universe to let life again prevail on earth. O lord you are Neelkantha as you have a blue throat. We pay obeisance to you O lord with are hands folded in namaskar.


Meaning: Lord Shiva is seated on Mount Kailash; his forehead is decked with the moon and the king of serpents as a crown. The lord is full of compassion and the remover of illusion. Shiva is the only protector. I surrender myself to such great Lord Shiv-Shankar. 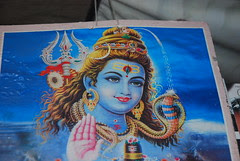 Mahashivratri 2012, a photo by firoze shakir photographerno1 on Flickr.

Festival of Mahashivaratri is the most important festival for the millions of devotees of Lord Shiva. The festival has been accorded lot of significance in Hindu mythology. It says that a devotee who performs sincere worship of Lord Shiva on the auspicious day of Shivratri is absolved of sins and attains moksha.

Significance of Shivaratri in Hinduism
Festival of Mahashivaratri has tremendous significance in Hinduism. According to sacred scriptures, ritual worship of Lord Shiva on Shivratri festival that falls on the 14th day of the dark fortnight in the month of Phalgun pleases Lord Shiva the most. This fact is said to have been declared by Lord Shiva himself, when his consort Parvati asked him as to which ritual performed by his devotees pleases him the most.

Even till date, devotees of Lord Shiva perform the ritual worship of Shivratri with care and devotion. They observe day and nigh fast and give sacred bath to Shiva Linga with honey, milk, water etc. Hindus consider it extremely auspicious to worship Lord Shiva on a Shivaratri as it is believed that worship of Lord Shiva with devotion and sincerity absolves a devotee of past sins. The devotee reaches the abode of Lord Shanker and lives there happily. He is also liberated from the cycle of birth and death and attains moksha or salvation.

Significance of Shivaratri for Women
Mahashivratri Festival is also considered to be an extremely significant festival by women. Married and unmarried women observe fast and perform Shiva Puja with sincerity to appease Goddess Parvati who is also regarded as ‘Gaura’ - one who bestows marital bliss and long and prosperous married life. Unmarried women also pray for a husband like Lord Shiva who is regarded as the ideal husband.

An American Who Shoots India Like No One Does ,..Dr Glenn Losack MD

Zaira Nerjis And Marziya Shakir - Three Souls In One, a photo by firoze shakir photographerno1 on Flickr.

The only thing that distinguishes her from my other two grand kids is her unique subtle smile and her very pretty face and demeanor, Nerjis Asif Shakir and Marziya are pretty too, but Zaira Saif Shakr is timelessly sculpted beauty in alabaster..

Zaira and I well we are related thickly by blood and more than anyone on the universe Zaira loves her father my youngest son obedient devoted caring Saif Shakir..he loves her mother but she is more animated towards her father ...

My Poems Are Silent Blank Like My Street Pictures 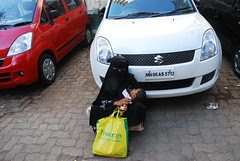 My Poems Are Silent Blank Like My Street Pictures, a photo by firoze shakir photographerno1 on Flickr.
By Firoze Shakir Photographer No1 - February 20, 2012

Within Her Veil ..Was Her Tragic Tale ..Doomed Derailed 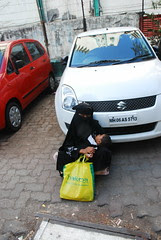 Within Her Veil ..Was Her Tragic Tale ..Doomed Derailed, a photo by firoze shakir photographerno1 on Flickr.
By Firoze Shakir Photographer No1 - February 20, 2012 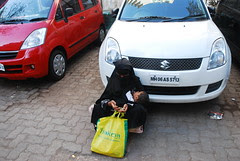 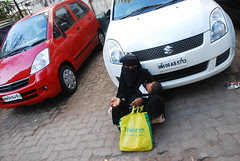 Those Eyes Penetrated My Soul ..Bol Shakir Bol, a photo by firoze shakir photographerno1 on Flickr. 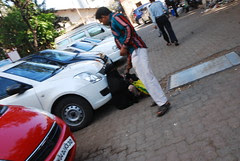 Muslim Women Are Forced To Beg Because Muslim Society Has No Time For Them Or Their Pain, a photo by firoze shakir photographerno1 on Flickr.

Our Muslim spiritual leaders are busy building lofty houses of God , madrsas , trying to revive the haunting bloody memory of a Babri Mosque a dead mosque that was the cause of inconsolable tears on the soul of Humanity on the soul of my Beloved Mother India..

As a beggar poet a human being it saddens me misguided values buying a Rs 5 lac Goat to appease the Maker is more important on Eid than giving hope to blind children, widowed mothers and the living dead in our community as a street photographer I have shot the Muslim beggar as my poetic expression of pain.

I am a Shia does not mean I am less Indian less Muslim or less human.. I am a citizen of the World what happens in Sudan Somalia Dafur hurts me too, what happens in Syria Bahrain touches the core of my beliefs .. power lust for power and power politics fuel wars at the expense of innocent citizens sent to the gallows to keep the juggernaut of imperialistic hegemony alive ..

There is pain all over the globe but the pain on the street where I live the pain that stalks me as beggar lady and her child close to the depth of field of my poetry of life kills me every second every minute every day.. Yes I shoot beggars ..I dont sell my pictures I dont publish my pictures I am too broke to ever be published .. publishing houses need whores and I cant open my legs to them....

I am a blogger I am read seen and heard
.. I reside in the residue of a word
i am featherless broken winged bird
i am a one finger typing cybernetic nerd
once the richness of milk now turned to curd

Pictures Shot on Canon EOS 7D , a set on Flickr.