The Eunuch Goat of Moti Katla

Legalizing Gay Sex and the Hijra

She requested me not to shoot her picture , she had a few days back got married to her toy boy,they had come to Ajmer Sharif to place a chaddar on the fulfillment of their marital bliss and were really taken in by each other.
This was much before gay sex became legal in Delhi..I told her I would shoot her back, she agreed , and I have not directed the shot ..it is natural and spontaneous as you can see ..

Now Gay Sex is became an issue with the Catholics they say it is against the nature of man and god, it should be banned., the Muslims the Hindu right wingers all are up in arms..including the Sikhs.

However Article 377 the draconian sodomy law is against the fundamental right of man as far consensual same sex goes..it was a guilt of the fucked Englishman dumped on the soul of our nation, a nation that gave the entire world the manual to make sex without just being missionary..we gave them Kama Sutra ,they turned it upside down and gave it back to us as porn..this is what you call the western mans sense of ingratitude and sick sense of toilet humor.

Well I am ambivalent but as a friend of the hijras ,a marginalized society of untouchables I feel its time we became more mature more tolerant to changing times..gave people the basic rights to live they want to live without hurting the sentiments of the nation, terrorism is worse than issues of same sex, or gay sex , they should be bought under the scanner..

Homosexuality has always been there and will always be there law or no law , it has survived 149 years of being criminalized , I think making it legal was the mature and finest acumen of judgment on the part of the erstwhile judges of the Delhi High Court.

At The Gates of Hope and Harmony 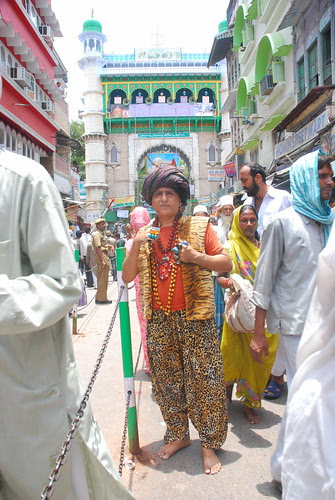 At The Gates of Hope and Harmony, originally uploaded by firoze shakir photographerno1.
By Firoze Shakir Photographer No1 - July 05, 2009 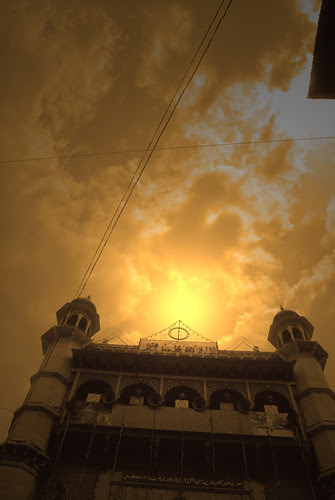 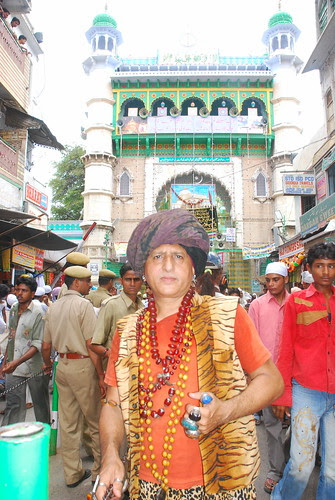 Behind me is the Bulund Darwaza , within its passageway lies the Holy Shriine of Khwajah Moinuddin Chishty al Sabri..on top of the Bulund Darwaza on a normal day you can read the words of the Holy Saint embedded in every Shia person s soul, including the souls of those who love Imam Hussain the Apostle of Freedom from Tyranny.


Imam Hussain was the grandson of the Holy Prophet of Islam who was brutally and inhumanly Martyred on the bleeding sands of Karbala.His father was Hazrat Ali ibn e Talib..Most of the Sufis consider Ali the Lion of Allah to be the source of Sufism.

Qawwalis to the Holy Saint begin with Ali..the most famous being
Man Kunto Maula made famous by late Nusrat Fateh Ali Khan Qawwal

Shah-E-Mardaan, (King Of The Brave)
Shair-E-Yazdaan, (The Lion Of God)
Qoowwat-E-Parwardigaar (The Strength For God)
La Fata Illa Ali, (There Is None Like Ali)
La Saif Illa Zulfiqaar (There Is No Sword Like Zulfiqaar) 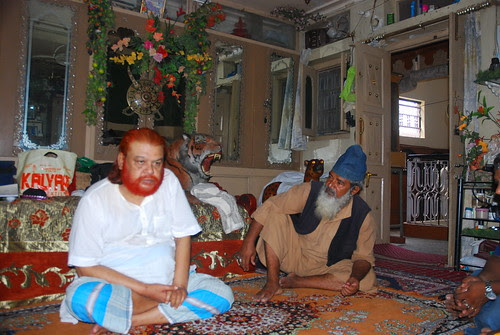 Peersaab Fakhru Miya is a Sunni scholar, well versed in Sufism, Shiasm , who respects all religiosity, most of his hardcore disciples and followers are Hindus, he is not into conversion, the Hindus follow their own religiosity but have added Sufism as a part of their journey of life.

He has his sitting within the Holy Shrine it is called Hujra No6 , you enter it from Bulund Darwaza..I have stayed in this private chamber as his guest at his house , he has treated me like family, every trip that I have made to Ajmer , mostly during the Urus.
It is through Peersaab I saw Pushkar Brahma Mandir a few years back, he was the one who translated one of my dreams , and said Brahma wanted me to visit him ..I had a Sadhu Pandit as my guide who is the custodian of a 750 year old Hanuman Mandir also at Ajmer.

For Saif Shakir my youngest sons wedding reception , Peersaab was there to bless him ..so you can now see that his contribution to my life has been immense.

One of the very closest Murid of Peersaab is Zaved Akthar and his wife Afreen from Bangla Desh , so Peersaab has a lot of followers in Bangla Desh too.

Sheetal Bawa from Indore , Ramesh Bhai from Pune , and so many others are there to be by his side during the Ajmer Urus.

There are some very interesting people I have met at Peersaabs hujra no6, but the most amazing experience of my life was shooting the Whirling Dervesh of Ajmer at a event celebrated on the eve of Chatti on the terrace of his house..I was totally new to this choreographed moment of high never felt before...I have decided to learn this form as I too go into a trance called Kaiff.

Peersaabs grand children are Ahmed Ali and Zam Zam, totally in control, and inheritors of his legacy and wealth of his wisdom.
His two sons are the pillars of his Hujra No6 .. the eldest Farid Miya and the younger one Qambar Miya.

They tried to get me the permission within the Dargah but it was turned down citing terrorism as one of the reasons, and the gentleman in charge of the permissions, who saw my application and picture thought I was a girl and was a security risk..

Anyway in spite of his shortsightedness in just 1 day and one night I had shot a 12 GB card , subjects being the beggars, rafaees , the hijras and street photography.

This is the beginning of my second 4 GB card ..and I dedicate this post to Peersaab..
I ate all my meals including breakfast at his house..during my stay in Ajmer..

The only stuff I bought from Ajmer from Kapil Agarwals gemstone shop are Dure Najaf , that Kapil said were a pair, Shiva and Parvati and some rectangular agates.. or Sulaimani Akik..

I bought nothing else.

Also I must mention here the most interesting Murid of Peersaab is Zubair Bawa , a great lover of Imam Husaain who publicly curses the enemies and killers of this beloved Imam , the martyred grand son of the Holy Prophet of Islam.

Zubair Bawa has 200 names given to him by his followers mostly lesser malangs and hijras.

I normally dont view the pictures I shoot till I post them at Flickr ..I have not seen the pictures of the Dancing Dervesh but I have a gut feeling they are my best effort in unlearning photography.