The Hijda Rafaee is a transgender who was in the procession of the Sandal of Fakhrudin Shah Baba , he was along with the Chancawalli Rafaees and Handi the Head of the Chancawalli Rafaeeas did not like my photographing him, a clear distaste that Handi did not hide..
I was surprised as I know in Ajmer the Hijda Bawas and the Rafaees get along pretty well ...He the Hijda Rafaee did not seem to be bothered by Handis insulting remarks , and he was wearinga gents coat and trousers unlike the Hijdas who dress as women..
it was his masculine side spiritually displayed.. I took two shots . 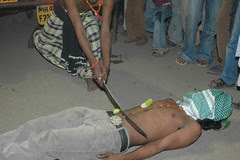 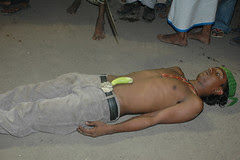 The cucumber is placed on the belly of another Rafaee and Mohomed Rafaee slashes it into two halves with his sword -in the next picture..

Moharam means different things to different people.
Moharam is the new year.
Moharam means remembering the rebirrth of Islam cleansed by the blood of its martyrs, led by a single man called Hussain on the burning sands of Karbala.
Moharam is a page tattered and torn by Yazidiyat, a black page in the history of Imam.Some call this a political battle , yes the Caliphs in the name of Islam did vie for political power, a power they needed desperately , a power that Imam Hussain the grandson of the Holy Prophet did not need.
If he needed political supremacy than I think the Battle of Karbala was uncalled for he should have shook hands with Yazid and history would have been read differently.
Moharam is a month that brings forth all these thoughts , throws us back into time , our earliest childhood memories.
This is what seperates a Shia Child from the child of the majority community.
Moharam is memories that live and relive year afrer year.It has the brilliance not found in any other Muslim feast on the Calendar .
We remember Idd, our first Roza, we remember Bakra Idd the Bakra bought to the house for slaughter, but Moharam we remember through Bakra Idd too, because here to the slaughter is depicted vividly, and as we watch the butcher place the knife on the Goats throat, that has had its last drink of water, we remember Hussain and Shimr straddled above him decapitating his head , the same neck that was kissed many a times by the Holy Prophet and his daughter Princess Fatima..
Yes Moharam we can never forget it is embedded in our cosmic comciousness passed on from mother to daughter , father to son.Yes you have to be a Shia to understand our Pain, our immortal tears , for the outsider it is an event , but for us Shias Moharam is a state of Mind.Its a continuance of a Pledge.A pledge that is marked as Hussainiyat.
A Shia child from the day sheis born or he is born is carried by the mother to the Majlis, Matam, and this grief becomes part of the childs Heritage.
Yes this is Moharam, its my grandaughters first Moharam, and I am shedding tears as I write this..This spontaneous shedding of tears of a grandfather is called Moharam.. and I can imagine what the Grandfather the Holy Prophet felt when he saw Hussain for the first time.. and when he looked at the snow white neck already silhouetted with the traces of blood.. Yes this is Moharam..
The Shias are a unique race and I am proud that my Grandfather a Sunni born accepted Ahle Bayth gave up his ancestry , his home his wealth.. my father too followed the tenets of his father , so did I and there is no looking back..
Yes this is Marziya Shakirs first Moharam..
We have come a very long way..and Karbala is not very far its waters drop and flow from the pitchers of our eyes..
Yes Ya Hussain two words that surmise the meaning of Moharam..
Ghame Hussain , the Tragedy of Karbala is our path that brings us closer to our Maker..
Shah ast Hussain, Baad Shah ast Hussain,
Deen ast Hussain, Deen Panah ast Hussain,
Sar dad na daad dast, dar daste Yazeed,
Haqqah ke binaaye La Ilaha ast Hussain!

India -A Pearl in an Oyster 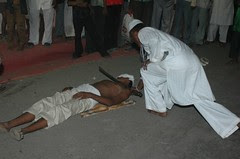 This was a different Rafaee troupe that displayed there genre of body piercing at the Darhah of Fakhruddin Shah Baba .
I shot a few frames rapidly, the wound was healed witrh the Holy Smoke of the Loban seen in the next following pictures.