Baby Hijra Guru And Me at The Foot of Malangad Mountains

Baby Hijra Guru And Me at The Foot of Malangad Mountains, originally uploaded by firoze shakir photographerno1.

Baby Hijra Guru is from Park Site Vikhroli and we have been friends since we first met at the All India Hijda Sammelan in Mumbai.


This is my new set at Flickr .com Hijras at Haji Malang 2011 and respectfully I dedicate this set to my Hijra Guru Laxmi Narayan Tripathi...

In the picture the most beautiful dignified hijra in the world Khushi of Mumbai.. 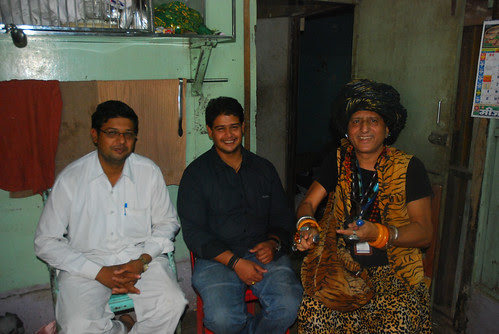 This set of my Haji Malang trek is a tribute to the memory of Aiee Mrs Saroj Gopal Ketkar late mother of Kumar Abhijeet Ketkar Rani ..the Ketkars are a joint family who are Hindu Khadims of the Holy Shrine since several generations .


This is my humble tribute to Aiee mother of one side of Ketkar family I am close to, a very kind soul a very warm human being I had the good luck of being blessed by her .. at Abhijeets wedding.

And my connection with this Ketkar family would have not been possible without my dearest friend Sakib of Mahim,

And on a very sad note this is the last and final time of my bond with the Haji Malang Holy Shrine ..I have vowed never to return to this Paradise ever again..And it hurts but my self respect as a human being who respects all religiosity was put to test by a trustee of the Holy Shrine . he was totally inhospitable rude and his attitude not in keeping with the tenets of peace hope and harmony as preached by the Holy Malang who is a Saint highly respected liked by people of all faith caste color and creed.

Haji Malang is a lesson in Hindu Muslim amity not found anywhere in the world Hindu Khadims serving a Muslim Sufi Saint with impeccable devotion..along with Muslim Khadims in total service to Humanity.,

For those who dont know me I think it is important they read this an Introduction to my new Set Haji Malang 2011.


I am not a Sufi adherent , but I have a Sufi mijaz or temperament and spirituality of a man who shoots all faith and I dont need to give testimony or evidence of the same ..170270 images om photo stream at Flickr is my claim to humanity.


I have never demeaned any religion its rituals or culture and I shoot as a hobbyist I dont sell my pictures nor do I have a sponsor or the financial support to shoot pictures, I am a Shia Muslim who proudly calls himself a Shia Hindu.I shoot Shiasm and Hinduism Christianity Sufism Rafaees Naga Sadhius and the disfranchised beggars hijras and the homeless.


On the day of the Dhamal I was approached by a trustee of Haji Malang who felt I gave more importance to the hijras at Haji Malang and it was not in good taste . I told him in no simple words and humility I shot what I saw and both Ajmer Sharif and Haji Malang are the two prominent places that the Hijras worship as they are treated on par as Humans and if he felt that hijras were a bad influence he should ban them from Haji Malang but than the Hijras as per records have been connected to this Shrine from a very long time and the poor hijras are given sustenace to by the Haji Malang Trust I was told.. , and regarding his narrow mindedness I told him to have his own website where he could upload his version of the Holy Shrine.

I was really upset instead of being grateful to my documentary of the Holy Shrine year after year without any profit gain or agenda, the Hijras at Haji Malang in a separate the Holy Haji Malanng its surroundings rituals in separate set he was accusing me unjustifiably.

I swore on my Holy Koran I was really mad that I would never ever visit Haji Malang Dargah ever again..I walked down the mountains but Abdullah Baba a young spiritual leader of great standing from Kalyan , Rahim Bhai Iqbal bhai and Sakib told me to calm down I stayed back but did not shoot the Dhamal last night.

Today is Sultan Shah Babas Sandal I gave it a skip and walked down the mountains barefeet , I had climbed the mountain barefeet too, I am a diabetic but I know no harm will come to me as my intentions are positive and my conscience is clear.

I thought the world should know my side of a story , I leave my work my family to shoot humanity and the peaceful cultural ethos ..and to be treated as such by a trustee is uncalled for out of respect to the Holy Saint I have not mentioned the Trustees name.

In the picture are Kumar Ketkar Abhijeet Ketkar and the barefeet blogger of Mumbai.. at Haji Malang.

There is another set of Ketkar family that handles the Dargah..I have cordial relations with them..