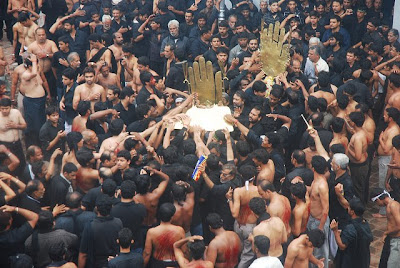 I welcome the decision of Flickr Support in restricting the contents of my Moharam in Chennai set because of the graphic nature of some of the rituals I shot which is part of a 1400 year tradition of the Shias...but blood gore is not considered as safe for viewing as per Flick terms and conditions that I adhere too .

So those who are Shias and wish to view the same will have to join in as member which is free.

Ps
I have a Shia website Shah Ast Hussain but uploading would cost a bomb hence I use Flickr which is more generous and economic to pro members like me who blog prolifically..

The Moharam in Chennai set is over 800 pictures till date.
By Firoze Shakir Photographer No1 - December 22, 2010

We Are Called Shias Followers of Truth and Humanity 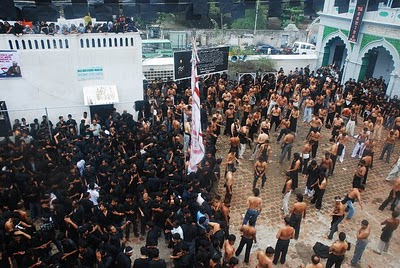 if you dissect a tear
falling from our eye
you will see ashura
karbala hope
when we cry
our blood that
we shed
on the face
of yazidiyat dries
flowing into '
the soul of paradise
covered in black clothes
or bare .. we are
shias at
the 1000 lights
mosque in chennai


shot by a photographer
with a bleeding head
from mumbai
By Firoze Shakir Photographer No1 - December 22, 2010