Jesus Was Once Again Crucified In West Bengal 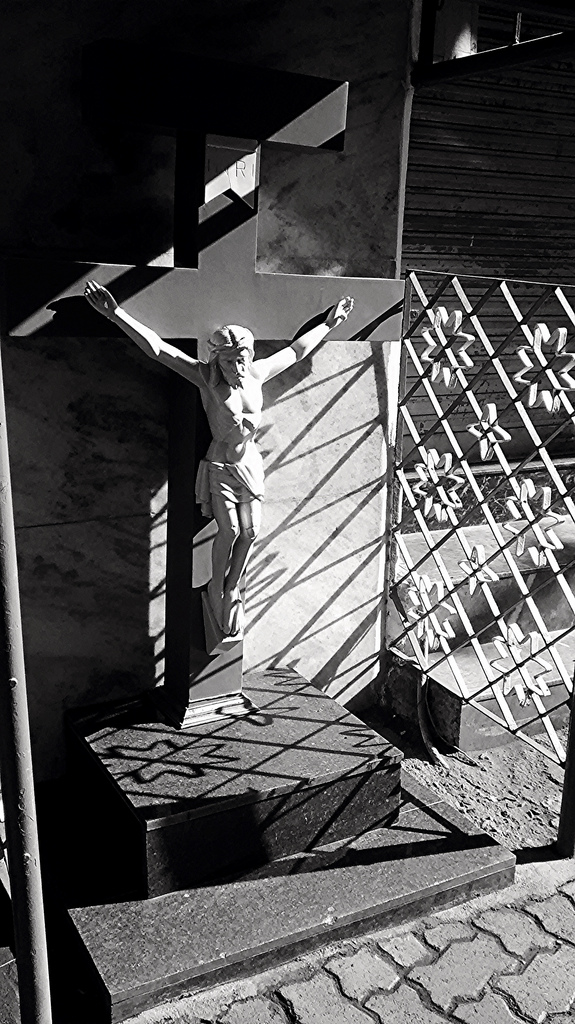 In the Land Of Mamta Mothers love
turned heinous by wild depraved
animals the final assault as 71 year
old nun Indias daughter grieves the
Lord She Calls ,, forgives her rapists
after being battered sexually mauled
in our system there is a genetic fault
because of a few of these animals
the world sees us as rapists by default
Sab ka sath sab ka vikas when will this
halt .. good days are million light years
away every new incident a new jolt
jesus on the cross bleeds again now
nailed severely as governance all over
our beloved motherland somersaults
By Firoze Shakir Photographer No1 - March 17, 2015 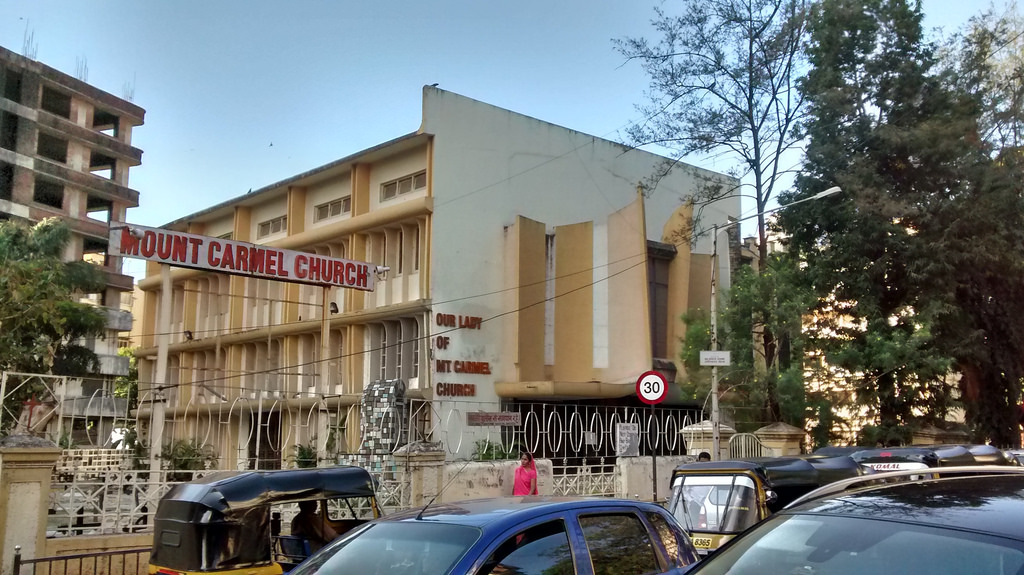 The Church of Our Lady of Mount Carmel, Bandra is a Roman Catholic church in Bandra, Mumbai. It was built in 1894 by Jesuit Missionaries. As the catholic population in Bandra increased in the latter half of the 20th century, a new modern structure was constructed in its place. The new church was blessed and inaugurated on 11 February 1981 by Archbishop Simon Pimenta, Archbishop of Bombay.

History[edit]
The authorities of St Andrew Church and Mount Mary Chapel in Bandra provided land for the erection of the church in 1894 to cater to the 215 families living in the present Chapel Road and Bazaar Road areas that were separated in 1891 from the St Peter Church (then under the Propaganda Jurisdiction) with the permission of the Holy See (Rome). The church was built on the banks of the Mahim creek opposite the ‘Customs House’ which still exists today in front of the church, although the creek was reclaimed to form the current Bandra Reclamation locality. The foundation stone was laid on 7 February 1892 by Antonio Pedro Da Costa, Bishop Of Daman, who also blessed the completed church on 1 June 1894. Fr Pio Ellias Saldanha was the first Parish Priest of the church. The need for a new and larger church was felt in the 1960s as more Catholics had moved into the area and in 1975 Cardinal Valerian Gracias, Archbishop of Bombay, laid the foundation stone of the new church building.[1]

§Structure[edit]
§Original church[edit]
The main altar of the original church was obtained from one of the ancient, ruined churches of Diu. The original parishioners who were fisher folk contributed towards the building of the church, transporting stones and other construction materials in their fishing boats to the building site.

§The new church[edit]
The new church was constructed in keeping with the post–conciliar spirit of the Second Vatican Council. For example, the sanctuary is not separated from the body of the church by communion rails, which was a feature in older churches. It is characterized by an absence of clutter and is well-ventilated. The rough and rustic stone backdrop of the sanctuary provides a background for the large cross and crucifix which has been carved from a single tree. The altar table and lectern have a geometrical design with slender proportions, constructed of black and ruby- red granite. the top of the altar is a single block of granite. There is no statue in the sanctuary apart from the large crucifix and there are relatively few other statues in the church.

The cantilevered canopy at the entrance of the church is designed to symbolize two hands joined in prayer, with a cross in the centre. The church's large windows that provide cross ventilation have vertical R.C.C. fins between them that act as sun- breakers, giving the church exterior a unique appearance. The architect of the new church was a parishioner, Charles F. Sobrinho.

The Lonely Garbage Bin.. Every Morning Gets Hit On The Chin 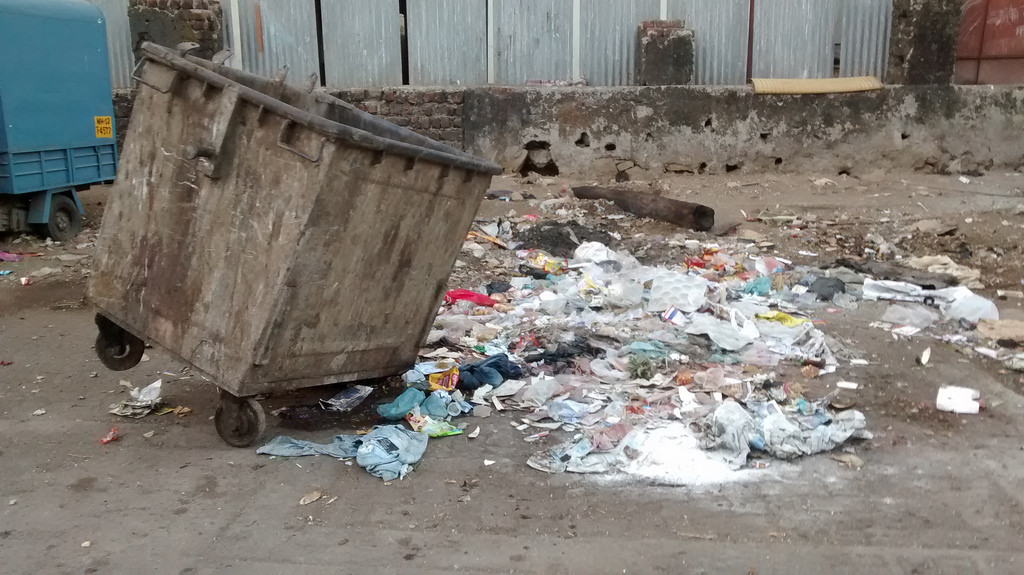 a raging battle
it cannot win
stuck in one
corner at
bandra
reclamation
it cannot go
on a spin
its frail body
looks like iron
but made of
corrugated tin
throwing garbage
is a sin..but yet
they throw it out
of the bin never
in..leftovers
onion potato
skin the stink
of fish prawns
a varied collection
used condoms
sanitary napkins
across the street
uncle joe plays
the old violin
hello out there
hits of humperdinck
bandra residents
garbage pelters
need to be
disciplined 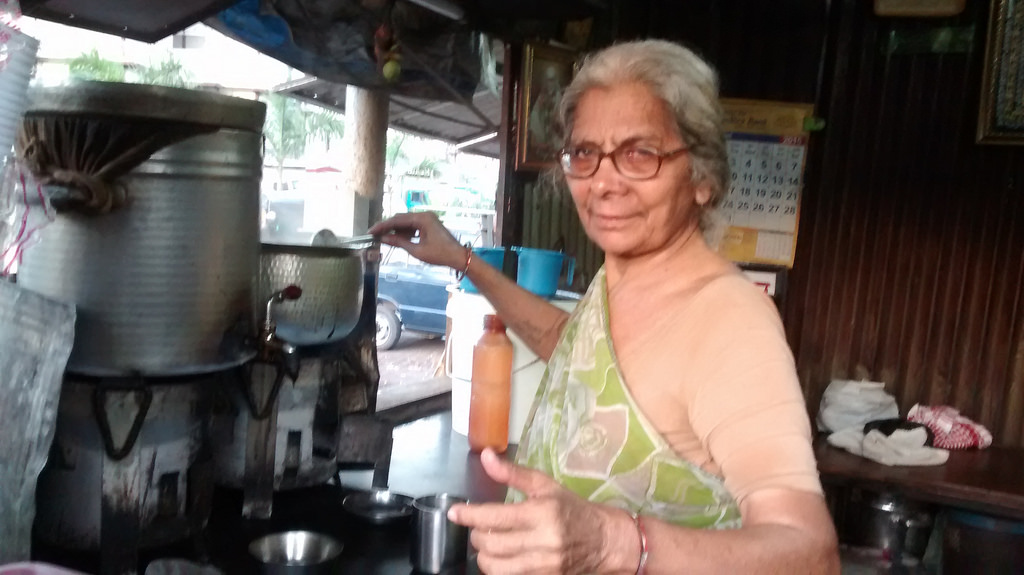 This morning while she was serving tea to the rickshawallas her main clients I shot a few pictures , and than she requested me to have some tea I thought refusing her would look bad and not wanting to hurt her feelings and her hospitality I took a tiny bit in a plastic glass , less than a cutting .Now you must believe me that there are perhaps two or three male chaiwalas on the same stretch people gather here for her tea, because it was simply out of the world .unlike the shoddy tea that you get blackish brown at other tea joints with a syrupy taste .her tea was divine being a lady and a tea seller she served her tea the way she would make it for herself.

So after finishing my tea  I walked to the MET grounds  though I walk on an empty stomach everyday..

This morning I walked  7 km and came home via Chapel Road shooting the various Christian crosses till my house .. than I met a Muslim beggar an old man he was in a bad state I thought I would bring him some food from my house , but Advocate Ashish Shelar saw me assisting him and gave him Rs 100 ..
More than money these old migrant beggars need compassion. I will talk to him tomorrow morning and than you the story of his life provided I remember his name ,, I am bad with names.
By Firoze Shakir Photographer No1 - March 17, 2015 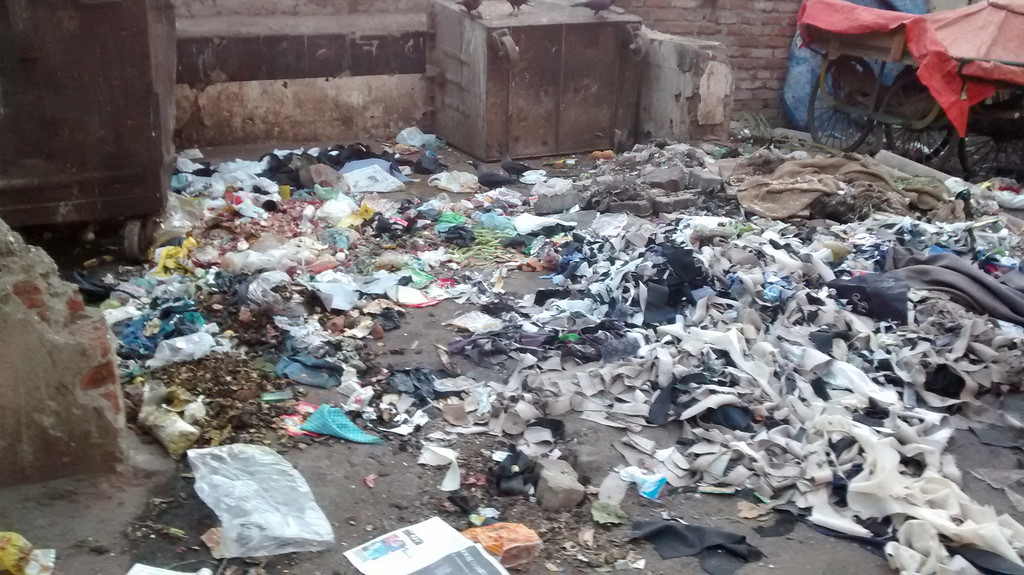 he was up earlier than me
grooming his garden as i
was about to pass by
his face red puffed up
drunken morbidly high
he asked me you guys
really generate garbage
fasten than the blink of
the eye ..why ,,i told him
you are the lord the only
chosen lord of the flies
every morning you are
fed dressed cleaned
i did not wish to pry
but i shoot your temple
every morning as my
tribute to your followers
bandra bazar residents
demand and supply
the crows cawing
adding a chorus
of respect as reply
they bid me goodbye
a fat bandicoot in one
corner cursing grunting
no beef no beef no beef
with a huff puff and a cry
why have the politicians
added misery to what he
ate deliciously now a meat
vilified .he looked terrified 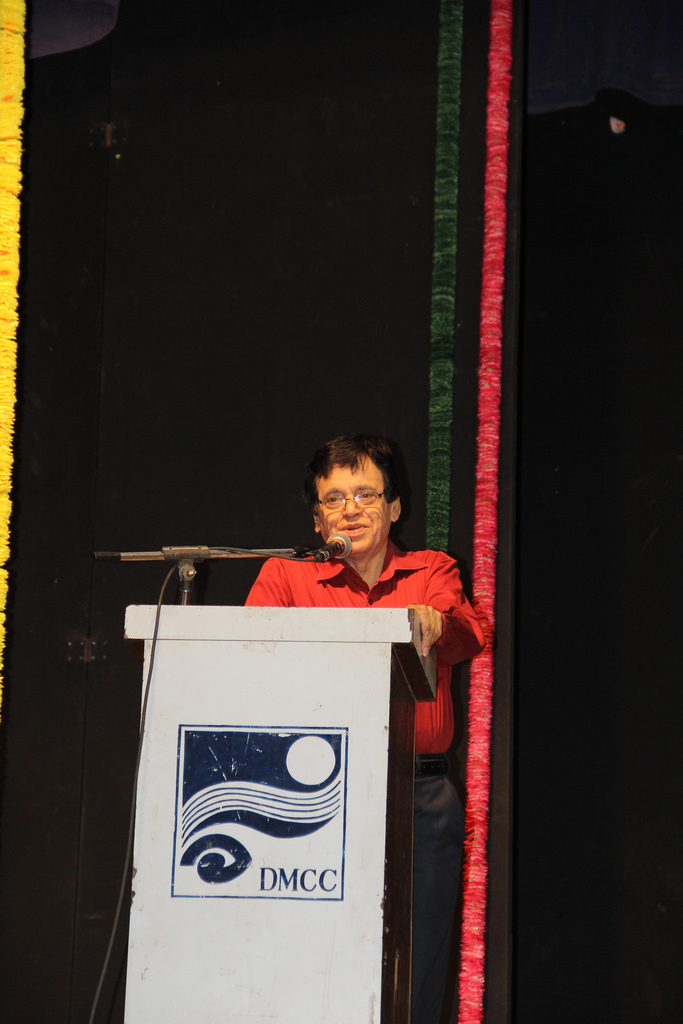 all pictures of release
By Firoze Shakir Photographer No1 - March 17, 2015 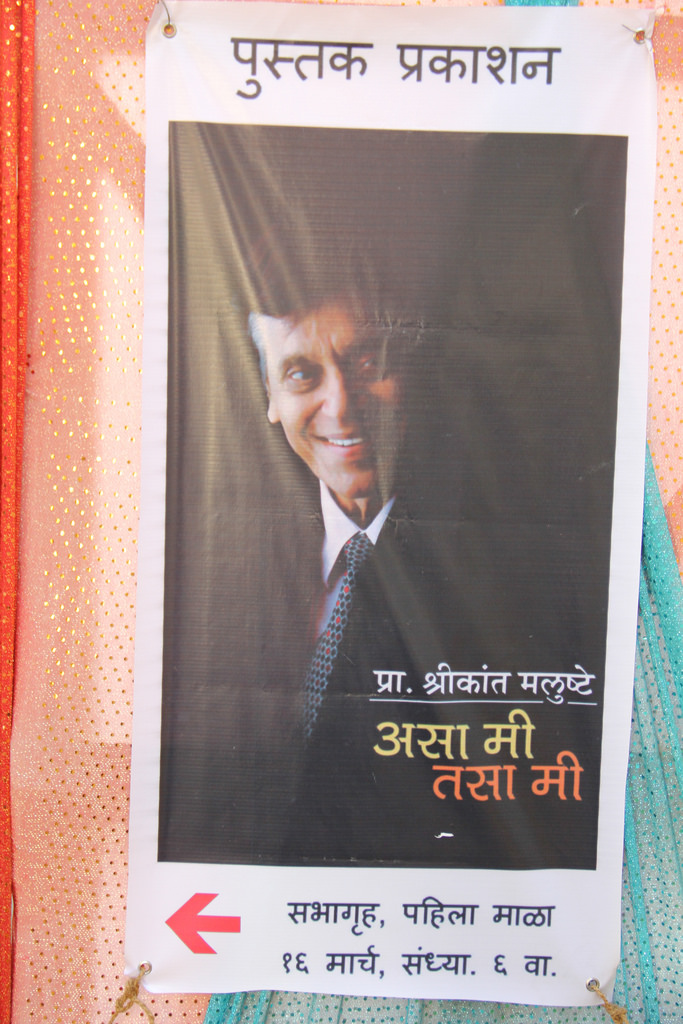 This evening I was invited by Mr Shreekant Malushte my photography Guru teacher for the release of his second book Asa Mi Tasa Mi at Matunga Cultural Center .. at  6 PM.

So I took a cab from Bandra and was there at about 5.30 pm . I met  my Guru thanked him and was here till 8 pm , it was his book  release under the hands of some of the great doyens of Maharashtra ..primarily Mr Madhu Mangesh Karnik and others .
There were speeches and each guest spoke about Mr Maludshtes contribution to fine art photography and photo journalism.

The Book is in Marathi prized at Rs 250 .
A lot of ex students friends of Mr Malushte had come to be part of his book release and his son Himanshu made sure that it was a success , Mrs Malushte too looked proud and happy the strength behind Mr  Shreekanth Malushtes journey from Maharashtra Colleg as professor to his Snap Institute that teaches digital photography  less theory more practicals and outings ,, I believe Mr Malushte has mentioned me in his book..

I took up photography to give up my chronic alcoholism , and now its been over 17 years after taking the camera in my hands I have never touched alcohol or cigarettes.

And photography I found is more intoxicating than alcohol , I began photography with a film camera and Mr Malushte helped me along taking me to Manor , Konkan and various outings at Alibagh bullock cart race , Murud Janjira.
Various Hindu festivals Ganpati Govinda and ..inspired by him I shot the Nasik Kumbh , Battis Shirala Snake Festival and the recent Maha Kumbh.

What I learnt from Mr Malushte , I bequeathed to both my grand daughters Marziya Shakir now 7 blessed by Mr Malushte shoots the streets beggars on Canon 7D  with vertical grip , Marziya has been shooting pictures including Mr Rajesh Khanna since she was 3 year old .

Nerjis Asif Shakir now 3 year old blessed by Mr Malushte shoots on Canon 60 D she shoots beggars hijras , she has shot Mr Prem Chopra and most of the Hindu festivals in Bandra including St Peter Church.

And all this is because of Mr Malushte .. and here I must mention my other two Gurus who I met through Mr Shreekant Malushte .. late Mr BW Jatkar and Late Mr KG Maheshwari..

And so I left the function along with an old friend also a student of Mr Malushte .. Umesh Salgaonkar ,, I went to his house to meet his son Yash and his wife .. after almost 12 years.

I met many friends at the book release and if I begin naming them it wont end but a few like Ganesh from Ratnagiri Gangan , Pradip Salgaonkar , Vishwas Morye , Venay Paralkar Lotankar , Chitra Gokhle Vilas Ghosle and Mr Prasad Pawaskar respected Secretary PSI Mumbai.

And this is my new set series at Flickr.com

Garbage Greets Me Every Morning When I Go For My Walk 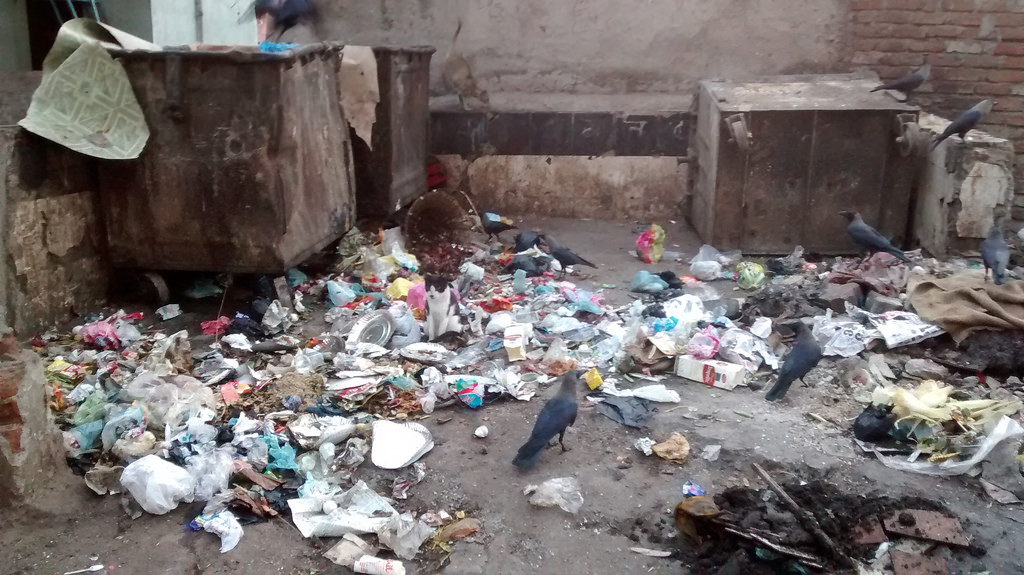 Garbage looks me straight
in the eye ..without flinching
tells me Beggar Poet Hi as
I have now started seeing it
as an Art Form it blushes
like a school girl very shy
proud of its essence a
prime ministerial pardon
swach bharat do or die
if hates those bandra
residents that mess up
its surroundings throwing
plastic bags full of leftovers
on the sly hoping that one
day this  garbage site  will die
than in the morning come
the municipal conservancy staff
minus gloves in rubber slippers
no masks clean up deck it up
all good guys but no sooner
have they gone the resident
dump more plastic bags tells
the garbage angry with a sigh
as the bins begin to cry ..bandra
bazar dump the ugliest place
in the suburbs a thought you
wont deny,,a temple built by
the people to appease the
lord of the flies ..rats cats
mice dogs crows goats
drugaddict ragpickers
all faithful followers
of this earthly paradise
dengue  free bandra
a congress brochure
that got stymied
the new powers to be
The BJP...more bad
days says the garbage
a pain it cannot hide ,,

Advocate Ashish Shelar
Ms Poonan Mahajan
on the  other side ..
a garbage site unnecessarily
deified seeking sorrow
as its mentor its guide

This site is bang opposite our Respected MLA  Advocate Ashish Shelars BJP Office where I offer my prayers before setting out for my walk at MET Cricket Grounds ..
By Firoze Shakir Photographer No1 - March 17, 2015