These are the words that you hear on the streets of Bandra at dawn sung by the Awakeners Muslim mendicants who do selfless service waking up Muslims to start their fast and Sehri.
For 11 years I sincerely documented the season of Piety Charity that we call Ramzan where poetically speaking God comes down on Earth to be with his loved ones.
His lost tribe of beggars and you will find them outside every Mosque during Taravee.
Mostly women and children and somehow I think Ramzan is the Feast of the Poor the homeless fasting and united in piety and prayer.
I have documented Muslim beggars and this lady in the picture for over 11 years too as I mentioned in earlier posts she has a daughter and two sons her husband is physically challenged does cutting of threads of readymade garments.
To supplement the family's income she used to beg below my house on Friday's.
There are many like her and this period of Ramzan gets them free ration clothes etc.
Earlier I shot the Iftar time of the poor.. The hawkers and even beggars I used to break my fast with the beggars of Bhendi Bazar.
Memorable memories.. Ramzan is a beautiful month that inspires love forgiveness and tolerance and Ramzan keeps even the hot headed Muslim anger in check.
Those who are fasting have to bear all this in mind not eating food water is one aspect of Ramzan.. But being respectful responsible honest truthful charitable are some of the virtues of Ramzan.
Some of my Hindu friends to show their solidarity with Muslims fast too for week or two and this is the greatest power of Ramzan joining Hearts and Souls.
Ramzan a Muslim feast adds hope and love to the surroundings I know Hindu friends who offer Iftar items to beggars outside the Mosque.
That is one reason I love Mumbai the spirit of a collective ethos and togetherness.
My perspective as a human and as a photographer has been Hindu Muslim amity one cannot live without the other..
Our politics in Mumbai is not marred or tarnished by hate for any community.
So in a way this is my first Ramzan post I chose this mother and her child as the Ambassador s of Peace and holistic healing.

The Room With A View ... Falcon Villa Chapel Road 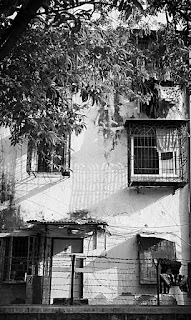 In 2001 when this building was built allegedly on a plot that I am told was a one plus one structure belonging to one of the Falcons with Reddy builder ..the lawyer a Muslim lady living at Falcon Village showed me the picture of that old structure ..

The complainant also a Falcon wrote a post about this illegal building that it was choking the gutters causing unhygienic environment to her property ,,she sent this to Hon PM Mr Narendra Modiji .on his page in 2016 ..

She had got the details from the RTI ..and her main intention was to get this illegal structure demolished ..I only feel sorry fo the residents who got gypped conned ..why did H ward building officials allow this building to come up in the first place ..and Mr Reddy had already come under the scanner one of the buildings opp Kalpana Medical Bandra Bazar was demolished too for being illegal.

I knew Mr Reddy he was a Municipal contractor and when he was constructing the illegal building near Kalpana Medical Bazar Road he was trying give me a shop for my fashion store as surety for a loan of Rs 5 lacs ..I was not interested nor did I have that kind of money....and I think this Falcon builder  Reddy is the same guy .. he was later I saw moving around in a white Merck too.

The residents of the demolished Falcon Villa are sleeping at our Tennis court and using the MET toilets young children women old ladies ..few Muslims too in the Holy Month of Ramzan.

The Gaothan of the humble East Indians original inhabitants of Bandra was robbed usurped by politician builder nexus ,, demolishing old East Indian bungalows giving them peanuts as compensation and thus in the late 80 s 90 s began repair permission outrageously ugly 1 plus 2 edifices ..called channel buildings in collusion with the crooks in the H ward Bandra Municipality one of the channel building was my old house 21 De Monte Street Kamla Bai Sadan.. the builder of this channel repair permission is a famous builder now.

Most of Bandra Bazar Chapel Road and other Gaothan areas were blatantly destroyed thanks to the lenient silent view of Congress satraps ..they did not care at all..The last stand of the East Indians did not work they were pushed further to Uttan Vasai Nalla Sopara .. The Church watched hands folded helpless by the biblical edict Render To Caesar what belongs to Caesar and to God what belongs to God ,,

Most of the famous Christian lawyers had the rich builders politicians as their clients so the East Indian residents pride honor could do nothing .. they just gave up the fight ,,

Than the Wheel of Politics turned Congress was booted out ..Congress Free Bandra bough in BJP progress and development ,, and yet the poor owners of houses in Bandra are at the mercy of the mandarins of H  Ward ,,

Will the officials of H  ward who allowed these illegal buildings to come up 20 years back and who did nothing  but abetted in this illegal construction activity  ..be taken to task by the erstwhile Government of Mr Devendra Fadnavis ,, will the house owners get their money back  or will they get justice ,,

I  reiterate I am not a social activist I dont belong to any political party but yes I am a Bandraite not by birth but by choice ,,,so I shot their video images to reach out to all of you ..

Will The Government do something to stop corruption in this low income building sector ,,

The local representatives are silent ,, even God above is Silent .