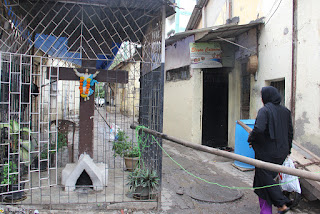 Simply because the rich Sethia Muslims or multi billionaire Muslim politicians never thought of investing their money in Education ..building schools not Madrsas , schools where every community could send their children , and those that did build schools made sure it had a Salafi Wahabbi ethos ,,I would rather be uneducated than go to one of these schools ,,
And so my brothers sisters all went to Catholic schools and frankly they did a good job with us , they broadened our heads in such a way that even the skull cap does not fit us now ,, they made us human and they never ever made us feel we were Muslims ,, Their spirituality did rub off on us but than..it did not make us a bogot or a hate monger .. My sisters brothers have all done well for themselves .. my sisters speak much better English than me , better diction and great command over their treasury of words ..though I read more classic literature .. Both my sons daughters and now all 3 granddaughters are in a Catholic school ,,,and I think my granddaughters shock me .. the 3 year one tells me Grandpa you are Impossible ,, and than I realize all that comes from their I Pads and they wear headscarves hijabs and are as modern as you are ..
I mean no Muslim rich man ever thought of giving the Muslims in Bandra a Fr Agnel kind of vocational school where they could learn a profession or a skill ,, there would be less murder , rape sodomy and robbery , and there would be lesser kids joining the ISIS to kill rape enslave persecute Shias , Hazras , Ahmediyas , Armenian Christians , Coptic Christians and the Kurds ..
So in a way I am happy my parents had foresight never to send me my siblings to a Muslim Madrsa ..and my granddaughters learnt the Koran and Arabic tutored by lady teachers at the Shia Mosque in Bandra ,,
I think looking back now 62 years old I havent done too bad for myself.. my photography is non commercial to awaken and educate ,,
And friends Like Clarence Gomes , Merck D'Silva Darryl Luke Loyola Fabian Namory and so many others added to the glow of life ,, Thank you All.
My childhood friend is a Dennis Fernandes in Suriname ,,a Holy Namite like me
By Firoze Shakir Photographer No1 - June 20, 2015

Email ThisBlogThis!Share to TwitterShare to FacebookShare to Pinterest
Labels: Why Do Muslim Parents Want Their Kids To Study In Convent Schools 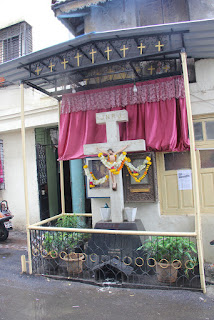 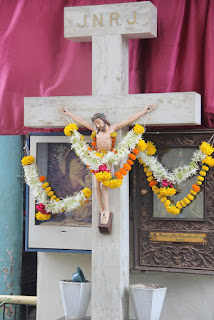 This is a cross that was very close to my old house Kamla Bai Sadan 21 De Monte Street Bandra , and those who passed this cross irrespective of their caste or creed specially the poor the Koli ladie would touch the Lords feet ,,with a single hope that he would bless them and add happiness to their lives ,
I have seen women old distressed talking to Jesus and invoking him , pleading with him to help them in their trials and tribulations ..and there is something about this particular Jesus it seems he listens patiently ..as a photographer I have tried to penetrate the depth of his eternal silence and it is this Jesus I have shot passionately ,,and mind you this is not about religiosity , it is about Faith.. and Faith is common to all of us ,,and Faith builds Trust ,,,Faith heals and comforts ,,
I also bought my granddaughter first Marziya when she was 2 to shoot this Jesus on the Cross and later Nerjis when she turned 2 .. shot Jesus and Nerjis shoots with a kindred attachment to my own vision ,,
Jesus at De Monte Street has seen so much ,, he has seen marriages , births holy communions adoration , he has wept in the rains ,, he has seen death ,, as the hearse passed him by...
And what did he tell the soul on its final journey ,,
My Father's house has many rooms; if that were not so, would I have told you that I am going there to prepare a place for you?
And than comforting the soul a bit further he added
Jesus said , "I am the resurrection and the life. The one who believes in me will live, even though they die;
By Firoze Shakir Photographer No1 - June 20, 2015

The Nargis Dutt Nagar Slums ,,If It Was Really A Vote Bank Why Did The Congress Lose 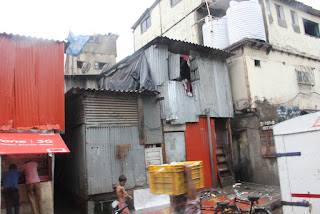 hope was hung on a noose
this time it was not the hand
that divided communities
that hand they did not choose
progress development acche
din sab ka sath sab ka vikas
was their only excuse ..what
the deuce ..the ugliest slum
dwelling with ms nargis dutt
writhing in her grave ..a thought
poetically infused tears on the
soul of a Mother India ..bloggers
will never be caught breaking news
By Firoze Shakir Photographer No1 - June 20, 2015

Email ThisBlogThis!Share to TwitterShare to FacebookShare to Pinterest
Labels: If It Was Really A Vote Bank Why Did The Congress Lose, The Nargis Dutt Nagar Slums 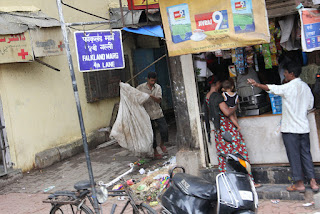 a road full of prostituted pain
women over made up in
cages bound in chains
waiting for a customer
as it rains ,society our
esteemed government
looks the other way
as women as commodity
with fatherless children
more pain ingrained
now it is only their
property that the
politician builder
nexus want to build
towers ..for profit
for gain.. fucked
soul of humanity
gone insane
By Firoze Shakir Photographer No1 - June 20, 2015

This Is For My Coolest Friend Alex,,, 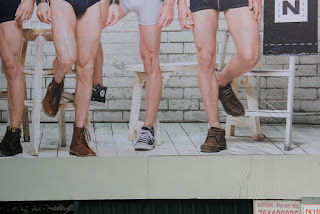 he shoots shapely legs
studiously of both the sex
he shoots them philosophically
it has nothing to with Oedipus
complex..legs covered in mini
micro shorts plaid and checks
now he shoots legs better than
plunging necks lonesome
girls minus their ex..avoiding legs
of girls with huge horn rimmed specs

Email ThisBlogThis!Share to TwitterShare to FacebookShare to Pinterest
Labels: This Is For My Coolest Friend Alex 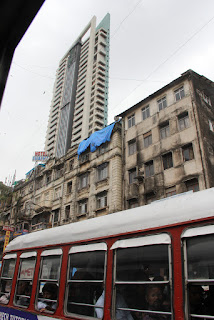 I shot these pictures while going to Nana Chowk and Grant Road for some work, than I took a bus to Bhendi Bazar that passes the infamously famous Mumbai Cages the redlight area of Mumbai called Peela House of Falkland Road ,, I shot a few frames of the commercial workers trying to sell their bodies earn their daily bread ..I have shot this area extensively , as I know a few transgender commercial workers here ,, this set at Flickr I have disabled from public view.

I am using the Windows Flickr uploader latest Flickr offering and I have no limit , being  a Pro Flickr member , I can upload all my images they will be kept private in sets till I enable them for public view .

It is a tedious process and the upload is going on since last night a picture at a time instead of a batch but ..it is a batch upload of a complete folder .

I will add the details descriptions later .. I like shooting old buildings in contrast with the phallic towers of the rich mans fantasy.. tall and erect ..

So far I have uploaded 180 images from this folder ,,and its raining , I have decided not to go for my walk.. my 60D is dead comatose ,,because I stupidly shot in the rains ,,

I have over 65535 images in my street photography set at Flickr but if you see my religious sets most of the stuff shot on the streets could as well be street photography so it could reach a figure of 200000 street shots ,, out of 340,216 Photos public and private at my Flickr photostream.

Flickr suits me well I showcase my vision here as a photo and as a blog.. I tried Google Photos too but I prefer Flickr , the best photo management site ,,a part of it is almost like Facebook as I have friends we interact , comment and share in depth views of life at both ends .. my world and their world.

However Ello is a place to watch, with big wide spread photos ..and some great photographers showcasing their creativity ,a nice well knit community of similar mindsets .. and creative interests ,,I use Blogspot  as it is one of my oldest online presence but I wish they shut it down ...I have several blogs here all sourced from Flickr ,, or give it a brand new format like Ello..

I use Tumblr simply because I am a hardcore Ms Marissa Mayer fan and Flickr allows cross blogging to Tumblr but as I see it Tumblr is an extension.. I dont have interacting friends like Flickr and Ello .

I also have two other sites I dont use at all Fotothing and Xanga.. lol.. I am not on Buzznet ..the place where I learnt blogging ,, and writing an online picture journal.. but my oldest friends from Buzznet 2004 are connected to me o Flickr ,,Benn Bell Tom Andrews Yorrik.. Marjie Friar Tuck and others .

And I am back on Facebook ,, I keep deactivating my account ,,from time to time to remain sane and able .

I like to post textless images but than sometimes I give in to soliloquy and start talking to myself.. what you read is my seminal sorrow overheard as an echo... lol