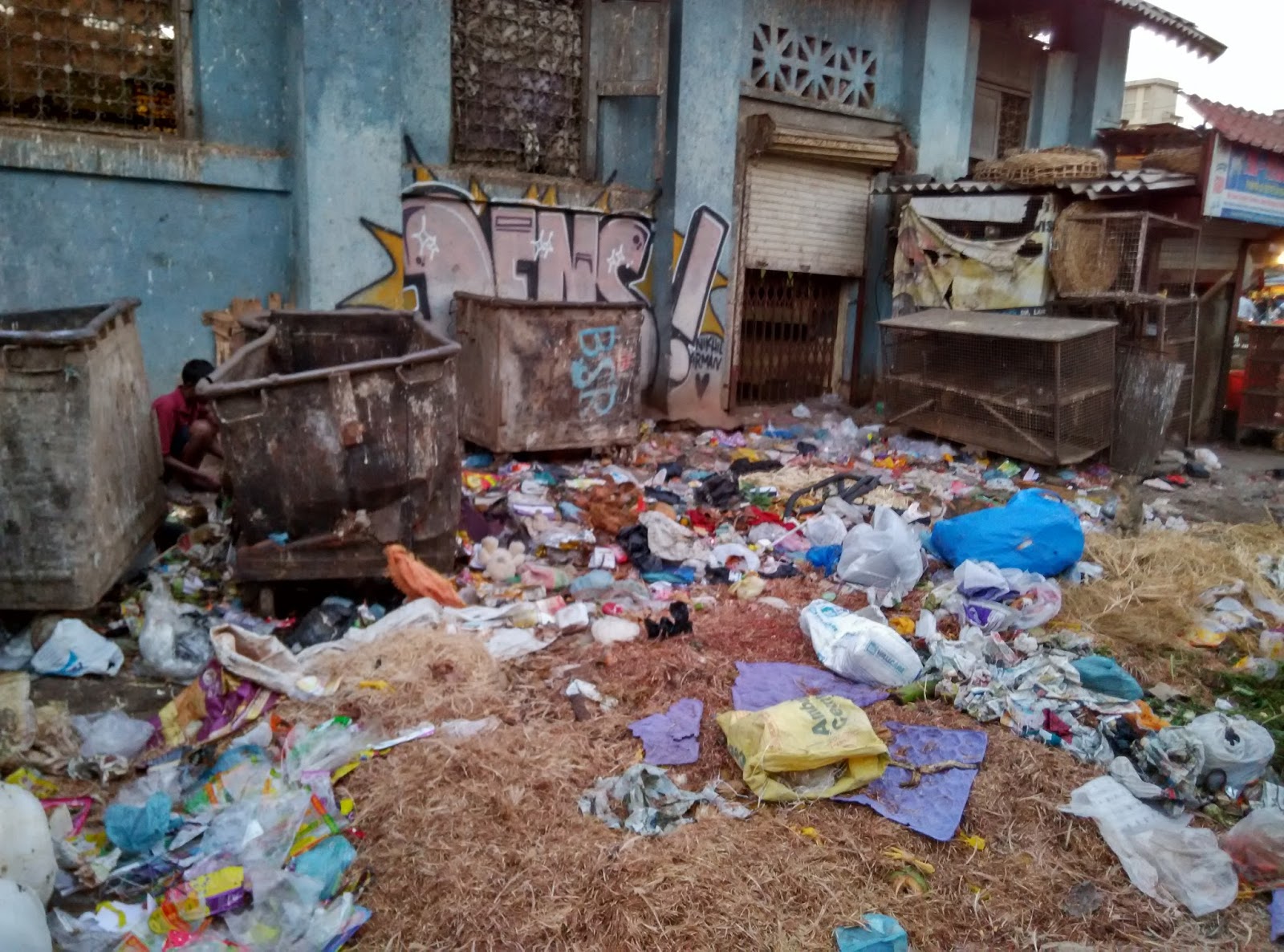 I was shooting videos on my new Xiaomi without pressing the recording button till a few kids showed me how to shoot ..I post pictures of Garbage but I want you to feel it to via my video..

This is Bandra Bazar Road and I doubt our local representatives want to improve this place ,..and this is the ugliest eyesore close to where I stay and close to where Advocate Ashish Shelar ji stays too.

My Second Visit To The Bonesetter 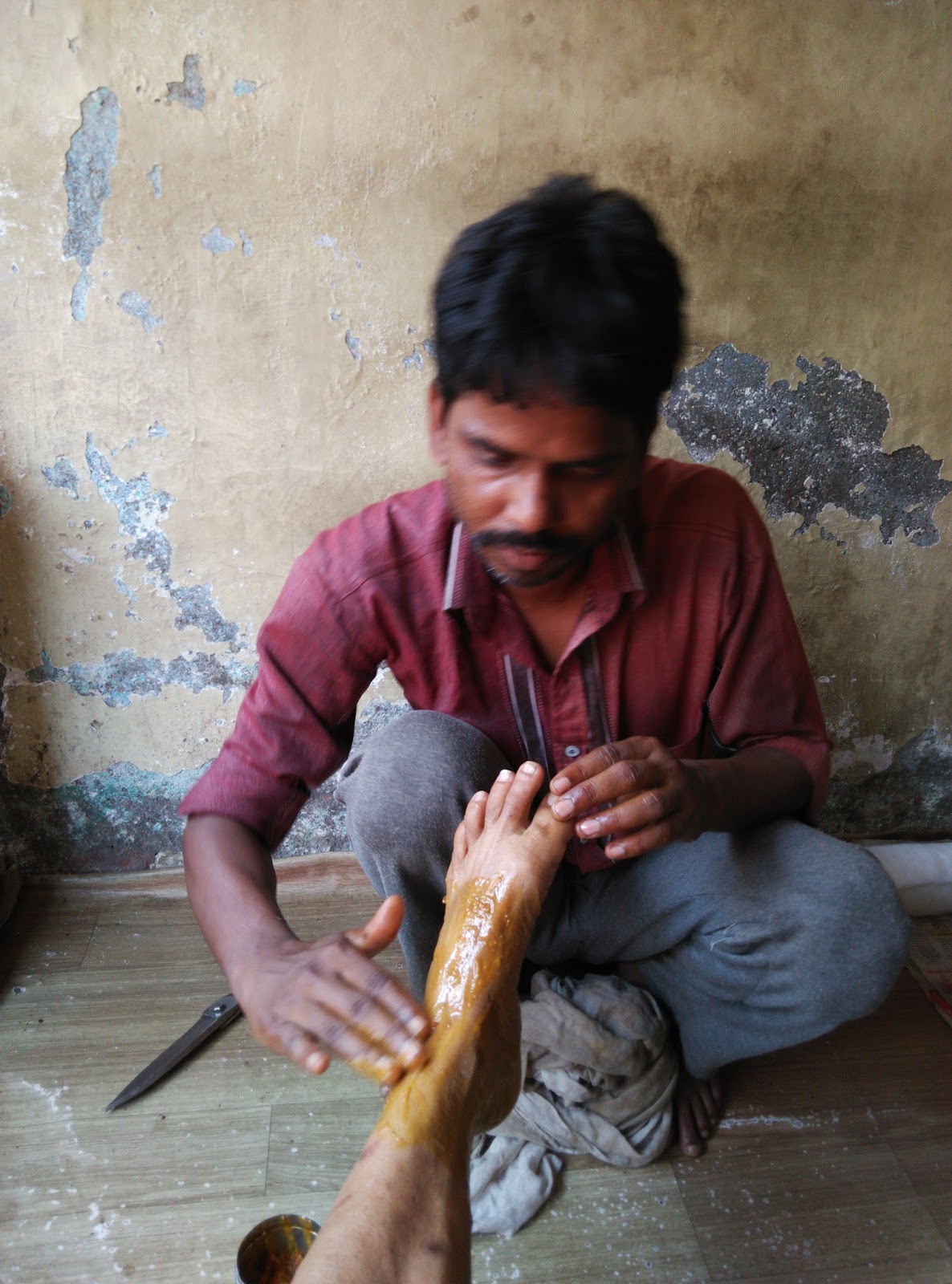 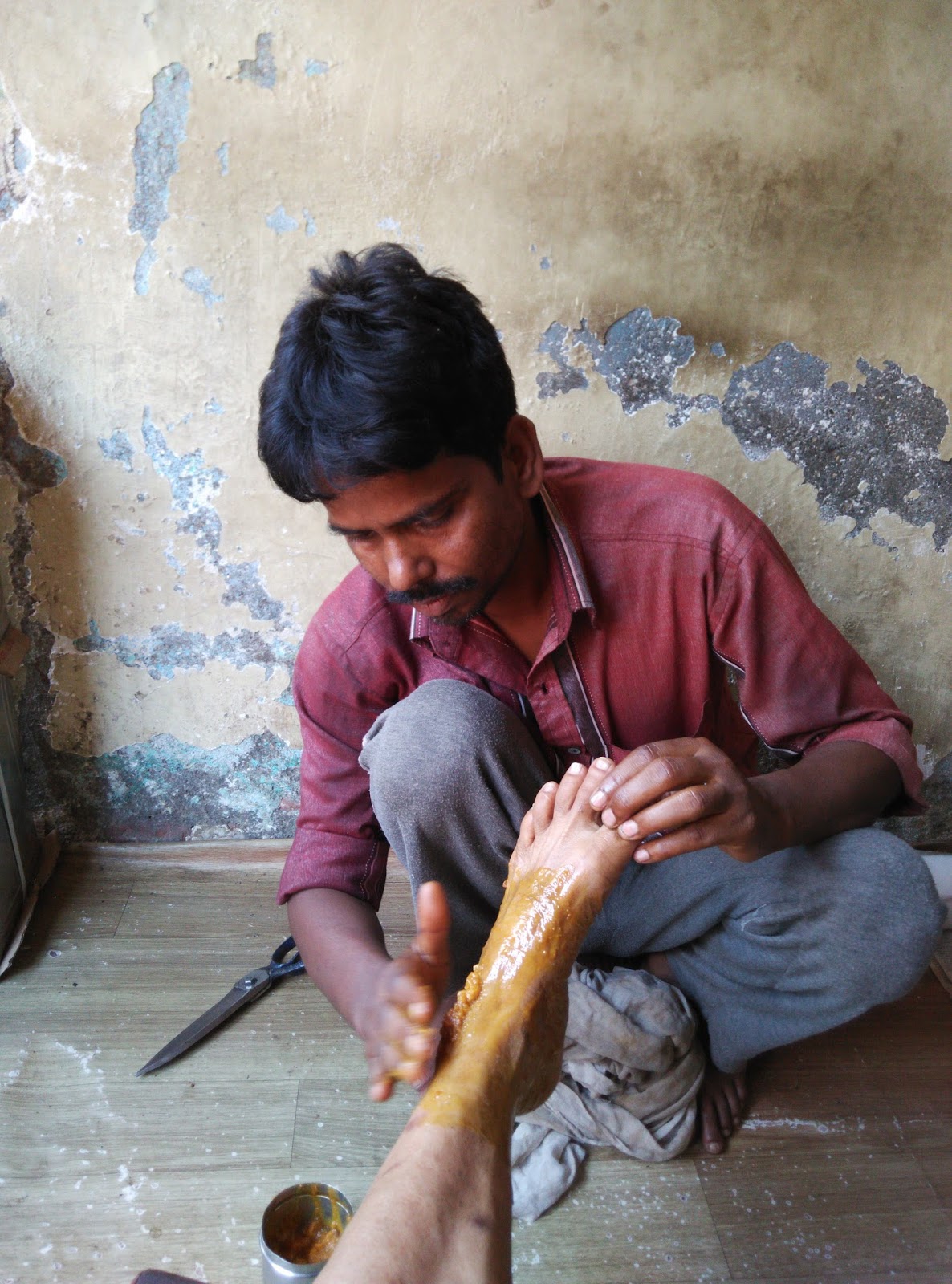 I kept my old bandage on and today went to get it dressed , the pain has not subsided and before I came here I had lots of work to finish.

My elder son gave me a new phone Xiaomi  the cheaper one and I did not know how to use it so in the bargain lost two videos I shot of the bonesetter ,,we live and learn.

And he is the assistant of the main guy Nizam , .. though Nizam is more experienced and had gone for Namaz so I took my chances trying my leg out with him.

Email ThisBlogThis!Share to TwitterShare to FacebookShare to Pinterest
Labels: My Second Visit To The Bonesetter

My Internet Textbook of Photography The Inimitable Hawk 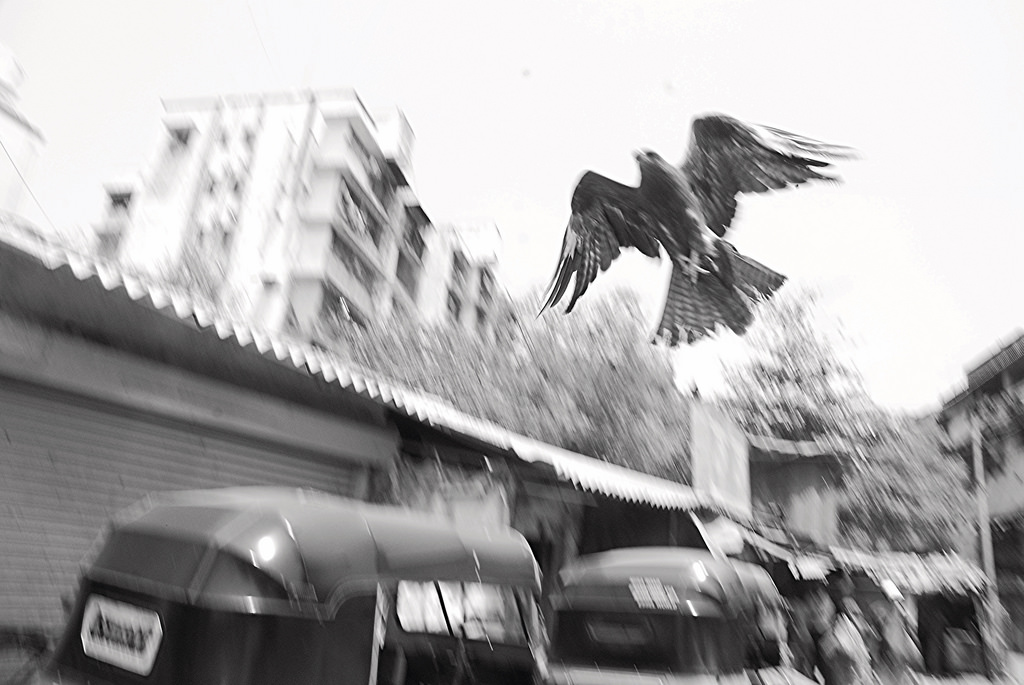 As I do not have a picture of Mr Thomas Hawk as I dont steal pictures from the web.. and as I will shoot Mr Hawk and his beautiful wife and kids when they come to visit Taj Mahal I am posting a picture metaphorically close to a Hawk..

his name is thomas hawk
his cosmic vision easily
cuts through rock ,,as
i stay in mumbai i envy
those who go on his photo
walks ,,his timeline vividly
intriguing is he shooting
round the clock..the nifty
Mrs TH his Muse her magic
with every frame he unlocks
he is humble lover of America
the beauty of his country
his picture stock..sharp
eyes of an American eagle
autonomously called Hawk
he is there be it ello flickr
twitter facebook google+
endearing you to a life
without bumps and knocks

he has helped me in my hardest times
i am a humble member of his flock ..
By Firoze Shakir Photographer No1 - April 01, 2015

God First Created A Face Than Added A Body To It 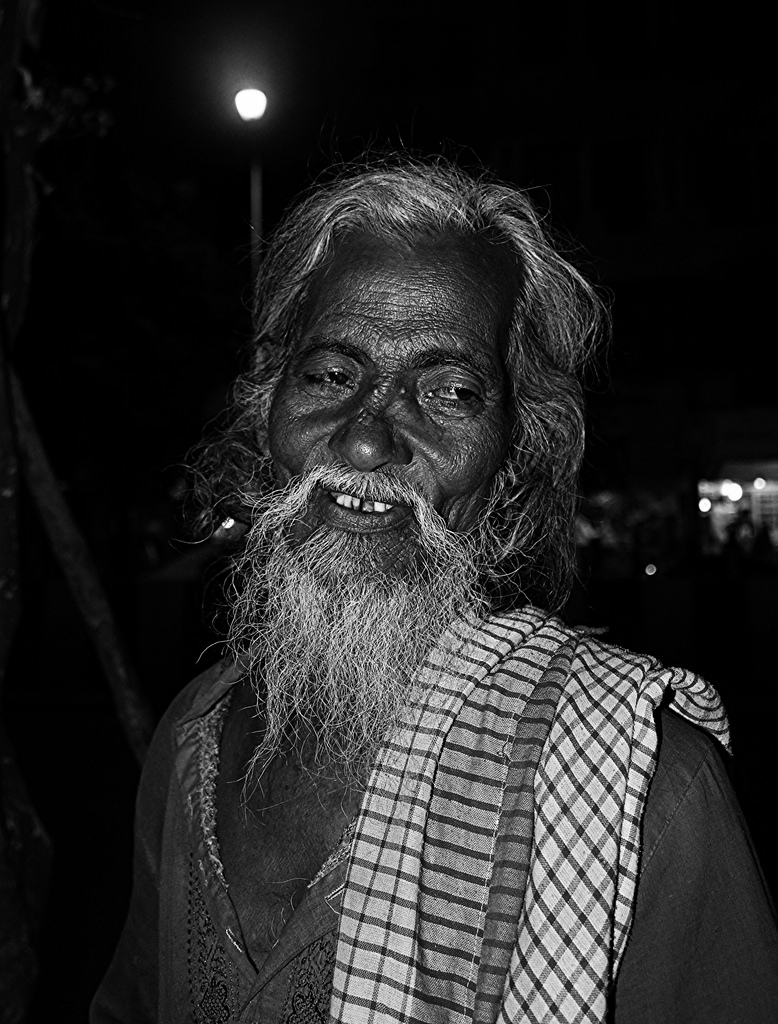 “I have seen a face with a thousand countenances, and a face that was but a single countenance as if held in a mould.

I have seen an old face much lined with nothing, and a smooth face in which all things were graven.

I know faces, because I look through the fabric my own eye weaves, and behold the reality beneath.”
― Kahlil Gibran, The Madman

Faces and faces and faces
is the eternal story of man
the story of human races
man the day he is born
his face he unwittingly
embraces .. dreams
from birth to death
he chases .his giant
leaps his tortoise like
paces ..his face holds
all the mysteries of a
world secrets hidden
in phrases ..molecular
particles spectral traces
some moments he recreates
others he erases .hardships
sorrows sufferings he faces

Shooting faces is a great pictorial pastime , some use special lens , some shoot in studios street artists shoot in ambient light and it is fascinating the number of  faces you see some you shoot some you might not be able to shoot ,, some people mostly conservative Muslims take offense ,,and here I must tell you I shot a lady living out her last days and she was informed by a relative about my photo study of her poetcizing her pain so the Great Church of Christ and its white cassock ed souls could condescend to see her and wash away her sins before her untimely death , instead the lady concerned asked me to remove her pictures I did it immediately ,,, respect for the wishes of the people you shoot is very important .. and I also removed an old mans pictures when his loudmouth American based grandson took objection his grandmother used to hawk ladies garments in the market ,,the old man died recently and both loved Marziya my granddaughter .

So shooting faces is a real tough one , for those who shoot from far and call it candid s it much too easy ..shoot and move away ,, I have shot a lot of faces in Ajmer during the Urus and among the Rafaees Malangs Mastans you find a wide array of faces .. the most intriguing faces are of the Moosa or Sada Suhagins ascetics Sufi followers who are spiritual cross dressers they are men , they maybe married too but they dress like women without being effeminate , they are robust masculine with mustache and beards .

The next faces are of beggars and here you have to be tactful, give them some money endear yourself to them and request permission to shoot them , if they agree you could get a great photo study.. I have a cosmic relationship with beggars as I have begged with a lot of them at Ajmer , I carry my beggars bowl too and sit at Dhai Djinn Ka Jhopda , I have begged with Rafaees and the Naga Sadhus too. My earnings I give to a bigger much poorer beggar than me .
I shoot a continuing story board of a few beggars some have however disappeared but I shoot in Bandra Khwajah Bhai Jaffar Bhai both senior beggars at Bandra Bazar Road .

And I am shooting two new beggars with highly dramatic faces I feed them too.. but the most tragic is the child beggar I shot in Ajmer with no arms and accusing eyes , he was never happy to be friendly with me.

Appu the beggar from Assam with no hands or legs merely a torso has disappeared too.. I search for him both at Mahim Minara Masjid and Chor Bazar .

The next lot of faces mystically supreme and forcefully spiritual are the Naga Sadhus and I shot a lot during my stay at Maha Kumbh.. once you are known to them you can shoot them smoking ganja or doing puja or yoga ,, the foreigner Naga Sadhus dont take too kindly to Indian photographers I think.

The last but not the least is Hijra portraiture I must be humble but I have shot the largest number of Hijra transgender faces , old hags , beggar hijras , beautiful hijra divas , hijra children..I was lucky and most of the Hijras knew me , including the prostitute hijras and beggar hijras in trains .

Some hijras can be spiteful abusive but it did not matter if I wanted to shoot them..and I still shoot them though my pictures are not on public domain, I shot hijras taking a bath at the Sangam and I shoot a lot ,, I shot hijras piercing a rod 18 feet long during the Marriammen feast I shot Hijras being initiated at Hijra Gully No 1 .

So shooting faces is an amazing art and all you need is a bit of kindness and humility of your camera .. and if you give some money to the beggar you shoot he will bless you , I have yet to see a photographer carrying a model release form while shooting beggars so he can have his pictures chosen by Getty Images ,,for sale LOL ..

And I did not intend too write this much text but an earthen post filled with water has to be shared with everyone ,,and faces is something that intrigue us all beautiful faces , ugly faces faces with pock marks faces burnt with acid faces with sockets for eyes , leprous faces , faces that have masks over faces , and maybe our face is actually a mask over the sum total of our being ..

Faces ..of Human Races
scratch it another thought surfaces 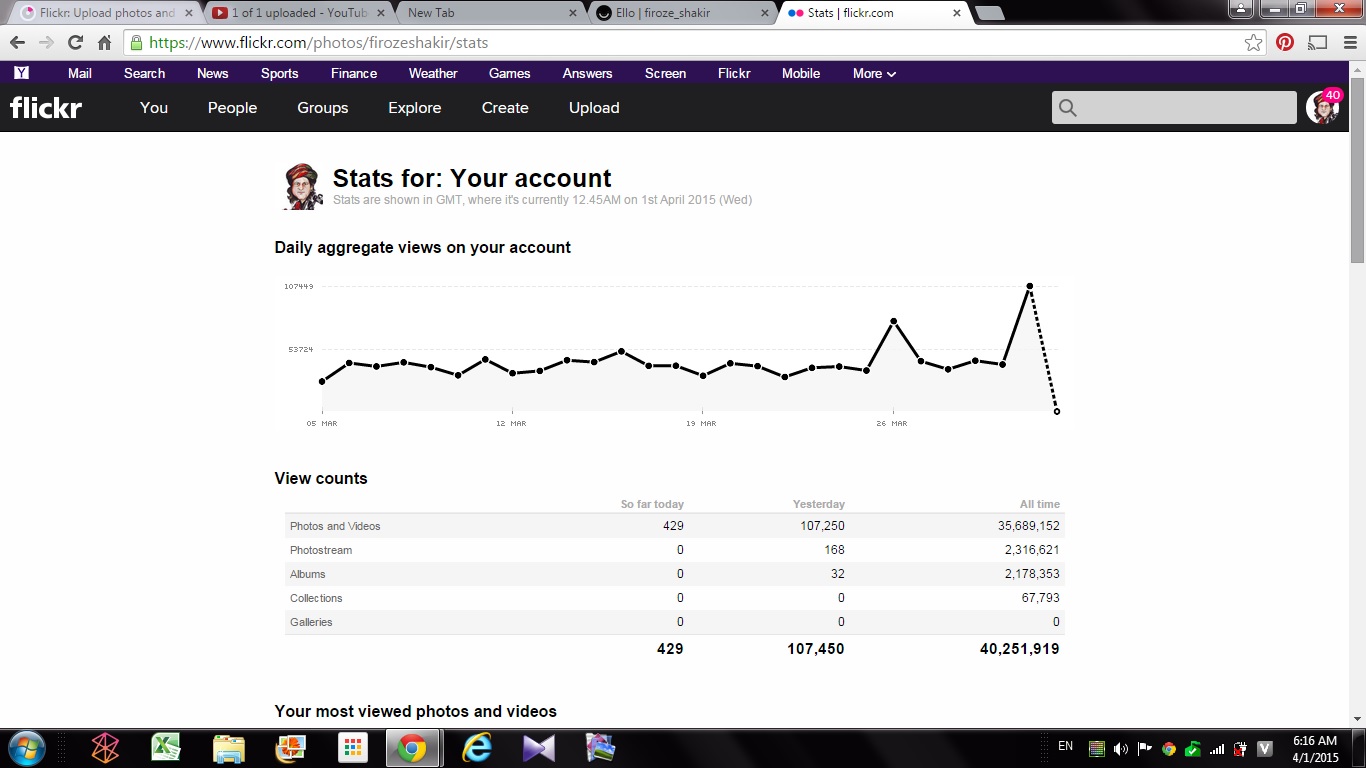 And I know a few people might consider this screenshot as showing off , but as a point and shoot DSLR User it s an encouragement to others that Original Content whether shot on the DSLR or the mobile phone will be viewed and you dont have to be envious at not having the best of camera or lenses .
And original content is what most bloggers avoid , they love to use images from the web sometimes even stealing from Flickr members I could never post a picture from the web  if I can shoot it ,  that is why I simply shoot my surroundings , images on my mobile phone when I set out on my morning walks ,,

And there is no method no deliberate composition I have hardly had training in formal photography , my textbook of photography has been all of you I follow on Flickr ,, I may not  like airplanes , artistic nudes , nude cyclists , flowers , mountains but once you added me I followed you , I will not add you if you are not a photographer and an empty timeline at Flickr .

I have one great regret and that is Flickr may have come out with some great tools but when our pictures are stolen by Flickr members the lethargic laid-back approach by Yahoo Copyright is horrendous ... too much paperwork and Flickr should have its own safeguards than the Spaceball tool even a wiz kid can  hack.

Most of my hijra pictures even today are on Flickr members timeline and I simply shut my Hijra documentary and my Crossdresser  documentary from public view completely ..
I dont and will never use ugly Water Marks on the face of my pictures NEVER ,,People know what I shoot and how I shoot If I scroll a Flickr timeline I can tell you within seconds the name of the photographer .. I know a picture of Akbar Simonese .I kow my friend Randalls pictures  .I know a Benn Bell I know a Posey even when he hides his face behind a James Joyce book.. And I know a Thomas Hawk.. I could spot  it from a mile and no man shoots his wife as beautifully as Mr Hawk.. This is one couple God chose the match in Heaven.

I can spot David Seibolds pictures and we have met recently via Ello.. and there is Alex W and he is still hunting for beggars and earcleaners in LA .

And Meld who adds comments as ornaments to my pictures and Angel and her love for angels and cemeteries ..or Tender with his William Blake symbolism his wavelengths and his surreal images .. So when you see pictures of your 2000 friends on Flickr and say you are not influenced ,I dont believe you , I have unusual creativity Ramcur Rose Rosiehardy Eric Parker ,and so many others I could go on dropping names ,, you have all influenced me to shoot Original Content .. and I thank you all.

My hijra documentary is the most exotic I can say it with humility nobody has shot the Hijra with as much compassion than me ,, and this documentary will go with me to my grave.

And I pimp my Flickr timeline via Twitter 1.55 lac tweets , via Tumblr , Blogspot , Ello , Indiblogger and Google+ and it is not photography but as blogs .. photoblogs .

I could never use Flickr as merely a photography showcasing site , pictures must talk and connect and they do need description sometimes ,I am also grateful to those Flickr photographers who came to savor my family's hospitality in the bargain taught my grandchildren a trick or two to shoot I dont want them to end up as point and shoot DSLR users they should learn the art and technique of reading the light from within.. and the kids love it when someone enters our home to shed Light ,, without Light there can be no photography ..

And so a big thanks to all my Flickr friends ,,I am still limping , my leg is bandaged , my walking days at MET Cricket Grounds have ended disastrously ,, and with this limp I took Nerjis to Bandra Talao to shoot pictures last evening.

And I miss my friend Boaz ..and the staff at the Lucky Hotel miss him too.. LOL .