About Childrens Matam And Shiasm In India 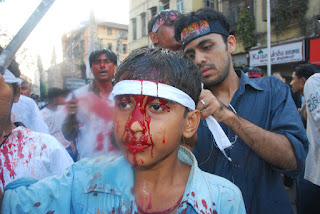 Also let it be known all my paternal forefathers were Sunnis , my dad said originated from a race called Moghul Pathans , my fathers father gave up Sunnism to become a Shia and my life could never have been better ,,so my respect for the Sunni faith has never diminished ..mutual respect tolerance and I believe in Sunni Shia amity .. living as Indians it is more important than just living as sectarian divided Muslims ..
And this is not a picture just ignore it , this a personal blog I could have put my own picture with my bleeding head but that would be my misplaced Ego.. I am a product of my Mothers Womb.. It gave birth to Shias ,, Hamdullah.


As a Shia I may not have your bigoted spiritual vision even if you are a Muslim .. My Shiasm is a product of My Indianness My Karbala is my Dharam Bhumi.. my Karbala is everywhere and my Ashura is Every Day ,,,


Even if I do get a ticket to go to Iraq Karbala I will give it to a poor person.. who will perhaps never get a chance to see Karbala .. For me Karbala is an emotion that will live after I am dead and gone

Email ThisBlogThis!Share to TwitterShare to FacebookShare to Pinterest
Labels: About Childrens Matam And Shiasm In India 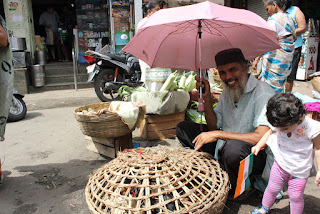 Marziya shot Bandra Bazar Road , our pathetic surroundings and the beggars and koli fisherwomen.. while Nerjis watched all this ,, Nerjis on her part began shooting at the age of 18 month.

The story of this picture is about the Desi chicken seller , .. he performed Haj with his wife last year 2014 ,, Haj totally changed him and I began calling him Haji Sab, he liked that very much, I hardly call anyone by name so calling him Haji Sab in the market made him very happy ,, and than he took me aside and said .. Firoze Bhai I hope you get a chance to perform Haj ,,I would love calling you Haji Sab too.. this is the simplicity of simple people  and it is this simplicity that I shoot and showcase .

I met him yesterday and told him I was going to shoot his video I had just finished my 8 km walk at MET Grounds Reclamation..I sat on the floor next to him and began my shoot .

He has been selling desi chicken since the age of 15 at this very Bandra Bazar market.. on the road .his father sold chickens too.. and they were the only Desi chicken sellers as the rest of the market sold broilers .

As my granddaughter have shot him , he loves them both .. and he has 4 sons and two daughters all married save a son.. all happily settled through his earnings as a chicken seller ..it is these common people in my area, poor Muslims hardworking Muslims I shoot , Muslims who dont begrudge another mans wealth , Muslims who are happy with their lot even if the roof falls on their head ..for good or bad they say Allah Malik Hai ,, which means God is the Great Master .. or All Ki Den which means Gift of God ,, even when they have 6 children they say it is Gods Gift.. though personally I wish their spiritual satraps would advise them to have fewer children and give the few a better quality of life.

Well  it is his personal life , and my thoughts are merely a corollary to changing times for all of us including Muslims .

Here in Bandra what touches me the most is Religion does not bifurcate us or separates us ,he is a Sunni I am a  Shia but it hardly matters , we dont discuss our sect.. never.

Almost the majority of my contacts wellwishers shop keepers butchers are Sunni and we get along beautifully ,, no ill will only goodwill.

The Banana seller down the road near MET who gave his hard earned savings to a friend to keep , left without informing him to his native place , giving the excuse that there was an emergency... but the banana seller who was eagerly waiting to go to his native place his daughters impending wedding had to postpone his trip and all he said to me Allah Malik Hai..

And than my mothers words came back to me like a bolt from the blue ,,

God is the one who gives us our Respect and our Self Esteem. we on our part have to continue with our Good deeds even if Bad things keep coming in our way..

A young guy sent me a message on Flickr ,,

You are such a great photographer! Glad to see your gallery, the collection is very unique.
God bless u, keep on clicking!

I thanked him and told him I was a simple photographer ..and the pride of ones camera gets you nowhere ,, if the camera does not teach you Humility than one must give up Photography for good .

This is my first blog of the day as I will leave now for my  8 km walk.. with a brand new keds gifted to me and my wife by our only daughter in Delhi.