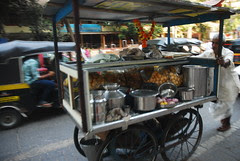 Because he did not want to feed Madams elephants he stayed back in Mumbai, a photo by firoze shakir photographerno1 on Flickr.

When you choose to block someone, it means they:

Note: While the block itself will occur immediately, removal of comments and favorites can take up to several hours (though hopefully not that long!).

Please confirm that you're sure you want to block ?????

Or return to the list of contacts you are blocking.

I have removed the name of the person I blocked not wanting to hurt his sentiments.

But it beats me they will never read my disclaimer on my Profile page which states the following.

Unauthorized use or reproduction of my pictures or text for any reason is prohibited ...

DO NOT ADD ME AS A CONTACT if you have tasteless masturbationally self-indulgent crap on your page!..find someone of your own kind dont subject me to blocking you - which I will if I see my thumbnail on your contacts page.


PLEASE DONT SEND ME INVITATIONS FOR GROUPS..I DONT BELONG TO GROUPS HERE OR AT FACEBOOK OR ELSEWHERE

I WILL BLOCK ONE SIDED CONTACTS THAT HAVE ADDED ME WITHOUT THEIR PROFILE OR AVATAR OR THOSE INTO KINKY GROUPS..PORN ETC..

The greatest problem of One Sided Contacts at Flickr they dont disappear if you delete them, your thumbnail will show on their photo steam , thereby
adding embarrassment to curiosity.

Because Flickr is trying to be the poor mans Facebook with respect to pictures they condone this , madness that is one big pain in the rectum of remorse.

And it hits me hard I type with a single finger due to permanent right hand , imagine my agony..if there was merely one step in blocking it would not matter at all.


But the number of steps drives me crazy to say the least.

What bugs me is how can Flickr a fabulous site allow people to become members without valid identification or profiles.


And I hope with all the changes on the new Flickr page in the future this aspect s taken as my feedback.

I am still protesting against the enabling of Comment Moderation , so I have strangled my comment box for good.

Mind you I miss comments from my old friends at Flickr but than those who shit hate comments on my controversial religion and street pictures are in a large majority.

And because I want you to sincerely read this I have taken the help of Raveena Hijda the Rare Beauty and Seductress and the Hijra Goddess of Ajmer. 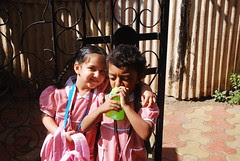 Marziya Is a Born Photographer She Knows The Needs of the Camera, a photo by firoze shakir photographerno1 on Flickr.

Marziya Shakir celebrated her birthday on 24 Nov , her mother never shoots pictures, not on my camera , but this time she asked me for it , I would be at work and I did not want to impose myself on this kiddy party.

My daughter in law called me at work , and was not understanding something ,about the Nikon D 80 .. when I returned home she told me she could not find the flash button , so Marziya took it from her hands and showed it to her ..

Marziya has been using my camera since two years she knows it perfectly well , she only knows to shoot pictures and she shoots what she sees she shoots it well, but nowadays she shows off making stylish poses while shooting , she considers herself No1 .

She is all excited because her god uncle Guru Dr Glenn Losack MD is coming to Mumbai..she has been pampered enough by the Danish couple Kim and Viola who are now become family too. 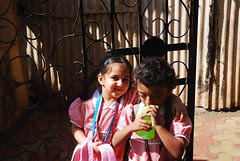 My world is real it lives breathes maybe it is a pond but it has live fishes , human swirling around I shoot my surroundings my people I shoot original stuff I post original stuff I would be dead posting funny pictures and kinky stuff I am a positive spammer but I spam to educate I have nothing to sell but yes I give hope free .. without evangelizing my religion or my faith .. 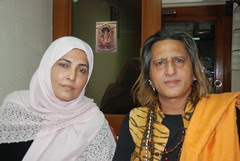 
It was an arranged marriage , she was in her teens I was 25 year old , my marriage was solemnized by Maulana Kalbe Abid Saab in Lucknow Nakhas.

I had toddled her once when she was a little child is all I know as a memory..

God Save You From The Muslim Bigot 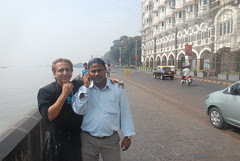 God Save You From The Muslim Bigot, a photo by firoze shakir photographerno1 on Flickr.


I have never told you a secret , but I will today, I am criticized by certain section of Muslim bigots and a few members of the Shia community too, for shooting Hinduism , and today I break my silence , I shoot my Hindu stuff for this young guy in the picture I wrote about him but not in detail , his name is Yogesh he is a Maharashtrian Hindu, I met him once during Ashura in Mumbai he is a very close friend of Habib Nasser and Baqar Nasser , while the scourging s were going on he grabbed the zanjeer from my hands tears in his eyes he began scourging too, and from that day I decided for his community I will shoot all the Hindu feasts..in Mumbai at least.

And I am happy he practices his Faith as a Hindu , but he feels pain of my Imam was enough for me , the Shia bigot will tell me Pura Kyon Nahi Banta ..Pure Kitna Shia Bante Hain Woh Bhi Mujhe Pata Hai...Yes I shoot Lal Bagh Cha Raja for his parents his children his relatives , I shoot Govinda I shoot Durga Visarjan and I shoot it because he bled himself for my Imam..This is enough for me I shoot all his feasts barefeet and I shall continue doing it till I am alive..

I was waiting for a person at Gateway of India when he spotted me and asked me if I remembered him.. he is calling Baqar Nasser to tell him that he has spotted me here.. 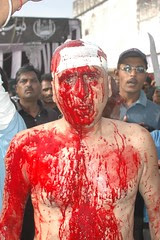 Hamare Mullah, a photo by firoze shakir photographerno1 on Flickr.

Ammam means clerical turban.
This should only hurt whom the amama fits.. these lines are for rogue mullahs who are hell bent on dividing us.. our country as a Nation for political gains.. vote politics.Amama includes all religious head gears..that shame the headless sacrifice for Islam s Truth and Justice on the burning sands of Karbala..
There is also a segment of Shia Wahabbi clerics that are trying all means to erase Azadari e Hussain completely this information I got from a Nawab in Lucknow.

Dam Madar Malang and the Siddis of Junagadh 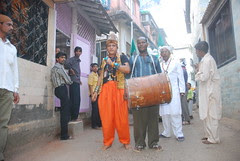 Dam Madar Malang and the Siddis of Junagadh, a photo by firoze shakir photographerno1 on Flickr.
By Firoze Shakir Photographer No1 - November 26, 2011

Two Malangs of Bandra, a photo by firoze shakir photographerno1 on Flickr.
By Firoze Shakir Photographer No1 - November 26, 2011