I Shot Pictures To Poeticize The Soul Of Memories 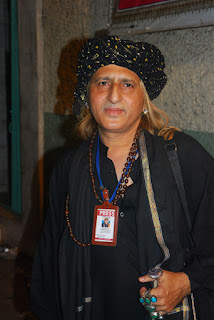 fleeting moments I tried to freeze as they touched me holistically now they have come back to life
through my poetry ,,,what I saw
on the viewfinder you too can see
By Firoze Shakir Photographer No1 - October 10, 2015 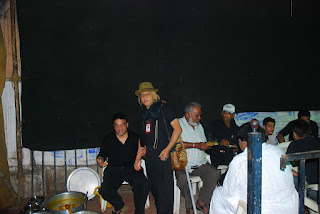 Before entering Imamwada from the JJ end you had to pass this iconic sabil and invariably you would find Ali Shah bhai with his friends brothers preparing Niyaz and when he saw me , he would ask me to come in , and thus we chatted , he was a true Maulaiee , and he respected others who were lovers of Imam Ali like him , he mostly hung around with Jalal Mamu and all the Shia kids wanted to do matam like them.. both were devout passionate about Ghame Hussain,.

I had not met Ali Shah Bhai for a very long time but I  knew he was not well and he suffered his fate in silence ,, I can never forget him I spent some great times with him at Jaorah Hussain Tekri.. and this is another memory within the memory of Moharam in Mumbai 2009.

Ali Shah Bhai.. Is Now A Memory Within A Memory 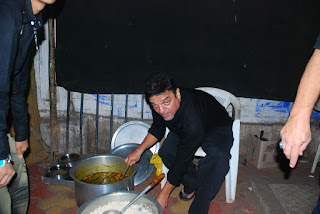 This was shot in 2009 Moharam in Mumbai  and I met Ali Shah Bhai this was his Sabil close to JJ Hospital and his family house , he offered me niyaz , his hospitality was sincere from the heart and he liked me though he was low profile never liked to be photographed but I was lucky I shot his pictures and these are memories woven within memories of Moharam..and I shot sets and storyboards ..I wanted my pictures to be seen as such , and this morning I had to go to town to help a dear friend buy a camera , he needed my advice so I took him to Reliable stores and after he had bought the camera I spent sometime at my camera club PSI.
From there I headed to Imamwada to pay my respect to late Ali Shah bhais brothers and family , but I met another friend Guddu near Moghul Masjid and he said the entire family is at Yari Road at Ali Shah Bhais house ,,
And there is his Teeja Majlis  tomorrow 11 October at Moghul Masjid ,, at 3 pm I think.. one needs to confirm before going .

So I returned home disappointed..and started searching for Ali Shah Bhais pictures in my Flickr archives till I found this old memory...within my own memory .
By Firoze Shakir Photographer No1 - October 10, 2015 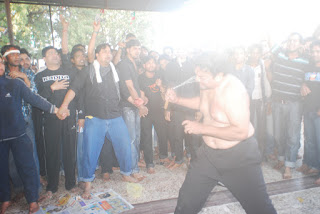 I shot this in 2011 at Hussain Tekri Jaorah and I am indebted to a friend who took me along with him as I was totally broke I had gone through a very bad phase in Life .. I still am trying to come out of it , I made some professional errors and I had to pay dearly ,,
And this was Chehlum the 40 the day of the Martyrdom of Hazrat Imam Hussain commemorated passionately at Hussain Tekri .. most of the Shias from Mumbai throng this place as they get an evening to catch up with the intense Chehlum in Mumbai too.
It was pretty tough to get accommodation here and I met Ali Shah bhai , his brothers have a lodge here , he asked me to come and stay with him he has a home at Jaorah , I politely refused as I was with friends who had bought me here..and Ali Shah Bhai and I got along very well as Jalal Mamu knew my dad Mohomed Shakir Sab from Colaba Strand Cinema .. and my father was well known among the Shia migrants from Lucknow settled in Mumbai.
I am a traditionalist photographer and I used to detest videos ,I wish I knew how to shoot videos at that time .. when Ali Shah Bhai entered the Roza to do his zanjir matam, there was pin drop silence and fear , doctors had warned him that his entire back is held up by stitches ..but Ali Bhai took the blades and on the first stroke the crowd let out a shriek Ya Ali the second Stroke Ya Zehra and Ali Shahbhais back was cut open as blood flowed as tears are flowing from my eyes ,,some of his close friends his brother Ali rushed in to snatch his blades and Ali Shah let out a scream of a trapped animal ,now more people about 30 tried to hold him tell him to stop him but to no avail all he said for the Sake of Bibi dont stop me .. silently the crowd reluctantly moved back and tears blood sweat and the aroma of rose water now there was no stopping him he was faster than my camera and I just moved away I rushed to another end where Kashmiris were doing the Kama Matam I snatched a kama from a Kashmiris hand and began clubbing my head with the sharp end of the dagger ,, the crowds pulled the dagger from my hand .
Wa Waila Sad Waila Ibne Zehra Wa Waila
Yes Moharam in Mumbai will miss the cries of Ali Shah Bhai the crowds in Mumbai at JJ close to his house will remember his matam outside his sabil on Ashura ..I shot here to with my Danish friend Kim and it is impossibl to shoot Ali Bhai the crowds keep pushing you ,, after Ali Shah Bhai finished his zanjir Matam , I had no words and Kim was zapped .. I went further ahead I handed my camera to Viola Kims partner and I took a dagger and began cutting my head such is the impact of watching Alisha Bhai.
I have not shot Moharam in Mumbai since 2013 I moved away shooting Ashura Chehlum in Hyderabad Lucknow and Delhi.. I missed Moharam in Mumbai but I preferred the Azadari in Hyderabad without problems no politicizing no overtones of hate ,, and Lucknow being the city of my birth .. I was at home with the passion of the Shias of Lucknow for Azadari and Hussain.
I have shot both Ashura and Chehlum in Delhi too ,,
But all in all it wont ever be easy to ever forget Ali Shah Bhai,.
He died on a Friday and was buried on the day the Shias celebrate Eid e Mubhaila .
RIP dear friend mentor guide ,,,and now I wonder how Jalal Mamu is taking his best friends death.
I pay condolence to Ali Shah bhai family his children his brothers relatives .with head bowed I salute them ..
Now for those who wonder why I shot pictures ,, no I dont sell pictures but yes my pictures sometimes are obituaries of friends who touched and passed me by leaving a pain a void in my heart..
And I await my own journey barefeet minus the camera .. leaving everything behind .. save memories.
By Firoze Shakir Photographer No1 - October 10, 2015

Email ThisBlogThis!Share to TwitterShare to FacebookShare to Pinterest
Labels: Ali Shah The Lion Of Mumbai, Remembered 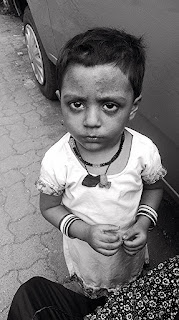 Perhaps she remembers my camera that shot her in her mothers lap sleeping in the hot sun , begging on Fridays on this side lane at Bandra Bazar Road that leads to the Sunni Mosque at Bandra Reclamation and on the further end to the Bandra Shia Khoja Mosque ,,and she hopes they will giver her alms ,, she still from moring till late noon , than she move towards the Bandra Shia Khoja mosque ,,more rich Muslims here goes without saying.. the business class of Mumbai.

I have recently started shooting videos of Muslim beggars let them tell their story instead of my words ,, that may be poetically exaggerated .. metaphysical or simply hyperbolic..


I was in a hurry but shot another young beggar mother and childs video.. all my videos are on You Tube ,,
By Firoze Shakir Photographer No1 - October 10, 2015