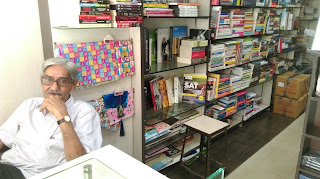 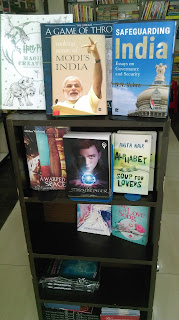 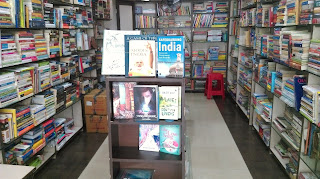 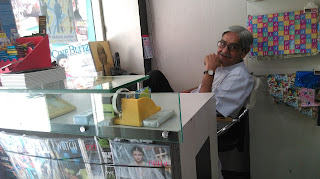 I have known Rajan the owner of Happy Book Stall since the time I stayed at Bandra at De Monte Street ..to come to Hill Road I had to come via Chinchpokli Road that is right opposite his bookshop .
Most of us Bandraites book readers lovers spent hours at his shop and he never objected ..I bought my books from him and we have known each other since the 80 s .His shop is over 70 years old he has been handling it for over 40 years ..the picture of his father watches over this iconic shop full of memories .
But Rajan is disappointed the future on books is very bleak even Danai at Khar closed down ...this place is prime property Bandra Hill Road ..I too once had my workplace down this road the rentals here are very high and while I was chatting with him not a single footfall
He is giving discounts on certain genre of books is a very good conversationalist humble polite and it saddened me to hear him speak out his pain .
His son helps him out in the afternoon ...and whenever I pass this way I make it a point to wish him and talk to him .
He was surprised when I took his picture but I assured him people would love to see him and remember their days at his shop ..I told him I would be posting his pictures at Facebook ..
The words came later ...and even if you people have stopped reading books at least inculcate the love of books to your children your grandchildren ..books are expensive but the crispy touch of the pages and the feel of the book besides the content can add a dimension to the personality of your ward .
We are alive with the memories of the books we read ..they really made us what we are today ....the books I read Dickens Balzac Dostoevsky instilled a desire in me shooting pictures on the steets ..I shoot Dickensian characters in Mumbai I search for Mr Micawber and among the crotchety Muslim Beggars I eventually find Mr Uriah Heep ..I meet the East Indian lady unmarried waiting for her Prince Charming and I am reminded of Aunt Peggoty . And the overweight sweeper boy at Bandra bazaar reminds me of the Fat Boy from Pickwick Papers .I shoot storyboards of Balzacs Humaine Comedy on the streets I shoot the Prince I shoot the Idiot ..
This is my tribute to Rajan my dear friend caught in a time wrap at Happy Book Stall Bandra Hill Road .
By Firoze Shakir Photographer No1 - March 29, 2016

The Magic of Bandra Bazar Road . 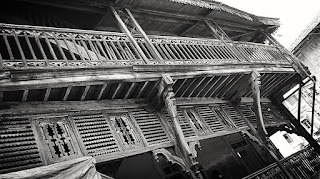 Before I came to Bazar Road I stayed in a company flat first at 28 Road Bandra but I came with my wife to shop in the Bazar ..I had Alsatians those days so I got beef from Intezar Bhai and I spent a fortune on my dogs ..I later gave away my dogs to Appa Sab brother of Mr Bhai Thakur of Virar .
From 29 Road I lived for a short while at Aradhana Linking Road Khar this too was a company flat ..
Thanks we finally bought a house in the fishing village of Danpada I began working for Prachins Of Producer Mr Nitin Manmohan ..but our house was doomed when the riots errupted in 93 we lost everything we were nomads we lived in safe houses at Chand Society Juhu thanks to my boss Nitinji from here to 11 Road Juhu next to Dannyji than to Link Road Vishaka Apts opp Lotus petrol pump ..the kids were all studying in Bandra the overhead s of their transport was high so we took a rented place at Ranwar and from Ranwar to Pali Naka and finally we came to live in our own house at De Monte Street and we became part of Bandra Bazar Road for many years
We again left this place took a house on rent next to Mehboob and came back to Bandra Bazar and reclamation cusp our present house and the Bazar is next door and I document shoot the garbage beggars wall art all in this unique peaceful locality where all communities live in peace and mutual coexistence .
I can go on shooting the Bazar I keep rediscovering it in the next frame that I will shoot and with Jesus at every corner what more could I ask for .. the caterers the fish market buffalo meat Market.
The East Indians .. their lost illusions their surviving ethos their pain I shoot the Bohra s ...all in a set at Flickr called Bandra Bazar Road .
By Firoze Shakir Photographer No1 - March 29, 2016

The Church And Me 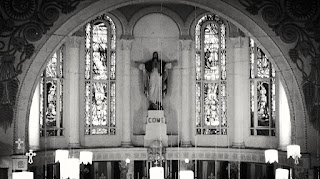 I started my schooling at Private European School near Usha Sadan and this was part of John The Baptist Methodist Church ..the Church was not as ornate as the Roman Catholic Church I was to get influenced later in life ..
The teachers who taught me were all English but never was there any reference to my being a Muslim in short there was no proselytizing ...here too I took up Bible studies for the few years I was part of this school .
Sunday's our Goan maid would dress us up and take us to St Francis Chapel opposite Miramar close to Hampton Court and my mother never objected to this at all..religion was not a hurdle at our house ....and a Shia house our Arabic teacher was a Sunni from the mosque at Colaba Bazar ..as far as I remember there were hardly any Shias at Wodehouse Road ..for our Shia feasts we had to go to Imamia at Bhendi Bazar .
After I left Private European School and joined Holy Name in 1963 it was my first Roman Catholic influence and it reached deep down into my psyche my friends my teachers were Christians and Paul my friend was an altar boy so was his father brother I got my first taste of wine too thanks to them .
My private thinking moments were spent at Holy Name Cathedral but at Jony Castle where we lived I was being bombarded brainwashed by reading Watch tower and the Bible of the Jheovahs Witness thanks to my childhood friend Keith Kangas grandma she hated all religion be it Hindu Catholics Buddhist or Parsi .
Rivers of milk and honey that is what she put in our heads ..and later while living at Keith's house during my SSC exam my parents were going through a lot of domestic problems mom ear sent to Lucknow with my other siblings Dad and one brother stayed at Mereweather Road on rent I lived with Keith Kanga it was here that I was conned taken to the sea off Badhwar Park to be baptized as a Jheovahs Witness but thanks to Allah it rained heavily and the baptism was kept for another day ...but my father took me away from Keith's house we got back our good days our mom returned and now only a memory remains .
So I was a whisker away from becoming a Christian ...if you can call the Jheovahs Witness Christian s ...as they considered every religion on earth besides their own as heretical.
So the Church has been my fascination I began shooting St Peter Church when I had my workplace at Baba Nagar .I spent most of my time here shooting Christmas Eve Mass New Year eve Mass Good Friday Easter Adoration Baptism Holy Communion births and deaths thanks to Fr Jaun Fr Lawrie I shoot the Loyola feast but the person who really connected me to Jesus and his backyard at Bandra was my dear friend Darryl Luke Loyola.
Without him I could have never shot St Peter Church and I shot St Theresa Church St Andrew Church Mount Mary St Anne Mount Carmel and Sacred Heart Khar .
Than I met Jo of the Cross began shooting Good Friday and 14 stations of the cross for many years .
Both my granddaughter s have been shooting St Peter's since they were 2 year old
St Peters Church has been my home in more ways than one poetically and cosmically .
And the Latin Mass I shoot every year ..here .

The World Of Muslim Beggars ... 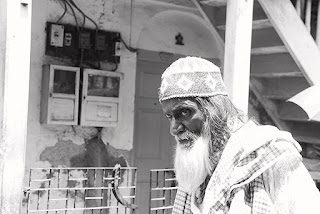 I normally never use the tripod or monopd I have both of them Manfrotto that I bought a very long time back..
But on Easter Sunday as I wanted to shoot the Latin Mass I carried the monopod with me to St Peter Church..
I had taken permission from Fr Jaun the night before and I would have shot it from the doorway as I did last year but a kind person attending the mass invited me in so I shot it from the back of the chapel.. it is above the main church..
After I finished shooting the Mass I decided to walk home via the Bandra Bazar with my monopod and thus shot the market scenes ..and I caught this beggar candidly without him being aware that I had shot him..
These beggars are known as Bawas ,,they beg for a living blessing people that give them alms ,,this Muslim beggar hardly talks I have shot him earlier too.. most dont like being shot and can get very abusive but I shoot them somebody has to tell their story.. their trials tribulations .. and nothing can change their fate ... they will most probably die begging on the streets ,,
This beggar is very different from the two senior beggars Jaffar Bhai and Khwajah bhai.. they are humble polite and both have daughters in their hometown.. it might sound strange both save money for their daughters and grandchildren.
The other beggars in my lane are migrants from Malda West Bengal..my lane on Fridays has become an abode of crippled beggars , women beggars with kids and these women I have shot for over 6 years now .. I know their kids ,,,
The old beggars are reticent beg silently.. a lot of beggars come here but disappear soon after .
All these beggar blogs are part of storyboard at Flickr Muslim Beggars of India ,, I shot them for reasons unknown to me ,, and certainly not to make money,,, photography is purely a hobby the only medium that documents life as fine art too .
As I have begged with the Rafaees and my Naga Guru.. eaten left over food I think I know what the beggar psyche goes through and I did trample my ego insanely as I stretched out my hand from door to door along with the band of Naga Sadhus at Nasikh..
I shoot a few communities ,, and beggars is one of them but it is the Muslim beggar I shoot prolifically ,, among the Muslim beggars are also beggars from the lower caste non Muslims who wear hijabs or a skull cap beg and it does not matter necessity is the mother of invention.
The most fascinating specie of Muslim beggars I found at Ajmer during the Urus and at Taragadh ,.. most of the beggars are fund near Sufi Shrines ,,,Mosques and other religious places ,,, I shot Muslim beggars during Pitru Paksha at Banganga ..
But strangely I never shot Muslim beggars at the Kumbh ,.. but yes I did shoot a Muslim boy I shoot him every year at Ajmer he is badly deformed no legs just one tiny hand he was dressed as a Hindu with vermilion on his forehead he was a good actor he pretended he did not know me and I too was dressed as a Hindu with ash on my forehead at Ramkund .. Nasik Kumbh 2015 .
By Firoze Shakir Photographer No1 - March 29, 2016