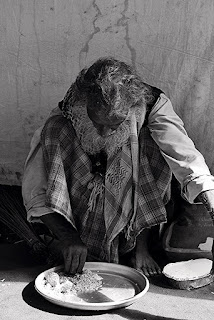 Translated in simple language it means every crumb you get to eat has your name on it ,,but I added a corollary every crumb you eat has the name of the person who feeds you .. your host Bhagwan God Allah.

And this was shot during the Urus of Haji Abdul Rehman Shah Baba. Dongri . I had gone to meet the Rifais body piercer Sufis  a sect I  had been documenting for many years and this was the 100 urus ,, also Malangs had come from far .. and the gathering met at the Dhuni the Holy Fire where they smoked chillum ..

And for me as a photographer this is my genre people photography which centers around culture rituals customs ..I fit in like a glove in Sufi events as well as the Naga Kumbhs ,

I have endeared myself to these ascetics monks mystics shamans exorcists ..it took me several years , it was not easy simply as they felt in the earlier days I was trespassing on their esoteric nature ,, they had isolated themselves from society ,,I had squabbles but in the end I was seen as an harmless person but someone who respected them completely Sufis Malangs or Nagas ..so I became a Malang in 2011 ,,,

Shooting people or rituals during Urus time is a heady notion.. I prefer Ajmer any day ,, and it is here that the Rifais and the Malangs sit ,, at one place near Jalali Chowk.

But I would love to go to the annual Urus of  Zinda Shah Madar Makanpur but it has not been possible ,, for last two years .. next  year I will go come what may.


I have never been to Kaliar  Sharif but I am very close to the Qalandari Malangs  too.

Street Photography ,,Is Shooting The Soul Of Silence

What is bothering this kid ,,I dont know but I took this shot and left it in motion as I had shot it .. and I shot this in August ,,in color  but now seeing it as BW it adds another dimension..

In color the background was light muted green..pacifying the child s curiosity in BW it is stroking the fires in this childs mind ,,

I leave his thoughts in suspension.

This morning I went out to play tennis but later realized when I saw an empty court that today is Bhau Beej and Maharashtians celebrate it with gusto.. so I walked back home I was in mood .. though I shot a garbage video and the video of the little child with a damaged eye who comes every morning to beg in my lane ,, I like talking to her sh wanted to have a cup of tea I gave her a tenner ..her dad has gone mad and she supports her mom 5 sisters by begging she lives in the slums she told me ,,she makes more money than the few old beggars sitting on the other side of this lane .

They watch her enviously ..so life on the streets can be full of pathos even morbid it depends how you interpret the metaphor of life . 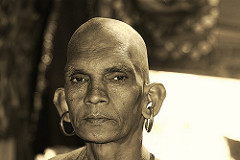 In my life I have shot the androgynous denizens prolifically ,but Madhu was a phenomenon I could never gauge ,,her motto was ,.. Jo De Bismillah Jo Na De Illilallah .. We met at Haji Malang and I spent a lot of time with her , she had traveled extensively and was a mystic guru of the hijras ,, totally barebreast with a thin muslin cloth around her lithe body,,
She lived her own life on her own terms and was happy that I was listening to her I shot her , her various moods , her restlessness and her dark morbid nuances .
I never met her again though I met her host at Ajmer and this is the nature of their androgyne ,, they are here they are they are nowhere ,,
And this is all part of my 20000 explicit documentary on hijra life , their religiosity spirituality ,,restricted from public view ,, Madhu was a dark soul did dua tawiz exorcism and tried to penetrate my angst ,, there was something very mystically powerful about her ,,, and she respected me for my Shiasm.. and I had not yet become a Malang when I met her in the mountains ,,,
By Firoze Shakir Photographer No1 - November 13, 2015

The Humble Street Barbers of Bandra 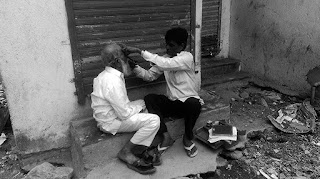 There are some communities I have to shoot ,, and it is an urge but not an obsession..
First street barbers the nomadic type moving from lane to lane , searching for clients and most have fixed customers regulars ,,

I also try to shoot their videos if possible ,,,

The next are the Dabbawalas ,.. I have to shoot them I will stop them chat with them and shoot a few frames ..the dabbawalas fascinate me I dont know why .

Next woodcarvers at Bandra SV Road I shoot a few I know and there are others who are bit snooty ,,

The Whippers of Ma Ambe those who hit themselves with whips and beg for alms .

Beggars mostly Muslim beggars of all shape and size and deformity ,,

Urchins at traffic signals including women posing as Hijras at the Khar Telephone Exchange Signal.

The Hijras I shoot it is part of my poetry and cosmic destiny ,,these are mythical creatures Ardh Nari Nareshwar avatar of the androgynous entity symbolizing Lord Shiva,,


The icegolawalas  in the slums ,, butchers mostly buffalo butchers ,,

Mystics Malangs Rafaees and other such people including Naga Sadhus ,, Aghoris etc.

I shoot garbage as catharsis to the restlessness of the garbage in my soul.. I become superfluously one with garbage ,

I would like to shoot the Circus but seeing my attire they would hire me as a clown to entertain kids ..

I shoot life in thee slums , demolition of slums I try to avoid shooting disasters but shoot it as an aftermath and the rebuilding process .

I dont shoot clouds ,,
I dont shoot sunsets sunrise
The only mountains or molehills I shoot are garbage dumps in my backyard.

I shoot the redlight area ,, sometimes ,,

I shoot the East Indian ethos ,, their houses lifestyle etc,.


I shoot Jain sadhvis and monks ,

I used to shoot the guys who collect gold dust near Jain mandir ,, tough job..

I shoot drunks drugaddicts and the homeless sleeping on the streets ,, I avoid selfies ,,

I wanted to shoot the tankwalis ladies who wore no blouse and refurbished the grinding stone but they disappeared ,, the new ones are fully attired ,,

So these are people I shoot ,, I also shoot cows eating plastic bags and garbage ,,

I used to shoot the crossdressers and the gay pride ,,,and a group of people called Sada Suhagins Sufi sect ..men dressed as women but not transgender ...

And yes I shoot the ear cleaners and chiropodists

Email ThisBlogThis!Share to TwitterShare to FacebookShare to Pinterest
Labels: The Humble Street Barbers of Bandra

This Lady Is More Than My Mother ,,, Wassim Qazilbash My Mother In Law . 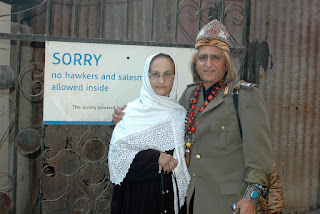 She is a Maulaiee ,,, a total incorrigible Tabaraiee and a hardcore fan of Maulana Agha Ruee ,, She was never scared of anyone ,,, even during the Sunni Shia riots that are common place in Lucknow she braved the streets to get food for her family ,, I respect her tremendously ,,they were once very rich wealthy and things changed for over 35 years they lived on rent and recently got their own house at Nakhas .

She treats me like her son.. and if she could she would hide all my daggers on Ashura day ,, she rushed out on the streets of Nakhas pleading me to stop cutting myself ,, she did that last Chehlum got some boys to take away my daggers ,,but I borrowed the daggers from Banney Bhais anjuman.

She pampers me no end , making my black tea , and cooking my favorite dishes , they are not rich but she is rich in her love for me ,, she wanted to drop me this time at the station I refused ..she liked my mother a lot and now with the death of both my parents she tries to become my mother and my father too.. and she remembers me as the guy who carried her daughter on his shoulders ,, as they lived in the same place as my cousin Huzoor Miya . who was like a foster father to her daughter Afshan now my wife ..

I have in my 63 years never sen a lady of such formidable strength of character , she is great noha reciter and is always on her feet .. never resting though she has not been in good health ,, and her husband too is in very poor health.. now they spend their times taking care of their granddaughters Sakina and Sughra.
By Firoze Shakir Photographer No1 - November 13, 2015