The Tadgola Wala of Boran Road 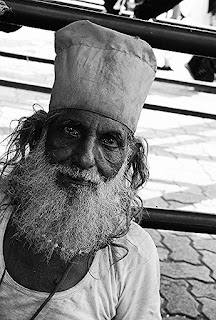 He is a hawker , earns his bread through the sweat of his brow , he is a very simple man sells his wares sitting besides Hindu hawkers and they all respect him, he is low profile , polite courteous ,,He likes me a lot and will offer me tea and now while I am posting this here I hope to take his video.. find out more about his life ,, he is a Chishtiya follower of Holy Saint  Moinuddin Chisti Kwajah Garib Nawaz ..

I have never asked his name I avoid asking personal questions I shoot pictures I shoot faces , faces that maybe Muslim Hindu but are all faces of India ,, I shoot India I shoot Indianness ..

And many years back when I joined Flickr as a newbie and was posting pictures of Shia Moharam Rituals I got a message  that I had not deleted after so many years  by a shit head called Innocence Now ..A Lucknow man who living in Lucknow does not know that Lucknow is first foremost the citadel of Shiasm.. perhaps he thought I was an Asshole I was born in Lucknow too

I request you with folded hands


Dear Sir,
I request you with folded hands please do not post pictures of blood. I am quite sensitive to feelings of Shias and respect them because I liked the nawabs of awadh I am myself a Lucknowite and have many shia friends but perhaps it would be better if you kept photos for viewing by your friends and acquaintances it is very likely that people who know nothing about sacrifice of Shia leaders would not understand the message that you might be trying to convey and form a bad image of Lucknow. I am sure you yourself will not like that.
I hope you will kindly consider my suggestion. I will be indebted to you for the same.


I mean I post pictures that are photo journalism, I dont glorify blood letting , I post pictures on my internet time I pay for my Flickr time and instead of finding fault with my pictures why does he not with folded hands ask his Uttar Pradesh government to improve the Old Muslim areas of Lucknow , living in ghettos , why does he not with folded hands appeal to Sunnis Shia to end sectarian strife ,,and get rid of Mayawatijis statues horrendous elephants and the misrule of the Samajwadii party the Hindu Muslim riots , the death devastation of poor pilgrims by a government that could not take care of the disasters at the Maha Kumbh..
I am sorry I was born in Lucknow but thankfully I am a hardcore Mumbaikar ..I am really happy my parents left Lucknow to start life fresh in Mumbai living in penury in a slum and than pushing their way upwards by honest work dedication..

Come to Mumbai see the plight of Bhaiyyas  Mumbai . I beg you with folded hands ,see their miserable life , and bonded in slavery as menial workers ,,

Shut the Fuck Up Innocence Now

Email ThisBlogThis!Share to TwitterShare to FacebookShare to Pinterest
Labels: innocene now, lucknow, shut the fuck up, The Sufi Hawker 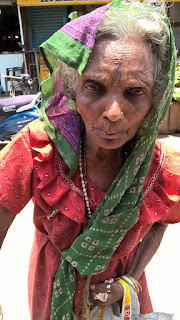 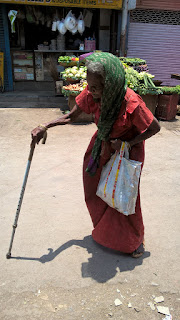 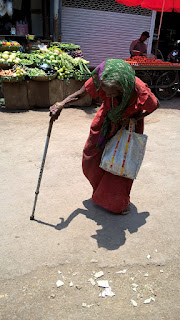 I walked to the Bazar to give 50 copies of Nerjis article in Bandra Buzz the koli ladies wanted copies , the shopkeepers and the Desi Murgiwala I dropped a copy for Rajiv Hans and to people she shoots ..But of course she mostly shoots beggars and for them it would be of no use .. I gave copies to Kalidas Provision stores ..simply because to encourage parents to nurture their kids and let their talent art grow .
While returning home I met this old destitute lady I have shot her and I give her money , the moment she takes the money in her hands she starts invoking a God who has forsaken her to give me peace wealth and happiness .. And I am confounded I tried to talk to her but she is very bad shape her voice inaudible ,,she stays near my house I guess on the streets ..I really have no idea .
She wears the same clothes and takes her a long time to move a step..but mind you she does not beg at all..and when my grandchildren come back from their vacation I will ask them to save their pocket moneys for her ..
And as a photographer who taught my grandkids photography I made sure I taught them to see human degradation human misplaced values through the lens .. this was the holistic positive part of photography.
No sunsets , no chubby kids only humanity ,,I taught them to shoot the transgender , street performers and the common man.
Some friends rebuked chided me for exposing them so early but they were my grandkids I wanted them to see the world through the bioscope of my camera ..
I made them shoot the guest photographers who came to our house made them watch observe ..I know my grandkids will never be photographers I am sure of it , but long after I am dead and gone my grandkids wont be hesitant or look confused taking a picture ..I pushed it deep into their subconsciousness .. without making them ever feel that photography was only meant for making money ,,
This is my gift to Marziya and Nerjis ,,,the shutter and aperture of my old age and existence .

Email ThisBlogThis!Share to TwitterShare to FacebookShare to Pinterest
Labels: Sometimes Death Is Preferable To Old Age

Death Where Is They Sting ... 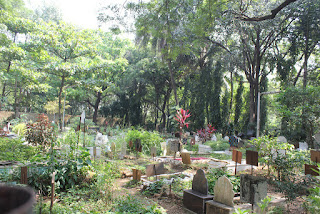 I have been highly impressed by Ello , an innovative ad free website , and it was purely by Invite , and my dear friend Photo Walk Guru Mr Thomas Hawk was a member he had given away all his invites but he posted a tweet asking any of his friends who had add an extra invite to give it to me ..So his friend Tyson Jerry kindly gave it to me ,,
And thus began my tryst with Ello ..I posted my world made friends became a hard core fan of Paul Budnitz one of the founders ..and was interviewed by @yourdailybread a guy named Jeremy ..I one day Interviewed him too
I like Ello my pictures look good on a big format and a lot of creative artists ,bloggers , are on Ello ..
All my original stuff street angst street pictures originate as photo blogs at Flickr .com I than post them as a link at Twitter 159 Tweets since 2008 .
I sometimes post a link at Google + and Tumblr..but I have a delirious premonition Google + and Tumblr will wind up very soon.. Competing with Facebook is tough and I salute Mr Vic Gundotra after Vic left Google + it has never been the same .
Mr Thomas Hawk has helped me a lot when my Shia bleeding pictures at Flickr , put me in a soup , restricted by staff he got it sorted our for me including my Flickr pro account ,,
And I have been a Flickr photographer since 2007 over 337,720 Photos 42,114,622 views since 10 June 2007 ,,Both my granddaughter have Flickr accounts and Twitter handles ,They are on Facebook I have deactivated it since a few years.
For those who send me page links ,I simply avoid them I dont use Like button on Facebook nor do I tag or poke people .
And the worst scenario here at Facebook is cyber bullying , posting hateful posts on peoples religions ,,there is more Tabarh on Facebook than even in a Shia Mosque ,,People posting pictures from the net ..Hardly anyone uses Original Content.
Facebook for me is not A Mosque , A shrine or a Temple or Synagogue ,,my religiosity is my personal affair ,,I shoot all religion .. I show respect to my cultural Inheritance and despite being a Shia Muslim majority of my friends are Hindus Christians Parsis..I have a lot of Sunni friends ..and luckily I stay away from Tablikis Ahle Hadees and Wahabbis ..
And I would rather be a Hindu than be a Salafi or a Wahhabi..
And I use Facebook as an extension of my blog ,,I dont and wont shoot Moharam in Mumbai thanks to the bigots bullys in my Shia community .
I prefer Ashura in Hyderabad and Chehlum in Lucknow ,,
I told my wife kids on oath of honor if I die I want my body to be given to Medicine I want my bodyparts , my eyes my brain my liver my heart to be given to the poor I shot ,,I am not ready to screw 72 Virgins .. in Heaven,.
For me Heaven is making heaven on Earth among the poor homeless destitute
These are my personal views ..I told my wife I dont want prayer meetings and no remembrance ,and my only death wish is to pay of a few friends who helped in my very bad times I pray that I clear their dues when Death comes to take me back.
By Firoze Shakir Photographer No1 - May 20, 2015