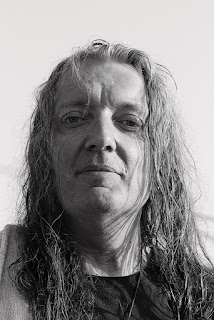 I first met him at a procession passing my Akhara ,,his procession was totally packed with foreigners all devotees of a Indian Mahant Saint ,,

He looked at me dressed in saffron bald and said you are Firoze the Malang.. and he said he reads my blogs at Flickr and my series on the Naga Sadhus .

Than I met him the last time along with his Guru taking a dip at the river Shipra ,,, he told me his name but I cant recall it ,,

And these are true lovers of the Indian spirituality ,,of Hope and Hindutva.
By Firoze Shakir Photographer No1 - May 11, 2016 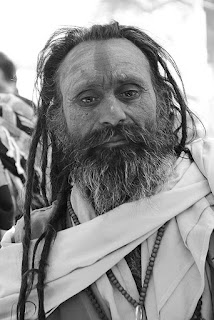 The Kal Bhairav temple is a Hindu temple located in the Ujjain city of Madhya Pradesh, India. It is dedicated to Kal Bhairav, the guardian deity of the city.[1] Located on the banks of the Shipra River, it is one of the most active temples in the city, visited by hundreds of devotees daily.[2] Liquor is one of the offerings made to the temple deity.[3][4]

The present-day temple structure was built over the remains of an older temple. Images of Shiva, Parvati, Vishnu and Ganesha belonging to the Parmara period (800–1305 CE) have been recovered from the place.[5] The temple walls were once decorated with Malwa paintings. However, only traces of these paintings are visible now.[6]

The original temple is believed to have been built by an obscure king named Bhadrasen. It has been mentioned in the Avanti Khanda of the Skanda Purana.[6][2] The present-day temple structure shows Maratha influence.[4] According to the local tradition, after the Maratha defeat in the Third Battle of Panipat (1761 CE), the Maratha general Mahadaji Shinde offered his pagri (turban) to the deity, praying for victory in his campaign to restore the Maratha rule in North India. After successfully resurrecting Maratha power, he carried out restoration of the temple.[7]

A replica of the temple has been established on the Bhuj-Mundra road in Gujarat.[8]

The deity[edit]
As the name suggests, the temple is dedicated to Kal Bhairav (or Kala Bhairava). The deity's image is a face in form of a rock layered with kumkuma or vermilion. The deity's silver head is adorned with a Maratha-style pagri, a tradition dating back to the days of Mahadaji Shinde.[7]

The worship of Ashta Bhairava ("eight Bhairavas") is a part of the Saivite tradition, and the Kal Bhairav is considered their chief. The worship of Kal Bhairav was traditionally popular among the Kapalika and Aghora sects, and Ujjain was a prominent centre of these sects.[6]

Kal Bhairav is the guardian deity of the Ujjain town:[1] he is considered Senapati (Commander-in-Chief or Chief General) of the town.[9]

Liquor offering[edit]
Liquor is offered to the temple deity as one of the five tantric ritual offerings known as panchamakara: madya (alcohol), maansa (meat), meena or matsya (fish), mudra (gesture or parched grain) and maithuna (sexual intercourse). In older times, all five offerings were made to the deity, but now only alcohol is offered; the other four offerings are in form of symbolic rituals.[3]

Outside the temple, vendors sell baskets of offerings, containing coconuts, flowers and a bottle of liquor.[10] In 2015, the State Government set up liquor counters outside the temple to ensure that the devotees are not swindled by unlicensed vendors of alcohol. The counters sell both country liquor and foreign liquor.[11]

Every day, hundreds of devotees offer liquor to the deity.[2] The devotees hand over the liquor bottles to the priest, who pours the liquor in a saucer. He then offers prayers, and takes the saucer near the deity's lips, which have a slit. He tilts the plate a bit, and the liquor starts disappearing.[3] About one-third of the bottle is returned to the devotee as prasad.[10]

The temple priests as well as several devotees claim that the slit doesn't have any cavity, and that the deity miraculously swallows the liquor offered to him. However, the temple priest does not allow the visitors to examine the statue. He also claims that only he can perform the miracle, and that the others who have tried to make the statue swallow the liquor have failed.[3] 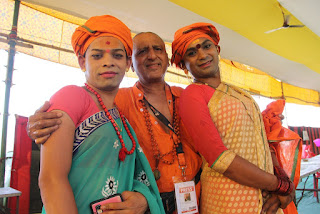 Both these comely ladies transgender touched my feet and asked me to bless them and they were in awe as Guru Laxmi informed them I was her oldest disciple and to take care of me and my friends Francois and Antione ,,and their friend Sandip.

We were served cabbage bhaji chappatis rice and Francois  and Antoine were very hungry they had not eaten since morning ,, so this was much needed ,,and they made the most of it ,, there was a lot of picture taking as Antoine was the cynosure of all hijra eyes they wanted selfies with him...

I treated them with respect and this fatherly attitude towards them made a great impression.. and most of the Hijras at the Kinnar Akhara were from Mumbai ,,

Guru Laxmi and I have been friends much before she became a transgender those early days of Bollywood when we worked together on a film.. she was the dance teacher and I was the high end tailor ,,,,

It was Guru Laxmi who urged inspired me to start my Hijra Eunuch blogs that I later named it as Hijras of India ..

However I surrendered the domain and now all my Hijra poems stories blogs are at Flickr not for public view ,, I also removed my documentary on Crossdressers , The Androgyne and the Mumbai Gay Pride from public view /

I have shot the transgender at almost all the Kumbhs that I have shot till date ,,,but I regret i could not shoot the Hijra Shahi Snan on 9 May 2016.

I was cooped up in Mumbai. 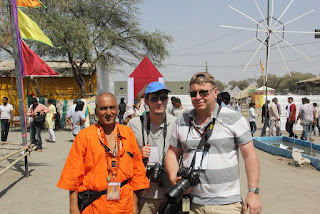 I met Francois my French friend at Ram Ghat shooting the Shahi Snan and Francois and I and another friend Boaz had shot Ashura Moharam in Hyderabad .
So Francois was indeed very happy that we were meeting again at Ujjain..however I had shot enough footage of the Shahi Snan with my Naga Guru so I moved on and Francois and I connected again a day after the Shahi Snan ,, they came to our Akhara to visit my Guru and than decided I should come with them to shoot Mosques at Ujjain.. I was feeling a bit uneasy as I wear only saffron at the Kumbh and did not have any other clothes ,,
Than last minute I decided why not go and shoot the Kinnar Akhara as Guru Laxmi and I are very close friends and this would be a great chapter to our Ujjain Dairies .
So we took a ricksha and were lucky that Guri Laxmi treated us lavishly ,, great lunch and a very lovely time shooting her and her Kinnar women.
This entire documentary of my tryst with the Hijras at the Kinnar Akhara I have restricted from public view and ,,,we shot a lot for almost 3 hours ,, We listened to the fight struggle that Guru Laxmi had to set up the Kinnar Akhara at the Ujjain Kumbh ,.some of the hardcore Sadhus were not in favor of it despite the fact that the hijras get their spiritual sustenance from their relationship with Shiva ,,, Ardh Nari Nareshwar.
Guru Laxmi had invited me for her Holy Dip Shahi Snan on 9 May but I was unable to go...this was a great regret ,,they wont be taking art in the last Shahi Snan 21 May 2016 .
From here Francois and Antoine left Ujjain to shoot Hussain Tekri Jaorah ,, the spiritual mental hospital of the possessed of India ...
I returned to Mumbai with my Naga Guru..
Like other photographers I too want to shoot the entire Kumbh but I cant afford it I have newspaper or magazine support and no sponsor ,,, and all this requires money,, but I am happy I shot what I was destined to shoot ,,
I shot Swami Avdesh Anandji taking a dip I shot over 60 videos ,, I think that was enough for me.
By Firoze Shakir Photographer No1 - May 11, 2016