The Lazy Confused Am Admi Of Bandra ,, Is Dreaming Of Acche Din 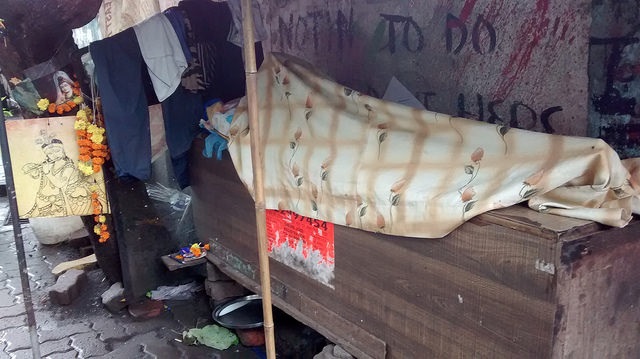 who to vote
congress
bjp or
independent
candidate
he confusedly
wonders as
his sterile
mind revolves
away from his
garrulous nagging
wifes rolling pin
she got fucked
tired threw him
out  locked the
doors she wont let
him in ..twice before
in his drunkenness
he had broken her
nagging nose her
crooked chin .
while he was
asleep she poked
his balls with a
safety pin
deflating his
languishing libido
his parts made of tin
he was a sad case
he could neither
get it up or let it
go in ,,i am talking
about his dreamy
desires accelerate
but the engine
would just not start
cursing cussing
where to begin
the pain pathos
of our man Flynn

About Lalbagh Chya Raja - The Pride Of Mumbai 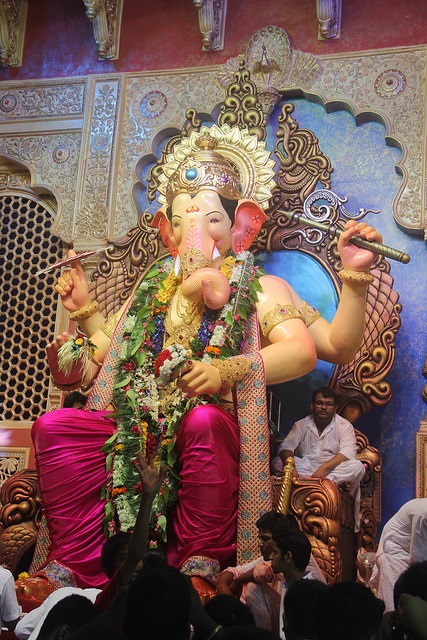 Lalbaugcha Raja (Marathi: लालबागचा राजा) is the most famous Sarvajanik Ganapati, [1] kept at Lalbaug, a prominent locality in Mumbai during Ganesh Chaturthi festival. The idol is kept for public display for Eleven days thereafter it is immersed on the auspicious day of Anant Chaturdashi.

It is believed that this Idol of Lord Ganesha is Navsacha Ganpati (Marathi: नवसाचा गणपती) (which means the "one who fulfills all wishes") and hence over 1.5 million people visit this Ganesh Pandal daily during the 10 day Ganesha festival. [2]

Since the last few years, a few days prior to the Ganesh Chaturthi, a Mukh Darshan Ceremony (Lalbaugcha Raja's first look and photoshoot) is organized by the Lalbaug Sarvajanik Ganeshostav mandal. Last year the ceremony took place on Thursday, September 5, 2013. This unveiling of Lalbaugcha Raja is covered every year by all national and regional channels.[3]

There are two queues for taking blessings of the Lalbaugcha Raja - Navsachi Line and Mukh Darshanachi Line.

The Navsachi line is for people who want to get their wishes fulfilled. In this line you get to go on the stage and touch the feet of Lalbaugcha Raja and take his blessings so that all your wishes get fulfilled. However this line attracts huge public and it takes around 25 – 30 and sometimes up to 40 hours to get darshan in this line.

The second line in meant for Mukh darshan i.e., to get a glimpse of Lalbaugcha Raja Ganesha Idol from some distance without going onto the stage. This line also attracts huge public and it takes around 5 – 8 hours and sometimes up to 12 – 14 hours to get darshan in this line as well, especially on Weekends. [4]

The Mandal, formarly known as 'Sarvajanik Ganeshotsav Mandal, Lalbaug' was founded in 1934,[6] because of a vow (Nav'as) for construction of the present Lalbaug Market at its existing place. The market place at Peru Chawl was shut down in 1932. Hence, the fishermen and vendors who used to sit in the open place vowed to Ganesha for permanent place for their market. With the consistent efforts and support of the then local Councillor-Late Shri. Kuwarji Jethabhai Shah, Dr. V. B. Korgaonkar, Shri. Nakhawa Kokam Mama, Bhausaheb Shinde, Dr. U. A. Rao and the local residents, the landlord Rajabai Tayyabali agreed to give a plot for construction of a market. As fulfillment of their wish, the fisherman and the traders established the Ganesh Idol on 12 September 1934. The idol was dressed in the customary fashion of fisherman. Since that day onwards, this idol of Lord Ganesh has become popular as He fulfills the wishes of devotees. The Mandal was formed in the era when the freedom struggle was at its peak.

The Idol[edit]
The Lalbaugcha Raja Ganesh idol has been sculpted by the Kambli family for over eight decades now. The Kambli family have their workshop in a little lane off the main road in Lalbaug, not very far from where the pandal is located.

The father of Ratnakar Kambli, who is the current head of the Kambli family, was a sculptor of idols and would have roaming exhibitions at festivals across Maharashtra. He began sculpting the idol for Lalbaugcha Raja in 1935, when some of his friends recommended his name to the organisers of Lalbaugcha Raja. After his demise in in 1952, his eldest son Venkatesh took over, and after his death, Ratnakar Kambli, the current head of the family, started designing the idol.

Kambli Arts makes the parts of the Lalbaugcha Raja idol at its workshop and these are then taken to the pandal where they are assembled and painted. Finally, Ratnakar, who is 73 years old, goes to the pandal and draws the eyes the height is 20 ft

Email ThisBlogThis!Share to TwitterShare to FacebookShare to Pinterest
Labels: About Lalbagh Chya Raja - The Pride Of Mumbai 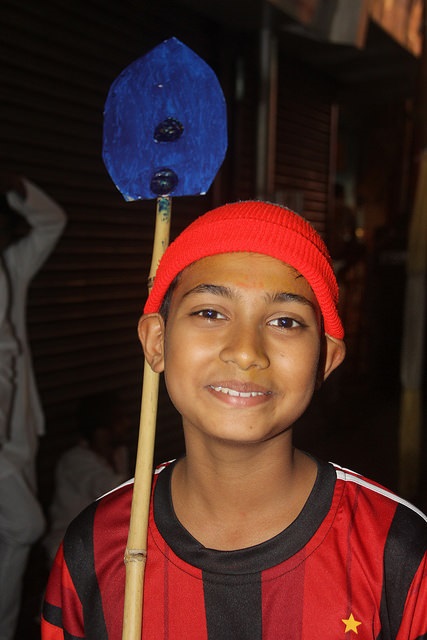 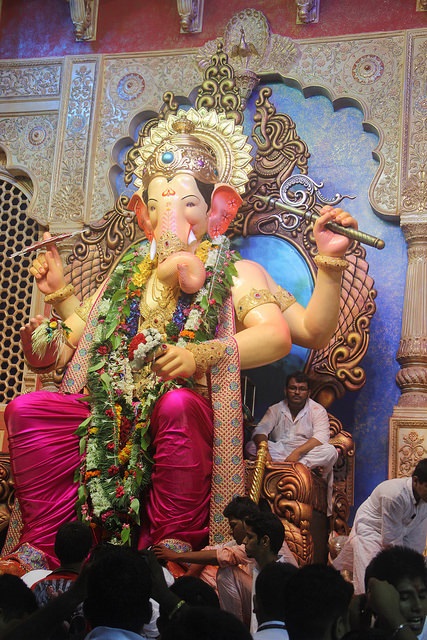 This ends the first lot there are two more memory cards to upload
By Firoze Shakir Photographer No1 - September 09, 2014

The Cosmic Ring .. It Gave Me Wings I Did Shoot Something 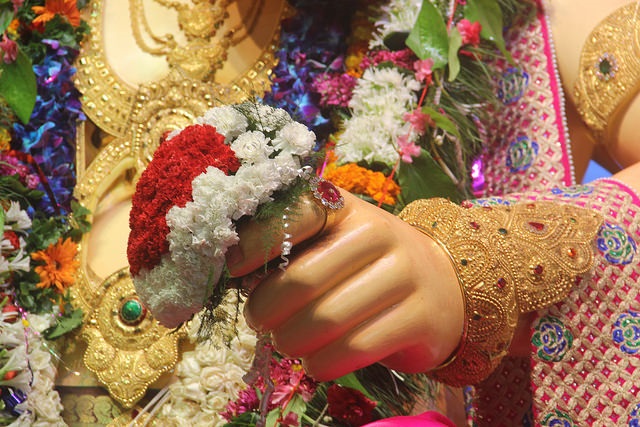 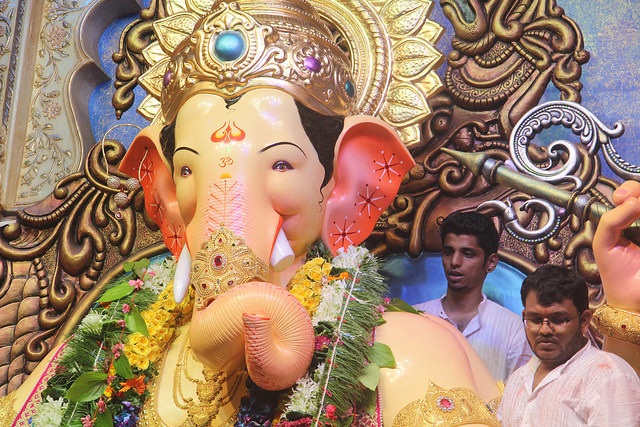 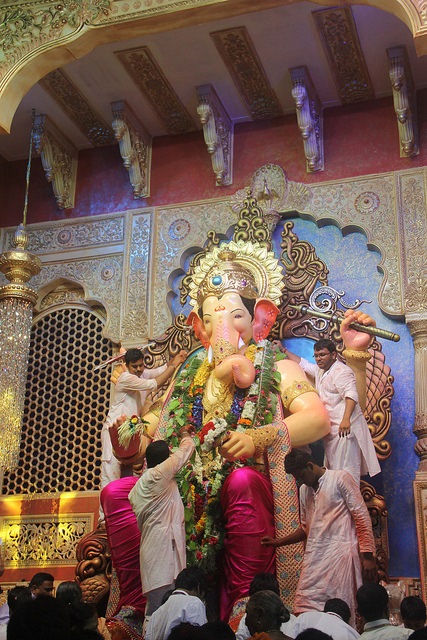 Without hurting sentiments I found outsourced security personnel rude pushy and abusive at the Lalbagh Chya Raja Pandal, the security should be polite courteous calm and not  loose their top I saw people being pulled by their shirt collars thrown out  I saw the private security act as bully's and worse than hooligans ,,

I think it is time the Mandal took this part of hispitality Devo Atithi Bhava seriously .

His Holiness Syedna of the Bohra community has one of the most dignified respectable security force that does better job than the coops because they are protecting their spiritual leader and their own people .

Even the women among the private security were badly poorly outsourced , I too was shouted at wearing a Press Card and I know this season at Lord Lalbagh Chyas House there is no love for Media at all for the negative reporting by the Press .

Both could have done it more gentlemanly.. and it is true though I have been shooting the Raja for over 10 years following him barefeet for years till Kumbharwada , some volunteers do get carried away in their spiritual frenzy , I knew one yesterday who kept targeting me my camera with loads of gulal.. this is not hospitality specially when the Lord himself invites me because he knows I shoot him passionately for others every frame I shot was for my Hindu friends and others who believe in the Lords Mahima.

I never write negative about this greatest event but its time the Mandal really took serious note for the benefit of all made the Darshan accessible in a short time for everyone with their screenings of the visitors ..Security at the Lalbagh Iconic Ganesha is very important for all of us , but at the Pandal within the Court of the Raja it should be done with humanity love and reverence .. it is these bhakts that fill the Mandals coffers the unknown faces and not the celebrity that come get their mugs shot with the Raja , does a celebrity say here take this 4 crore on behalf of Lalbagh Chya Raja and donate it to the flood ridden people of Jammu and Kashmir ,,

These are my early morning thoughts in sincerity and I have two more 8 GB cards to upload.. yes I shoot Lalbagh Chya Raja nonstop when I am in his  royal presence he is my Amitabh Bachchan Salman Khan and Sharukh Khan.. Yes he is greater than all these celebrities .and has the greatest halo on his Head and I am sure he will put some Love in a directors heart too.. Everyone deserves a second chance ,,I got mine I hope you all get yours.

Email ThisBlogThis!Share to TwitterShare to FacebookShare to Pinterest
Labels: I Think Lalbagh Chya Raja Should Have Their Own In House Security Personnel On The Lines Of His Holiness Syedna 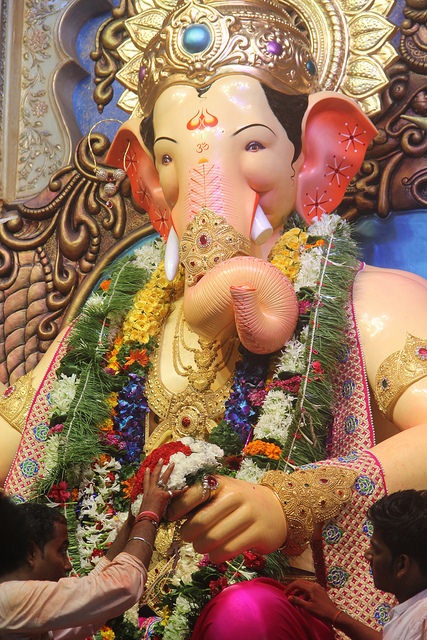 When The Lord Wants To Meet You , 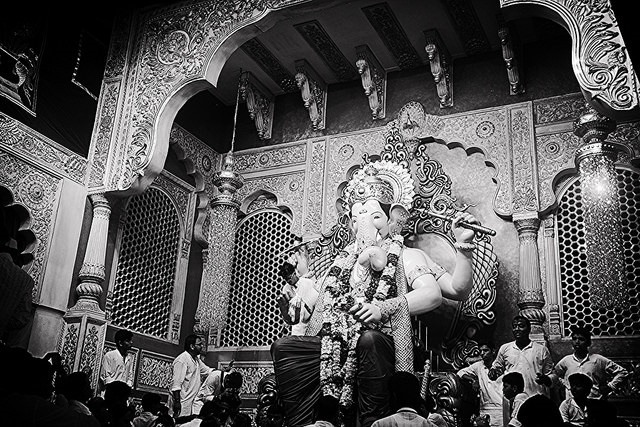 he gives you wings
to his pandal on
the crest of hope
he brings ..decked
up in all his glory
ready to leave
on a long journey
back to his home
leaving behind
something
fragrance of
his love making
you strive above
all things lal bagh
chya raja the king
of kings holding
sway on a cosmic
ring ,mere mortals
head bowed
puppets on
godly strings