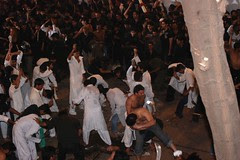 I have 675 pictures of 9th moharam unposted and I am now rushing to town to shoot Ashura and Shame e Ghariba at the Shia cemetery..I shall post all this within a few days even 7th and 8 moharam at Kaiser Bagh I have kept on hold. 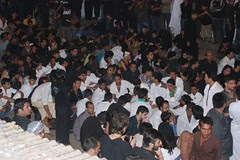 This is a band of young devoted Shia kids who only cut their foreheads , in the most vicious manner ever seen..
The lighting was very poor here and I was shooting from a parapet on the first floor with my injured right hand and camera flash..
I did request them to come in the light but they refused as soon as they cut their heads they rush with open swords and daggers on foot to the next place on the agenda Zainabia about 10 minutes walking distance or more , here they cut than to Shustri and finally to Amin Imambada the deadliest display, I skipped all the others and managed to reach Amin before them and shot pictures that are absolutely out of mindlessness..
faith and only faith and devotion of the highest order to Bibi Sakina , and her untimely death and her sufferings in captivity ubder Yazid.Bibi Sakina was a thre year old daughter of Imam Hussain..Arab barbarism did not spare kids , women , but they did spare the invalid son of Imam Hussain Zainul Abedin..
Sadke Sakina has my old stafeer Mohsin Hallori a great Kama veteran and he is about Saif my youngest sons age.
Thw members of this outfit wear pure white to signify their status a human shrouds and thats what happens bleeding non stop for over 5 hours or more.. 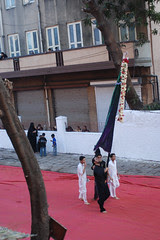 On 9th Moharam before the maghrib prayeras all the Alams of the various Anjumans, all the Alams Taboots of Kaiser Bagh move into Byculla to celebrate Shabe Ashur , the night before Ashura or the Eve of Ashura.
As this place is a bylane larger than Kaiser Bagh , the place is equally packed as the Alams Zaris Taboot and Zuljana take their customary rounds.In the middle the Kama matam and Zanzir Matam takes place..
This is the most important Juloos of Moharam in Mumbai.. the largest ever .. 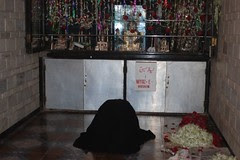 This is a Shia lady head bowed in the little Imambada in area called Honda or even its old name Savoy..at Bycyulla. the starting point of one of the most famous 9th Moharam Juloos..There is a namaz, a Majlis recited by Maulana Yasoob Abbas and heavy hard core Kama and Zanjir Matam, I shot this from a first floor parapet of Alisha Mansions thanks to the kindly lady..who gave me permission.this is a Bohra locality, and a Christian lad Jarves Ricardo Fernandes from St Marys School dressed in a black Tshirt looking like a Shia along with his Bohri friends gave me the countdown on the event before it started..later he told me he was a Catholic but knew all about Moharam, and had food in a Bohri Thali..with his Bohra friends.
The Juloos starts from here moves to Zainabia , from Zainabia to Shustri Imambada and than to Amin Imambada finally ending at Fotowat the Iranian Shia stronghold.
I shot 675 pictures, from 7 pm till midnight.
I then came to Kaiser Bagh and finally had to rush home as wife and the kids wanted to go to Rizvis for an all night Moharam vigil..
I am tired will explain this segment through pictures, most of this will be posted at my Flickr photo stream and only a few pictures cross blogged on my other sites..