The Banana Seller Has Gone To His Native Place Finally 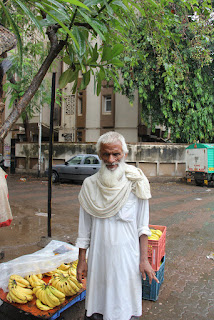 I had told you about the misfortune of this Muslim banana seller who used to sell bananas on his cart at Bandra Reclamation.

His friend who was to keep his earnings had left for his hometown without informing him causing him lot of grief, he had to cancel his train tickets , and postponed his trip till his friend returned ,, and his daughter is getting married , so he has to go make arrangement but now he will get his daughter married after Ramzan,,

Whil this was being played out , the Municipality confiscated his handcart and took away all his bananas too, he has to pay fines of about Rs 6000 ..he decided to forget the cart and began selling bananas on a small platform on the road ..

But when I shot this yesterday he was happy , his friend had returned his money , and he was catching the evening train.. what made him more happy when both my grandkids met him shook his hands and Nerjis took his picture he blessed them.

And here he touched a raw chord when he said should I bring some toys for your grandchildren from my native place .. they make nice clay toys he told me ,,I thanked him profusely and wished him a safe journey, he has given another friend of his charge of his street stall,, a Mr Khan.

I missed my walk yesterday so I walked about 5 k in the evening at the MET Grounds , and this morning I had to meet a client at Nana Chowk so I did not go for my walk  .

From Nana Chowk I took a bus that takes me through the red light area I shot a lot of frames from the bus I got off at Null Bazar , I bought a few umbrellas for my favorite beggars of Bandra from Chor Bazar.. and all my Chor Bazar friends were happy to see me in the lane next to Chimna Butcher there is a Sunday Flea Market ,, I shot some pictures here .

Than I came to Bhendi Bazar and took a bus home ,,

I just walked another 5 km at the Bandra MET Grounds ..this evening...I bought a raincoat so my mobile phone etc wont get wet ,.

Email ThisBlogThis!Share to TwitterShare to FacebookShare to Pinterest
Labels: The Banana Seller Has Gone To His Native Place Finally 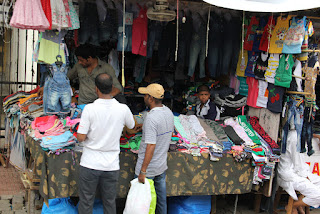 There are so many things we see but never shoot , and I shoot what my heart tells me to shoot I shot roadside dwellings , huts shanties , and they dont exist anymore ,, all demolished but I have those rare pictures the happy times all gone .. Mumbai has no soul it was robbed a stake put in by the Mumbai Municipality  rich peoples dwellings their illegal extension garages turned into shops are ignored , and the poor gets bulldozers even during rains or exam time ,, I thought these shops too might get demolished one day so I shot several pictures like a greedy man and I shoot pictures with the wily mind of Uriah Heep and shooting pictures is not for making money but as a treasure trove of memories ,,

I have so much stuff on negatives slides and my wife curses me throw it in the sea and I am still holding it to give to some curator of Mumbai archives ...but he should give me money that I will give away to the poor children of India .. This is my solemn oath .. despite my own bad times ,, I want no cent of it.
By Firoze Shakir Photographer No1 - June 14, 2015

The Marathi Lady And The Fast Changing World Of Mumbai 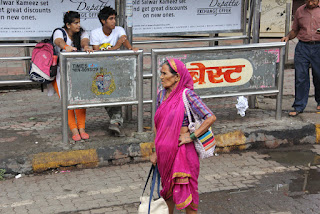 Most if my shots of the streets are by accident , I shoot from moving buses or moving cabs .. rickshas too.

I dont own a car or a bike I use public transport ,, I once had a Santro I sold it to pay part of my home loan deficit ,,down payment sort of thing..

I decided I will buy a car only after I have paid back those who helped me get this house .. till than I shall walk or commute accordingly .

This lady I presume brings lunch for the school kids and the rich need the services of the poor , mostly it used to be the unfortunate Marathi bai that did the bartan and katka ,,washing vessels sweeping floors ,, and they too their work seriously , were dedicated and loved the kids of the bosses .but soon they disappeared as their shanties were transformed into ivory towers for the super rich.. the poor Marathi Manoos with the money they got moved away to Panvel or their native hometowns .

The Marathi Manoos has always got the raw deal , these children of the soil , were made to do menial jobs . most of them had lost their hope  and future when the mills closed down.. I know this as we stayed close to Mukesh Mills ,,the deafening silence , vacuous eyes , and than alcohol took over some failed lives and yet their kids without support , tried to bring their parents ashore with hard work..

None of the political parties really cared for the Marathi Manoos ,,if they did than you wont find them working as menial mathadi loaders , selling vegetables doing the lowest jobs ,, they were betrayed by every government that came into power in the State ,, Does the Dabbawalas son has to become a dabbawala or can he not with the support of the government become a pilot a doctor or an engineer and they rave about Dabbawalas .. or the other end of Mahalaxmi Dhobi ghat where the Dhobis washermen will always remain Dhobis being shot by all the tourists who come to Mumbai ,, is this what we want to portray that we still wash our linen in public .

I can go on I have lived in Mumbai wens its glory was at its peak known as Bombay than the soul of Bombay was forcibly pulled out and put into a lifeless body of misplaced jingoism.

We had a Marathi bai at our house but my mom insisted we call her Aiee . she was elderly and honestly what we are today is because of this Marathi ladys love for us as her own childrn, her sons name was Tulsi but she loved us tenderly taught us Marathii , told us stories of Chattrapati Shivaji Maharaj and made Marathi delicacies for us ,, how can we forget her ..even after 55 years .. she lived with us at Khatau Bhuvan Wodehouse Road and stayed at the servants section of Military Quarters Colaba .

So as my tribute to Aiee I shoot the Marathi Manoos ,be it the Dabbawalas , the bhajiwalis and the Kolis too.

Yes I shot this accidentally and let words gush out of my inner angst...if I had  posted this as a picture you would only see it as a picture but I added my signature to it as a blogger ,, I let he photographer in me take the backseat ,, I remember the words of a photographer at my camera club PSI Mumbai , I was new to photography and he saw my contact sheet it had monkeys at Elephanta caves , seagulls , I had not started shooting beggars , and he said politely but scathingly ,, what are you trying to shoot  I replied with my 20 mm lens  shoved up  the ass of a donkey I am trying to shoot the arches from assshole to eternity , being a vernacular he gave me a dumb smile and moved away I did meet him recently at my Photo Gurus book launch,, and he slithered away from my pictorial presence ,,

Yes I am actually a point and shoot photographer and I use my DSLRS my mobile phone as such.. and this is not a photo but a blog .. a story within a story ..