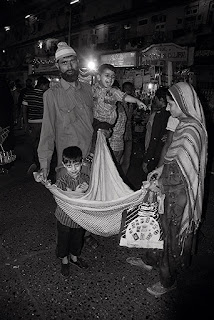 I documented the pain of the Kashmiri migrants begging on the streets of Mumbai.. and there were some who stayed back , I dont know why away from the Valley and Kashmiryat..and all these people with their family once stayed at the Bandra pipeline harassed by the cops the local slum mafia ,.. but they begged trying to make ends meet .

Mumbai is a heartless city but there is compassion for the migrant , and as these Kashmiri migrants were Muslims they got help in the Muslim slums , from the Mosques ..and they kept coming to Mumbai thousands of miles away seeking Hope .

I shot them , their kids , and it saddened me , most of them begged at the Mahim dargah lane during the urus of Makhdhoom Shah Baba .
By Firoze Shakir Photographer No1 - July 27, 2015

Email ThisBlogThis!Share to TwitterShare to FacebookShare to Pinterest
Labels: The Kashmiri Beggars 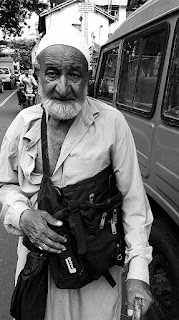 He approached me at Waroda road  Bandra, asking me to help him , he was in bad shape , and he told me he was a migrant from Kashmir had lost everything in the floods.

I gave him some money, but I felt sad for him and others like him I have been shooting beggars from Kashmir , I shot them with their families begging from home to home , standing outside the Shia mosque ..begging at the bazar .. appealing for ration food , clothes ..most of these migrants I am told take shelter in makeshift tents near the Bandra pipeline .

They are dressed neat , and they do the rounds of the city ..during the Urus of Holy Saint Makhdhoom Shah Baba Mahim you will find their women begging in large numbers at Dargah lane .

Last year I saw a lot of them begging at Talkatora Karbala Lucknow  invoking the Martyrs of Karbala pleading wailing for alms as they said they had lost everything in the floods in Kashmir.

I have met them begging in Hyderabad too..thousands of miles away from the Valley ..in midst of urban chaos ..they hardly get jobs as the public does not trust them.. a few were employed as security at the Shia cemetery in Mumbai Mazgaon  but I never saw them again.

Most of the Kashmiri migrants come to beg in large numbers in Mumbai during Ramzan and Eid Ul Adha ..

Has the Kashmiri governments tried to find out what ails the poorest of poor Kashmiri.. I  mean its a problem they should solve ,,why is help not reaching these people or are these people lazy dont want to work just beg.. I have never talked to them..but I feel sorry as these guys are physically fit and force their young wives daughters and little kids to beg with them too..what is the real truth I dont know .

My set here at Flickr is called Kashmiri beggars .. 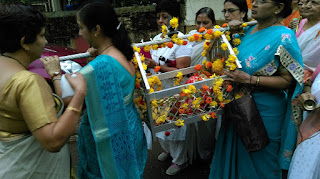 Ashadhi Ekadashi is more of a religious procession festival and is celebrated during the months of June- July (Aashaadh Shukla paksha). People consider the two eleventh days, "Ekadashi", of every month to be of special importance. But the eleventh day (bright) of Ashadh is known as the great Ekadashi or Mahaekadashi. This Mahaekadashi is also known as Shayani Ekadashi, because on this day Vishnu falls asleep to wake up four months later on Prabodhini Ekadashi in the Kartik month. This period is known as Chaturmas and coincides with the rainy season.
Ashadhi Ekadashi is the day of fast and on this day people go walking in huge processions to Pandharpur singing the Abhangas (chanting hymns) of Saint Tukaram and Saint Dnyaneshwar to see their God Vitthal. The yatra starts in Allandi and ends on Guru Poornima day at Pandharpur.
The Feast
The feast of Ashadhi Ekadashi is celebrated with great solemnity at Pandharpur. Hundreds of thousands go in procession from different parts of Maharashtra, some carrying palanquins with the images of the great saints of Maharashtra. Dnaneshwar's image is carried from Alandi, Tukaram's from Dehu, Eknath's from Paithan, Nivruttinath's from Trimbakeshwar, Muktabai's from Edlabad, and Sopan's from Sasvad. 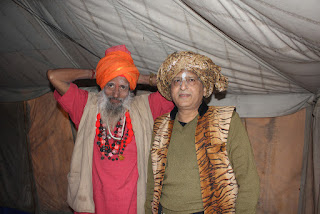 Went to meet my Naga Sadhu Guru Shree Vijay Giri Maharaj of Juna Akhada at his Ashram near Film city ,,we were meeting after the Maha Kumbh ,,I presented him about 50 ( 10 by 12 ) prints of our first meeting at Nasik Kumbh 2002 of his ling kriya and he and his two disciples pulling a car with their ling at Trimbakeshwar,.one of his disciples Shankar Giri died recently ,,I was there with him for some time before he leaves to set us his tent at Sevagram..Trimbakeshwar ,
All his disciples know that I am a Muslim but they touch my feet out of respect and my cosmic proximity to their Guru.

Because of Shri Vijay Giri I met the main Maha Mandleshwars at Maha Kumbh Allahabad ,,of course they dont know me as Firoze but Ashok Bhartiya the name my guru has given me to save my ass from bigots ..everyone is not like my Guru.. thanks to him I shot 3500 images and had one of the most enlightening experience ,for me the Maha Kumbh was about culture and part of my 65000 Hindu Blogs at Flickr titled Hope and Hindutva a Message of Universal Peace ..

This was an image shot at the Maha Kumbh before meeting the main Maha Mandleshwar of the Naga Sadhus Juna Akhada at Sector 4 Allahabad.

My Maha Kumbh set is restricted and by me and can be viewed only by Flickr members ..because of frontal nudity ,, I even shot hijras taking a dip in the Sangam.. these pictures are disabled from public view .
By Firoze Shakir Photographer No1 - July 27, 2015