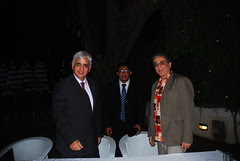 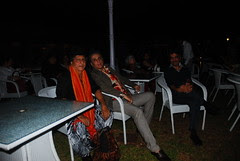 The Dam Madar Malang With Aditya Raj Kapoor and Khaled Mohomed, a photo by firoze shakir photographerno1 on Flickr.
By Firoze Shakir Photographer No1 - November 27, 2011 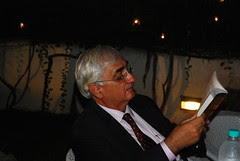 I was invited last evening by my very dear friend author Rajiv Soni for the launch of his new book Sehar on 26 /11..It was a nice gathering by the poolside and Rajiv Soni and a few of his close friends read out excerpts from his book..to a lot of applause and great mouth watering snacks.

The Chief Guest was Hon Minister for Law and Justice Mr Salman Khurshid.. he praised and lauded the efforts of Rajiv Soni, and spoke about the pain of the Mumbaikars on the day none of us as Mumbaikars and even as Indians will ever forget.

As I had carried my camera I shot a lot of frames in poor dim light.. the other guests were Mr Jalees Sherwani eminent film writer and head of the Film Writers Combine.. Mr Aditya Kapoor son of late Mr Shammi Kapoor. including a teacher of Rajiv Soni who spoke generously of Rajiv as a student.

There were many personalities here Khalid Mohomed Sab , Rael Padamsee my childhood friend her brother Ranjit Chowhdary and I were bum chums..at Wodehouse Road..

There was a Mr Dilip Sab who was a victim of the 26/11 attack at the Taj and spoke of his tragic experience and escape.

It was a great evening and Mr Jalees Sherwani dropped me to Bandra..

A dynamic leader of mankind. who has combined in himself the introspection of a man of learning and the boldness of a man of action, former Minister of State for External Affairs. His deep sense of nationalism and secular outlook has led to the setting up of a chain of Delhi Public Schools both in India and abroad.

"If their (muslims') forefathers decided they wanted to stay with 80 percent Hindus rather than 100 percent Muslims, go to Pakistan -- if they decided to stay here, it means they're liberal, it means they want a secular country, they want a country that isn't dominated by religion"; Salman Khurshid.


Shri Salman Khurshid is a well known educationist, social reformer and political thinker having a powerful emerging presence in the Indian political scenario. He is a befitting heir to a great legacy of national service bequeathed by Dr. Zakir Hussain, his grandfather and the late President of India and his father Mr. Khursheed Alam Khan, the former Governor of Karnataka.

A product of DPS, St. Stephen's and Oxford, he is an eminent lawyer of the Supreme court of India and an orator par excellence. He is also a prolific author and some of his eminent publications include - 'At Home in India', 'If Winter Comes', 'Beyond Terrorism'.

As President of the DPS Society he has provided dynamic leadership and vision encouraging the society to emerge as a powerful agency for national educational growth with a transcontinental identity.

He is closely associated with many national and international organizations in spheres of education, humanitarian work and law as Patron and Member.

He has also completed his thesis for his Phd in Oxford and is awaiting a formal approval from the authorities before he is bestowed the prestigious Phd from the Oxford University.

He has been selected as a member of the Congresss Working Committee in July, 2004.

Salman Khurshid (b 1953, Aligarh) did his schooling at St. Xavier's School (Patna), Delhi Public School (Mathura Road, New Delhi), and college from St. Stephens College (Delhi University) and St. Edmund Hall (Oxford). He then taught Law at the Trinity College, Oxford. A renowned legal thinker and a practicing senior advocate at the Supreme Court of India, he is known for his varied interests in different fields. He leaves a monumental impression in every field of endeavour he engages in and always looks for new vistas of action. As an educationist his calibre is unparalleled. In the capacity of President of Delhi Public School Society he took remarkable steps to expand this elite institution network from 14 to 75 schools in India as well as abroad. He established in Mewat, Haryana (a totally backward area where literacy is abysmal) 3 satellite branches of DPS for the poor and disadvantaged. His vision to impart modern education in the schools like the Islamia Schools without disturbing the basic religious ethos will become the guiding spirit for other institutions of Muslims and perhaps a harbinger of modern education amongst them. He has also taken bold initiatives to introduce languages of different linguistic groups, like Urdu in the DPS curriculum.

Salman Khurshid plunged into politics as an heir to a political legacy but because he wanted to do that uniquely with a difference. He abhors the stereotype Muslim leader model, surviving on emotional sloganeering and pushing the community to political suicide. Nor does he see himself as a "secular leader" sadly cut off from the mainstream. The image of Salman Khurshid is of a national leader who is by faith a Muslim, whose family legacy points to the issues of Muslims, but who sees the solution to their grievances in educational advancement. He repudiates the thesis of their shedding their identity to prove their Indianness.

With very clear views about the Urdu speaking uneducated Muslims, Salman Khurshid took up the issue of Urdu as a means of imparting education maintaining all along that Urdu is the language of national integration. Abandoning Urdu means abandoning the history of five hundred years. History, even when we do not like it, is precious as a memory of a nation. Hence, he committed himself to the agenda of inclusion of Urdu in the secular education system. He has a clear understanding that Urdu can survive only if promoted at school level education. He believes that traditional discussions and debate on Urdu literature, culture and identity will be ineffective for the survival of Urdu language. Hence, the only way for Urdu is in reviving formal Urdu education in its own script. This will be the rallying slogan of the coming times and Salman Khurshid hopes to lead that movement.

Salman Khurshid has actively addressed many public concerns. He has devoted himself to the welfare of common masses and has opened various big and small educational institutions including schools, ITIs for girls, Computer Centres with Urdu DTP; an orthopedic hospital and other welfare projects such as water-management. His work has enthused the common people of Farrakhabad and the district is emerging as a model civil society.

Most recently he has planned a university for technical education of the minorities that will be set up in the vicinity of Lucknow. Initially an Engineering college will be established. This will be ready by 2004 and will eventually grow into a university. A College for Rural and Agriculture Engineering, School of Nursing, a Dental college and a Medical college will follow the Engineering College. For this purpose the Modern Education Foundation has been established which has purchased 200 acres of land near Lucknow.

The Modern Education Foundation also intends to establish a chain of English Medium High Schools and Senior Secondary Schools. The idea behind this is that in absence of such schools, aspiring Muslim students will not be able to cope with the modern competition. They need schooling of high quality that will enable them to compete with the best in the world. 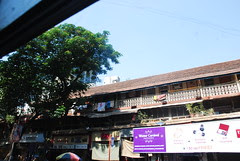 unable to add text title description , page does not load 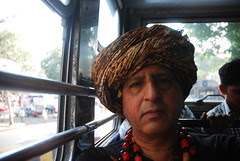 reliving dreams through blogs ..a very long journey, a photo by firoze shakir photographerno1 on Flickr.
By Firoze Shakir Photographer No1 - November 27, 2011 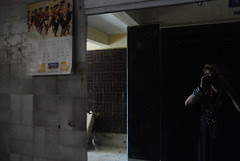 I get an error message , this has been happening since late last night,I could not reach out to Help by email as the page refused to load.. I hope the Flickr customer care reads this .. 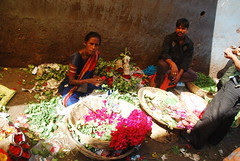 Gods Would Get Cold Feet Coming to This Filthy Market of Flowers, a photo by firoze shakir photographerno1 on Flickr.
By Firoze Shakir Photographer No1 - November 27, 2011 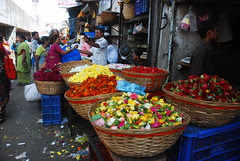 Google+Is a Spammers Paradise, a photo by firoze shakir photographerno1 on Flickr.
By Firoze Shakir Photographer No1 - November 27, 2011

I Think There is a Bug on my Flickr Photostream 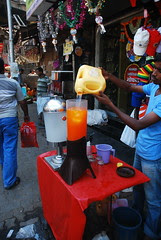 I Think There is a Bug on my Flickr Photostream, a photo by firoze shakir photographerno1 on Flickr.

And having a tough time since last night , trying to blog from here to my other sites .

Tears on the Soul of The Dadar Flower Market 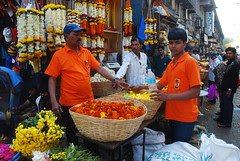 Tears on the Soul of The Dadar Flower Market, a photo by firoze shakir photographerno1 on Flickr.

This is the filthiest stretch of Mumbai,and politicians who talk of Marathi Manoos etc have done nothing to makes this place extending towards the Dadar over bridge that connects the West to the East a better cleaner place ..the most neglected place , like the Mahalaxmi Dhobi Ghat this too could be a tourist spot.. the Mahalaxmi Dhobi Ghat is an insult to humanity, a park should be built here with lots of elephants and a statue of Madam for her contribution , and that of the Bhaiiya community to the economy of Mumbai..

Flickr Spam Gets Worse And a Nightmare Called One Sided Contacts 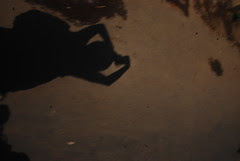 Flickr Spam Gets Worse And a Nightmare Called One Sided Contacts, a photo by firoze shakir photographerno1 on Flickr.


I am a married woman who trades nude photos of me and family and friends if you have any to trade of wives or women, especially older grandmothers but any girl is fine.
Nancy
ng1851@hotmail.com is my email

But for Flickr it is quantity counting of heads than quality that is of greater importance,I have a block list of over 766 people at Flickr simply because I refuse to add them , they have no profile details ,they have dirty pictures as favorites and I refuse to be part of their sexual preference..I shoot hijras transgender cross dressers as a photo journalist blogger but I am not part of their social group.

One of the reasons I migrated from Facebook to Google+ 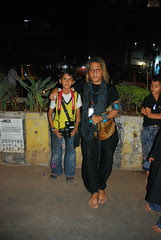 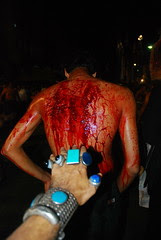