Muslims of the World Unite 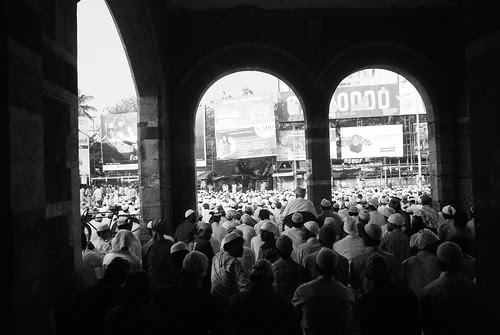 The Only Time When Newspapers Sell Like Hot Cakes 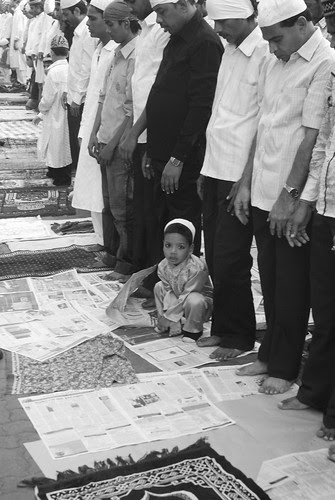 The Only Time When Newspapers Sell Like Hot Cakes, originally uploaded by firoze shakir photographerno1.

Last Idd there was a huge confusion at this road side namaz venue, justifiably so, people buy old newspaper sheets at Rs 2/ to place on the road to offer namaz , now sometimes the Mid Day Mate could be a bit distracting or added insult to the spirituality of the namazis mind, so somebody came out with rolls of brown paper sheets instead of newspapers ..but habits die hard this time the namazis had reverted to newspapers again..this is one time at Bandra Station newspapers sell like hotcakes.. 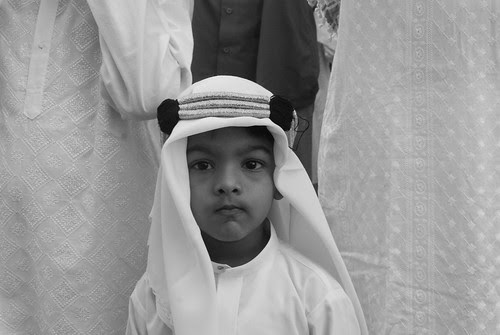 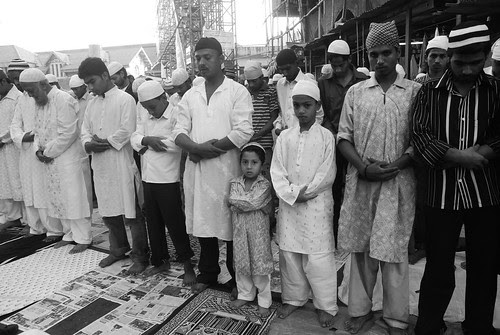 The Shias from Bandra area where I live go for namaz to the Bandra Khoja Shia Mosque , that is being duly expanded to accommodate the namazis..however it is the Sunni Bandra Station Road Namaz I shot, and love to shoot, it is spiritually exhilarating, and most of the people residing in my area pray here on both the Idds..

There are other places to like the Noorani Mosque and the adjacent areas, Almeida Park, Badi Masjid including a Sunni mosque near the main Bandra Bazar.

Close to the Noorani Mosque the very poor pool in and slaughter a bull, much cheaper than a goat, a goat is not less than Rs 4000 ..the lamb is a bit cheaper I am told but the meat is tasteless..

I shot the bull slaughter but only a few frames after it had been bought down, next year perhaps..I shot this at the Compound too..I was late for the main procedure..

At our house , we dont cook the goat we have slaughtered on the main Idd day as my kids and their wives prefer Chicken Biryani , and by late evening it is all over..the meat we distribute among a few friends.

This was the first time I did not send the biryani to my friends as Marziya was not keeping well, running cold fever..we were all concerned about her.. she is getting better though..

My uploading is slow on my sons comp , 6 pictures each 4 MB have taken over 8 hours..I had a message in my Flickr inbox, I share with all of you from a dear American friend regarding my Internet woes..

You've been sent a Flickr Mail from Stephen J. Alexander:

I think bad service from telecoms is a universal constant -
if it's any consolation it's pretty horrible here, too

From Dubai With Love 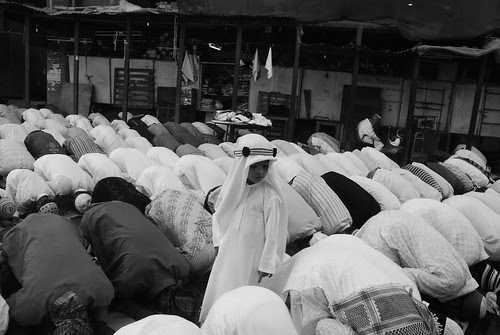 From Dubai With Love, originally uploaded by firoze shakir photographerno1. 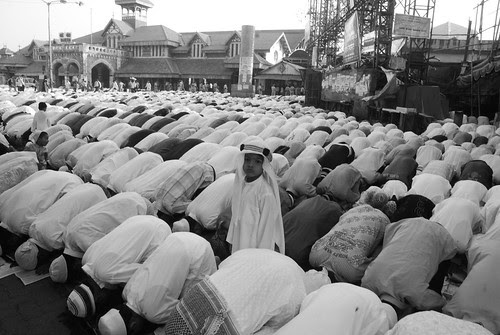 I was late for the Bakra Idd Namaz and here as I reached the Bandra Station Sunni Mosque barefeet I spotted this young boy, and I was lucky I was the only one shooting him, most of the so called photo journalists were busy capturing the Mansuri kids further ahead..

Kid who are cutely dressed by the fathers vying to be in the newspapers along with the kids , and after the namaz ends its the beginning and no end for kids Idd hugging pictures , I shoot this too including the journos in my frame..

After the namaz I shot a pathetic beggar lady in a hijab and in great pain, from here I rushed to Ebus goat shop shot some more Qurbani pictures , and cutting across Indira Nagar came to a scene, that hit me hard..
At Bandra Bazar Road there was a friendly goat called Jimbu without horns brown and white, he loved kids , he was Marziyas favorite, he was to be slaughtered last year but missed the razors edge, this year he was not lucky, or perhaps he was lucky, he was slaughtered with divine respect and after his head was slit he still remained alive , kids weepy eyed..this is sacrifice, you nurture a goat like your child than hand him to the bounty of God..like Abraham offered Ishmael..

So this Bakra Idd shot by the barefeet blogger of Mumbai..this Namaz set is my new offering at Flickr.. 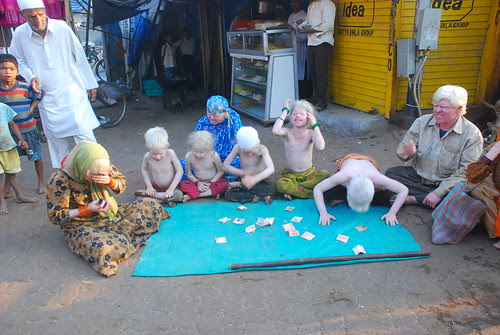 I had shot them at Haji Malang during the Urus - this albino family, and on Idd day while rushing to shoot the Idd Bandra Station namaz I spotted them at JJ Colony, they were wondering about me, barefeet , dressed in orange garb, I was desperately late for the Namaz , I paid them generously shot a few frames..they cannot stand the rays of the sun..for me this is the prologue to pain before man bows his head towards the Almighty..

I came back from the Namaz shot some Qurbani stuff than since yesterday my net was dead , my pictures I could not upload..I shot beggar women in hijab and with the power of my mind embedded in my camera , you can see her face and her pain..this is the flip side of festivity..Amiron ki Idd Saal main Ek Bar Gharibon ki Idd ek din main bar bar...

I am making another set for the Idd pictures here at Flickr..I shot in color but because my net was dead ..discolored them as black and whites..

This morning I shot the slaughter of the bull - at the Bandra compound and at a slum at Noorani Mosque..

I am posting this from my sons comp..

To The Gen.Manager You Telecom Mumbai 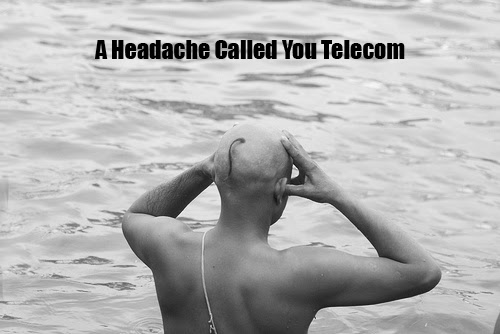 To The Gen.Manager You Telecom Mumbai, originally uploaded by firoze shakir photographerno1.


Your Service is the Worst - You Telecom Tortures

To The General Manager
You Telecom

I am posting this from my sons computer as my internet connection has been dead since two days, innumerable calls
to your inefficient customer care , including two supervisors and my net connection has not been restored.

Your technicians know nothing one came last evening erased the IP code while checking the modem
and another came this evening while I was away at work and my connection is dead.

I am an existing client since the nightmares of Iqara and now You Telecom . I have nothing against you Telecom, I pay my dues on time , but when I am harassed I post my pain all over the internet as a photo journalist and as an International blogger..I shot Idd pictures and am unable to post them, last evening I was at a cyber cafe because someone cuts the wires , is that my fault, why dont you get you infrastructural act together..your guys have also messed up my building with wires ..that are nothing but sheer ugliness..why dont you take the required permission before you run wires on somebody's building..

Who will compensate me for the pain and the torture ..yes your Customer Care Sucks to the bone and this is Truth..

I have bought my problems by several messages to Mr Ganesh Pujari since yesterday and Mr Arif since tonight , who tried to help from his end but could not restore my internet connection..we will opt for other service providers if this persists..we have three connections at our house..

As Ever Firoze Shakir