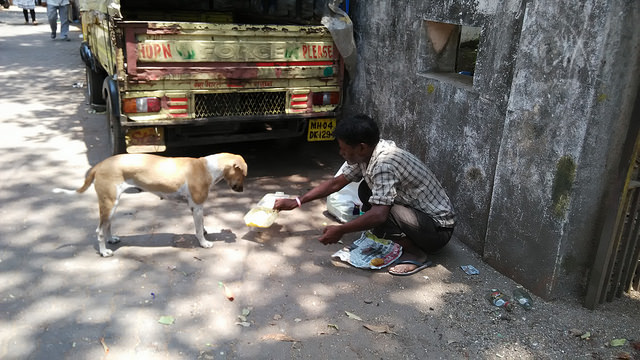 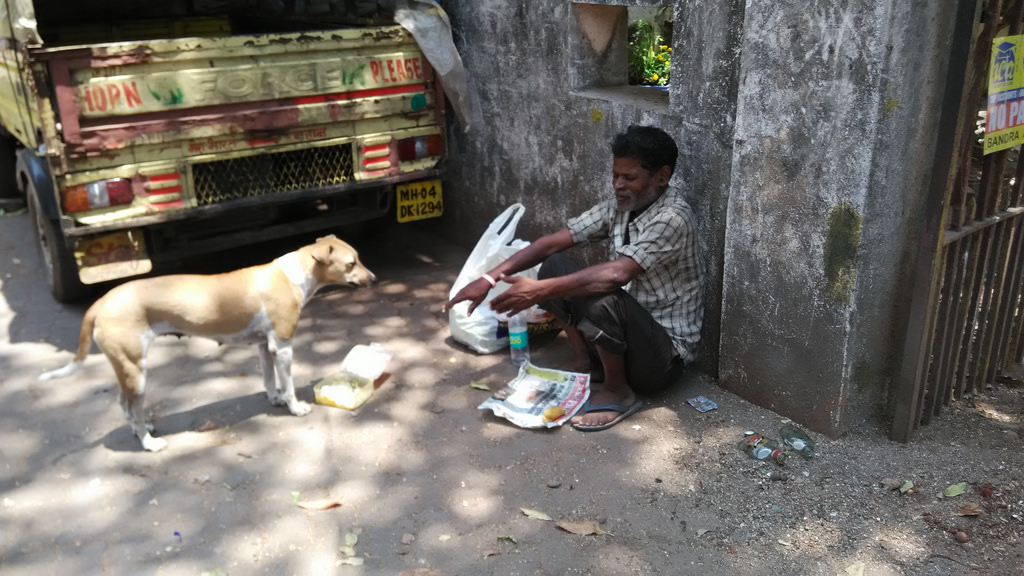 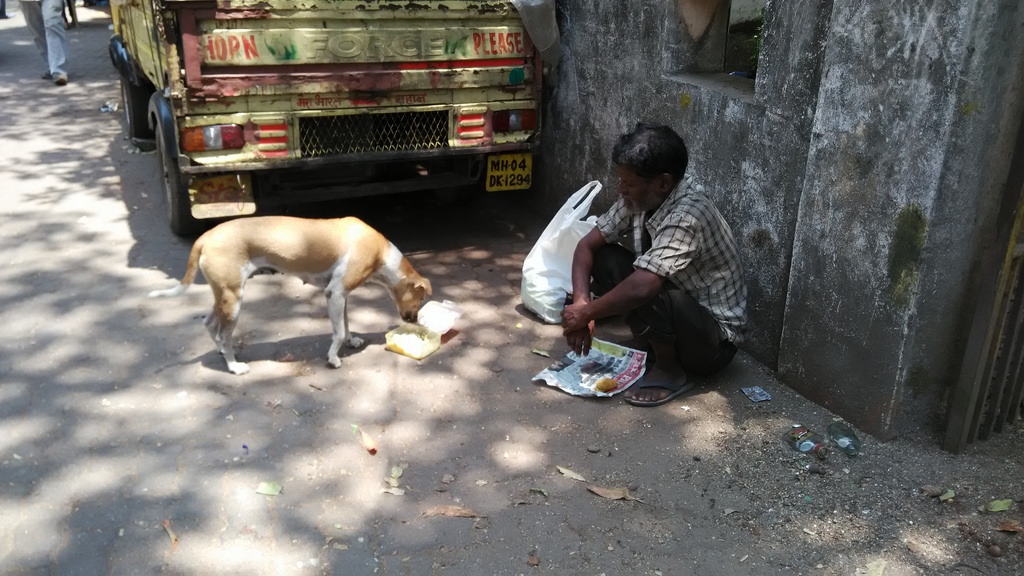 And the dog was asking him dude why are you not eating..it was an accidental meeting . a stray hungry dog seeing the hungry man giving him  his lunch felt it was cheating,,,a cosmic moment where now the dog was entreating ,, please eat your food ..at a moment retreating..a dog who was used to every mans beating....

Email ThisBlogThis!Share to TwitterShare to FacebookShare to Pinterest
Labels: In India Its Only The Poor Man Who Has A Very Big Heart 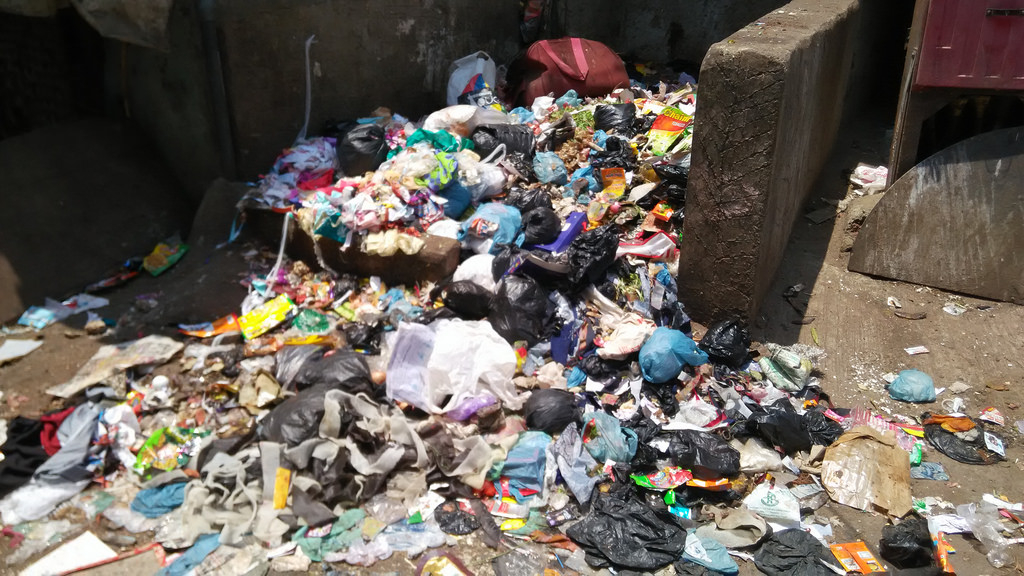 Believe me I have shot so much of garbage and much before Modiji gave his clarion call for Swach Bharat Clean India .

And I have an entire set at Flickr documenting the horrible horrendous garbage sites in Bandra one close to my home and also as close to our Local MLA s house .And despite BJP winning both the seats from Bandra the situation of garbage management is on the backfoot ,, Nobody cares but I know for a fact if any of the Big Bosses of BJP were to arrive in my area this place would look pristine and unbelievably Garbage Free .

Well I digress but this garbage site is in Bandra Slaughter House slum this small space under a staircase for all the slum pockets in this area , there is a very big one outside the NCP office too on the road from Shastri Nagar slums .

Mostly Muslim area like this the garbage is never picked up and I have seen concerned people paying the sweepers to clean it ,,and it is the same at other Muslim slums in my area too Indraji Nagar etc

Now you will never see this kind of display at Joggers Park, Carter Road BandStand where the two Bollywood Icons stay you wont see this even at Pali where Mr Rishi Kapoor stays , they wont allow this to ever happen as they love Pali Hill and have nurtured it for long .. And you wont see this at Turner Road so why such an anomaly in garbage removal..

One thing is sure with so many of our politicians going on junkets to learn something from other countries they learnt nothing about garbage disposable beats me ,, could they not hire a CEO from Singapore

Mumbai needs people that love Mumbai not people who want to destroy Mumbai ,,. The Politicians The BMC and above all the residents are to blame .. if there was a CCTV at these garbage sites , it would be the first item to be stolen you can be sure ..

The BMC Beat Marshalls were badly outsourced , uneducated uncouth , and nothing less than extortionist .. you need an event management company to gt rid of garbage as an eyesore in Mumbai.. and this is our legacy of garbage that we will one day give to our generation next..

The Muslim Man In The Slums 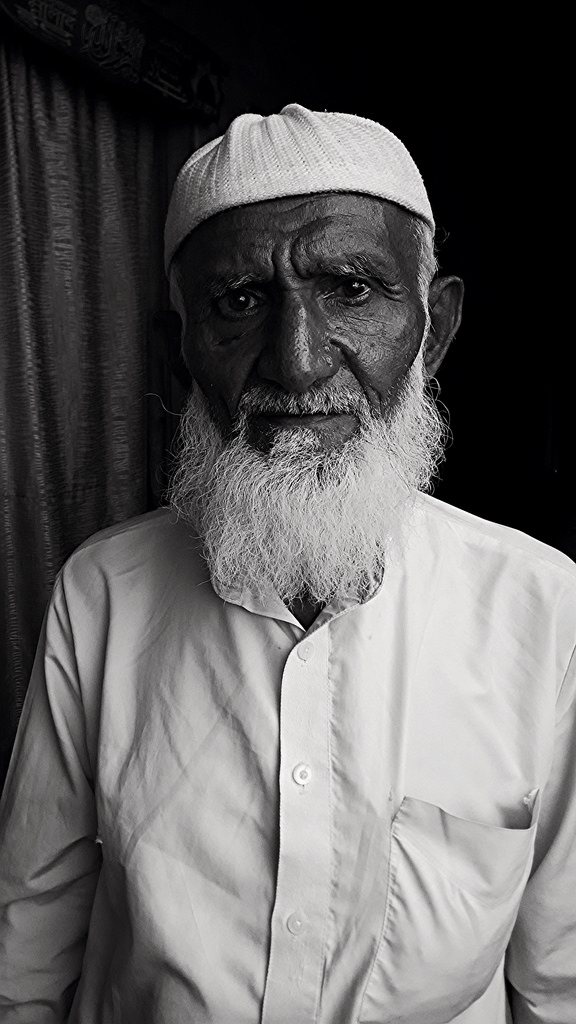 I shoot him whenever I come to the slums for work and he gets confused seeing me shoot with my mobile phone instead of my DSLR camera , not that he knows what a DSLR is but he thinks I am not serious when I shoot him on mobile ..and I like his face , his demeanor and I had not seen him on my few visits , maybe because I come in the evenings  normally ,, this was in the daytime ..at the Bandra Slaughter slums they know me because of my cameo role in a film Phata Poster Nikla Hero as a photographer but here in the slums they like the Hero of the film Shahid Kapoor and that I was in a few frames is a big thing for them  , but they wonder why I walk into the slums I mean I dont have a car or bike , they know why I come here ,,

Than little kids stand and pose they want to be shot and this a bustling slums with a lot of workshops manufacturing units ,,and I have bought most of my Flickr photographer friends here like Boaz ..and they like foreigners shooting them ,,

One of the exits of this slum leads to the Shastri Nagar Slums of Bandra on the tracks and to the Bandra Station.. This Slaughter House slums was once where the butchers stayed and the abattoir was situated here till it was moved to Deonar

Most of the beef stalls have been taken over by the Mutton butchers ..I used to once before the Ban buy Beef Heart for my Flowerhorns ,, now it is Bloodworms and pellets .

Email ThisBlogThis!Share to TwitterShare to FacebookShare to Pinterest
Labels: The Muslim Man In The Slums

The Muslim Beggar In The Slums 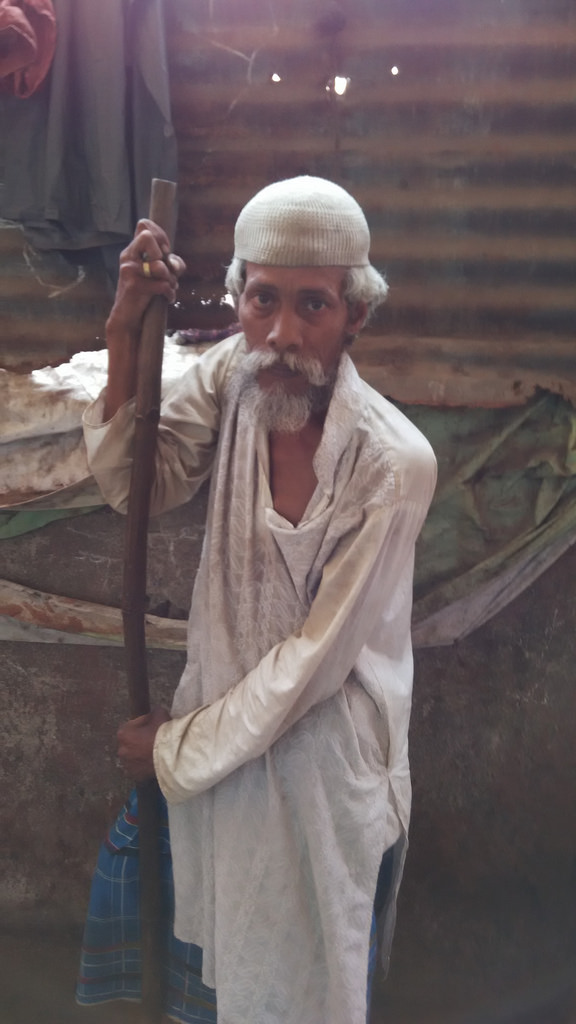 I shot him in the daytime at Bandra Slaughter House slums , he limps from lane to lane begging for alms ..and people are more generous in the slums they offer him food , money and are happy that he blesses them.

Mostly in rich neighborhoods hardly anyone cares for beggars , most people see beggars as nuisance if they give a few coins it mostly to get rid of them..

Whats his name , where does he stay , how did he become a beggar ,, well all that  does not matter Mumbai folks have no time for all this and in more ways than one the average Mumbai resident lacks compassion..and with his looks body language you know he is a Muslim beggar , he is the lowest of the low the Untouchable among Muslims ,, Is he a Sunni or a Shia ,, does not matter ..you know he is not a Bohra or a Wahabbi .. he is simply a Muslim beggar .

Is he a drinker , drugaddict , quite possible as you see most of them begging at street corners ..with a Muslim skull cap..

I hope someone does a thesis on beggars , the different kinds of beggars the different kinds of begging.. the only time our politicians become beggars is when they come with folded hands for our precious votes , pat our children s head , but you will never see one of them give a chocolate bar to our child ,, that fake pretentious smile , the armed bodyguards and the few chamchas of the politicians that live in our area..After they win the elections than its time for the people who voted for the politician to become beggars ,, Mr Politician lives round the corner , but you cant meet him , you are driven away by his driver his point men and his cops ,, and this is Indians politics ,, in alignment with beggary ,,Is there a beggar mafia yes .. everyone knows it but fuck who cares ,, a huge business in supply and demand and the cripple lame blind little kids  a part of this flourishing business .

And so with my mobile phone in hand I shoot beggars ,show you that part of citylife you will never see or bother to shoot ,,and there are beggars all over India .. at every railway station , at every temple mosque church and religious shrines ..

I mostly prefer to remain silent  on my beggar pictures unless God lends me a poem , but how long can I remain silent ,, I know almost all the beggars in Bandra ..and its not just because I shoot them but the ones I know I ask about them sometimes give them money for medicines food etc ..

And very soon most of the hardcore beggars will change gears and will travel without tickets to the Land of Hope For Beggars Ajmer Sharif... if I reach Ajmer it is always a miracle as I too am waiting for Acche Din and 15 lacs in my bank account ,, but if I get it one day it will go to pay off my home loan..

Email ThisBlogThis!Share to TwitterShare to FacebookShare to Pinterest
Labels: The Muslim Beggar In The Slums

The Muslim Beggar In The Slums

Email ThisBlogThis!Share to TwitterShare to FacebookShare to Pinterest
Labels: The Muslim Beggar In The Slums 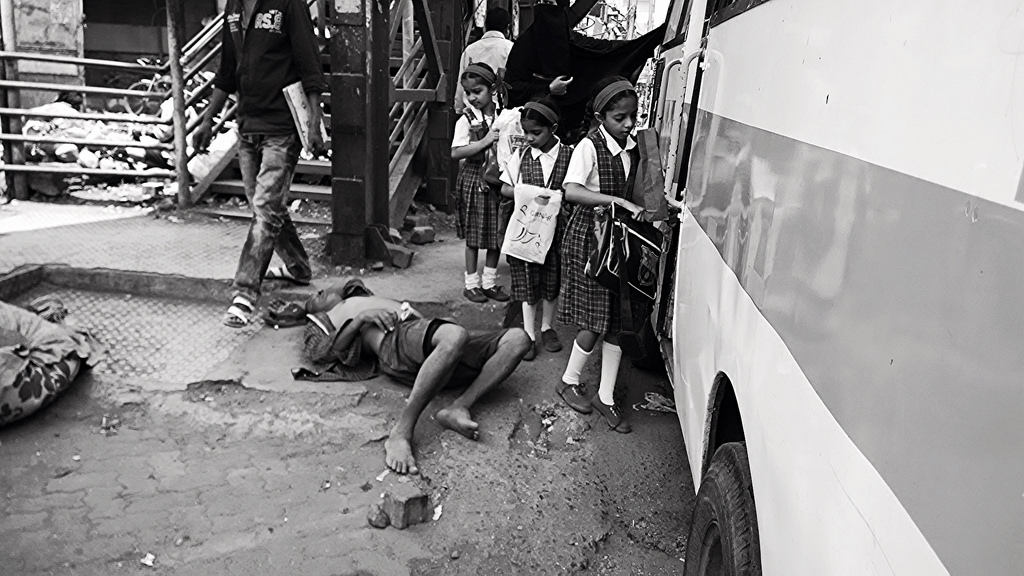 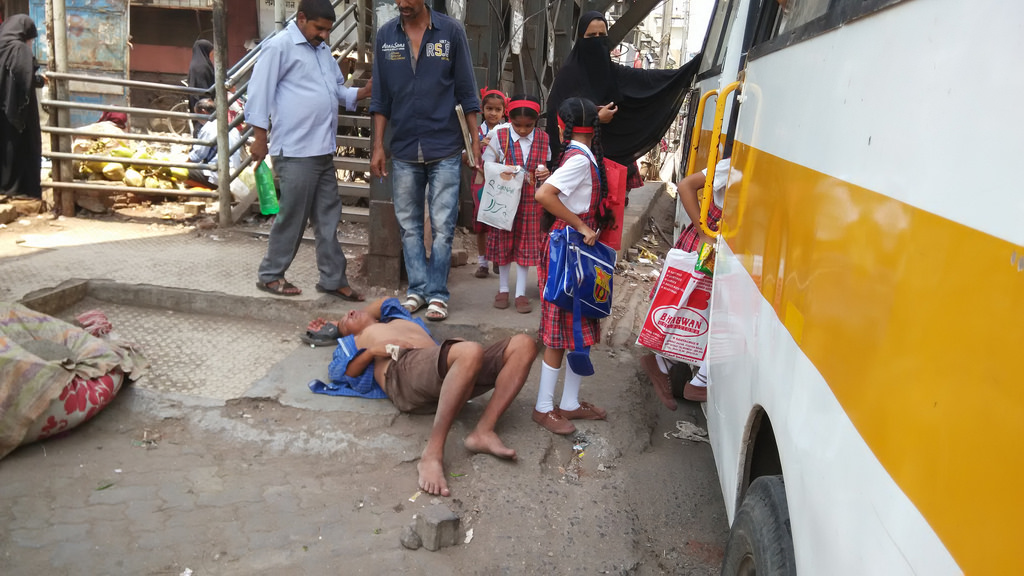