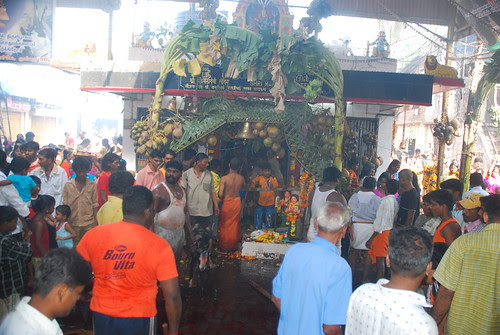 Yes I am Human.., originally uploaded by firoze shakir photographerno1.

I appreciate all your comments on this Maryamma 2009 set at Flickr of over 450 images shot in 2 hours, , and after I have posted all this , I shall lock up the comment box, not because I dont like your comments , I do it simply because I know some people may find this injurious to their sensibilities, to their faith.

I shot this as a pictorial subject and I cannot be prejudgemental to somebody's culture or rituals that are part of their spiritual ancestry..and spiritual heritage.

This is sacrifice but differs from the Muslim Qurbani, this is in answer to a comment earlier..the Muslim Qurbani or sacrifice is performed keeping a tenet called Halal..the animal neck is cut with compassion.. only such meat is edible for Muslims or else it is considered Haram, in local lingo it called Jhatka which is not allowed in Islam.

But as a photographer I shot truthfully, I have a great respect for the Tamil Hindu community, I have made some great friends ,I am in gratitude for the hospitality shown to me, I shoot pain as I see it on the viewfinder of my soul..I love shooting blood and gore, which are part of the earliest rituals, that have tempered down over the ages..
As a Shia Muslim from Mumbai ,just to experience the angst and spirituality of this community I might pierce my cheeks with a 18 feet rod ..I know it will be painful, I might not be able to shoot pictures with the rod in my mouth , but I shall give it a try..dying has never bothered me I have seen Death face to face many times and he just brushed past ..no my turn had not come as yet..when it does I will be thankful that my term on Earth is over..

This is where the photographer and the blogger in me takes a back seat, I will become Human..and seek my personal Nirvana through the cosmic consciousness of my mind..

I shot a young kid at Juhu Beach last evening with a rod between his cheeks , he was watching me shooting his picture , nonchalantly , I searched for myself in his eyes that were like ponds and I saw myself resurfacing as a better man..he in my eyes became the Father of Man and I became a little Child.

He was at home with the integrity of his Faith..he had found Truth without having to struggle hard like me , I who flitted like a butterfly from the Holy Koran, to Bible to the Ramayana and the Mahabharta and finally reached a home truth that took 55 years..what can we be if we cannot be human.

More important than just being a good Hindu or a good Muslim if every community promotes the essence of good humanity without religious bigotry and prejudice that exists in Christians too..this world would be the next alternative to Paradise.

But we have destroyed this planet with our self centered religious idolatry..

I am not an atheist nor can I be an agnostic..but yes I am human..

I trust in God as he placed a trust in me..

I am happy with the message of Shiasm given to me as a pledge in my mothers womb..