Police Dadagiri Needs To Be Stopped 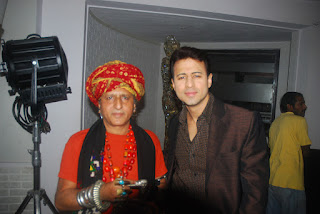 I have known Mr Aryan Vaid for many years now , I have worked with him on the sets of Mr Ashok Tyagi jis Riyasat last film of Mr Rajesh Khanna .Mr Aryan Vaid , is an exemplary human-being , polished sensitive cultured , one thing I know about him , he does not give in to people if he is right ,, whosoever it maybe ,, I have visited his house a great host and I must reiterate he has absolutely no Bollywood attitude , so when I read this mornings HT news of him being bullied by a traffic cop for breathe inhaler test I was shocked , I mean our cops are so dumb that they cannot recognize a sober person from a vulgar drunken one ,, and sadly an upright officer our erstwhile CP Mr Rakesh Maria must get rid of such elements in the force , everyday media writes about the rotten bad apples and our CM also our Home Minister for State needs to bring the House of the Mumbai Police in order , I have seen many a times Traffic cops using abusive language , extorting ricksa drivers , and the Traffic cops stand hidden in street corners only to bully intimidate I have seen them taking bribes as low as Rs 30.. I mean we all know it but when will all this stop , most of the cops the good the bad or the ugly are stressed , bad long hours no rest no vacation and no futuristic police reforms ,, so you have cops shooting their seniors , seniors abusing the juniors , and some rogue cop are at times worse than the most hardened criminals ,, Who will join the erstwhile police force if this is the example they set.. as a senior concerned citizen with the highest regard for our selfless cops I am really shattered with what is happening .. I think there was one tough cop Mr Arup Patnaik we need more cops with balls like him.
Sorry Mr Aryan Vaid ,, you were lucky well connected to the Media Press what happens to the common man if he was in your place ,, I dread to think about it , insulted humiliated even if he is with his wife and family , and they want to have a night life extended in Mumbai ,,, Dear Mr Aditya Thackeray sab what do you say to this .. you are the future of our politics in Mumbai erudite well educated how long will this continue ,, please dont let the spirit of Mumbai die because of a few cops that are giving this city a very bad name 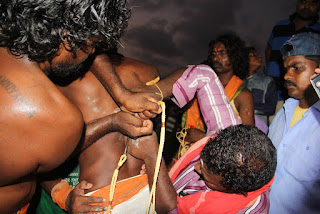 My fascination for rituals , overcoming pain , is intense , not merely as a curiosity , but as a spiritual factor in the communities I shoot , and here the hook is inserted in the back,.It seems very easy , but it is the most painful procedure , to ease the pain that will follow a man holds the devotee tightly , a lime is placed in the mouth of the devotee to bit in if the pain increases ..
Shanmugham my Tamil friend is an expert , he does it with precision , and he is huge tough , but at times inserting the hook requires 4 to 5 people pushing it in , as my video shows , here while pushing the second hook in the back, it broke , and now they had to pull it out , the mans back began to bleed , so they decided they will put the second new hook again after the pain subsided .
This is the Magic of India , and this is the genre that I enjoy to shoot as a street photographer , I wear a blindfold I am not interested in dogma , or why they are doing it , it is their faith belief culture ,I shoot it clinically , quietly , as I have shot people of my own faith cutting their heads with swords daggers and overcoming pain for their Imam..If I had money I would go to shoot the 14 Stations of the Cross in Philippines where they actually nail the man to the cross I envied a Spanish couple who had shot this and dressed in black accompanied by my dear friend Ladha Ali they shoot the Chehlum in Hussain Tekri Jaorah..
And I never ever forgot them,,,I have taken my foreigner friends to shoot the Marriammen Festival at Mahim Maccchimar Colony , and several foreigner friends to shoot Moharam wherever I went ,, I wanted them to see that spiritual facet of Unseen India and showcase it better than me ..I am overwhelmed by the people I shoot , More important than my photography, is the people I shoot , without ridiculing or making fun of the people I shoot , I moderate my vision try not to hurt people but they do get upset specially if it is my head bleeding ,,,or a child s head bleeding I dont glorify blood , but than every drop speaks out vehemently against the oppressors of Islam.. and Oppression in Islam will never End ,, it is the History of Islam.. and Karbala keeps repeating itself all wherever the Shias and other minorities are persecuted ..
The Tamil Hindus dont have this belief in their rituals ,, this is their way of appeasing liberating the flesh from the soul ,,, to Mother Marriammen.
I have decided and I did tell Shanmugham that one-day I will pierce my cheeks with with an 18 feet rod and it has nothing to do with Religion but to show my solidarity as one Indian to another ,,, and I still wont ever forget my Hindu friend who cuts his back for Imam Hussain and all my Hindu Blogs over 61000 are dedicated to his mother ,, A Shia from another time and place may not understand this , luckily my parents were not bigots and this is India ,, of Peace Hope Humanity .. tolerance and Hindu Muslim Christian amity in Mumbai... This is the power of religious faith that binds is what I shoot , the humility and hospitality of my India ,,
And I am lucky for once that my grandmother , or my family did not take the Train to Pakistan like the rest of my mothers relatives ... Need I say More ,,Muslims sadly will keep on killing Muslims till Armageddon,... is what hurts as a humanbeing more than anything..Some only kill all ethnicity for the pleasure of killing and Misplaced Jehad .. I will die if I post a GIF ..or a picture from another mans timeline ,, I shoot Original Content ,,
And so I shoot my countrys religions ethos my cultural inheritance .. without profit or gain without fucked watermark.. sometimes I wonder what you steal from me does not even belong to me ,,Even I dont belong to myself.
So mind you this is a blog .. resurfacing in all its raw wildness through a picture a moment I shot and now you know why I stay a million miles away from Indian camera clubs ,, Yes Fuck F Stops
Lastly the 4 Sunni youth who went to fight for ISIS , brainwashed radicalized , would they ever show the same intensity fervor ,would they give up everything to go fight for their own Country ,, Fuck Never ..So when Midday and the newspapers glorify them I puke all over my shirt front and this is about these youth and not about the Sunni faith ,,I have the highest respect for all Faith but not for motherfuckers who betray their country with misplaced zeal and give excuses , I am sure they went there to kill Shias Yezdis Armenians and to rape rob murder and not simply to play marbles ..
https://www.youtube.com/watch?v=Z9cNsGHNtmg&feature=youtu.be" rel="nofollow">www.youtube.com/watch?v=Z9cNsGHNtmg&feature=youtu.be
By Firoze Shakir Photographer No1 - June 02, 2015

The Common Man And Me 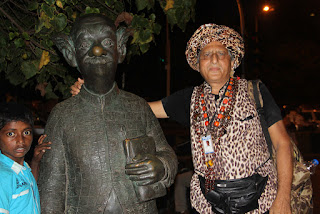 he looked hassled
overwrought i could
see his commonness
snatched away by a
conniving political
party, a simple man
they pushed a broom
in his hand making
him clean every
street every gully
his pristine soul
politicizing garbage
they sullied .. those
that want to build
houses for god
statues in the sea
but nothing for the
poor the homeless
gone to seed ..
politics of lust
power greed

more than crooked  politicians its good human cartoonists that we need

Email ThisBlogThis!Share to TwitterShare to FacebookShare to Pinterest
Labels: The Common Man And Me