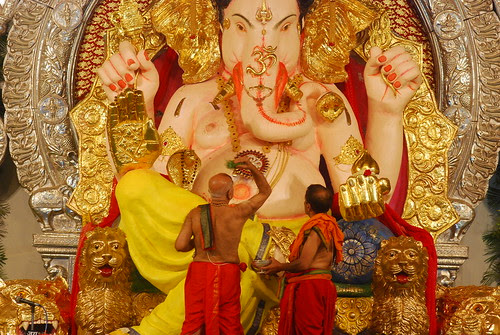 I have shot over 700 pictures of this series but had to keep them on hold as I had to post the back log , and so today I have decided to upload all the pictures.
The GSB Ganesha was immersed last evening and once again I thanked Dr BU Pai for his kind invitation allowing me shoot the Lord and share his bounty with all of you.

“Oh! Lord (Ganesha), of huge body and curved elephant trunk, whose brilliance is equal to billions of suns, always remove all obstacles from my endeavors.”

“Salutations to Lord Ganesha who has an elephant head, who is attended by the band of his followers, who eats his favorite wood-apple and rose-apple fruits, who is the son of Goddess Uma, who is the cause of destruction of all sorrow. And I salute to his feet which are like lotus.”

No obstacles will come in the way of one who reads or listens to these 12 names of Lord Ganesha at the beginning of education, at the time of marriage, while entering or exiting anything, during a battle or calamity.

“In order to remove all obstacles, one should meditate on (the Lord Ganesha) as wearing a white garment, as having the complexion like the moon, and having four arms and a pleasant countenance.”

“Oh God who has the mouse as his vehicle, and the sweet modhaka (rice ball) in your hand, whose ears are wide like fans, wearing the sacred thread. Oh son of Lord Shiva who is of short stature and who removes all obstacles, Lord Vinayaka, I bow at your feet.” 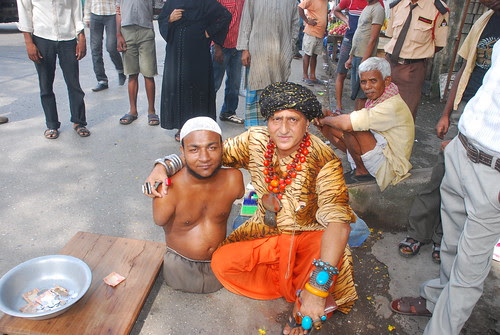 Appu and Me, originally uploaded by firoze shakir photographerno1.

There was nobody around that looked the type who would shoot me and Appu, this was shot by a coconut vendor, I told him to take two frames just in case..

He has never held a camera in his hand but he is as fond of Appu as you and me..I did tell him you were coming to Mumbai in Dec or Jan.. that pleased him a lot..

So Glenn finding Appu at Mahim was a great moment of joy.. and these pictures are all dedicated to you..they ae all shot rapidly without composing or without coming close, Appu has a handler who felt that I was being a nuisance - rightly so, this is business hours for Appu The handler was not rude but pragmatic as a large crowd makes traffic snarls and then the cops come in and he might lose this space , begging space tooo comes at a premium at St Michael Church Mahim, they have to pay hafta or protection money to the local goon as well as the system.

Its the first time Appu told me he was an Assamese .. dont broach him with questions I dont ask him personal details but somebody should do a documentary on him..and pay him too..

Money is important to Appu..he has sisters and a family a mother too.

So Appu is a Muslim trying to touch the Soul of Jesus Christ at St Micheal Church, he does touch the good people that come here for Novena on Wednesday.

And Appu was fasting to like a good Muslim.. 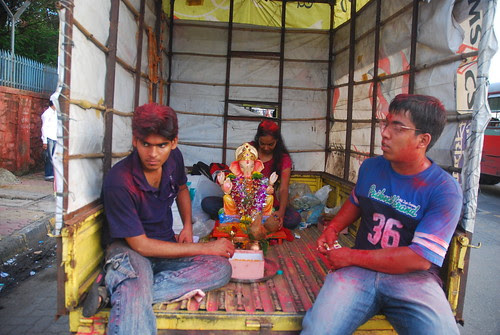 This was shot at Bandra Reclamation as Lord Ganesha moved back to his home in the seas..this was the 5 day Immersion heading towards Mahim Beach/

Very fondly they bid him farewell, he was the heart ans soul of their existence, he was a guest of honor, and there is sadness too in the household as they see him go..but than there is a solace too in the oft repeated words ..Ganpati Bappa Morya Purcha Varshi Laokar Ya..Come Soon Next Year Lord Ganesha 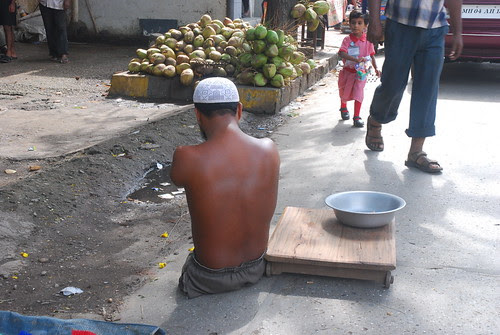 Appu My Friend is Back !!!!!!!!!!!, originally uploaded by firoze shakir photographerno1.

I was going to town with my wife , but something told me that I would meet Appu , I asked my wife to keep an eye on the road close to St Michaels Church Mahim where Appu sits on Wednesdays - the day of the Novena .

I have a poor eyesight because of my diabetes wife spotted him , as this place is jam packed on Wednesdays no parking etc I told my wife to wait for me ahead as I got off the cab to meet Appu after several months..

He was excited seeing me , and a huge crowd collects within seconds of my arrival..and this is how I saw him before he saw me..

I have till date never asked him personal question , he told me he was Gauwahati in Assam.

He had lost my visiting card , I gave him another including whatever few notes I had in my wallet - for me and Dr Glenn Losack MD ,Appu ,is not a beggar , but we are bigger beggars than him , begging for happiness that eludes us..

Appu is happy contented , he is positive always smiling , and we get along like water on ice, we chat , the people around more astounded at our conversation.

You must forgive me I am uploading 3 sets on Flickr simultaneously, I dont know what to post what to hold back, I have over 700 pictures of GSB Ganesha to post, and a lot of stuff pertaining to Ganesh Pandals and the streets.

I am not in a good frame of mind ..so Appu was a beacon of light in my dark hours and grim moodiness.
I left him to catch up with my wife we had urgent work in town , on my way back at 6 pm I again got of the cab for good, telling my wife I would reach home in time for breaking my fast.

I shot more pictures of Appu , yes he was feeling nostalgic of meeting the furious physician in Dec or Jan.

This post is dedicated to my dearest brother Glenn Losack..MD
Mind Doctor

When I sent a message to Glenn this morning that I had a surprise for him , he wrote back you found Appu ..

From here I walked home to Bandra shooting the golden dust of the road.. that they call street photography.. 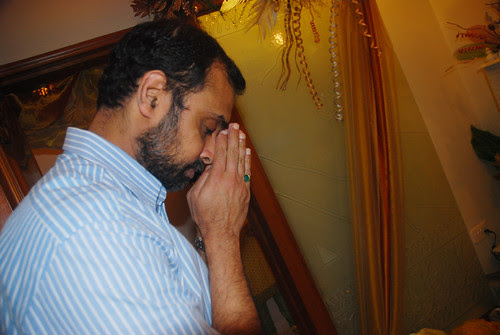