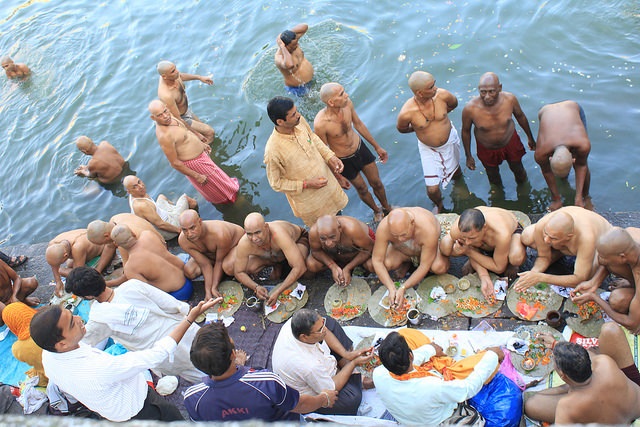 Pitru Paksha is considered by Hindus to be inauspicious, given the death rite performed during the ceremony, known as Shraddha or tarpan. In southern and western India, it falls in the Hindu lunar month of Bhadrapada (September–October), beginning with the full moon day (Purnima) that occurs immediately after the Ganesh festival and ending with the new moon day known as Sarvapitri amavasya, Mahalaya amavasya or simply Mahalaya. The autumnal equinox falls within this period, i.e. the Sun transitions from the northern to the southern hemisphere during this period. In North India and Nepal, this period corresponds to the dark fortnight of the month Ashvin, instead of Bhadrapada.


According to Hinduism, the souls of three preceding generations of one's ancestor reside in Pitru–loka, a realm between heaven and earth. This realm is governed by Yama, the god of death, who takes the soul of a dying man from earth to Pitru–loka. When a person of the next generation dies, the first generation shifts to heaven and unites with God, so Shraddha offerings are not given. Thus, only the three generations in Pitru–loka are given Shraddha rites, in which Yama plays a significant role.[4] According to the sacred Hindu epics (Itihasa), at the beginning of Pitru Paksha, the sun enters the zodiac sign of Libra (Thula). Coinciding with this moment, it is believed that the spirits leave Pitru–loka and reside in their descendants' homes for a month until the sun enters the next zodiac—Scorpio (Vrichchhika)—and there is a full moon. Hindus are expected to propitiate the ancestors in the first half, during the dark fortnight.[2][5]

When Karna, the brave warrior whose acts of giving are legendary even today, died in the epic Mahabharata war, his soul transcended to heaven, where he was offered gold and jewels as food. However, Karna needed real food to eat and asked Indra, the lord of heaven, the reason for serving gold as food. Indra told Karna that he had donated gold all his life, but had never donated food to his ancestors in Shraddha. Karna said that since he was unaware of his ancestors, he never donated anything in their memory. To make amends, Karna was permitted to return to earth for a 15–day period, so that he could perform Shraddha and donate food and water in their memory. This period is now known as Pitru Paksha.[6] In some legends, Yama replaces Indra.[7]

Significance[edit]
Tarpan is being done at the Jagannath Ghat, Kolkata.
The Tarpan (Offering holy water to the manes) is being done at the Jagannath Ghat, Kolkata, at end of the Pitru Paksha.
Annadaana ("Donation of food") is a central part of the rituals during these 16 days. On all these days, offerings are made to the departed, including those whose names or manner of death are not known. On these days tarpan, shraaddha and pinda daan are performed daily according to the procedures under the guidance of a priest. Although these rites are to be carried out daily in this fortnight, it is considered that to perform them on the last day i.e. on Mahalaya Amavasya |(or "Sarva Pitru Amavasya") is extremely important and sacred. The performance of Shraddha by a son during Pitru Paksha is regarded as compulsory by Hindus, to ensure that the soul of the ancestor goes to heaven. In this context, the scripture Garuda Purana says, "there is no salvation for a man without a son".[4] The scriptures preach that a householder should propitiate ancestors (Pitris), along with the gods (devas), ghosts (bhutas) and guests.[1] The scripture Markandeya Purana says that if the ancestors are content with the shraddhas, they will bestow health, wealth, knowledge and longevity, and ultimately heaven and salvation (moksha) upon the performer.[2]

The performance of Sarvapitri amavasya rites can also compensate a forgotten or neglected annual Shraddha ceremony, which should ideally coincide with the death anniversary of the deceased. According to Sharma, the ceremony is central to the concept of lineages. Shraddha involves oblations to three preceding generations—by reciting their names—as well as to the mythical lineage ancestor (gotra). A person thus gets to know the names of six generations (three preceding generation, his own and two succeeding generations—his sons and grandsons) in his life, reaffirming lineage ties.[1] Anthropologist Usha Menon of Drexel University presents a similar idea—that Pitru Paksha emphasises the fact that the ancestors and the current generation and their next unborn generation are connected by blood ties. The current generation repays their debt to the ancestors in the Pitru Paksha. This debt is considered of utmost importance along with a person's debt to his gurus and his parents.[8]

Rules of Shraddha[edit]
When and where[edit]
The shraddha is performed on the specific lunar day during the Pitru Paksha, when the ancestor—usually a parent or paternal grandparent—died. There are exceptions to the lunar day rule; special days are allotted for people who died in a particular manner or had a certain status in life. Chautha Bharani and Bharani Panchami, the fourth and fifth lunar day respectively, are allocated for people deceased in the past year. Avidhava navami ("Unwidowed ninth"), the ninth lunar day, is for married women who died before their husband. Widowers invite Brahmin women as guests for their wife's shraddha. The twelfth lunar day is for children and ascetics who had renounced the worldly pleasures. The fourteenth day is known as Ghata chaturdashi or Ghayala chaturdashi, and is reserved for those people killed by arms, in war or suffered a violent death.[2][4]


Mahalaya marks the formal beginning of the Durga Puja festival
Sarvapitri amavasya (all fathers' new moon day) is intended for all ancestors, irrespective of the lunar day they died. It is the most important day of the Pitru Paksha.[2][4] Those who have forgotten to perform shraddha can do so on this day. A shraddha ritual performed on this day is considered as fruitful as one conducted in the holy city of Gaya, which is seen as a special place to perform the rite, and hosts a fair during the Pitru Paksha period.[3] In Bengal, Mahalaya (Bengali: মহালয়া) marks the beginning of Durga Puja festivities. Mahalaya is the day when the goddess Durga is believed to have descended to Earth. Bengali people traditionally wake up early in the morning on Mahalaya to recite hymns from the Devi Mahatmyam (Chandi) scripture. Offerings to the ancestors are made in homes and at puja mandaps (temporary shrines).[9][10] Matamaha ("Mother's father") or Dauhitra ("Daughter's son") also marks the first day of the month of Ashvin and beginning of the bright fortnight. It is assigned for the grandson of the deceased maternal grandfather.[2][4]

The ritual is also held on the death anniversary of the ancestor. The shraddha is performed only at noon, usually on the bank of a river or lake or at one's own house.[4] Families may also make a pilgrimage to places like Varanasi and Gaya to perform Shraddha.[2][3][11] An annual Pitri Paksha Mela at Gaya on the banks of River Falgu. Pilgrims from all corners of the country visit Gaya for offering Pinda to their Ancestors. According to Bihar Tourism Department estimates, some 5,00,000 to 75,00,000 pilgrims arrive in the Gaya city during the Pitri Paksha Mela every year.[12]

Who and for whom[edit]
It is essential that Shraddha be performed by the son—usually the eldest—or male relative of the paternal branch of the family, limited to the preceding three generations. However, on Sarvapitri amavasya or matamaha, the daughter's son can offer Shraddha for the maternal side of his family if a male heir is absent in his mother's family.[2][4] Some castes only perform the shraddha for one generation.[2] Prior to performing the rite, the male should have experienced a sacred thread ceremony. Since the ceremony is considered inauspicious due to its association with death, the royal family of Kutch, the king or heirs of the throne are prohibited from conducting Shraddha.[4]

Food[edit]
The food offerings made to the ancestors are usually cooked in silver or copper vessels and typically placed on a banana leaf or cups made of dried leaves. The food must include Kheer (a type of sweet rice and milk), lapsi (a sweet porridge made of wheat grains), rice, dal (lentils), the vegetable of spring bean (guar) and a yellow gourd (pumpkin).[4]

The male who performs the shraddha should take a purifying bath beforehand and is expected to wear a dhoti. He wears a ring of kush grass. Then the ancestors are invoked to reside in the ring. The shraddha is usually performed bare-chested, as the position of the sacred thread worn by him needs to be changed multiple times during the ceremony. The shraddha involves pinda-daan, which is an offering to the ancestors of pindas (cooked rice and barley flour balls mixed with ghee and black sesame seeds), accompanying the release of water from the hand. It is followed by the worship of Vishnu in form of the darbha grass, a gold image or Shaligram stone and Yama. The food offering is then made, cooked especially for the ceremony on the roof. The offering is considered to be accepted if a crow arrives and devours the food; the bird is believed to be a messenger from Yama or the spirit of the ancestors.[2] A cow and a dog are also fed, and Brahmin priests are also offered food. Once the ancestors (crow) and Brahmins have eaten, the family members can begin lunch.[4]

Here is a list of Names of The Various Days:[13]

Other practices[edit]
Some families also conduct ritual recitals of scriptures such the Bhagavata Purana and the Bhagavad Gita.[4][14] Others may be charitable and present gifts to the priests or pay them to recite prayers for the ancestor's well-being.[14]

I Have A Cosmic Connection With Banganga 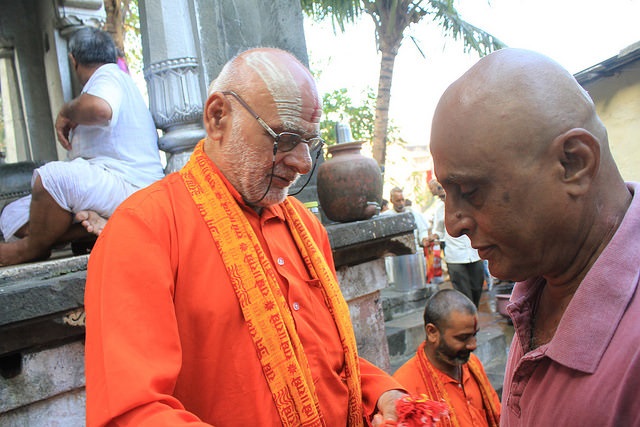 My childhood has been spent at Wodehouse Road Colaba , and it was once when I was very young my Dad bought me here to the Shoe House at Hanging Gardens .That was it.

I discovered Banganga as a photographer late in my 40s and the most memorable outing at Banganga was with late Prof BW Jatkar. and I fell in love with this beautiful Tank.

I came to know about Pitru Paksha  through the pictures of a friend Ranjit Shashank my PSI Club senior member and mentor I decided I would shoot it too.. and thus began my tryst with Banganga and Pitru Paksha.

And it became a ritual to shoot the Banganga Pitru Paksha every year ,  barefeet and from there come to Napean Sea Road Maheshwari House take the blessings of my Guru Mr KG Maheshwari House. And these subsequent Pitru Paksha I have not met my Guru for many years now .that is the only sadness while coming to  Teen Batti as this area is called .

And strange it may sound after shooting the barbers , the beggars , my first shot before entering the Tank is of this Pandit Maharaj.

He is a very nice kindly soul , but till date I never asked him his name nor does he know that I am a Muslim.. he treats me as a Hindu and I accept his feelings with humility and due respect... and than I move towards the Tank , all the ladies  men who sell the Puja articles know me , greet me ..this time all of them wanted to know why I did not come on 23 Sept  the main day of Pitru Paksha ..I told them I did not know about it ,, but I made it today that is 24 Sept ,, The rituals were ending at at about 9 Am,

I was lucky to shoot them and share them with all of you.