Muslim Kids Searching For Their Future 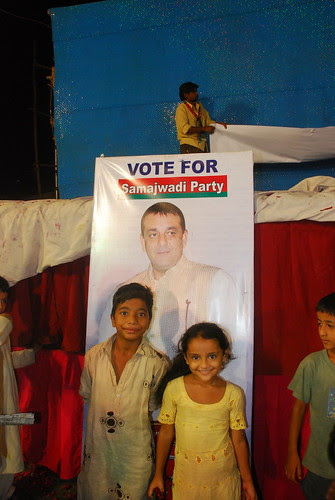 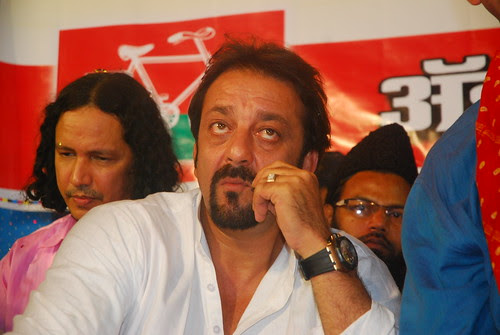 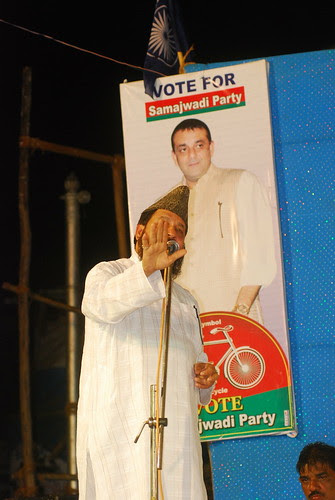 That Is Uncle Ashish Shelar She Says... 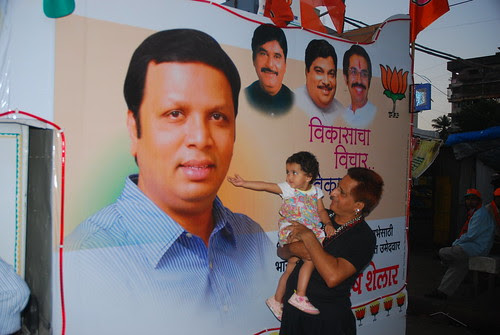 That Is Uncle Ashish Shelar She Says..., originally uploaded by firoze shakir photographerno1.

The Stunted But Powerful Muslim Vote 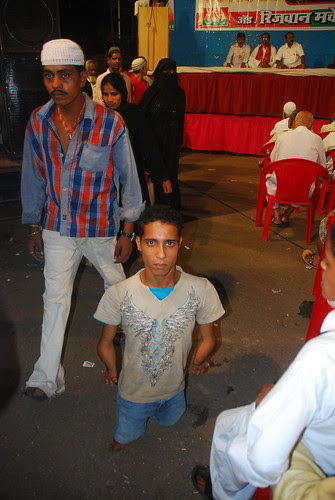 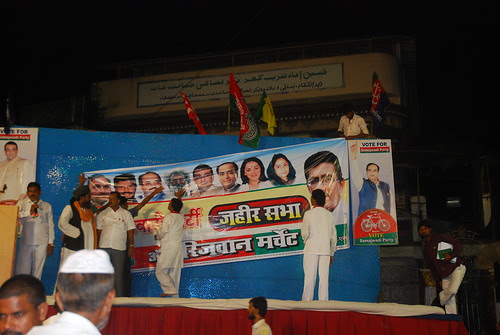 After I had shot the BJP Shivsena Rally , the BSP rally I was informed that Sanjay Dutt was to attend the Samajwadi Pary near Jamatkhana so I immediately rushed there shot these pictures but there was no sign of the star , I came home showered and returned to shoot Sanjay Dutt in absolutele political form in a new power punching avtar, he too spotted me in the crowds and asked me what I was doing here shooting pictures , I had done his costumes for Nitin Manmohans Chal Mere Bhai.. , he did not spare Baba Siddiki in his speeches.. and the Samjwadi Party considers the Congress I and the Democratic Front its greatest enemy and ..they bought in a Mullah who left no stone unturned to brand the Congress anti Muslim party and cited all the incidents that had affected the Muslims directly or indirectly when the Congress was in power..Some of the stuff was virulent and in bad taste by individual speakers , but truthful too, evoking the sad memories of the 93 riots the demolishing off the Babri mosque, the Shrikrishna Report, the encounter killings of innocent Muslims but than this is politics..and here votes will be divided via the two main Muslim contenders against the Congress party, by Rizwan Merchant Samajwadi Party candidate and Rahebar Khan Independent candidate.

Yes everything is being to corner the powerful Muslim vote by all parties , this area JJ Colony Nargis Dutt Nagar , Compund , Transit Camp , the various Muslim pockets holds the key to the elusive chair of politics...

Rizwan Merchant a cogent speaker head of the various Dargah trusteeships, also an advocate appealed to the pubic to give another Muslim a chance to lead them instead of Baba Siddiki..and he too cited cogent reasons citing the powerful politician builder lobby that had taken the Muslim slum dweller for a ride.. to make fast bucks , the builder and the politician hand in glove became richer - while the poor slum dweller suffered..as this is a powerful predominant Muslim locality ..they went out to appease their political cause and to highlight Abu Azim as the mass leader of the Muslims..The meeting ended before 10 pm the cut off time set by the Election Commission.

Yes the Muslim Vote certainly matters .. the poor brow beaten Muslim of the slum .. is overnight an important persona in this Human Comedy called Politics..

It was what I heard and saw , but shot impartially as a photographer documenting the angst of the people in the background of the assembly election fever..vote or dont vote the Muslim is caught between the devil and the deep sea.


But vote he must on 13 October 2009 .. the most important and significant right of his , he must cast his vote impartially , elect a responsible person to form a responsible government...he must forget that he is only a Muslim and as an Indian as a Mumbaikar of Amchi Mumbai remove all blinkers that misguide his thought his mind and his vision..

His vote can change all our destinies too.. 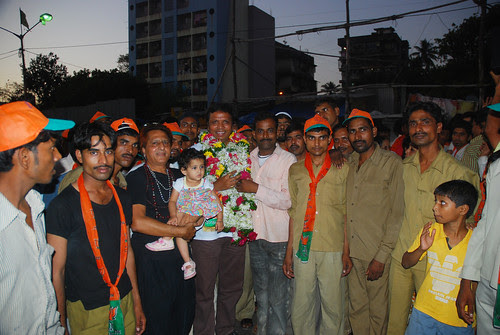 Vote for Ashish Shelar hum tumhare sat hain, these were the words that resounded from all sides as Advocate Ashish Shelar BJP/ShiveSena began his rally at Bandra Reclamation..from here it went through the Muslim pockets of JJ Colony and than Nargis Dutt Nagar and finally moved house to house at the Transit Camp..Marziya accompanied me , and kept shouting Vote for Marziya hum tumhare sat hain the last lines she had quickly memorized from the crowds..

I did not follow the rally into the Transit camp..but came back to drop Marziya...

Ashish Shelar is very fond of Marziya ..who is a friend of his son Omkar and plays with Omkar's pet Labrador Lucky