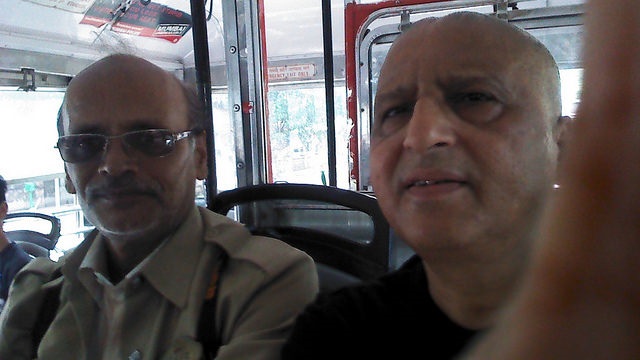 I met this humble soul when I took a bus for Shastri Nagar Bus Depot ,, Bus No 356 .

He sat besides me at close of our journey and we were talking about the heat humidity and a rainless Mumbai,,
Than I asked him how many kids he had  he said three , the eldest a daughter was doing her MBBS , and was going to become Doctor ,,he has two daughters one son and all his savings part of his Provident Fund he had utilized for the furtherance of their higher education.

And he is a migrant from Uttar Pradesh but he spoke chaste Marathi and had made Mumbai his home..

His name is Vaidya Panday  I think  as I am bad with names numbers , and I shoot stories of humility like this..

And in the bus you meet all kinds of people , drunks crazies, fighter cocks , nagging women waiting to get into a fight at the drop of a coin , but he has to remain polite cool and he is a Hindu, the guy who was driving the bus was a skull cap bearded Miya and both got along well .

As he was driving I could not chat up with him or tell you his part of the story..

Bu all in all these are clogs that Mumbai Mumbai .. Mumbai Meri Jan.

Email ThisBlogThis!Share to TwitterShare to FacebookShare to Pinterest
Labels: The BEST Bus Conductor

Shooting The Maha Kumbh Was Not About Pictures ,,, 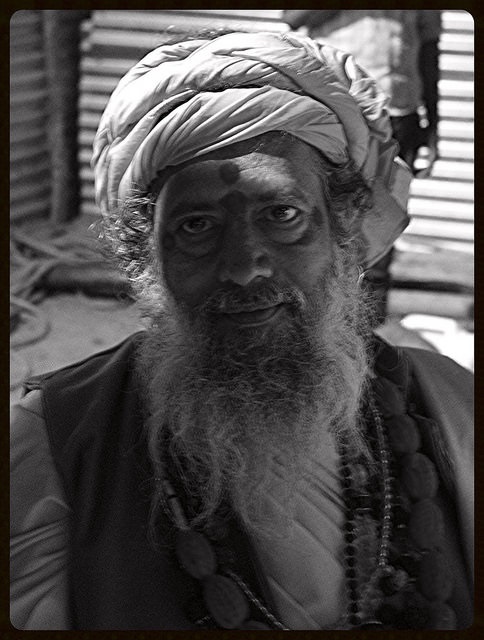 I had shot the Nasik Kumbh, but the Maha Kumbh was a different ballgame this was Uttar Pradesh I was miles away from Mumbai and this was a huge Kumbh that had come after 144 years ..

And the man in the picture made it possible for me , he made me a Sadhu tto shoot the Sadhus ,,he is the Naga Guru on whose invitation I came to absorb the cosmic colors of the Kumbh.

He is a teacher who gave up domestic life to become a Naga Sadhu born and bred in Karnataka he made the jungles his home at Flim City Mumbai.

He is an artist very good at drawing , he used to draw Muslim Holy Places on the floor close to Haji ali Dargah and earn alms , till a humble Muslim gave him Rs 500 and told him that people stamp on it and it desecrates a thought .. he stopped drawing completely.

He used to beg on the mountains close to Haji Malang but was robbed of his belongings , he saw tough life .. but he respects all Faith quotes from the Holy Koran.. and when I met at Nasik Kumbh his driver was a Muslim..

And I was the second Muslim to live with them at Trimbakeshwar.. I could not accompany him to the Shahi Snan at Nasik but we kept in touch and I like him , he came home met my family and a bond was created .

His name is Shri Vijay Giri Triveni of Juna Akhada he stays now at his Shanti Ashram at Santosh Nagar off Dindoshi Film City.

All these images , moments , feelings sentiments I have showcased are because of him , he did not want to leave at the Sangam as the cops were beating photographers , so I exited with him.. leaving behind a great photo opportunity with no regrets ..
Because of him I met the Sabapati, Maha Mandleshwars , and where he felt there would be animosity among some hardcore Hindu right wingers he introduced me as Ashok Bharti..photohrapher thinker poet.

He has not been well and the day we were leaving Allahabad in the heavy rains I carried his belongings on my shoulder and drenched to the bone got him access to the Allahabad Station they were not allowing people inside the concourse without valid ticket , I had a ticket and a Press Card so his entourage walked in and took a train for Mumbai in a challu dabba while I waited for my train that was late in the evening.

I have not met him , nor talked to him a long time now but we are cosmically connected , he will call me for the Nasik Kumbh ,, I know that and he knows it too.
By Firoze Shakir Photographer No1 - June 20, 2014

Email ThisBlogThis!Share to TwitterShare to FacebookShare to Pinterest
Labels: Shooting The Maha Kumbh Was Not About Pictures
Newer Posts Older Posts Home
Subscribe to: Posts (Atom)