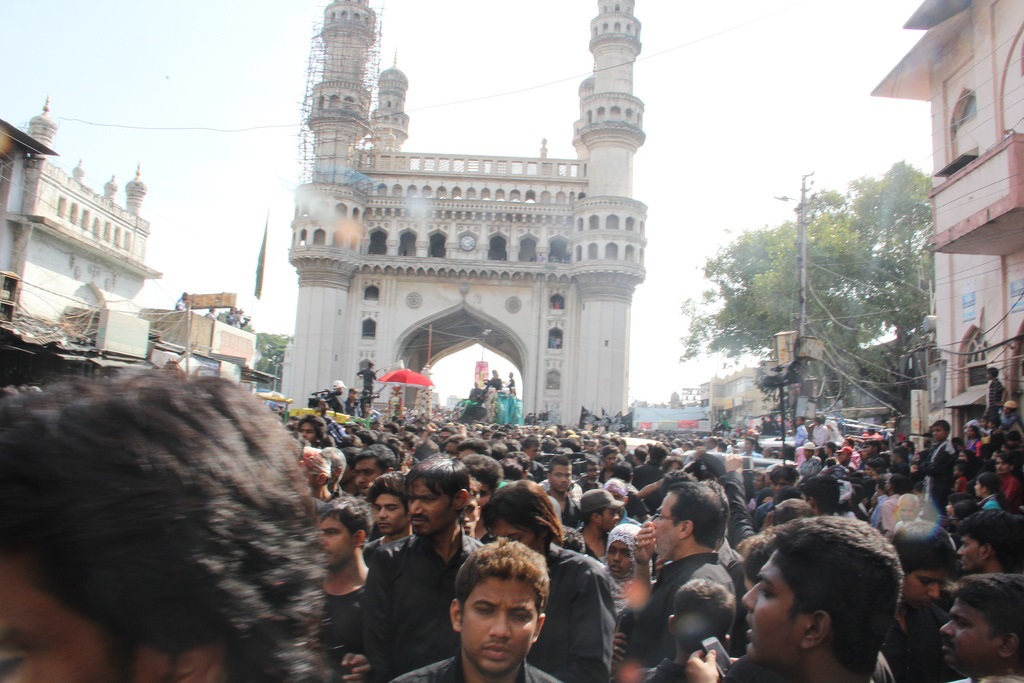 I needed to shoot Bibi Ka Alam at Charminar , but could not find a place to shoot it , and I am a short guy, there was no place I could climb, and I had left my friend Boaz with Sajjad Bhais relative , our priorities of  shooting Ashura were different , and I had to move on as I knew what I wanted , after standing on the road shooting this I rushed like a madman with Sajjad Bhai and his son to shoot Ashu Bhais hardcore kama matam and the sword matam, that is cutting the head with the Punjabi swords , I gave my camera bag to Sajjad bhai with my lenses memory cards and my dagger and I lost him in the crowds .

After I shot Ashu bhai in his narrow lane I moved ahead again but this time I was caught in a frenzy I requested a guy to give me his dagger and leaping in the air I cut my raw head again I fell down I was too weak, could not see straight with blood in my eyes they carried me on their shoulders took me to an ambulance to dress my wound ,, with water .

I was Ok now searching for Sajjad bhai my mobile phone was in my bag and I found Sajjad bhai after almost half hour , his relative was calling me as Boaz wanted to speak to me , but I could not go back I requested Boaz to let me move on I was here to shoot Ashura and so I walked barefeet , shooting Bibi Ka Alam wherever I found a strategic top location I found 3 or 4 and finally I shot Bibi Ka Alam at Azakhane Zehra and I decided not to go to Chaddar Ghat . the final destination of The Alam.

I shot the blade matam at Daru Shifa  had some light meal at Choti Bargah and crashed ..

I got up the next morning and went back to Irani Gully to meet Ashu Bhai but I met his son , I took a lot of street shots and than Naqi and Akthar dropped in a rick I was on my way to catch the Mumbai train.

I dont know if I will go back to Hyderabad , I have to hit new cities during Moharam.. I would like to shoot Ashura in Bangla Desh if I ca find someone who will sponsor part of my trip.