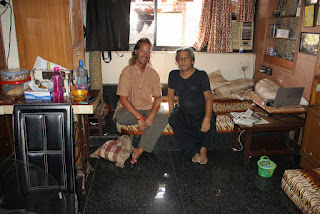 Shot by my wife

I got a message from Mathieu that he wanted to meet me and he was arriving from Montreal ..We met at Lucky Hotel over tea and he told me about himself ,, he is a professor in Montreal University and is writing a chronicle on the Hijras Of Mumbai.. he has had several long 6 hour interviews with the Hijra Nayaks and Hijra Gurus ,,he is writing a history more text few pictures ,, detailing their life struggle and their future ,.
As he was leaving the same night for Montreal I took him home from Lucky showed him my private documentation of the Hijras in India shot by me for last 20 years ... he was highly impressed .
He did not have lunch but is returning back from Montreal to shoot Haji Malang .. so I connected him to my dear friend who is one of the caretakers of the Holy Shrine .
And I told him those bigshots that have documented shot the Hijras have done nothing for the community ,, the poor in the hijra community are still waiting for God in Man to accept them as Women of Substance .
I normally deny access to people on social media if they try to ask me about Hijras,, I once shot them I still shoot them but all my images are marked private ,,
And I can say with sheer innermost humility nobody has ever shot the Hijra as humanly with respect dignity and dedication as I have .,.. but sadly in India the average Indian considers the hijras as a sex object and denigrates his poetry of life , his will to live humanly among humans and survive .
.
By Firoze Shakir Photographer No1 - January 25, 2016 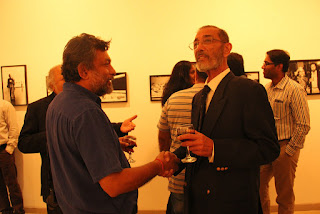 I consider Pablo the Cosmic God of the Camera ,, he is humble and highly gifted ,,This was his second exhibition in Mumbai I was attending ,,
A lot of celebrities photographers painters artists and Ad Gurus were there to felicitate Pablo who has a lot of nostalgic memories of Mumbai.
I shared some moments in the past with Pablo when I did a short stint at Mudra Communications doing Kabir Bedis Vimal campaign for Reliance ,,, as a fashion designer,,,and met Pablo who was closely associated with Mr AG Krishnamurthy .

This is my new set at Flickr of that special inaugural day of his exhibition on 22 Jan 2016 .