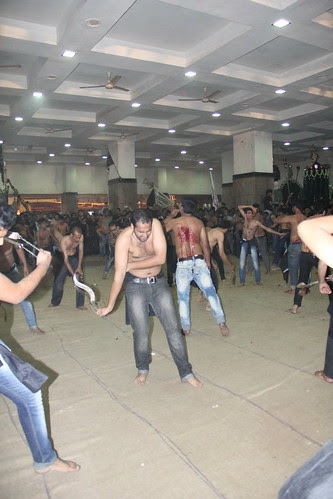 I Will Be In Another City Tomorrow Shooting The Spirit of Hussain, a photo by firoze shakir photographerno1 on Flickr. 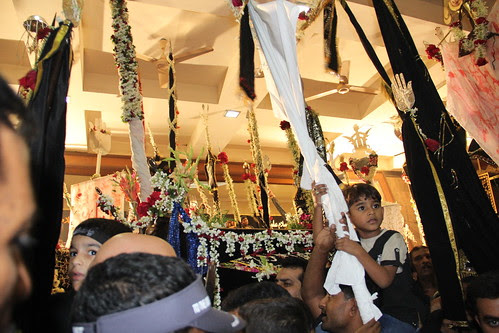 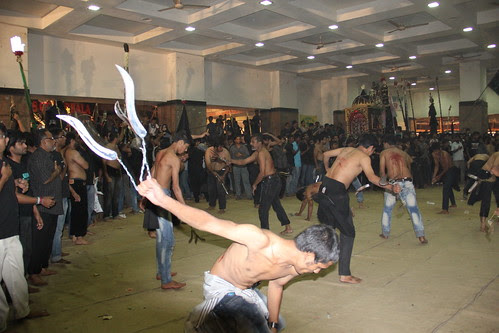 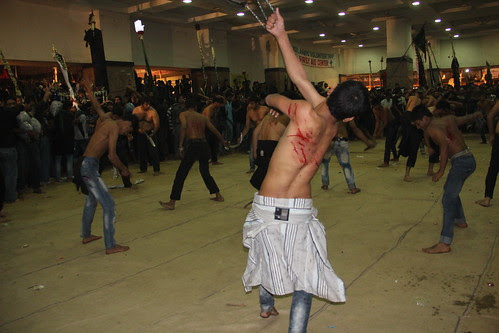 Ours Is a Protest In Blood Against Oppression Tyranny Which Exists As Yazidiyat Even Today, a photo by firoze shakir photographerno1 on Flickr.
By Firoze Shakir Photographer No1 - November 22, 2012 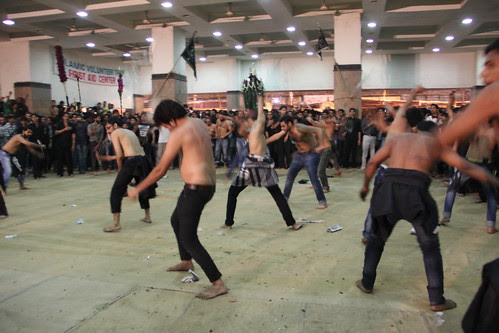 Please Teach Photography To Your Children To Keep Our Shia Heritage Alive As Blogs, a photo by firoze shakir photographerno1 on Flickr.

Within seconds the majlis floor becomes a arena for the matamdars, people disprese to the sides the alams and other taburakats take the round of the hall.. this end is the zanjir matam and to my other end closer to the podim the kama matam begins .. I normally in the very beginning shot from the raised platform now I shoot from ground zero but cautious and careful I wrong move and you cut be dangerously cut by a flying blade.

However this time after I shot the zanjir matam kama matam I went on the raised platform and shot the fervor ambiance ,,,

And I reiterate I shoot my Shia images for non Muslims my foreigner friends so they can understand the story of our pain, our faith as Shias you guys were born with all this and know it from your mothers womb I educate others about my Faith through pictures and this is not my attempt into spiritual semantics ,,

I shoot a storyboard on the screen of your mind heart and soul,,

I am not a professional photographer , I dont earn money as a photographer , this is my hobby I urge Shia parents to teach their children photography so our pain our culture can be shared by others.

That is why I taught my grand children from a very early age to shoot and today both Nerjis Asif Shakir 15 month old and Marziya Shakir 5 year old are accomplished photographers shooting both on Canon 60 D and Canon 7 D..

And this is the humility of my Camera .. it reaches where angels fear to tread.

I Have a Story To Tell 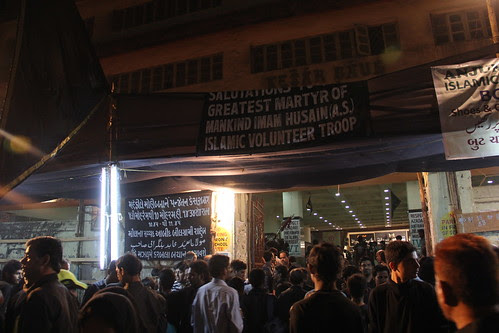 I Have a Story To Tell, a photo by firoze shakir photographerno1 on Flickr.

I was rushing to Mr Shatrughan Sinhas house in the daytime , and it was an urgent work as I was leaving for Delhi.. I could not get a ricksha so I walked out from Boran Road , I saw this old Muslim Man and he was real old , I told him either Juhu or 16 Road Bandra .. because I thought if I met my son in law I would go to Juhu on his scooter .

While the riksha drove the ricksha guy . told me that Sab Ka Maulh Hussain , Duniya Ka Malkik Hussain and began beating his chest with one hand ..I did not know he was a Shia he was wearing khaki.

And it turned out he was from Vakola and was just waiting to finish his chores and rush to town to give pursa or mourn for the Mother of Hussain.

When my son in law met me he came with the scooter I gave him the entire fare for Juhu , he deserved it.. he reinvigorated my faith in Humanity this simple man from Vakola.. he did not know me but he had sensed that the fragrance from my soul was the from the same garden where God lived .

I Give You Back Your Childhood Through My Pictures 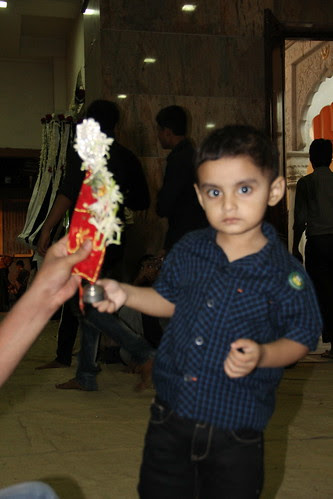 I Give You Back Your Childhood Through My Pictures, a photo by firoze shakir photographerno1 on Flickr.

And there is a story here ..the child has come with his dad he will carry his first alam at Kaisar bagh and I did not know .. only when I returned home I saw my son Saif , he had made his one year old daughter Zinnia Fatma carry her first alam for the first time at Kaisar Bagh.. and I realized I was shooting this memory for each one of you.

My other two grand daughters have the heritage of Lucknow Kazmaiin Nerjis and Marziya so their tapestry of Hussainiyat is very different from Zinnia Fatima whose heritage is Mumbai.

So I shoot kids and give you back your childhood... every moment that you spent from 1 Moharam to 9 Moharam at Kaisar Bagh...

And I did not have this childhood sadly I was bought up at Wodehouse Road no elder brother no uncles , a busy dad who would bring me here .. I discovered Kaisar Bagh in my teens .

For me as a Lucknow born Shia living in Mumbai since 1 year old it was Imamiya Masjid Moghul Masjid , Babaraly Mambada and the Imamiya Sabil that was founded by my dad Mohomed Shakirs uncle Maqbool Bhai Zariwala ..

Till the time my dad was alive the Fakhe Shikani dal chawal was made by my father ..for the mourners of Imam Hussain. 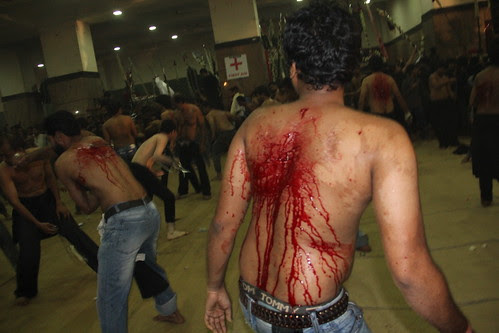 This is my new set at Flickr.. 6 Moharam at Kaisar Bagh .. shot tonight ..

I was to leave at midnight by the Dehradun Express to shoot Moharam Ashura in Delhi with my gifted nephew ace photographer Adnan Abidi but last minute I did not get a seat so I have aborted this trip and shall leave for another city tom...if I get the ticket .
In the mean time I shot eve of 7 Moharam at Kaisar Bagh. tonight....Martyrdom of Hazrat Qasim son of Imam Hassan.. in the Battle of Karbala.
I keep my Chhath documentary on hold ..till after Ashura.

So I will post whatever I can before I leave tomorrow to shoot the Spirit of Hussain in another city for me Hindustan is my Karbala I do not possess the cosmic luck of my wife she is called to Karbala every year ..

I came barefeet and shot Kaisar Bagh met people of my community , Mr Moeb Nasser a good friend Bandraite , Mr Safdar Karmali the finest humble Shia soul who leads from the front .. helping others for Hussain.

I am not much a text man my visuals tell the story of my faith..

Today is the eve of the Martyrdom Of Hazrat Qasim ibne Hassan..

When Imam Hasan's brother iMAM Husayn prepared to leave Medina in 670, Qasim's mother Bibi Umm Farwa asked Imam Husayn to take her and Al-Qasim with him.Imam Husayn agreed. Qasim, although only 14 years old, had, like his cousins, Aun and Muhammad, who were his aunt Bibi Zaynab's sons, learnt fencing from his uncle Hazrat Abbas and his cousin Ali Akbar. He took part in the battle of Karbala, in which he was martyred. Before the Battle of Karbala, on the 9th day of Muharram. Al-Qasim was married to Imam Husayn ibn Ali's eldest daughter, Fatimah Kubra bint Hussain, who was 11 at the time. It is said that Imam Husayn made a promise to his brother Imam Hasan that he will marry his daughter to his son. Therefore, knowing that he was going to die, he arranged the marriage before the day of Ashura to keep his promise. On the day of Ashura, Al-Qasim, like other cousins before him, was eager to fight for his uncle whom he loved dearly, so he went to his uncle to ask for permission.Imam Husayn would not permit him because he was so young and could not bear the thought of anything happening to him, so he did not permit him. This went on for many times until Al-Qasim gave up and went to the tent his mother was in. His mother was very upset to see her son like this so she gave him a letter that Hasan had written for his son before he died. She gave Al-Qasim the letter. In the letter it was written, "My son Qasim, a day will come when my brother Imam Husayn will be facing an enemy army of tens of thousands. That will be the day when Islam will need to be saved by sacrifice. You must represent me on that day." Al-Qasim read the letter and rushed to his uncle and gave him the letter. After reading the letter Husayn said, "O my brother's son, how can I stop you from doing what your father wanted you to do? In the Name of Allah, go! Allah be with you!" When he got up on the horse he looked like a shining moon. Al-Qasim was a very handsome boy. When he went to the battle field, he fought with all of his strength and killed a lot of the enemies. But, he was only a boy and was thirsty for three days due the blockage of the river by Yazid I and his army. A man came from behind and hit Al-Qasim with his sword to which he fell and cried aloud, "O, dear uncle, peace be upon you" Husayn rode out upon hearing this. The soldiers tried to stop him, when finally he came to where Al-Qasim had fallen. He saw Al-Qasim's body trampled to pieces by the horses of the soldiers who had tried to stop them from reaching to their nephew. When the time came for Imam Husayn to take his nephew's body back to the tents he took off his aba, spread it on the ground and picked the pieces of the body up as one would collect flowers from a garden.

I am Now Keeping My Chhath Puja Uploads On Hold 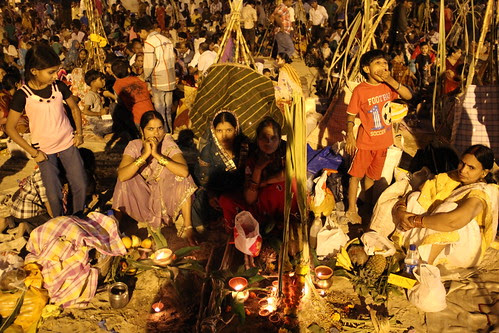 I am Now Keeping My Chhath Puja Uploads On Hold, a photo by firoze shakir photographerno1 on Flickr.
By Firoze Shakir Photographer No1 - November 22, 2012

Photography Is Shooting The Silence of a Heartbeat 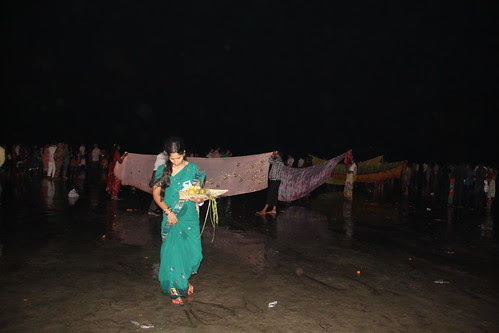 Photography Is Shooting The Silence of a Heartbeat, a photo by firoze shakir photographerno1 on Flickr.
By Firoze Shakir Photographer No1 - November 22, 2012 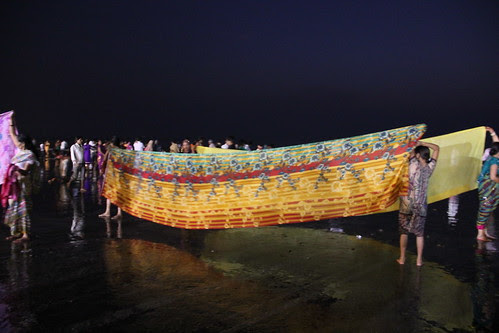 Juhu Beach..Where Gods Come To Repose .., a photo by firoze shakir photographerno1 on Flickr.
By Firoze Shakir Photographer No1 - November 22, 2012

I Can Do Without Art But Not Without Culture 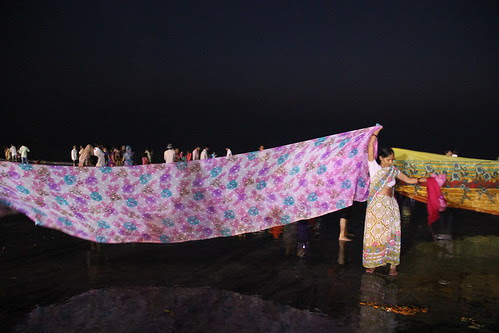 I Can Do Without Art But Not Without Culture, a photo by firoze shakir photographerno1 on Flickr.
By Firoze Shakir Photographer No1 - November 22, 2012