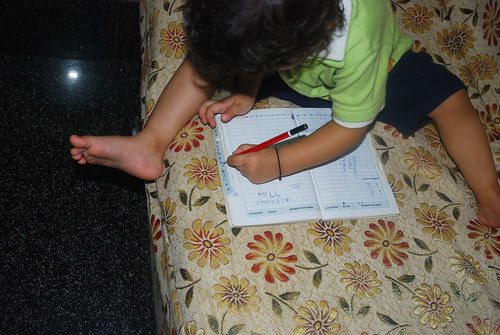 I did not plan to write what I wrote below when I posted this picture of Marziya my studious writing loving grand daughter , the look in her eyes bought forth words , Marziya does not go to school yet but her surroundings are school enough..the visibility of the unseen is what she sees ..
There is another picture of her I could never shoot , but will describe it to you, imitating the elders in the house she will pick up a book hold it in both her hands and will begin reciting a noha, than she will balance it in one hand and beat her chest with another hand - we call this matam e hussain.

I shot all these pictures while the house was watching Big Boss and Marziya went about her writing work , and a thought did come to my mind , how can Bakhtiyar and Tanaz Irani leave a 18 month old child to go and live in the house of Big Boss.. How could Big Boss even think of having both of them as contenders beats me this is child abuse and the silent voyeuristic soul of the nation watches it without raising a voice..I am a grand father a day without Marziya kills me..

Money , Glamour Glitz Amitabh Bacchan nothing can be bigger than a childs love for the parents and if Shanti Bai is bringing the child up like Bhaktiyar said than curse the mothers womb that gives birth to a child..

This was shot an year back during the Nikah of my son Saif Shakir, the monsoonal showers lashing the soul of Mumbai have made me nostalgic..time has passed and Marziya grows older and wiser.. today she was with me for a political rally of Independent candidate Rahebar Khan , and did not hesitate to shoot him in the rains..

I had long hair but had decided to cut it off after Moharam..the blood stains on my artificial blond hair looked weird..I cut my head twice an year once during Ashura and again during Chehlum..40 day of Moharam.

I had also planned to pierce my cheeks with an 18 feet rod during the Maryamma Feast at Mahim but kept it for next year ..if Glenn Losack is around to shoot me..