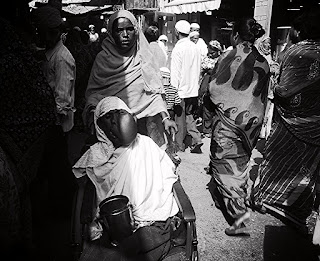 In my short life as a photographer , I have shot hordes of beggars , but this lady killed my insides the first time I saw her while climbing the mountains barefeet to meet Malang Baba Wahid ,, I took a hasty shot of her , she was in a group that lives in makeshift tents at the mountain foothills ,,
And this was in the dargah lane ,here at Ajmer I think in humility I am the only one shooting the captive souls in wicker baskets , because I cannot afford to buy these souls I shoot them ..I can not sit compose my shots of beggars ,, with the crowds moving in it would be a stampede .and till date no Rajasthani cop has ever provoked me dressed as I am they think I am some crazy Sufi Bawa ,,and than being barefeet I look like a beggar with a stolen camera round my neck.. In Mumbai they would have locked me up as a suspect ,, beaten the shit out of me to tell them where I stole the camera from ,so I wear a press card ,, Internet Photographer No1 and as I dont have a car the cops cant catch me and give me breath inhaler test...
Well back to my beggar lady with two faces , after I shot her a few years back I never saw her again..the only beggar and Ibeg with him at Dhai Djinn Ka Jhopda , waits for me eagerly if I sit next to him , people give us both about 700 to 1000 bucks all crumpled Rs 100 notes .. this time I gave him my only beggars bowl too, he said it was lucky and he added he could never afford a beggars bowl, this beggars bowl, was given to me by a bawa ..I carried on my shoulders for a short distance at Haji Malang ,, I did not want to take it , but he said Keep it we are beggars ,,,under the shut eyes of the Lord..
So life has been a great adventure without going to the Niagara Falls , or Ladakh and all those tempting places in Switzerland ,, but I would die of thirst of life if was to shoot a landscape without beggars ,,I Co exist with beggars , I maybe a slight notch above the beggar on the street , but the day I die I will be looking worse than a beggar with nothing on me ,, just a jute gunnybag.. and the road leading to a Hospital to rest my bodyparts to be given to beggars I shot to inherit their humility and their simplicity .
And this is a blank post at Flickr I realize I blog better on Facebook .. because I know the faces of those who read me , and even those who read me with their eyes closed ,, yes my picture tells the rest of my untold story. 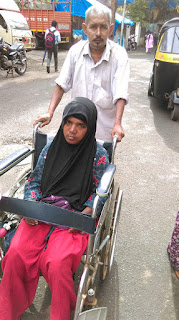 For those of my Friends who dont understand the description of my title in Urdu ..it simply means succinctly that when Ramzan comes it brings hope in the hearts of Beggars .. and here in Mumbai a Muslim beggar is a Muslim beggar , we certainly dont ask them are you Shia or are you Sunni.. this is the beauty of culture etiquette in Indian Islam which we call Adab Tehzeeb.
..Islam is certainly not the same from one continent to the other ..
I will explain that later , and it has nothing to do with my being a Shia I am proud to be an Indian and I am humble as a Shia the Shia was born with Humility inherited from Hussain and Pride was the only essence that crushed Yazid ,, we remember him always but only as accursed , when hear of Shia s killed during Ramazan.
And you cant blame Saudi Arabia for getting ivolved with the Yemen conflict , they had to enter the arena simply to use their American bought weapons that would be obsolete , and honestly , Saudi dont have the balls to fight Israel,, so this was the best opportunity to kill Shias .. and this is the Imperialistic Hegemony backed by America or any other world power I am not into politics and this is not a political blog this is just my assumption..the ISIS monster was created by the Saudis and one day soon it will land in their backyard too.. having used most of the weapons in Yemen.. they will have nothing to fight the ISIS .. and than America will send them ground troops and help the Salafis ,,.
I am ashamed of being called a Muslim , simply because the Muslims today are not the Muslims of yore ,, Imagine killing persecuting Shias and other minorities foreigners in the Holy Month Of Ramzan .. Yes Muslims love killing Muslims during Ramzan like gluttons , bloodthirsty animals ,,I call myself an Indian and India is my Karma and my Dharma ,,
I identify with the Shias only through Hussain..and my Shiasm is my personal prerogative ,we may be Shias but than if you are from Pakistan our mindset will certainly not be the same at all.. my roots my branches and fruits are all purely Indian..Even my Karbala is Indian.. so this is what I wanted to say ,, we condemn oppressors , we condemn Terrorism , Oppression , but those who strongly support Salafi Islam are happy seeing us killed murdered ,,this is the way of the World and everyday is Karbala it still bleeds in every Shias heart .. and he celebrates Ashura each time you plant a bomb in his Mosque and bleed the pages of the Holy Koran..
A poem would be too frivolous way of remembering an act of dastardly cowardice ,,
ALLAHUMMA LANATA QATALATA YA HUSSAIN AS WA AULAD IL HUSSAIN AS WA ASHAB IL HUSSAIN